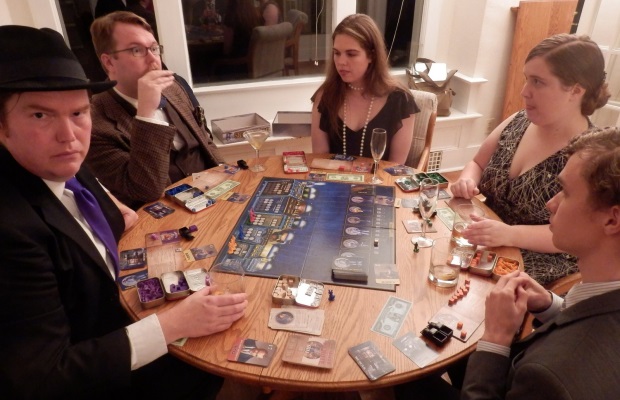 The title of this review is a quote from Alphonse Gabriel Capone, leader of The Chicago Outfit. Al was a “businessman” specializing in the distribution of beverages of an intoxicating nature. This was the era of Prohibition. Thanks to the wet blankets and bluenoses of the era, the manufacture and transport of liquor were forbidden by law. In Mayday’s BOOTLEGGERS, you and your opponents are entrepreneurs, “just giving the people what they want” (another Capone quote).

It ain’t easy being the biggest boss in this town. The mobster who flexes the most Muscle gets first pick recruiting Men of Action and the first stab at influencing the speakeasies. The mobster with the most influence earns oodles of cabbage. Your job is to make sure that you are the mobster with controlling influence. Then it’s time to fire up the stills and sell your whiskey to the speakeasies. If you know your onions, you can make a lot of dough. But if one of your boys were to suffer a tragic accident, like death by LEAD POISONING, that’s just the cost of doing business.

“They pull a knife, you pull a gun. He sends one of yours to the hospital, you send one of his to the morgue. THAT’S the CHICAGO way.”

I have never played a game where the mechanics and components so lovingly invoke a unique period in American history and a distinct film genre. My friends and I are keen on the 1920s. When we’re not gaming, we dress up in vintage clothing and go swing dancing to the same music the mobsters were listening to. The revival of Speakeasy culture in Seattle (at bars like Canon Whiskey & Bitters Emporium and Bathtub Gin & Co.) has fueled my interest in pre-prohibition cocktails. I like to host Prohibition themed parties built around this game. We dress up in suits and fedoras, no one gets in without the password, and I serve a round of Manhattans. Try to imagine an Agricola themed party. Everyone dresses like a German peasant farmer, we serve lamb and carrots with bread, and NO SMILING ALLOWED.

The three-act plot structure of a gangster movie plays out in a 12 round game of BOOTLEGGERS. After the 4th and 8th round, mobsters divulge how much cash they have. If you’re in the lead, you end up with a big target on your back. You can pick up a powerful Thug card early in the game, like “G-Men Bust a Shipment” or “Mob War.” If you don’t use it right away, you can save it for a pivotal moment at the end, like the well known plot device Chekhov’s Gun. When a bunch of aggressive Thug cards come out, you know a climactic bloodbath is coming. A game of BOOTLEGGERS is full of tension and excitement, just like you get from a thrilling mob movie. The immersive theme gets you to role-play as your favorite Hollywood gangsters.

WHAT’S INSIDE THE BOX

The board has six Speakeasies where you sell your giggle juice, with plenty of room for the plastic mini trucks to line up outside. Each player (up to 6) gets:

You’ll need a lot of ziploc bags or Altoids tins to keep everything together. The general supply includes:

And by “bribe”, I mean “hire on the open market.” Actual whiskey not included.

Note: This is a 2013 revised edition of a 2004 game from Eagle Games. Mayday added more money and a few Thug cards. The Kickstarter promised a set of colored dice for each player and a set of white dice for the Speakeasies. I guess the white dice “fell off the back of the truck” because I didn’t get any. Mayday also revised the rules, but a few editing mistakes crept through. Don’t worry your pretty little head about it, though. It’s just small potatoes.

“I have spent the best years of my life giving people the lighter pleasures, helping them have a good time, and all I get is abuse, the existence of a hunted man.” – Capone

There are lots of paths to victory. The Men of Action cards drive your strategy, and you can use each type of card in a couple different ways. If you focus on Still Improvements, you can sell your extra hooch to the other players, or deliver it to the gin joints yourself. If you build up a fleet of Trucks, you can rent them out to other mobsters, or buy up their extra whiskey. If you go after the most Influence, you can make big bucks off the moonshine the other mobsters sell, no matter how much you sell yourself. If your game is to hire Thugs, you can shut down the other mobsters’ Stills, steal their Trucks, or bust their Speakeasies. If you’re persuasive, you wont even have to send out your Thugs. The mere threat of a Thug lets you make offers that your opponents can’t refuse. 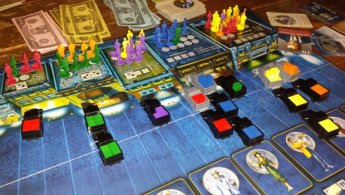 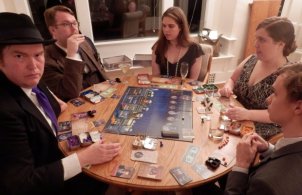 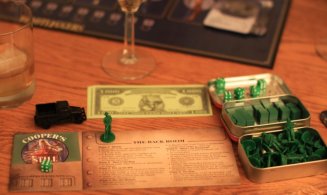 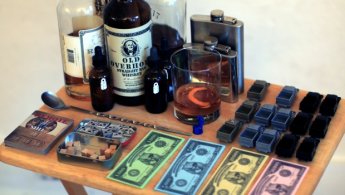 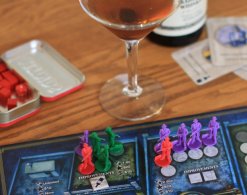 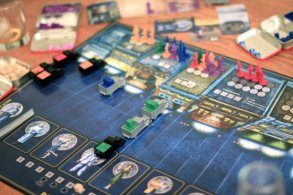 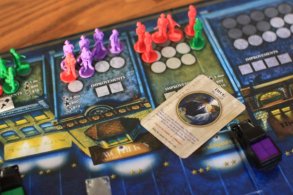 BOOTLEGGERS avoids the rich-get-richer effect of other economic games. Money is like the “MacGuffin” in an Al Hitchcock picture. It motivates the characters, but doesn’t affect the plot. Money acts as the game’s Victory Points, but it isn’t used to generate other resources. Contrast this to Settlers of Catan, where settlements & cities give you a leg up in both VPs and resources. At almost no point are you limited in what you can do by the amount of cash you have.

The intensity increases as the game goes on. You can be in last place in turn 8 and still pull off a victory in turn 11. The game can be swingy, not because it is random, but because the Speakeasy payouts are more lucrative as the game progresses.

The area influence mechanic at the heart of the game is like El Grande with some clever twists. Influence markers (gangster minis) are scarce, and taking them comes at a cost. Taking a Men of Action card that gives you Influence means that you’re not taking a Thug card or an extra truck. The benefit of having the most Influence in an area isn’t predetermined, like in other area influence games. Being top dog in a Speakeasy gives you the opportunity to sell there, but it’s no guarantee that you’ll be able to produce enough whiskey, much less deliver it.

“Some of the best judges are on my stuff.” – Capone

Manipulating Influence is a great way to futz around with the other mobsters’ plans. The Muscle cards you play each round establish turn order, but the Speakeasies buy whiskey based on Influence. Influence trumps Muscle when it comes time to collect the cash. A few Thug cards, like “Safe-house” or “You Dirty Rat” screw with the balance of power in the Speakeasies, and make for exciting late-game plays.

This is particularly true if your friends are creative when it comes to making deals. Early in the game, I might offer you 5 G’s to play your “Hijack” Thug on some other guy. He will only lose a couple G’s, which makes this look like a chump move on my part. But my real motivation is to keep you from Hijacking ME later on. A buddy of mine who played back in 2004 remembers simple deals. “Pay me or I’ll play my Thug on you.” Today’s gamers are more innovative when it comes to extorting, sniping, or screwing over the other mobsters.

To come out on top, you gotta be patient! If you come out of the gate guns blazing, everyone else will gang up on you. You need to spend the first two-thirds of the game setting up for a third act power play. The most important skill in the game isn’t negotiation, it’s timing. I’ve lost games by waiting too long to make my move, and I’ve blown a potential win by playing my “Big Payoff” card a turn too early.

BOOTLEGGERS is the cat’s pajamas when played with a group of 5 or 6, but with only 3 or 4 the game is all wet. Fewer Men of Action cards come into play, not as many Speakeasies open up, and there isn’t as much to negotiate over. The rules include a shorter, 8 round variant for 3-4 players. Don’t bother trying it – it’s as clammy as a cold fish.

“All I do is satisfy a public demand.” – Capone

Seldom have I seen a game’s mechanics, components, and theme mesh together so well. Fans of mobster movies who want to vicariously live life on the wrong side of the law need look no further. There are only a few gangster games with a strong theme, and BOOTLEGGERS is the best of them all.

Eurogamers who tend to avoid games that rely too much on chance might flinch when they see all the dice. This would be a mistake. Your skills of bidding, placing influence, and negotiation are responsible for the outcome. The dice might have it in for you, but that won’t keep you from coming out on top.

This isn’t a good choice if there are any softies or pushovers in your group. All the sniping and back-stabbing can be too aggressive for those with delicate sensibilities. The rules allow reneging on your word. If you want to two-time the other guy or feed him a line of phonus balonus, that’s your business. In all my games of BOOTLEGGERS, this happens once in a while. Playing with the Diplomacy crowd would make for a more treacherous experience.

This is also a poor choice for gamers who prefer mathy, Reiner Knizia-esque puzzles. You can crunch the numbers before every major decision if you want, but that would be as much fun as watching a version of The Godfather where Robert Duvall (the lawyer) plays every role.

Bottom line: BOOTLEGGERS sets the bar for mobster themed games. With 3-4 players it’s not quite the bee’s knees, but with 5-6 it is THE ELEPHANT’S ADENOIDS. It is a huge hit at every table I've played with, even for players who don’t like negotiation games. The game combines a solid Eurogame economic engine with Ameritrashy negotiation/extortion. Add in an engrossing theme, and you have a modern classic.