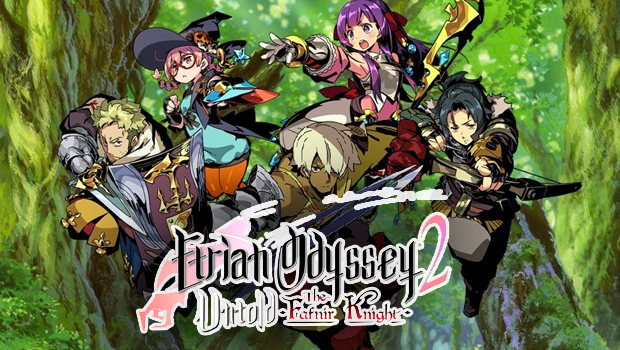 One of the best things about the 3DS is its wide and ever-growing library of JRPG’s. This new release of Etrian Odyssey 2 Untold: The Fafnir Knight adds to the handheld 3D Nintendo system’s long line of great games. It features the same polished and elaborate gameplay as previous titles in the series, while also utilizing some of the 3DS’s more unique elements. But as fun as this game is to experience and as mentally stimulating as the fighting system is to control, there are certain aspects that still come off feeling clunky or slow paced.

Etrian Odyssey 2 Untold: The Fafnir Knight comes from a long line of respectable RPG titles, the most recent being Etrian Mystery Dungeon, also for the 3DS system. Both of these titles share a similar navigation and battle system; the main difference is between this game’s first-person perspective and Mystery Dungeon 2’s top-down third-person perspective. At first, I wasn’t a fan of the jolted, jerky and grid-like first person movement in this game, but I quickly got over it as I grew more familiar with the controls.

One of the most interesting features that may take some time getting used to involves the use of the 3DS’ bottom touch screen. A significant portion of the gameplay requires the use of the stylus pen to mark/draw the map as you move through the dungeon. This is one of the mechanics that I had the most trouble getting used to. I eventually became frustrated and impatient with the task of drawing my own map, something that I’ve long since come to expect to happen automatically after years of playing metroidvania games. However, I do appreciate the attempt at breaking up the pace of the gameplay by trying something new.

My biggest complaint is that, similar to Etrian Mystery Dungeon, the story is almost non-existent and entirely uncompelling. After selecting your main character’s name (the one who will become the legendary Fafnir Knight), you are quickly paired up with your core companions. Flavio is a childhood friend from your character’s academy, and Arianna is a Princess who is the key player in an anciently prophesized ritual designed to rid the world of monsters. If this story sounds familiar in any way, don’t be alarmed – it’s probably just because you’ve played one of the hundreds of other JRPG’s that uses a similar plot line.

The biggest issue with Etrian Odyssey 2 Untold: The Fafnir Knight, is not that it isn’t fun to play or clever, it’s that it doesn’t bring anything new to the table. There may be someone out there who has faithfully enjoyed every minute of the Etrian Odyssey series and that person would feel right at home playing this latest title. However, for most, I’d say if you’ve played one Etrian Odyssey, you’ve played them all. This is essentially the same gameplay as previous titles, with some minor sprucing and new story elements. I suppose, if it aint broke, don’t fix it. Everything from the past that made this series noteworthy has been maintained, making this an excellent entry point for anyone new to the series. Just don’t come into this after playing previous Etrian games expecting something new.

One recommendation I will extend is that you not waste your time playing the game on the easiest difficulty setting; unless of course, you enjoy defeating every enemy without strategy by holding down the basic attack button. The gameplay is the showcase, so if you want to enjoy the bulk of what this game has to offer, you’ll need to raise the difficulty to either the middle or hardest setting.

All in all, this is another solid JRPG from Atlus games, and a welcome addition to the 3DS’s library. Although the tedium of extra screen tasks such as mapmaking and the lackluster story may do a disservice to the overall pacing, the intricate gameplay and strategy focussed battle system make up for the majority of its missteps.

This game is recommended to anyone who is looking for an engrossing, time consuming and intricately detailed JRPG to sink their teeth into. What it's lacking in story and character development, it more than makes up for in strategy based gameplay.

Stefan started gaming the day his dad brought home a shiny, brand new commodore 64. He's been hooked ever since. Whether he's leveling up his ninja in Final Fantasy Tactics, cruising the streets of San Andreas or working on his Terran build order, videogames are never far from his mind. He is currently on the lookout for an appropriate 12 step program to address his electronic addiction.
Related Articles: Etrian Odyssey 2 Untold: The Fafnir Knight
Share
Tweet
Share
Submit