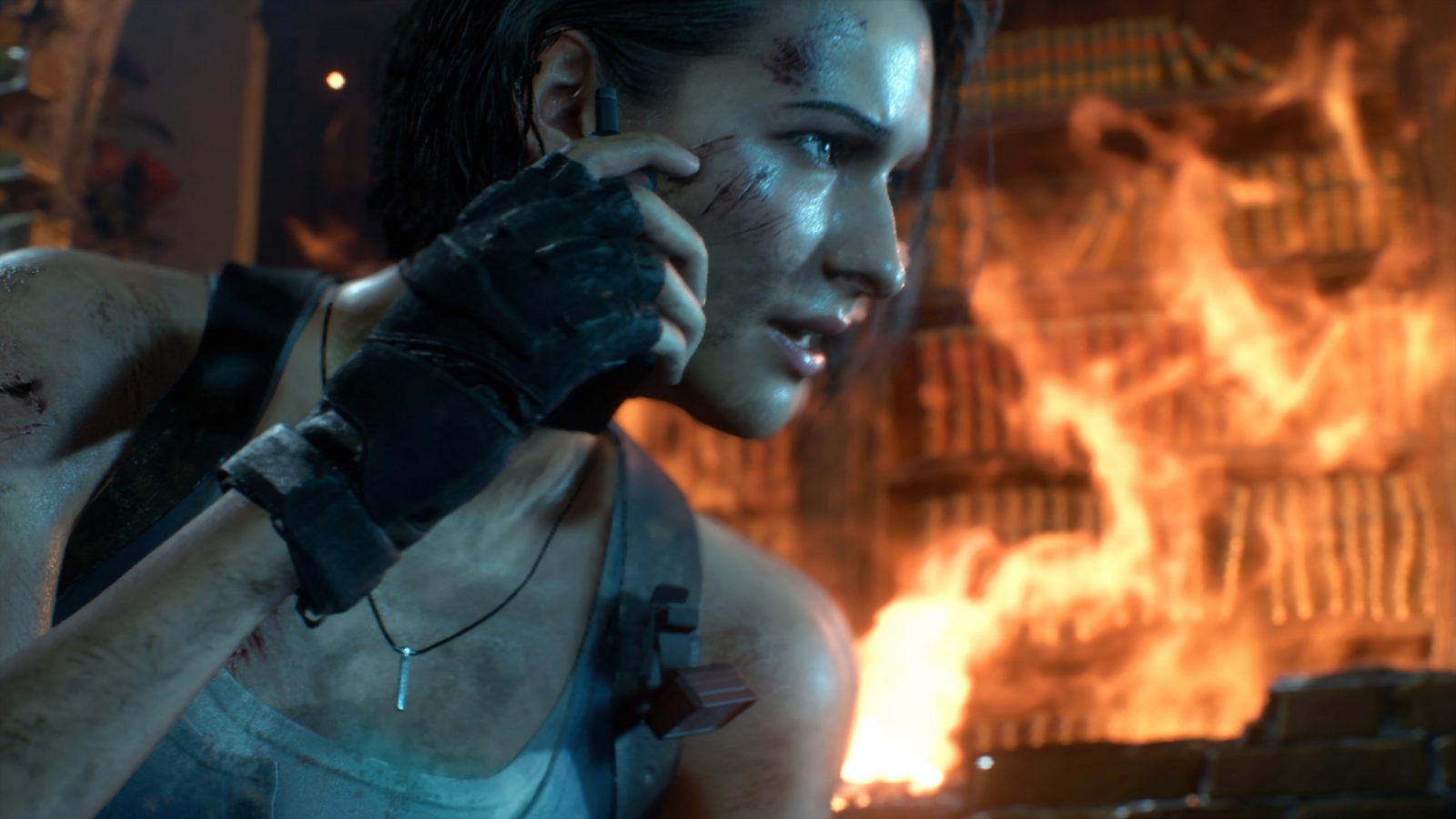 Resident Evil 2 was easily one of my favorite titles of 2019, and that’s not just because the original Resident Evil 2 was my favorite in the series. It took a classic and evolved it, improving on the story and gameplay while creating a genuinely terrifying experience filled with helplessness, despair, and occasionally surprise. Just a little over a year later, Resident Evil 3 follows in its footsteps, first figuratively and then literally while bringing along a new multiplayer take on the franchise with Resident Evil Resistance. 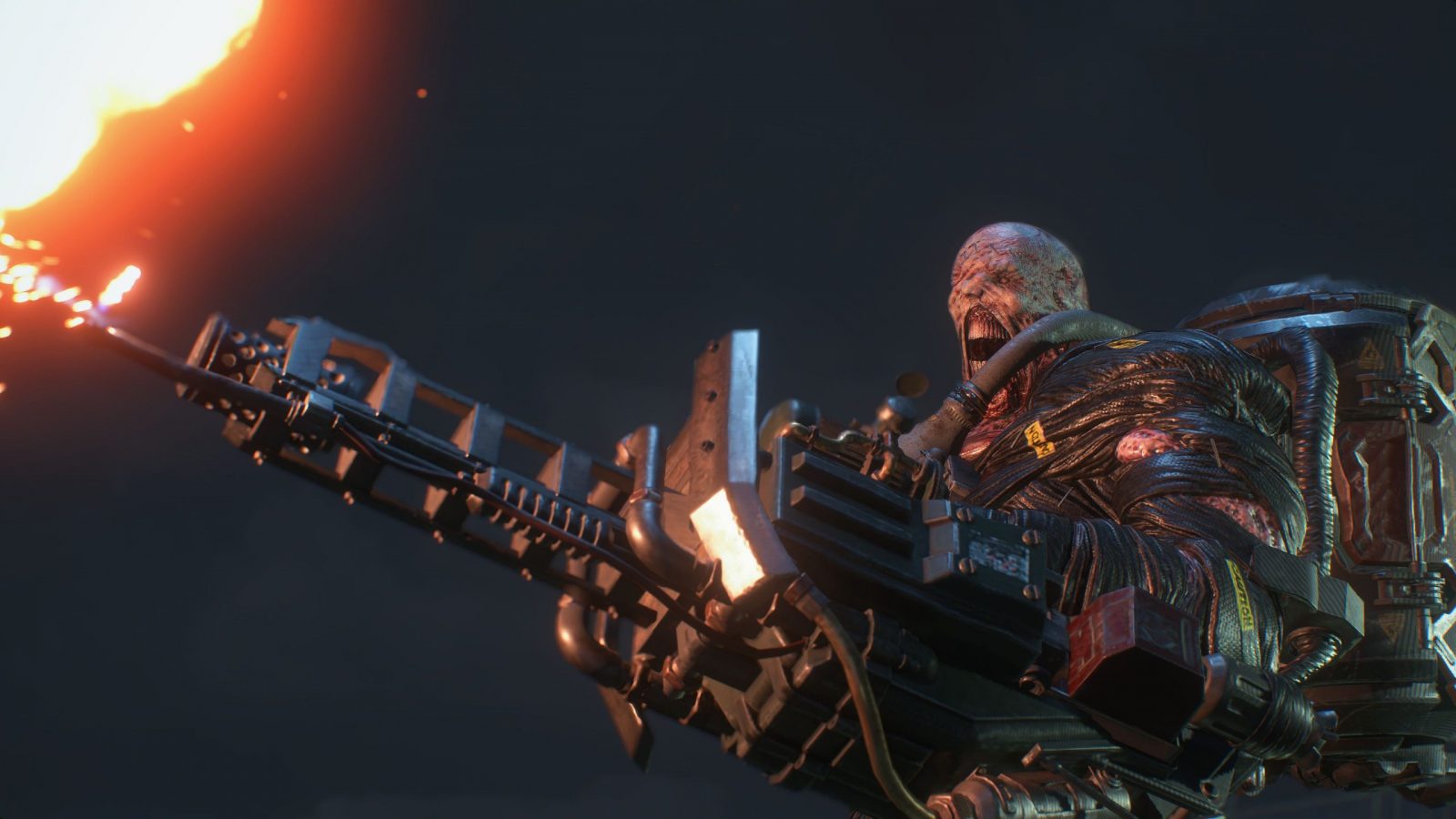 Back in the day, Resident Evil 3 was probably the game I played the least of the original trilogy. It played similar to Resident Evil 2 while adding a new dodging mechanic. Interestingly enough, the changes between both remakes are eerily similar, as the biggest change mechanically to Resident Evil 3 is the ability to dodge, which is something I didn’t know I needed. When a monster lunges at you, if you dodge perfectly, you have a brief window where you will automatically target their weak point and can fire upon it. This creates plenty of satisfying situations and leads to boss fights more fun than Resident Evil 2’s.

The original Resident Evil 3’s biggest focus was on the Nemesis, a beefed up Tyrant with more intelligence, more resilience, and weapons. Every encounter with him in the original game was terrifying, and he always had a new way to surprise you. If you thought the Tyrant was intimidating in the remake of Resident Evil 2, the Nemesis brings a new layer of horror, constantly pursuing you through corridors in Racoon City. 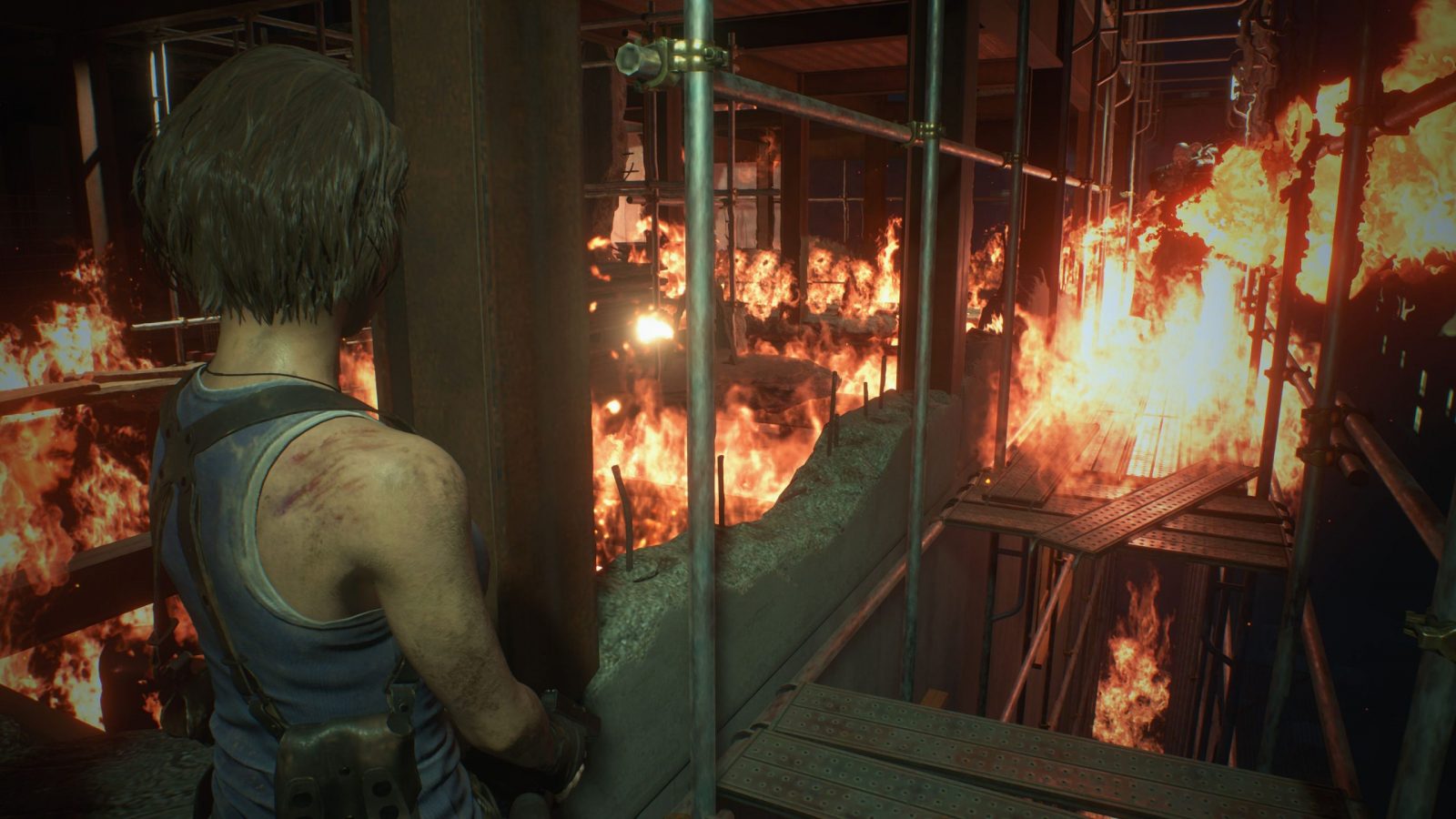 These chases prove two things: Nemesis is a terrifying pursuer and Jill Valentine is a grade A bad ass.

But, as terrifying and sometimes satisfying as these chases are, they showed me the main problem Resident Evil 3 has: it’s more linear than Resident Evil 2. This isn’t necessarily a problem if you’re in for a more story-focused survival horror, but with more areas in the game, you’re in locations for a far shorter time and more often than not you won’t get to explore as much as its predecessor. There are several areas such as the hospital where there are rooms with goodies, but these areas are short and you can’t necessarily return to them like you could in Resident Evil 2.

This was a problem the original Resident Evil 3 had as well. It was too ambitious, taking the player to a large variety of locations without having the density of puzzles that the mansion and the police station had. But, again, this is only bad for anyone that wants to explore the same location for a majority of the game. By giving the players more areas to go to, they’re able to flesh out the story, and if you thought that Resident Evil 2 took a lot of liberties to change up the story, Resident Evil 3 takes it to another level. It’s almost like the developers saw the original Resident Evil 3 as a suggestion, with a few checkmarks to tick off while fleshing out everything else as much as they could. I found myself fully invested in every event, every character, and I took time to read through every file I could. 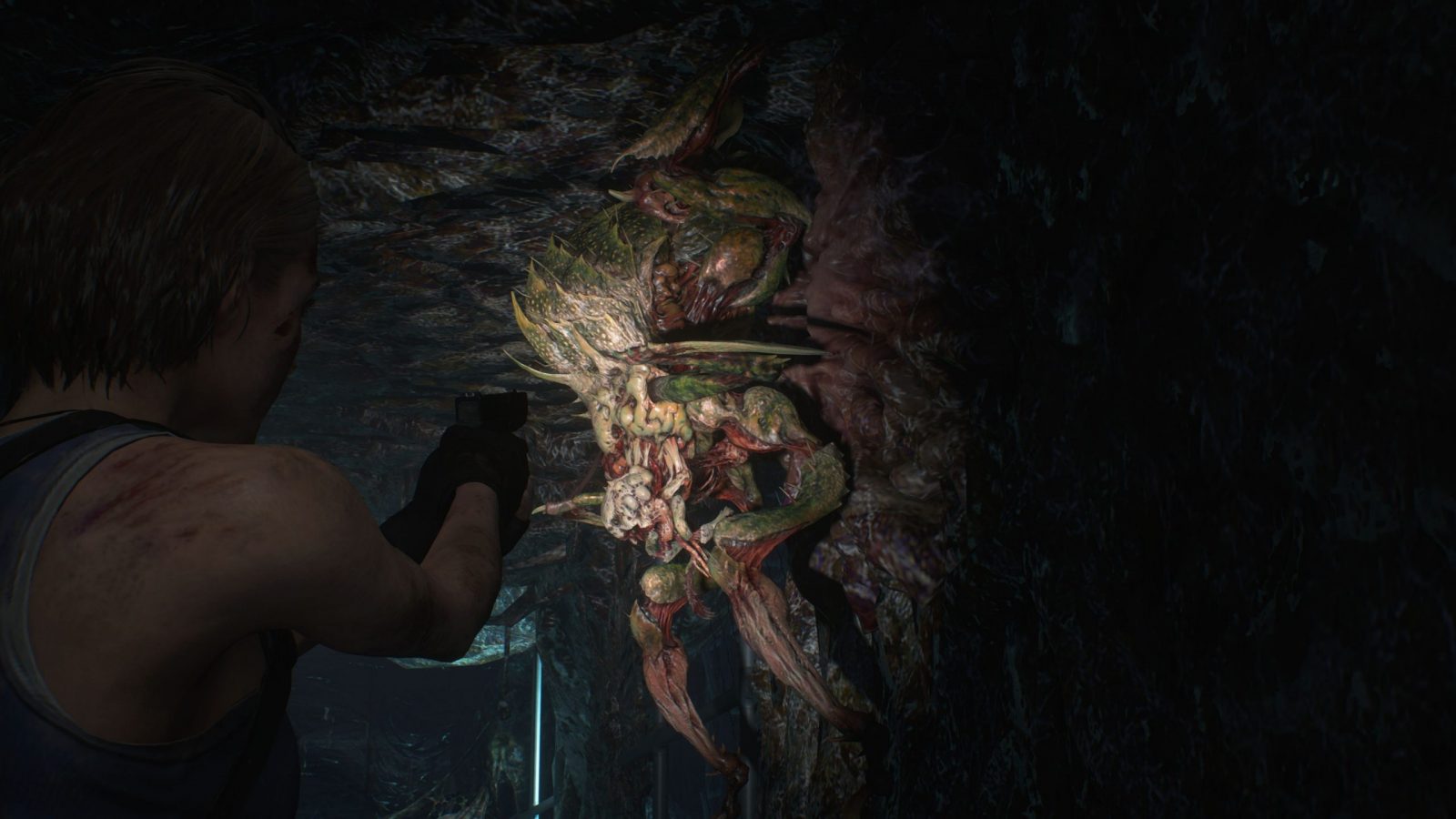 Reading the files will tell you everything about all these creepy crawlers.

However, since a good deal of things have changed, that means that there were moments of the original Resident Evil 3 that were sadly removed. For example, there is no longer a fight against the giant worm underneath the park, nor are there giant spiders again. The game does include some other monsters that I won’t talk about yet, but they don’t stick around for very long.

You can tell that Resident Evil 3 and Resident Evil 2 were in development side by side. The menus are the same, there are plenty of assets reused, and save for the dodging mechanic, they feel almost the same. For this reason it feels completely fair to compare the two. While Resident Evil 3’s scope in number of locations is larger, the game overall felt shorter. Instead of having two characters with their own scenarios and a “2nd run” for both, there is just one scenario. You will get to play as two characters during this and it is in all fairness longer than a single scenario in Resident Evil 2, but the content is much lighter this time around. After beating the game, you’re not given another mode like 4th Survivor or the Tofu Survivor modes, you’re only given a shop to buy special items and upgrades for the main game. This is to encourage the player to replay through the game to get the best time, but I didn’t feel as much of a drive this time around. 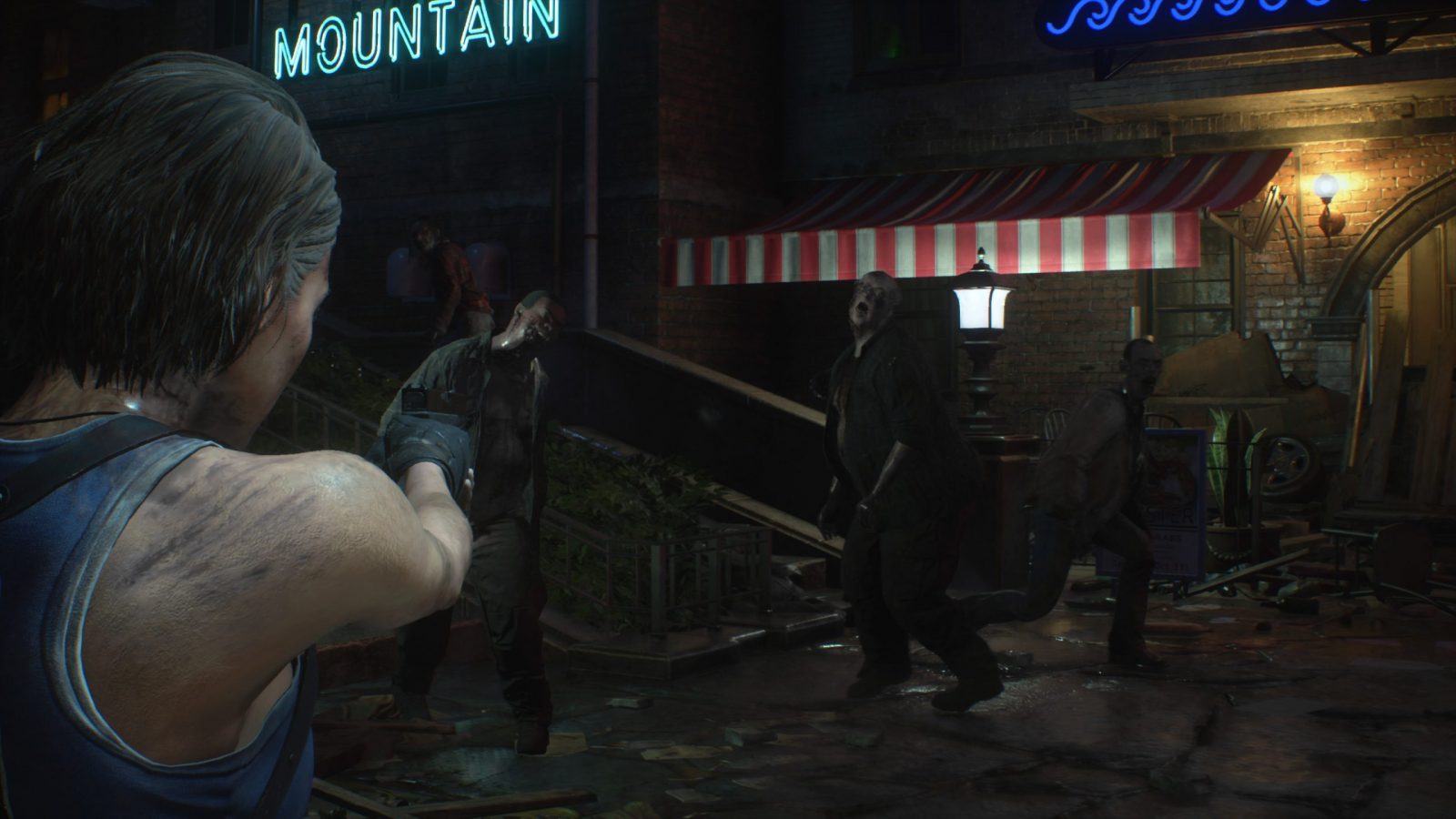 There’s only so many ways you can experiment the optimal path with a linear game.

I’ve definitely tried. Starting the game over a second time, I was almost exhausted with all of the cutscenes I had to skip and the hallway walking dialog situations that only proved to be a waste of my precious time. With the game being more linear than open, there wasn’t a good way to plan out the best route or what zombies to leave alive because I most likely wouldn’t be seeing these zombies a second time anyway. It becomes a game of how quickly you can go from point A to point B, which isn’t always a bad thing, but it won’t provide as deep of a meta as Resident Evil 2 had. Even though Nemesis is considered to have a beefed up version of Tyrant’s AI, the game is never open enough to take advantage of this.

This lack of extra modes is made up for with the inclusion of Resident Evil Resistance. This is Resident Evil’s next attempt at a multiplayer take on the series, and this is the first time since Outbreak that the multiplayer has truly captured the spirit of the franchise. While I didn’t get to play the game online with four other players, I am able to give a few impressions on the mechanics through the practice modes available. 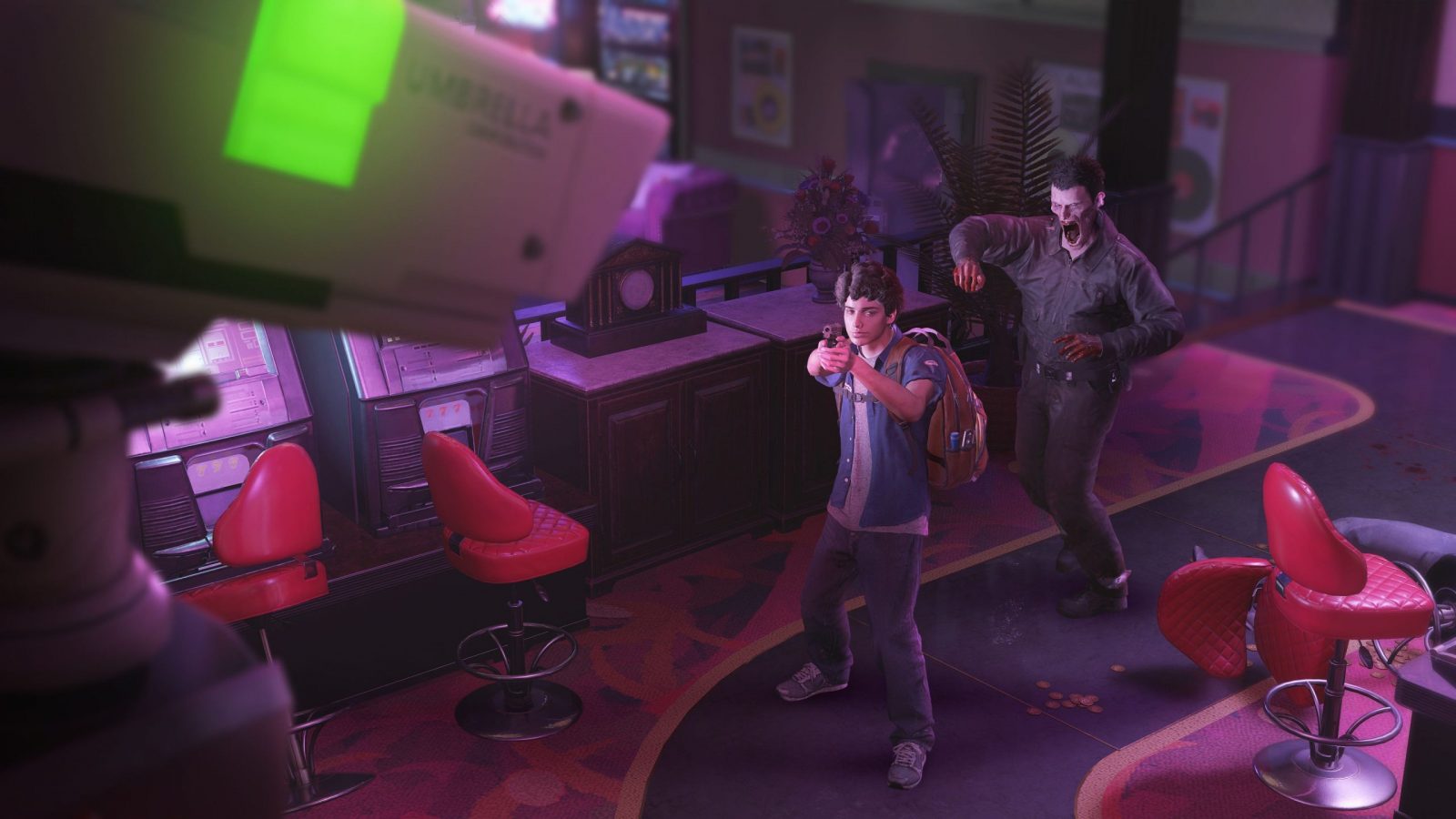 While the mastermind is never seen, they’re often heard, and their influence is everywhere.

Resident Evil Resistance is a 4 vs 1 game where four survivors have to make it through a labyrinth with a mastermind placing traps, zombies, and occasionally dropping a massive monster such as Will Burkin from Resident Evil 2. The mastermind gameplay is a little difficult to get a hang of. You have a limit of traps you can place and you have to strategize on which to place and what doors to lock. You can even turn your surveillance camera into a turret, which is good in a pinch. Everything has a cooldown, so there’s a good deal of strategy involved, though I wasn’t able to experiment with it as much as I’d like.

On the other side, you have the survivors, who are just trying to escape the facility. The gameplay is similar to Resident Evil 3, but each player has their own special abilities. Some are support such as healing and deactivating cameras, while others can use firearms more proficiently and take more hits. Each game seems to be split into three sections. Each time I played through the practice round, I had to find three pieces of a puzzle, defeat a security guard zombie and scan the keycard on three panels, and defeat three bio-cores. Survivors also use umbrella credits to buy new items and better equipment. 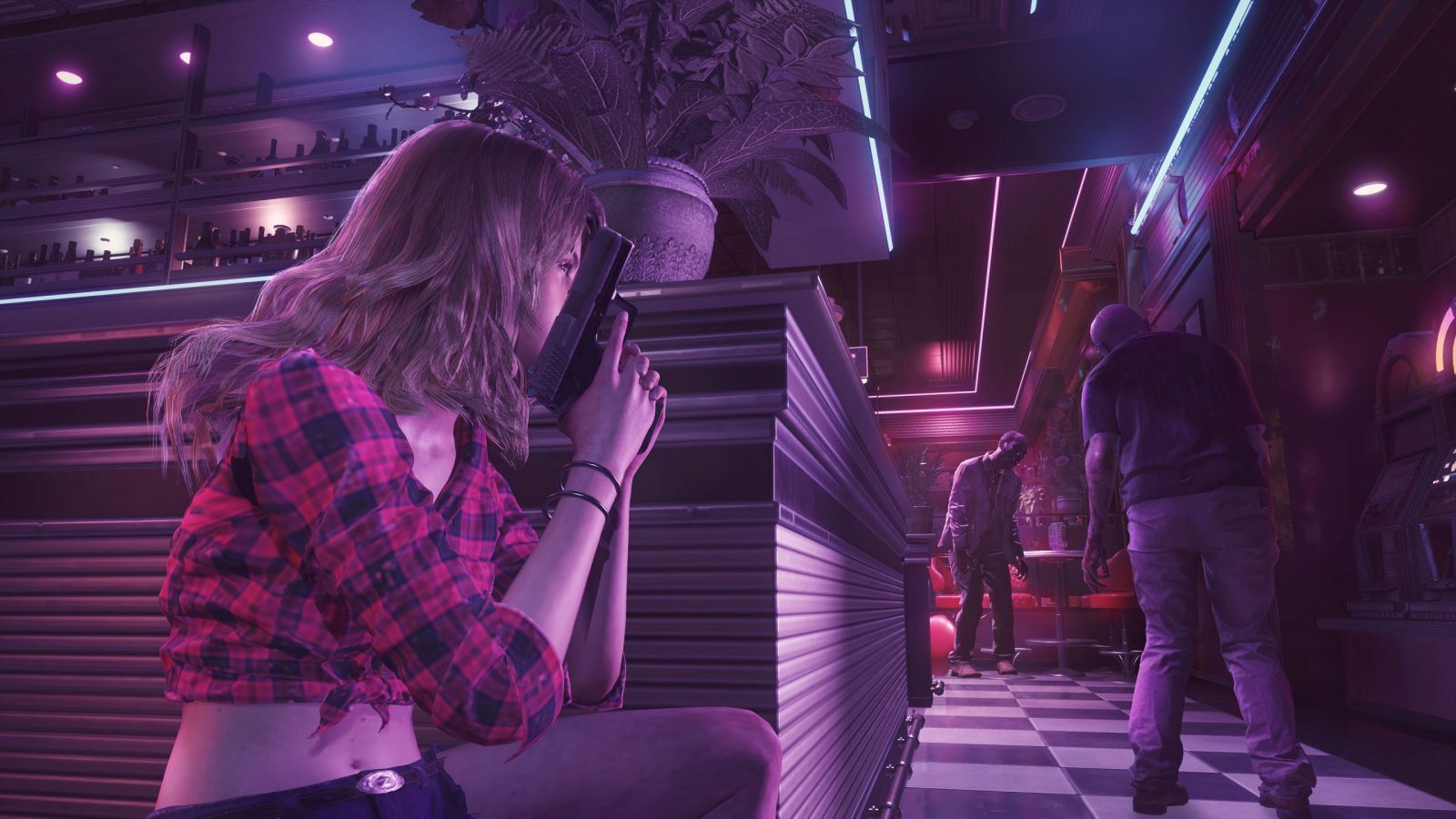 Crouching really made a difference with Becca. Almost every zombie was taken out with one headshot.

When I originally heard about Resident Evil Resistance, I was expecting something similar to Dead by Daylight, but that’s pretty far from the truth besides the 4v1 nature of the game. The survivors have a time limit to escape. They earn more time by killing enemies, but getting hit and even dying makes the time drop. Unlike other games like this, death is not permanent and you only lose when you run out of time. This is a nice change of pace. Also, the game actually feels like a cooperative Resident Evil with the survivors. It’s to the point where I wish we’d get a new version of Outbreak focusing on a cooperative experience and not the difficulty of facing a human player. 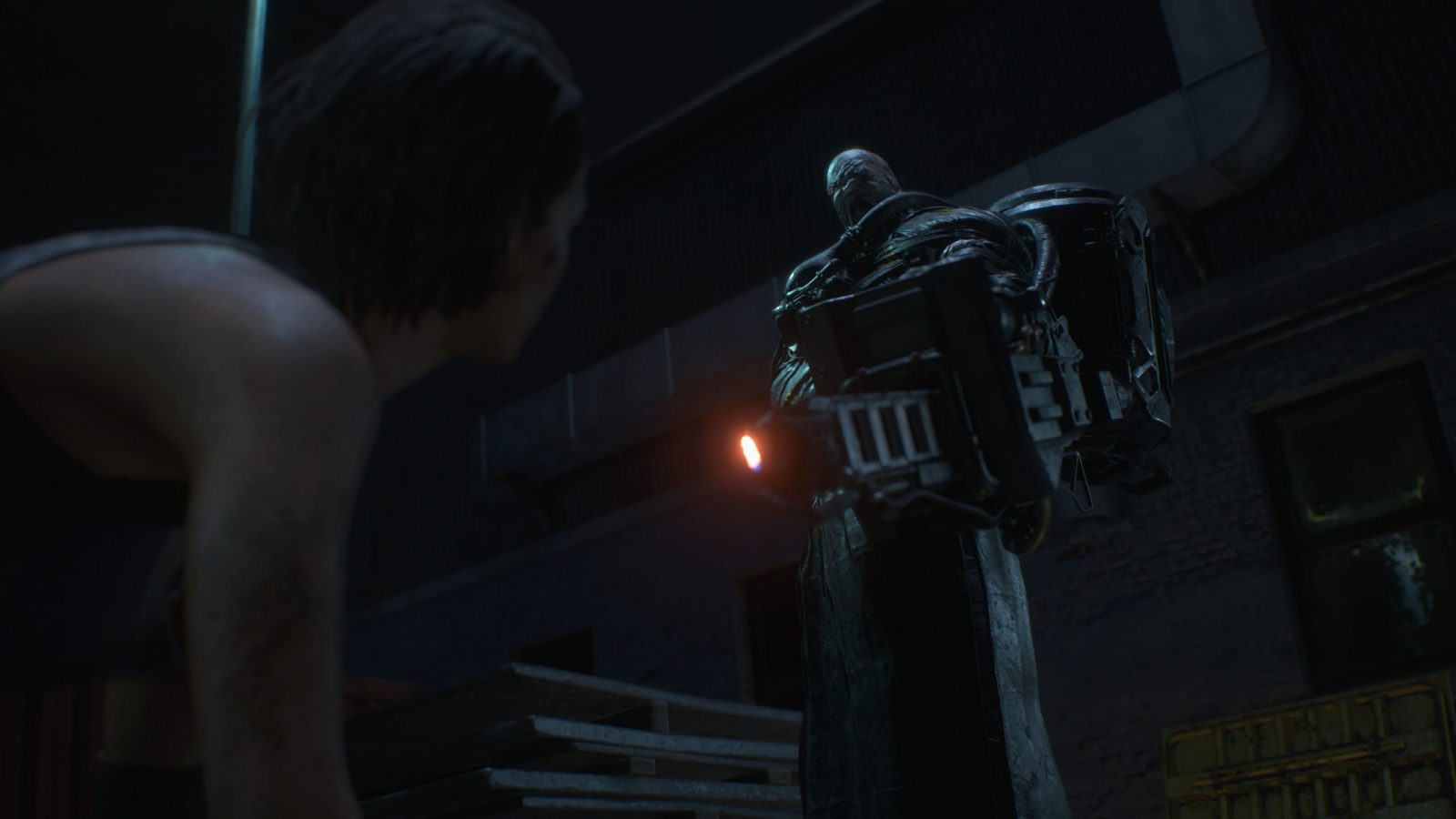 Resident Evil 3 follows in the footsteps of Resident Evil 2 by creating a great survival horror experience while revamping an old classic. While several sections from the original game are missing and it can be a tad linear, it’s a great ride with very few low points, with the game ending as great as it started. Though the main game lacks features, Resident Evil Resistance should make up for it if it can maintain a strong playerbase.

Sean Anthony likes to combine two of his passions: gaming and writing. Gaming has been a huge part of his life ever since he played his first game as a child, Kirby's Adventure. He aspires to have his name attached to an article that makes the whole world go, "Huh, that's neat, I guess."
Related Articles: Resident Evil 3
Share
Tweet
Share
Submit