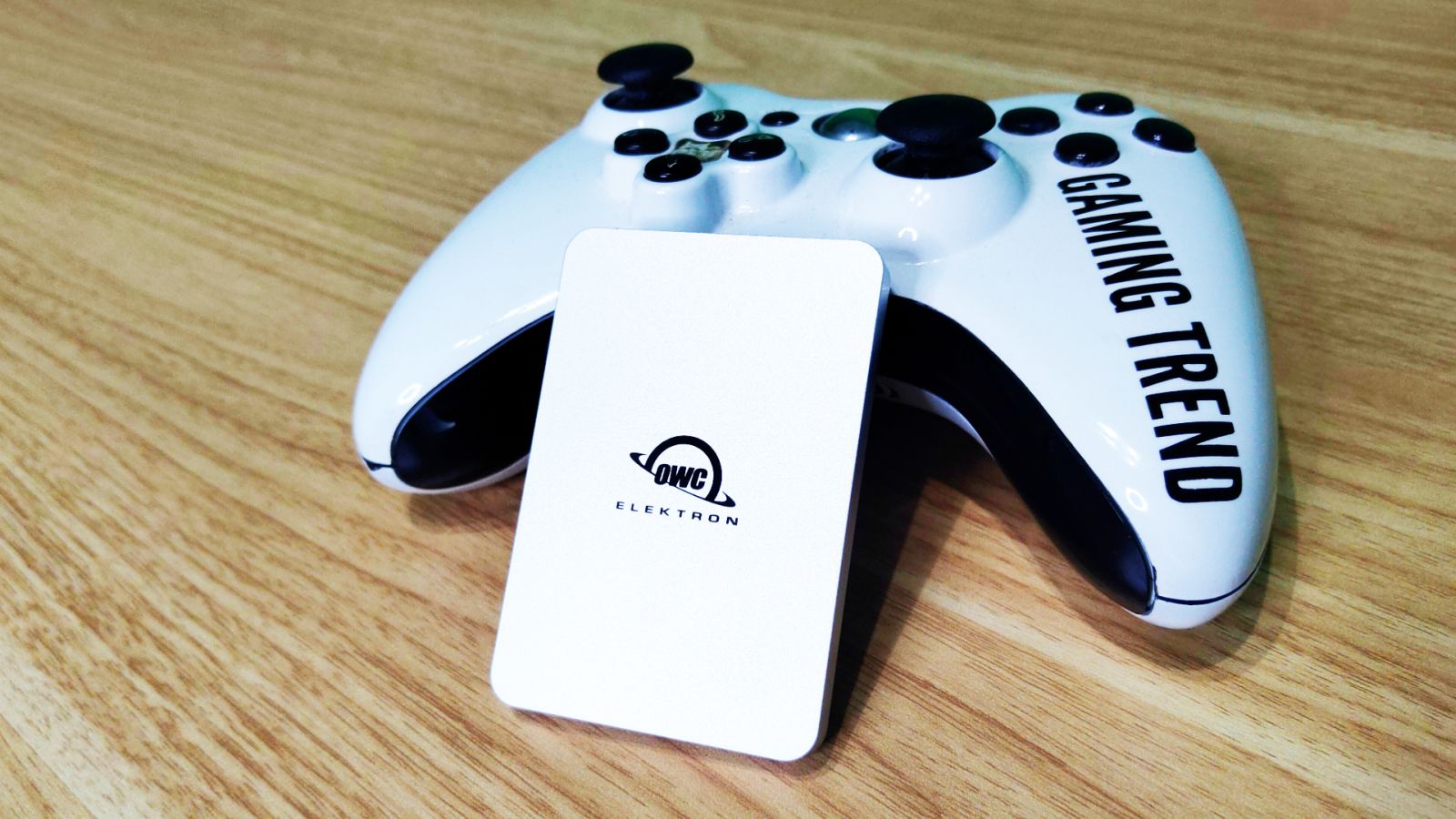 You fish around in your top drawer and find that old USB thumb drive you got from that conference back in 2015. If the dodgy thing has enough space to handle whatever you are moving, you might as well just strap in for a long copy time. Let’s face it — USB 2.0 is slow. How slow? Well, 480mbps doesn’t sound slow, till you convert it from megabits to megabytes — that’s just 60 MB per second. Even a moderately sized video is easily 1500 MB in size, with some games being in the 100s of gigabytes. It’s time to throw those old thumb drives away.

OWC is taking that next step with a fresh entry into high speed storage with their Envoy Pro Elektron. This Thunderbolt-powered SSD is aiming to replace every thumbdrive you’ve got with something sleek, rugged, fast, and highly portable. Let’s bench it up and see if it can deliver on those promises. 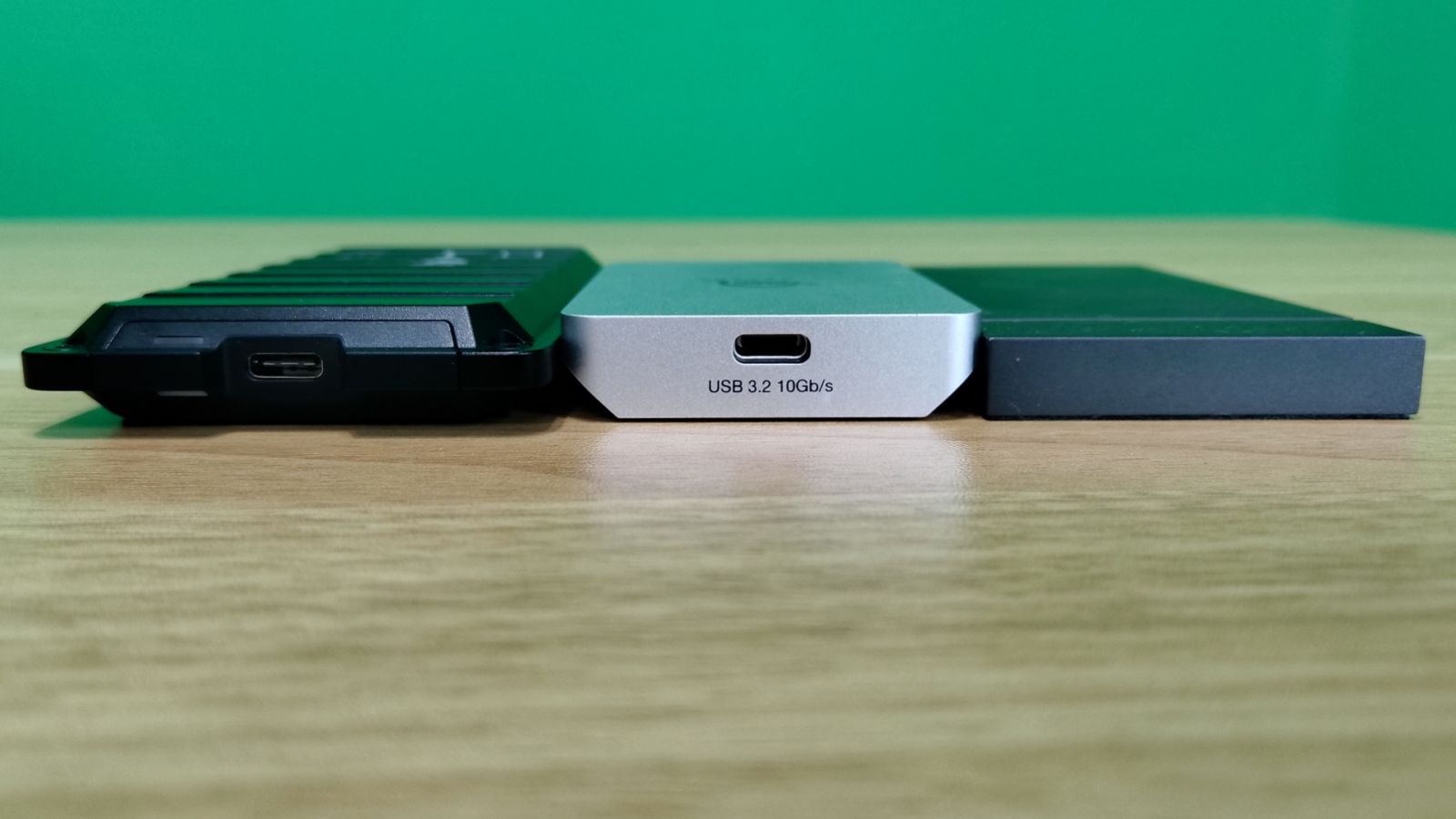 Before we dig into the specs on the Envoy Pro Elektron, let’s talk about Thunderbolt and USB 4. While they both use a USB-C connector, they are not the same. That said, they carry quite a few similar characteristics, including overall speed. How fast? Well, try 2,847 MB/s or 22,776 mbps for size. Being able to move files at a rate of 2.8 gigs of data per second means those copies that once took 20 minutes to read to a thumb drive, and then another 20 to write it back to its destination are a thing of the past. But those are theoretical numbers that the USB-C connector can deliver…right? What can the Envoy Pro Elektron deliver? Time for some tests.

For comparison, I decided it’d be a good idea to test some of my USB sticks laying around. 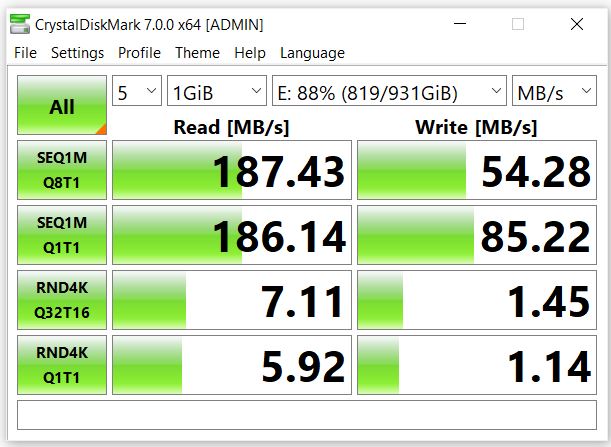 Not exactly setting the world on fire, right? The Envoy Pro Elektron advertises up to 1,011 MB/s (aka 8088 mbps) If it can hit anywhere NEAR that number it’d be amazing, right? Well, as Samuel L Jackson said in Jurassic Park — “Hold onto your butts!” 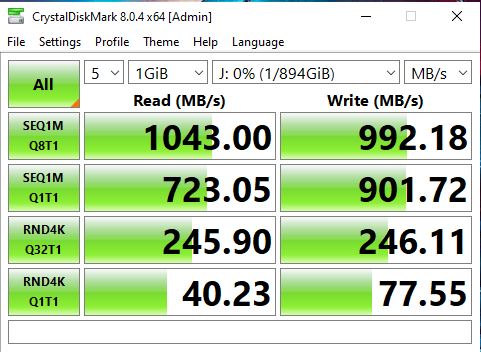 There is simply no comparing this with a traditional thumbdrive. While it posts speed just slightly ahead (roughly 100MB/s) of the Western Digital P50 portable SSD, it’s also half the size of that competitor. In fact, it’s actually roughly the same length as a USB stick, and about the same thickness, but 2.5 times as wide, as you can see below. The chassis is made of a solid block of aircraft grade aluminum, keeping it remarkably cool, and sealing it enough to be waterproof. Weighing just 0.19 lbs, or 85 grams (and measuring 0.5” height, 3” length, and 2” wide), the device is small enough to throw into your pocket, and that’s likely the reason for the shorter cable.

Let’s address the one place where it looks like the Envoy seemingly can’t compete with a run-of-the-mill USB stick — price. But looks can be deceiving, so hold that thought and read on. A 1TB USB stick will set you back 30 bucks at most, but that’s gonna give you the shoddy performance we saw above. A 1TB USB stick that operates at USB 3.2 will cost you between $160 and $350, depending on brand. That said, all of those brands have one thing in common — a max read and write speed of roughly 440MB/s. The 1TB model of the OWC Envoy Pro Elektron is $229 (The 240GB is $99, 480GB is $149, and 2TB is $399), and as we see above, delivers more than DOUBLE the speed of the very best USB stick that money can buy. Once again there is simply no comparison — stop buying USB sticks.

If you happen to be a Bitlocker user (and frankly, as ransomware gets more common it’s getting to be a wiser idea by the day), you’ll be happy to know that the Envoy Pro Elektron fully supports the Windows encryption. It also supports macOS encryption, though I don’t have a Mac to test that. That said, I did test Bitlocker and saw no appreciable difference in speed and performance — exactly what you’d hope for in a good piece of tech. 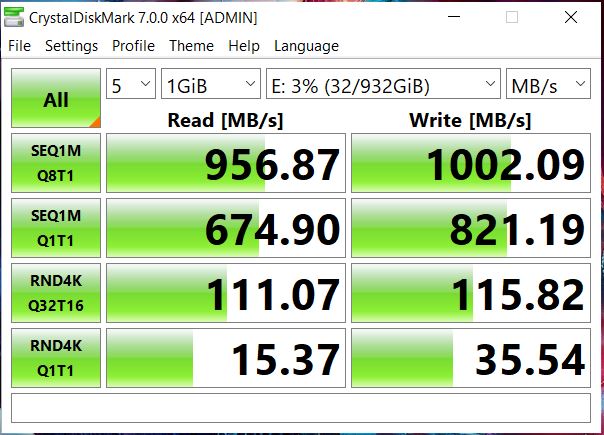 Comparison to the WD_Black SSD

Under the hood lies the heart of the Elektron — an Asmedia ASM-2362 controller pushing a 1.0TB OWC Aura P13 Pro NVMe M.2 2242 SSD. This chipset is widely used, and has proven itself in the marketplace as stable and reliable with companies like Sabrent, Seagate, and Samsung (what’s with all the S names?) using the chipset in their own solutions. I’ve had several of them in production myself for years at this point, handling tons of small transactions, large video renders, and other random read/write activities without an issue. Testing them with things like Crystal Diskmark and 3DMark for several days yields exactly what you’d hope for — consistency.

The Envoy Pro EX, this model’s predecessor, had a hard-wired cable. I’m glad to say that this new model features a detachable USB-C cable, which is included in the box. This means you are able to swap it out, should something untoward happen to it, or if you just want a longer cable. The included one is roughly 2.7 feet long, though the drive will support a certified cable up to 6.5 feet (2 meters) if you wanna get ridiculous. Tethered with a little rubber cord is a USB-C to USB-A adapter, so you’ll have it should you need it at some point.

The drive I’m testing is the 1TB model, though there are 240GB, 480GB, and 2TB models as well to match your needs. They are all the same form factor, giving you a whole lot of storage in a very tiny package. 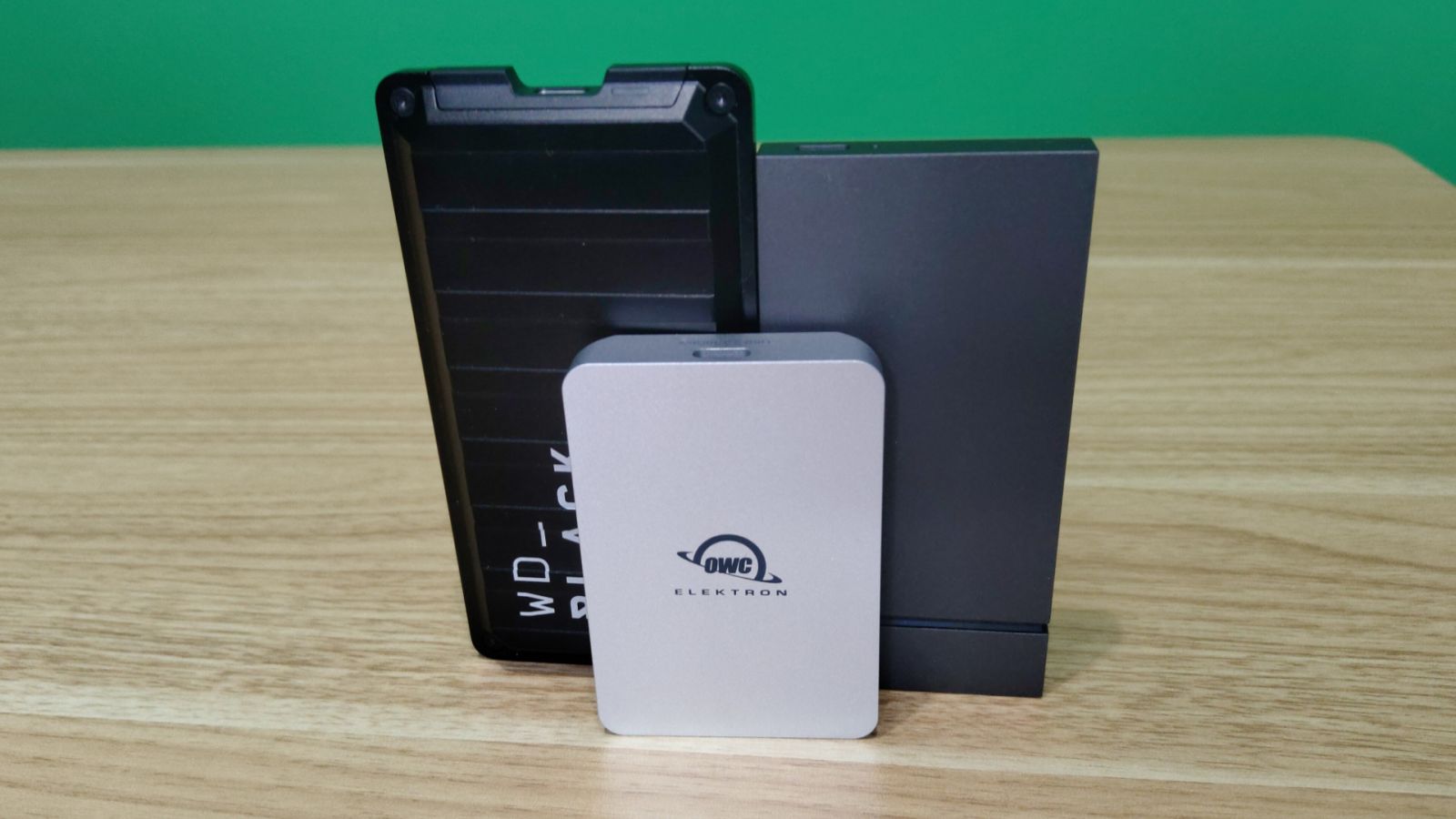 The Envoy Pro Elektron is clearly ruggedized, but how rugged was the question. Well, as the device is completely sealed it’s dustproof, and the aluminum chassis is fully armored against drops up to four feet in height. What surprised me is that it’s also waterproof for up to 30 minutes in a 1 meter submersion. I don’t plan on diving with the drive, but knowing that knocking over a glass of water isn’t going to kill it is just icing on the cake. Hell, I suppose it’s probably icing proof — this thing is built to keep your data safe.

If you’ve read my tech reviews, you know I’m a stickler for warranties — especially with hard drives. Companies like Netgear continue to ship products with substandard warranties of just 90 days, where other companies like OWC stand behind their product. How much? Well, the Envoy Pro Elektron comes with a 3 year warranty. While it doesn’t cover accidental damage (though I’m hard pressed to think of a way to damage this on accident), it does cover the drive from any failure under normal use. 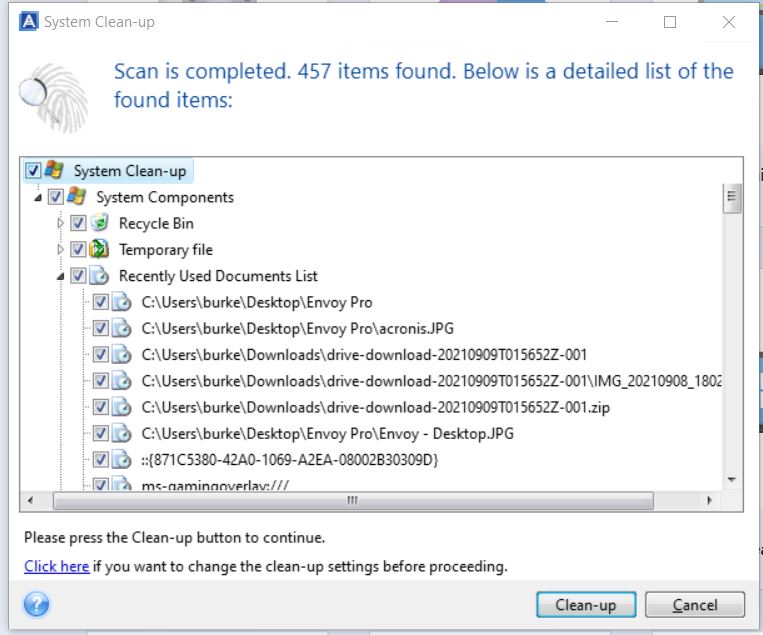 My only real complaint is the 3rd party backup software that comes bundled with the drive from Acronis. Acronis Live 2021 opens a whopping 12 services, eating up 132MB of memory at any given time, whether it’s doing something or not. Trying to close it in the tray proved to be impossible as there isn’t an option to shut it down. Task manager proved to be the only solution, and man did it fight me every step of the way.

That’s a lot of processes for something not running a backup.

There are some positives to all this Acronis bloat. It will generate rescue media to recover your Windows install, and it’ll boot to Parallels on the Mac side of things. It’ll perform a “system clean-up” though that’s a bit on the suicidal side as you can see below — it wanted to delete an image I just made for this very review. It will also run vulnerability scans, though the only thing it found was a false-positive on install of an image editor that I’ve been using for going on a decade. You can unlock the software with the serial number of the drive, but if it can’t manage the basics I’d recommend something like BackupPro 15 instead.

The Envoy Pro Elektron advertised 1011MB/s performance and actually exceeded that. Contained in a universally compatible, lightweight, ruggedized, waterproof, dustproof, and drop proof package, it delivers power and portability in an impossibly small package. Do yourself a favor -- ditch that USB stick. Your time is worth more than that.

Ron Burke is the Editor in Chief for Gaming Trend. Currently living in Fort Worth, Texas, Ron is an old-school gamer who enjoys CRPGs, action/adventure, platformers, music games, and has recently gotten into tabletop gaming. Ron is also a fourth degree black belt, with a Master's rank in Matsumura Seito Shōrin-ryū, Moo Duk Kwan Tang Soo Do, Universal Tang Soo Do Alliance, and International Tang Soo Do Federation. He also holds ranks in several other styles in his search to be a well-rounded fighter. Ron has been married to Gaming Trend Editor, Laura Burke, for 21 years. They have three dogs - Pazuzu (Irish Terrier), Atë, and Calliope (both Australian Kelpie/Pit Bull mixes).
Related Articles: Envoy Pro Elektron Thunderbolt SSD, Hardware
Share
Tweet
Share
Submit