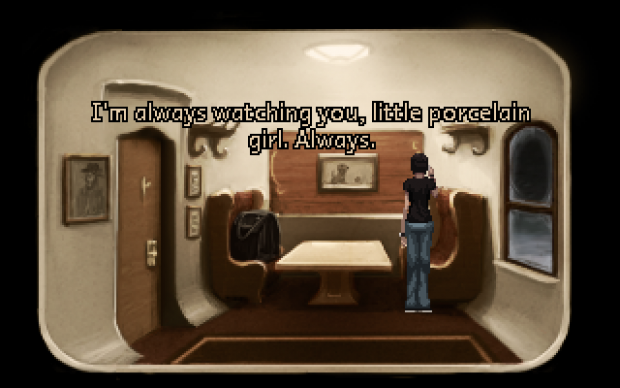 I’ve found that recently, I’ve been a little let down by the offerings of the “scary game” genre. Though face-cams and let’s plays of the recent bout of virtual haunted houses provides a lot in the way of entertainment, there’s little lasting effect. Horror isn’t a jump scare or looped GIF.

It’s something that seeps into you, crafted to encompass you so gradually that by the time you realize it, it’s too late. Predestined fates, cruel retorts to those unworthy of making it through the night, and the terrifying realization of your insignificant agency in the matter – that’s horror, the kind that makes you shiver at night, not afraid that you’re going to meet a terrible fate, but that you already have and are woefully unaware of it.

While Inhale is a prequel, the main story is largely set on the train to Augur Peak.

In the vein of long-lost titles like I Have No Mouth and I Must Scream, The Charnel House Trilogy is a point-and-click adventure that elicits those exact feelings of creeping despair. A series of three short stories, dubbed Inhale, Sepulchre and Exhale, tell the story of two wayward travelers on separate but intersecting pilgrimages to the mysterious island Augur Peak. Dr. Harold Lang and Alex Davenport board a train to the island, but soon learn that the vehicle is more than it seems.

While you have the option to play them in any order you choose, that really only seems to exist for those who have already played the second story, Sepulchre, which was released for free in 2013. While that story follows Dr. Lang and his personal struggles, Inhale and Exhale tells Alex’s side of the narrative, giving some backstory and expanding on the nature of the train, its crew, and where the train is truly headed.

That sense of “something’s not right” is always looming in Charnel.

For those who find joy in dissecting works for their themes and motifs, this is an experience that caters heavily to you. The imagery of earth and worms, bags and trains, transportation as a passing-through of stages in life, even the title evoking the imagery of a charnel house weave a wonderfully spooky ambiance to the trilogy. There’s a lot to ponder on throughout the game, though most mysteries receive answers in some manner by the conclusion.

To delve further would be to spoil some great moments, but it is quite amazing how much depth the cast is given in the short amount of time you see them. Charnel House won’t take you much longer than a few hours to see the credits roll, and for some strange people out there, that might be a dealbreaker.

Some references are funny but a little immersion breaking.

But what Charnel House does in that time is a meld of point-and-click revival and novel-esque storytelling that is very much worth an afternoon. It is mostly driven by clicking around and interacting with objects, and the few puzzles that exist are very simple and easy to solve. You won’t be aching over a locked room for hours, and that’s nice in some ways; most adventure games tend to include obscure puzzle-solving elements in some grand celebration of obfuscation, and Charnel House has some cheeky nods to the fourth wall acknowledging those conventions.

I do wish, however, that puzzles involved a little more thought and little less walking between train cars. Combining items and creating solutions to problems only happens a handful of times, and especially in Alex’s segments, it would’ve been a nice way to show her taking control of her situation compared to Lang’s segments.

Aesthetically, Charnel House is quite similar to 90’s-era adventure titles. The character portraits are great, and the detail on objects is excellent, despite the lower fidelity of pixels as opposed to polygons. The soundtrack and ambient noises are also fantastic, nailing the atmosphere and driving that chill up the back of your neck as you progress further through the mystery of the train. Every character is fully voiced as well, from the smooth and smoky graveyard-shift radio DJ to the main protagonists.

While it does so much in such little time, I found myself only wanting more in the end, and that is both a compliment to the Charnel House and a critique. The game ends with a cliffhanger, and the ominous concluding words implicate a follow-up in 2016. It felt very serialized – and really, as good as Charnel House is, by the conclusion it will feel like only a prologue, a proof of concept. There’s a lot of great ideas at play and framework to build on, but the experience is short and sweet.

The Charnel House Trilogy is a great rainy afternoon pulp horror game, with just enough creepy imagery and top-notch atmosphere to mull over in the days after. It ends up feeling like a short, albeit exciting, prologue to a great adventure game.