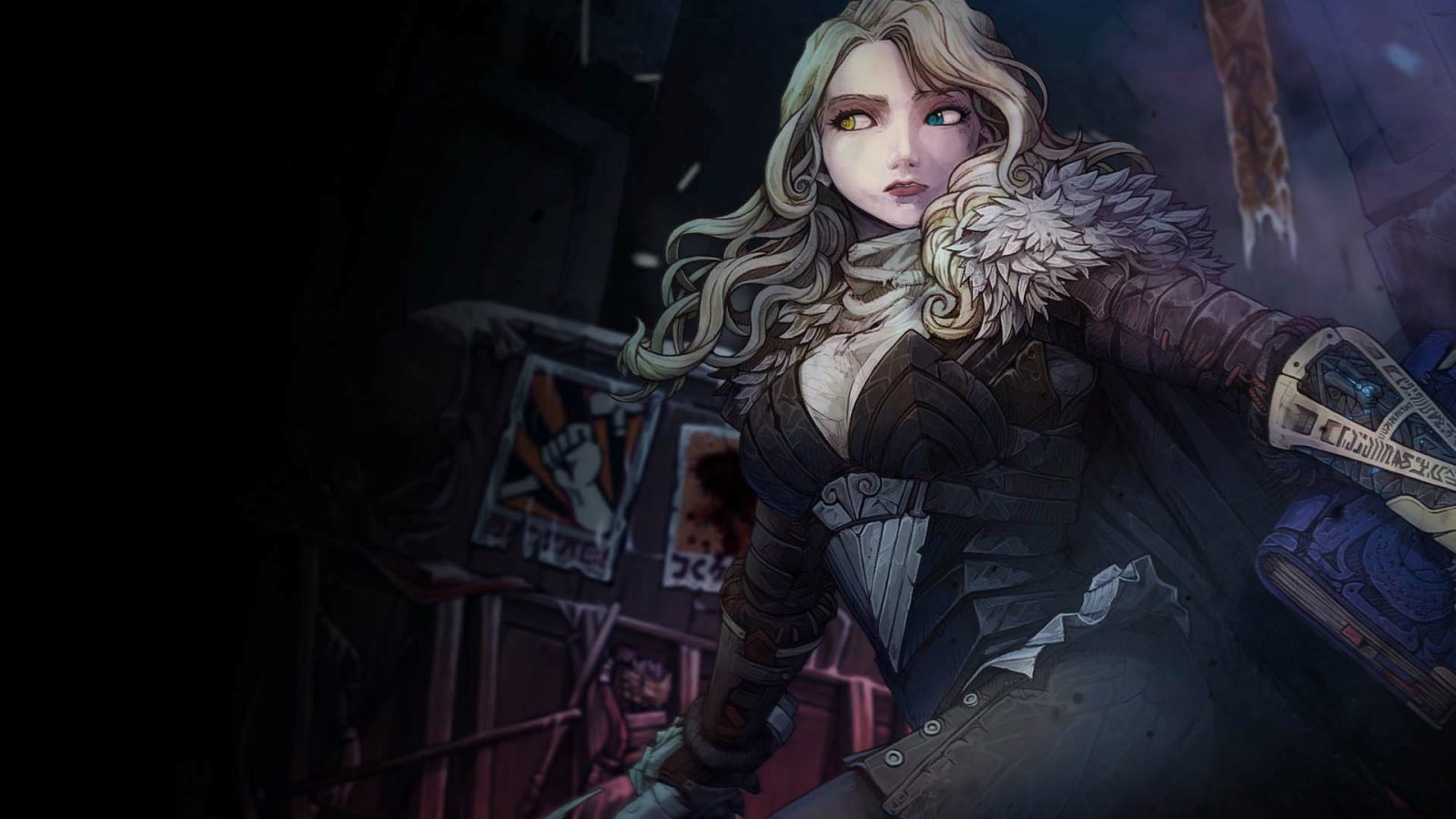 Devespresso Games’ latest game is an ambitious roguelike fantasy-epic with a lot of heart stuffed into a relatively small package. Citing The Elder Scrolls and Final Fantasy as inspirations and benchmarks, Vambrace: Cold Soul sets its focus on strong storytelling and expansive worldbuilding, with challenging but rewarding turn-based, dungeon-crawling gameplay akin to Darkest Dungeon.

Take a trip down the ravaged streets of Icenaire with Evelia and her Aetherbrace on a perilous journey to put an end to the King of Shades’ reign. The expansive, lore-filled world of Vambrace: Cold Soul serves as both the arena and dinner table for a host of characters as mystifying as the places they inhabit. Meet a diverse cast belonging to all manner of cultures and races, fighting with or against them in battles of wit and steel. It’s difficult to fathom how players can be made to feel involved in this grandiose game of chess through nothing more than simple walk-and-talk gameplay intermixed with light dungeon-crawling—this being the game’s greatest obstacle and one it never completely conquers. And it’s not as if Vambrace: Cold Soul bites off more than it can chew, but as the hours go by, it becomes obvious that the gameplay and story never complement each other. 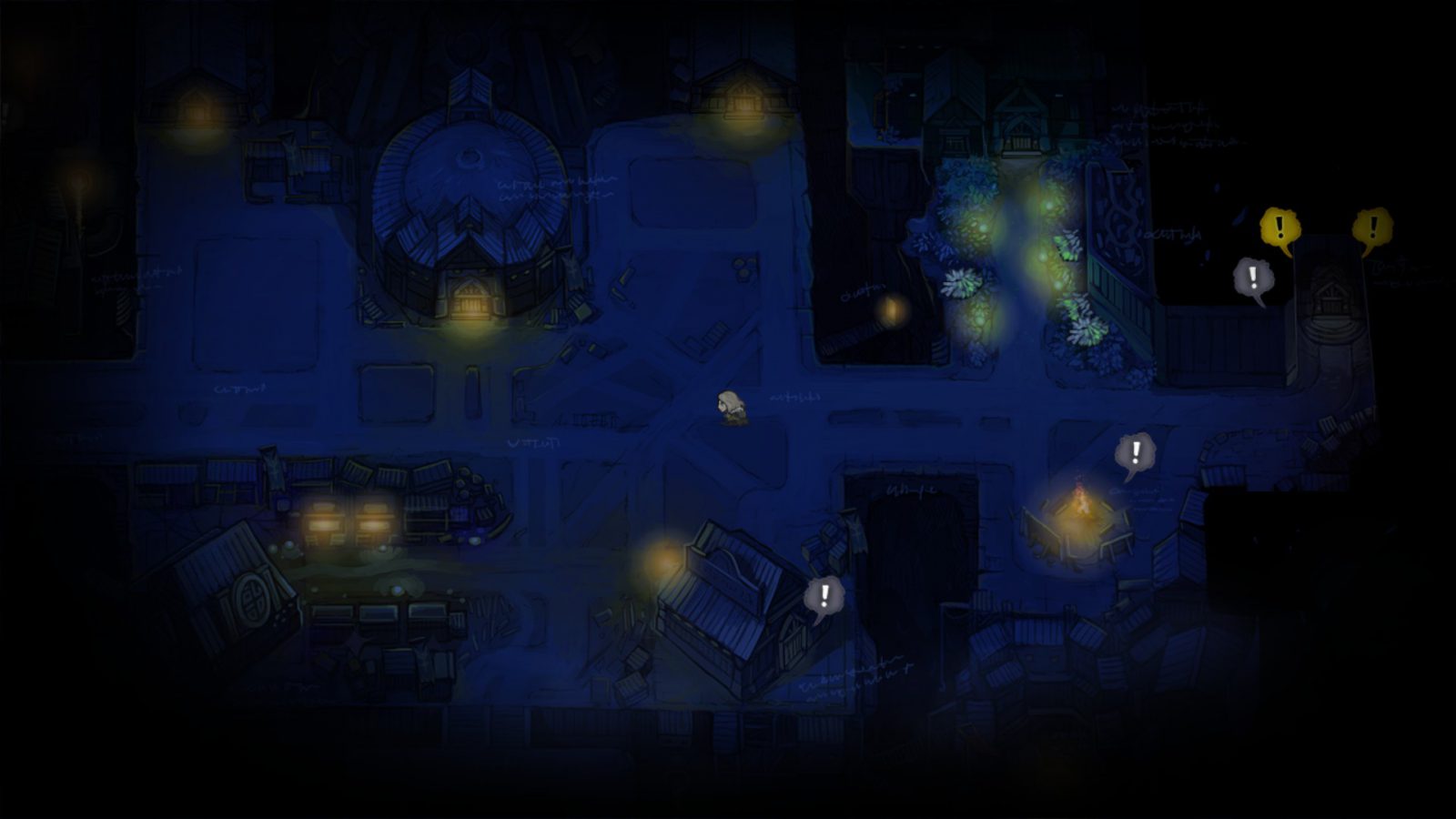 A world of possibilities

As the situation with Evelia and company continues to evolve, the gameplay plateaus and players will find themselves in the same environments, fighting and avoiding the same obstacles in long battles of attrition, using the same strategies that haven’t changed beyond the tenth hour. Yet, the first few hours of staving off death and sickness are fairly enjoyable. Arriving at the first dungeon-crawling locale, Evelia and her party of 3 recruited mercenaries—each with unique names, races, and classes—must go through room after room to clear the area, dealing with a handful of potential encounters. These encounters include combat against enemies and wraiths, a shop, the highly sought after loot room, the campfire, and a random event. Certain stats, like overwatch or awareness, improve your party’s chances of survival, helping you to dodge traps, unlock chests, and recover more at campfires. Buffs and debuffs received from encounters are vague, but it’s through experience and trial-and-error that the player will learn how to respond to every situation. Each party member has two meters, one for health and the other for vigor. Both can be lost during combat and on a few other occasions, but vigor will drop by one for every room visited. This on top of a geistometer, which, when filled up upon entering too many rooms, will turn all rooms into combat encounters. The game’s systems greatly discourage exploration, especially in certain areas where the geistometer fills up especially fast. It’s up to the player to seek out the path of least resistance, and once they’ve reached the exit room to clear an area, they’re treated to several more areas before they’re able to confront the boss.

Deaths are permanent, meaning all deceased party members will be lost forever alongside their equipped gear—brutal when factoring in the considerable amount of grind required to craft and upgrade said gear again. However, if Evelia falls in combat, the remaining party members will be safe and players will respawn with their gear intact. Healing items are pricey to purchase and craft as well, meaning a fair bit of grinding will always precede any serious attempt to reach and kill a boss. Between runs, Evelia can undertake side quests in exchange for additional story bits and alternate outfits. Much of this content, and much of the story content as well, involves roaming the hub area scouring for the correct NPCs to talk to, before chasing down another to do the same thing. It’s unfortunate, but these dull, walk-and-talk segments are where the narrative payoff lies. At times, dragging the player out on expeditions into Icenaire feels like a distraction as things continue to bubble in the hub area without Evelia.

And as the story ramps up, the desire to stay where the action is skyrockets. Instead, most of the game is spent on expeditions walking by the same assets over and over, struggling with disorienting map design (often moving back-and-forth between the wrong rooms), and sighing loudly when a combat encounter is unavoidable. Not only are the skills and their animations drab, there is little sense of growth and the occasional tinge of “unfairness.” In truth, combat is very fair. The numbers are well-balanced, and it never feels like the party members are severely lacking in any way. But healing for 1 damage, hitting for 3 with no room for additional attacks and improvements as enemies’ health pools inflate is a terrible feeling. On top of that, the chance for attacks to deal no damage is absolutely crushing given how frequently they occur, especially in a game where every turn is a make-or-break moment. The scarcity and cost of healing items in conjunction with the negligible rewards from combat make Vambrace: Cold Soul’s most fleshed out portion its most undesirable. It’s very much a chore after quickly hitting the ceiling for tactics and abilities early on with the new challenges being gimmicks as opposed to its inspiration, Darkest Dungeon, which has no shortage of style, variety, or tactics. With other encounters, all it takes is a party member with the right stats to render every non-combat encounter trivial, letting players walk straight through without concern. The systems have allowed nothing happening to be more beneficial than having something happen. 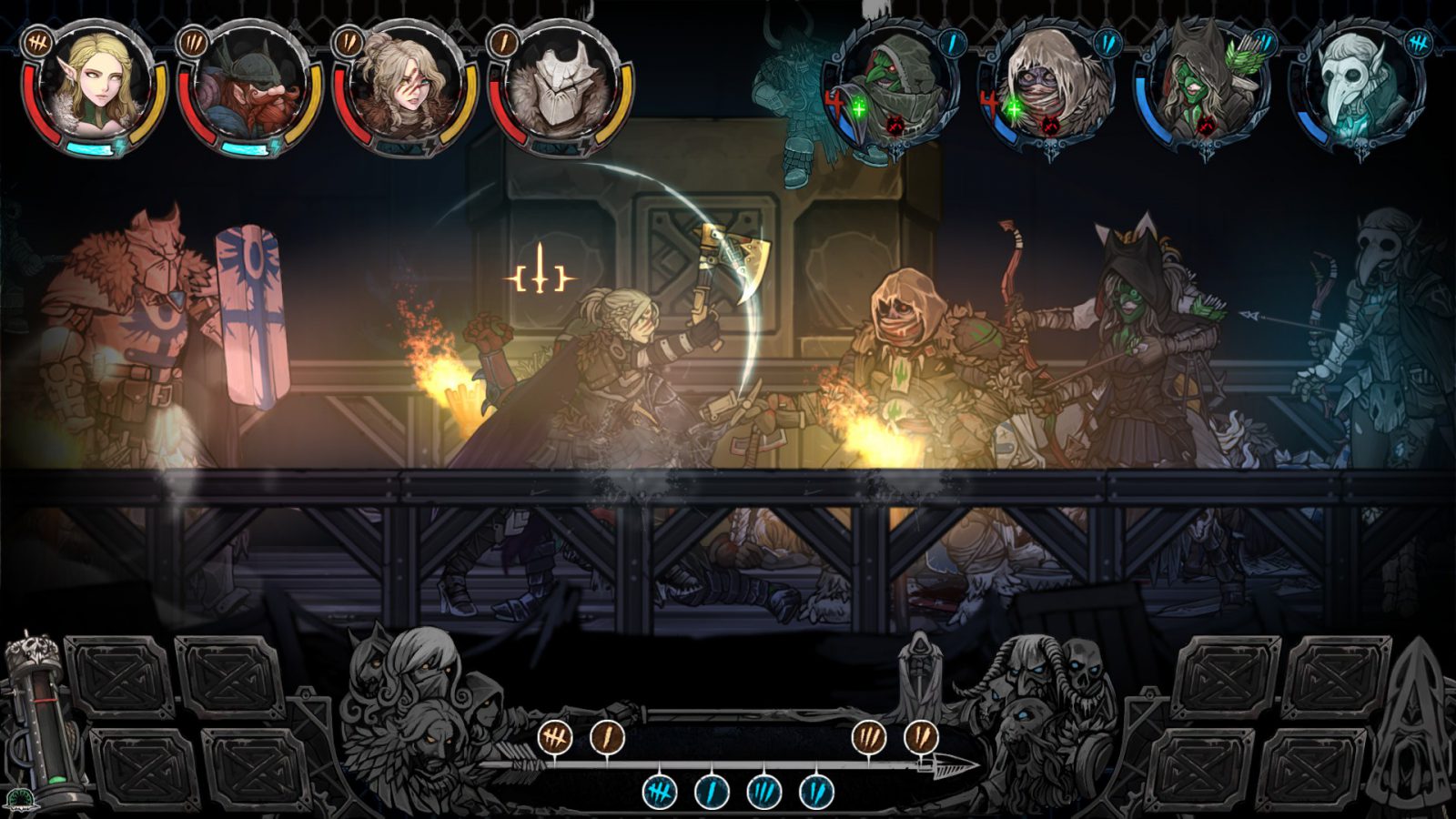 Ultimately, it’s the missing sense of purpose that did me in. Venturing out into the unknown and frequenting lifeless locales when all major story beats occur between expeditions makes embarking on them feel so unrewarding. The story has its fair share of fantasy cliches and predictable plot points, but only during dialogue does the game have a pulse. When outside of these select scenes, the gameplay hampers the narrative at every turn. You have no sense of how powerful Evelia’s Aetherbrace, the item at the center of the game, is since it has no bearing on gameplay. You don’t feel any strong attachment to the majority of important characters because they’re nothing but accessories to decorate the hub area.

Vambrace: Cold Soul hinders its own narrative by keeping story separate from gameplay. Had the expeditions and combat been less shallow, perhaps there would have been room for players to create their own stories. As it is, the game is a mediocre romp through a lore-heavy world which fails to communicate any of said lore through any means other than text.

A self-deprecating, overly sarcastic pair of glasses that occasionally possesses a human host in order to partake in the delightful process of playing video games, then immediately complaining about them. When he is not playing games (a rare occurrence), he can be found either writing about things that no one cares about, or haunting the quiet streets of his Canadian suburb.
Related Articles: Indies, Vambrace: Cold Soul
Share
Tweet
Share
Submit