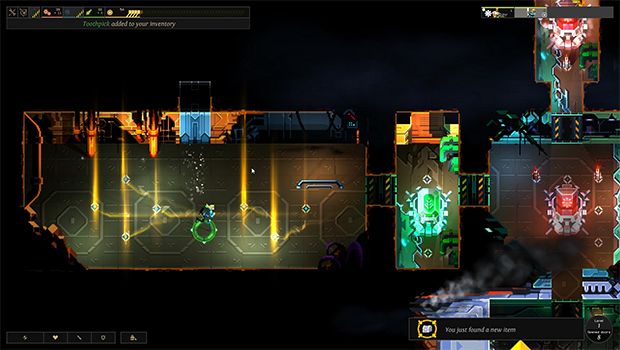 I thought everything was perfect. I had strategically placed turrets and healing modules along my path to freedom. I had the rooms along my escape route lit up. I was sitting happily in the tenth out of twelve dungeons and was ready to set my adventurers free on the surface. I picked up the power core with my runner, Sara Numas, who was the fastest available character I had. Then it all went wrong. I knew I had set up my defensive and offensive modules right, but it couldn’t hold back the monsters that started flooding out from the unopened rooms. My runner took a massive amount of damage running through the deadly dungeon and ran into the room that my tank, Gork “Butcher” Koroser, was waiting in. The turrets started going off like fireworks as Gork stood there blasting away the monsters with his machine gun, but the horrors in the dungeon were too much, and the brute died in a beautiful final stand, attempting to save the core and allow Sara a chance at freedom. As she approached the entrance to her final room, a creature popped out and took the final bit of health she had, killing my chance of hitting the eleventh dungeon. I sat back, highly disappointed, and saw my stats. There was no going back. Death is permanent, and my only chance to reach the surface was to start over.

This is Dungeon of the Endless; a roguelike, tower defense, turn-based game. Although that might be a mouthful it manages to melt the different genres well, and creates a fluid game that is extremely hard and strategic, while remaining fun. The premise is simple: your ship crashed into a planet and you must clear 12 dungeons (which are levels up to the surface) and bring your ship core along to power up the elevator at the end of the dungeon. Everytime you open a procedurally-generated room in the dungeon it acts as a turn (hence the turn-based part) in which monsters can come flooding out and attack your characters and core. If your characters die or core gets destroyed, it is game over. When the game was released earlier, on Steam Early Access, I had a mild interest, but the game seemed too simple, which stopped me from buying it. After Dungeon of the Endless’ full release, I can confidently say it is worth the $13 price tag and that it is far from simple.

Dungeon of the Endless is hard, to the point it may turn off many gamers. Deaths are permanent and when I started it on very easy mode I got my butt handed to me time and time again. I quit playing after 40 minutes on my first playthrough simply due to frustration. I then went online and read guides and hints and quickly realized that most of my deaths were from simply not understanding the game fully. I charged back into the game with my newfound knowledge and reached higher and higher levels before what seemed to be an inevitable death and game over. But the more I played, the more I learned, and soon I was reaching the surface on very easy mode. From there I continued to play harder difficulties and seemed to learn a new tactic or mechanic during each playthrough. This game is not meant to hold your hand or allow you to win easily, it must be earned. Much like Dark Souls (difficulty wise) the more I learned and played, the more enjoyment came out of finally reaching the surface and winning. One complaint about this, however, is the pure lack of any real tutorials, sure there is a tutorial mission that shows the very basics of the game but that’s it. It fails to tell you 90% of the tactics and strategies needed to win; those must be earned through death and experimenting through gameplay.

Along the way you must gather resources either through unlocking new rooms, or making modules that will increase how much of each resource you get through your adventure. The strategies involved in resource management become one of the most complex parts of the game. Gathering dust allows you to power rooms, which allows you to see the room when no hero is currently in it, as well as stops any monsters from spawning in the room. This always made it hard figuring out which rooms to power to make the best route for getting my core to the elevator, without having too many enemies spawning in conjoining rooms of my path. Food allows you to level up characters, recruit new heros, and heal. I constantly had to decide to level up my starting players, save to recruit new ones, or hold back in case things got out of control and I needed to heal a lot. Building modules requires Industry and deciding what to build was sometimes a huge headache. Main modules allowed resources to come in greater numbers, but turrets and healing modules are needed to help defend your characters and main modules from the monsters lurking in the shadows. The Science resource allows new modules to be created and upgrading the ones you have. Choosing what to upgrade can change the outcome of a game, for better or worse. Managing all these resources becomes very challenging, but making them all work together is also extremely rewarding.

One of the strongest parts of Dungeon of the Endless is the RPG Lite mechanics and characters. Starting off with only four playable characters seemed a little light on the possibilities but each character has a strong set of stats and their own weaknesses and strengths. When you choose your starting two characters it is vital to pick a combination that will work with your strategy. I quickly found Sara Numas and Gork to be the best for me early in the game. Sara is weak but fast, while Gork is very slow but a tank. This allowed me to set up turrets and main modules around where Sara was giving her some defense, and since she had a decent amount of wit stats, it upped the amount of resources I was given from the modules. Gork, on the other hand, was perfect for opening new rooms and clearing out mobs with little or no turrets needed. When I found the elevator Sara made the perfect runner with her speed, and allowed Gork to set up in a room and blast enemies while they made their getaway. Along the way you can meet and recruit new members, and if they survive three levels, they become unlocked for future games. This was an amazing idea simply because it allowed three levels to learn the strengths and weaknesses of new characters before just jumping in blindly on a new playthrough. With resources you can also level up your characters and find unique pieces of armor and weapons to give them, that will benefit or hinder your heros.

The graphics and sound in Dungeon of the Endless are very well done, although it won’t appeal to everyone, especially younger gamers. The graphics are very simple, but effective. Most of the game is in 2D with the only real 3D object being the core that rotates. The look and feel of the game reminded me in many ways of the Baldur’s Gate series; it has a dark and dreary look to it. After playing for a bit, I found the graphics worked well as simple as they may be. I could see the lite up rooms, and the UI clearly showed my resources, all while having a nice nostalgic feeling to it. At the same time, most rooms felt the same and there just isn’t a whole lot of variation from game to game. The same goes for the sound design; it is dark and gloomy yet very simple. The music and sound effects set up a nice atmosphere, but there is no spoken dialogue and overall it just didn’t have much to it. The game looks alright and the sound is okay, but luckily this game is pure strategy, and it doesn’t need those things to succeed.

Dungeon of the Endless

Dungeon of the Endless is a challenging and rewarding game that allows you to learn and grow with it. The more time you put in, the more enjoyment you will find.

Growing up in a small Colorado town, Bryan has always had plenty of time to play games. PC is his first choice of tech followed by the PS4. Graduating at 16 Bryan knew he wanted to be a writer and wanted to combine his love of games into that and found Gaming Trend in 2012 where he quickly became a member and started writing for them as soon as he could. He is still at Gaming Trend, but now has 2 kids, a puppy, and a lot less time to play the games he loves, but he always finds a way to get back into gaming.
Related Articles: Dungeon of the Endless
Share
Tweet
Share
Submit