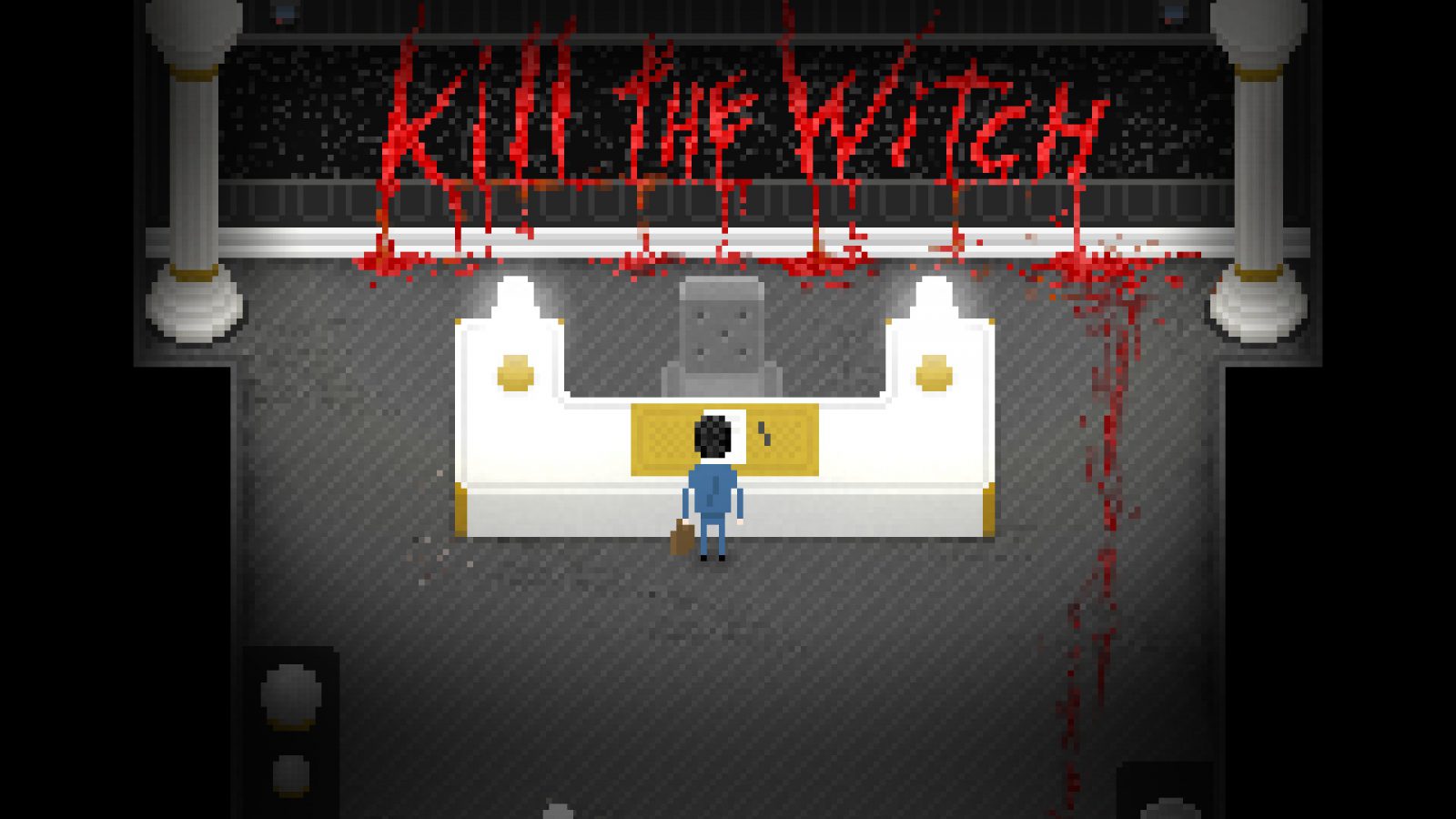 Working in a corporate office can be hell, and Yuppie Psycho makes that sentiment literal. The game puts you in the sensible Oxford shoes of Brian Pasternack on his first day of work at Sintracorp, a megacorporation that goes beyond exploitative into straight-up sadistic, where no one seems to know exactly what their job is.

Yuppie Psycho is essentially a point-and-click adventure game with light action elements, though it doesn’t slot neatly into any genre. You’ll control Brian (in a pixelated form that barely resembles his more interesting anime-inspired look in cutscenes) as he navigates his first day at work, trying to make friends in his office, navigate the bureaucratic labyrinth, and just figure out exactly what he is he’s meant to do there. If the anxiety of his first day at work wasn’t enough, he also finds out that the company is being terrorized by an all-powerful witch and he’s expected to stop it. 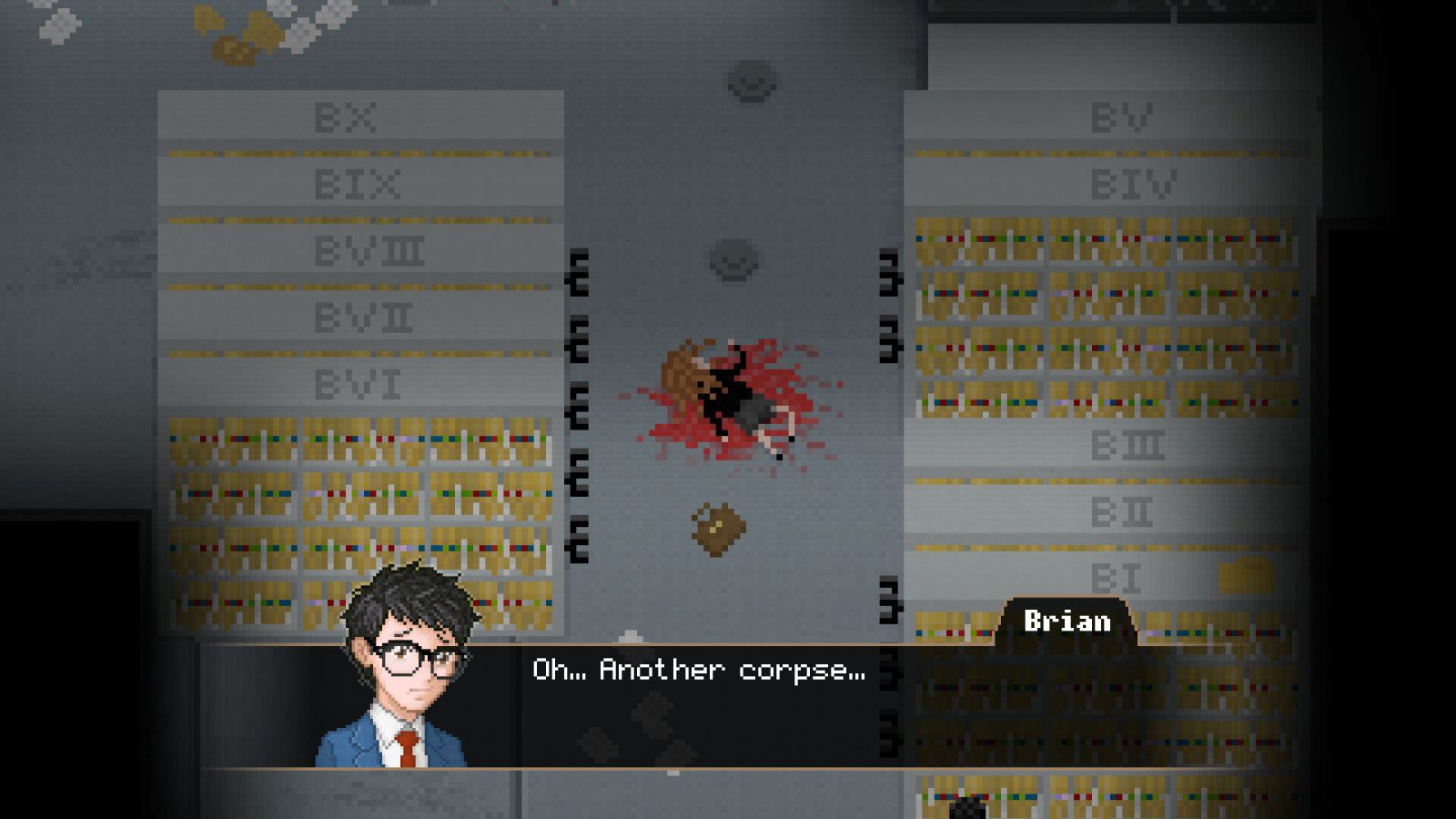 Set entirely in a 10-story office building, Yuppie Psycho a very narrative-driven affair, with more straightforward puzzles than you may be used to in point-and-clicks, which was fine by me. You can almost always find what you need to progress in your immediate area, provided that you think creatively enough about what’s around you. I can’t say that any particular puzzle really stood out as brilliant, but they’re all pretty satisfying. More satisfying than actually solving the puzzles was just exploring the office to find them. The Sintracorp building is scattered with eccentric characters and terrifying monsters, which you’ll encounter in equal measure as you search for the way forward.

When Yuppie Psycho does veer into some of the more nonsensical mechanical tropes of adventure games (like requiring you to find sleeping pills at one point with no clue about where they could be or suddenly making a long-forgotten item in your inventory key to your progress), it starts to lose its way. Most of the time, solving puzzles feels like you’re investigating some strange occurrence at the office and your actions feel reasonably like what someone searching through the archives of a haunted library would do. The few little diversions where it throws logic out the window and just has you track down some random item feel overly prescriptive and break the flow of the story. 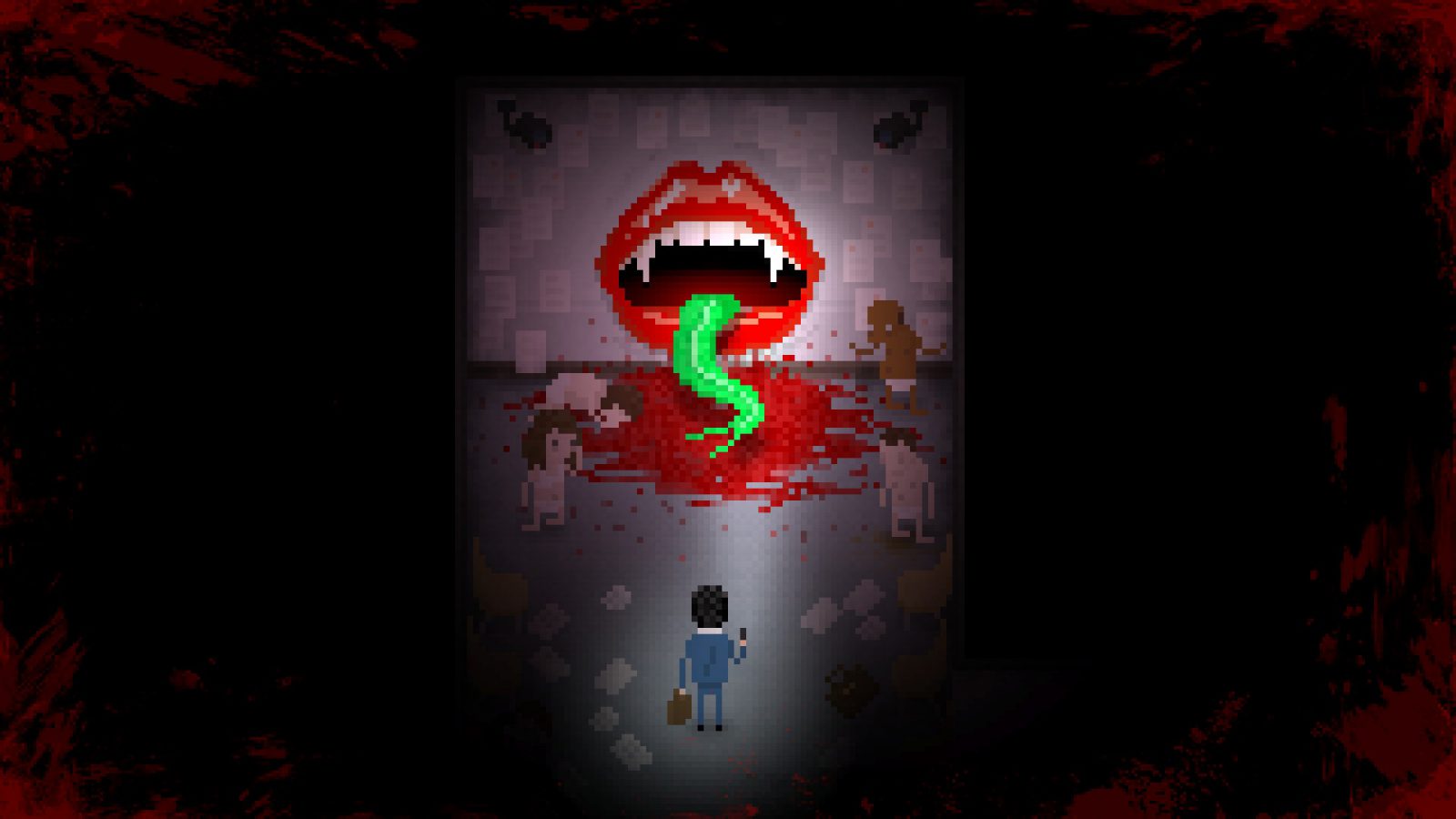 Scattered throughout the game are more action-oriented sequences akin to boss fights. Brian isn’t equipped for a fight, so these require you to use the environment to fight your foes. For the most part, these fights rely on some interesting ideas, but aren’t that fun in practice. You end up spending most of the time during these encounters just waiting for your enemy to be in the one position that allows you to act.

Even outside of boss fights, Yuppie Psycho has an odd emphasis on unceremoniously killing your character when you’re just wandering around. The game is full of enemies hiding in the dark or obstacles that will kill you without warning if you approach them wrong. It felt strange to me to make health management such an integral part of the game when you’re given such limited access to healing items, and it just felt a bit like a cheap solution to add tension when the rest of the game felt more clever. 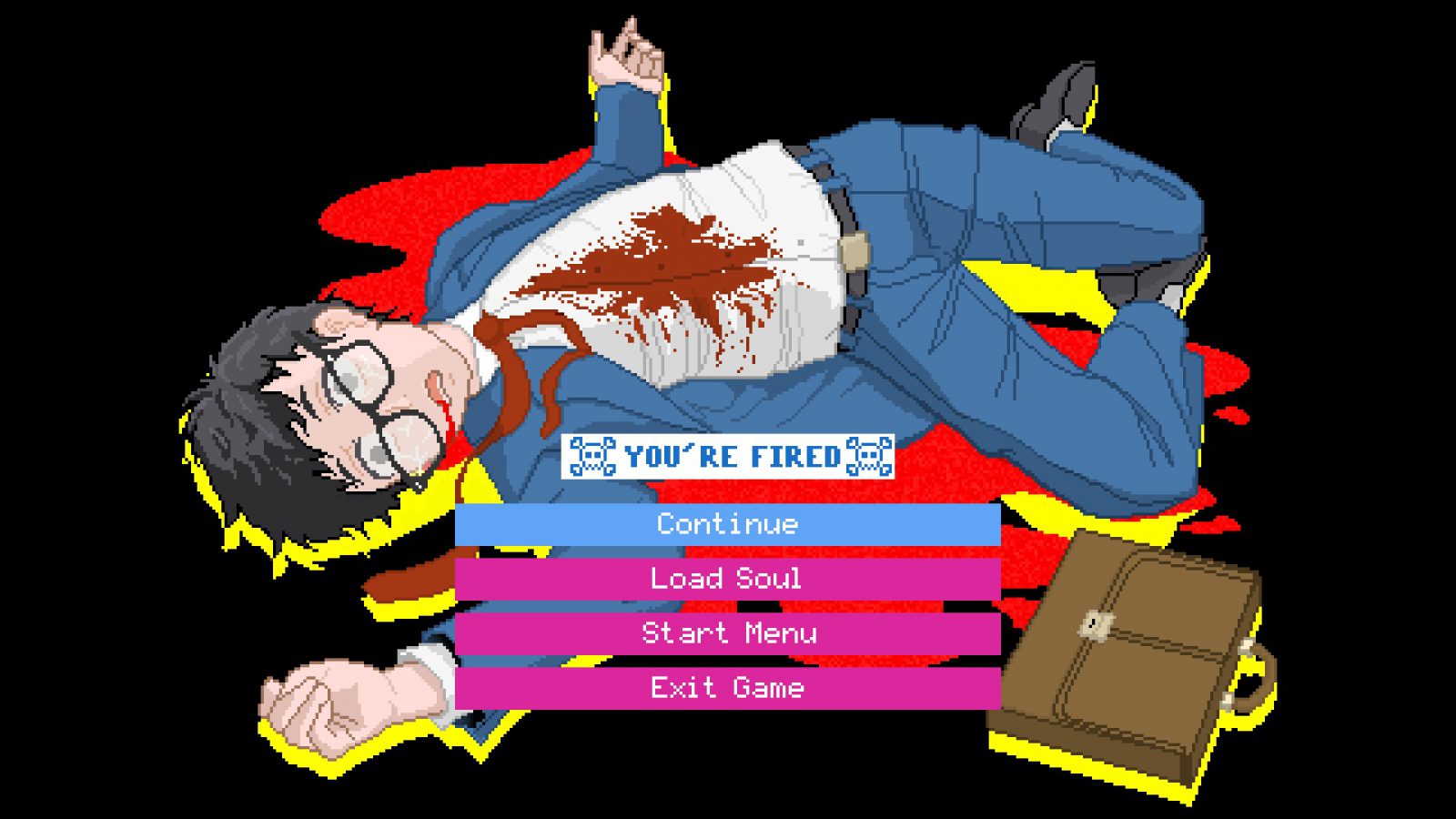 To make matters worse, Yuppie Psycho has a restrictive save system that makes you use a consumable every time you want to save, and only allows you to save in certain locations. The actual mechanic is cool — you photocopy your soul with enchanted paper to save your game — but it leads to a lot of replaying dialogue sequences and walking through puzzles you’ve already solved just to get to the point where you died. Having to decide when to use one of these limited items did add tension, but only in the sense that I didn’t want to waste my time if I died.

What keeps Yuppie Psycho together despite its frustrations is its excellent writing. It’s a smart, if extremely unsubtle, corporate satire that kept me playing more because I wanted to see what absurd situations would develop next than because I found the gameplay that exciting. While nothing about the gameplay made a huge impression on me, there are some story beats in Yuppie Psycho that I’ll be thinking about for a while. An early scene where an executive on horseback gives a motivational speech to a room full of worker drones gleefully shouting “We are trash!” for example, or a breakroom birthday party that goes deliriously wrong. It goes to some truly bizarre, disturbing places that make it worth the sometimes aggravating journey there. Its characters are genuinely sympathetic, and a few of them really grew on me. By the end of the game, I was more concerned with seeing their stories through than beating the game. 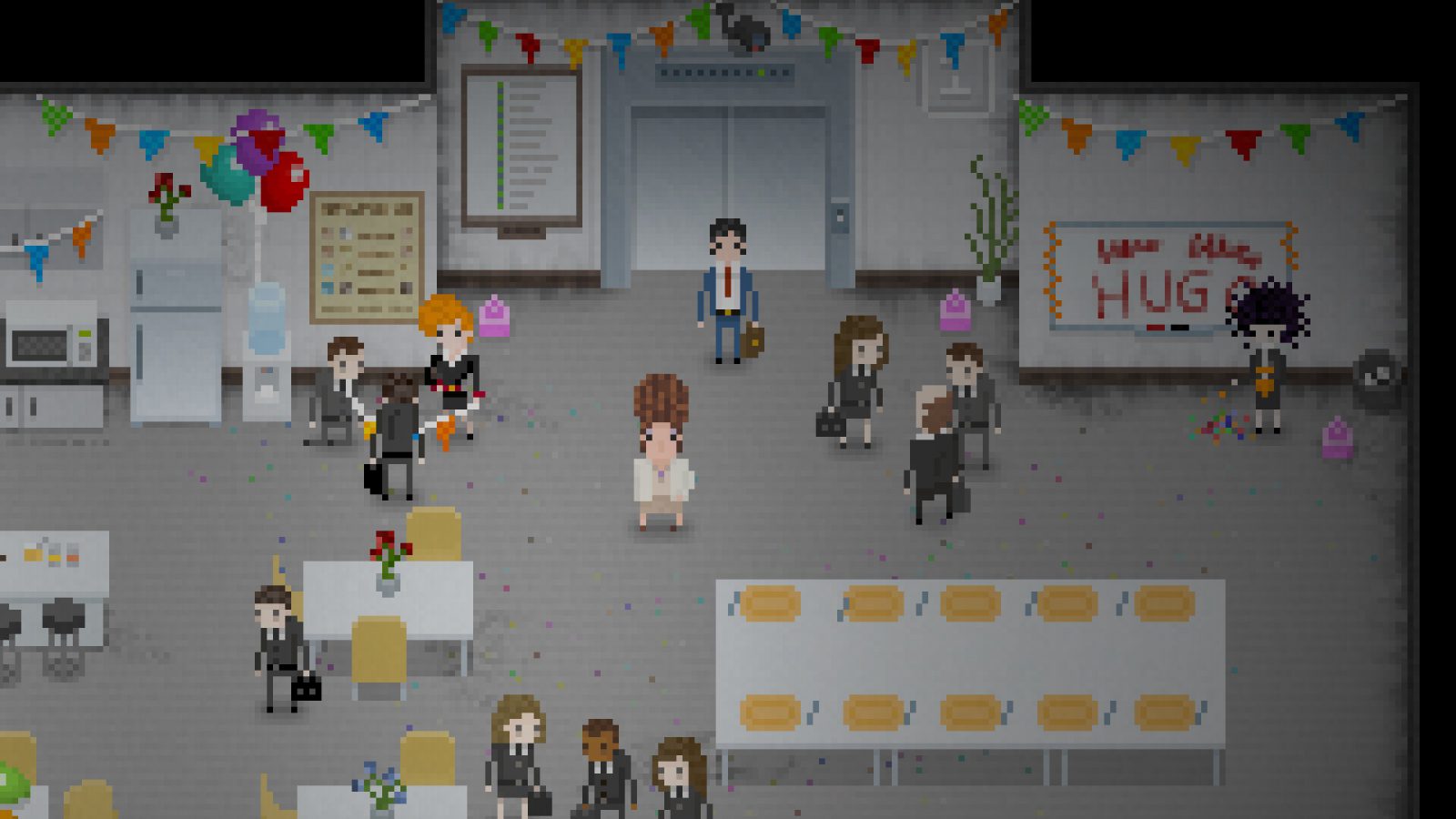 It’s more than just a collection of Office Space hijinx, though. Despite its somewhat cutesy presentation, Yuppie Psycho is a horror game. When things go bad, they go very bad. Instead of stopping at just making jokes about the dread and apparent futility that characterizes bad office jobs, the game transforms them into existential threats. Sintracorp is literally strewn with the bodies of unlucky employees.

Working in a corporate office with its own rules and hierarchy can feel like leaving normal society altogether and delving into some form of cult. Arcane rituals beyond your understanding are being performed around you at all times. Why are we all standing during this meeting? Why does no one ever touch this particular coffee mug? Why does this printer demand blood sacrifice to do its job? In real life, it can feel like only some sinister eldritch plot could explain the dysfunction of your office, and in Yuppie Psycho, that’s true. 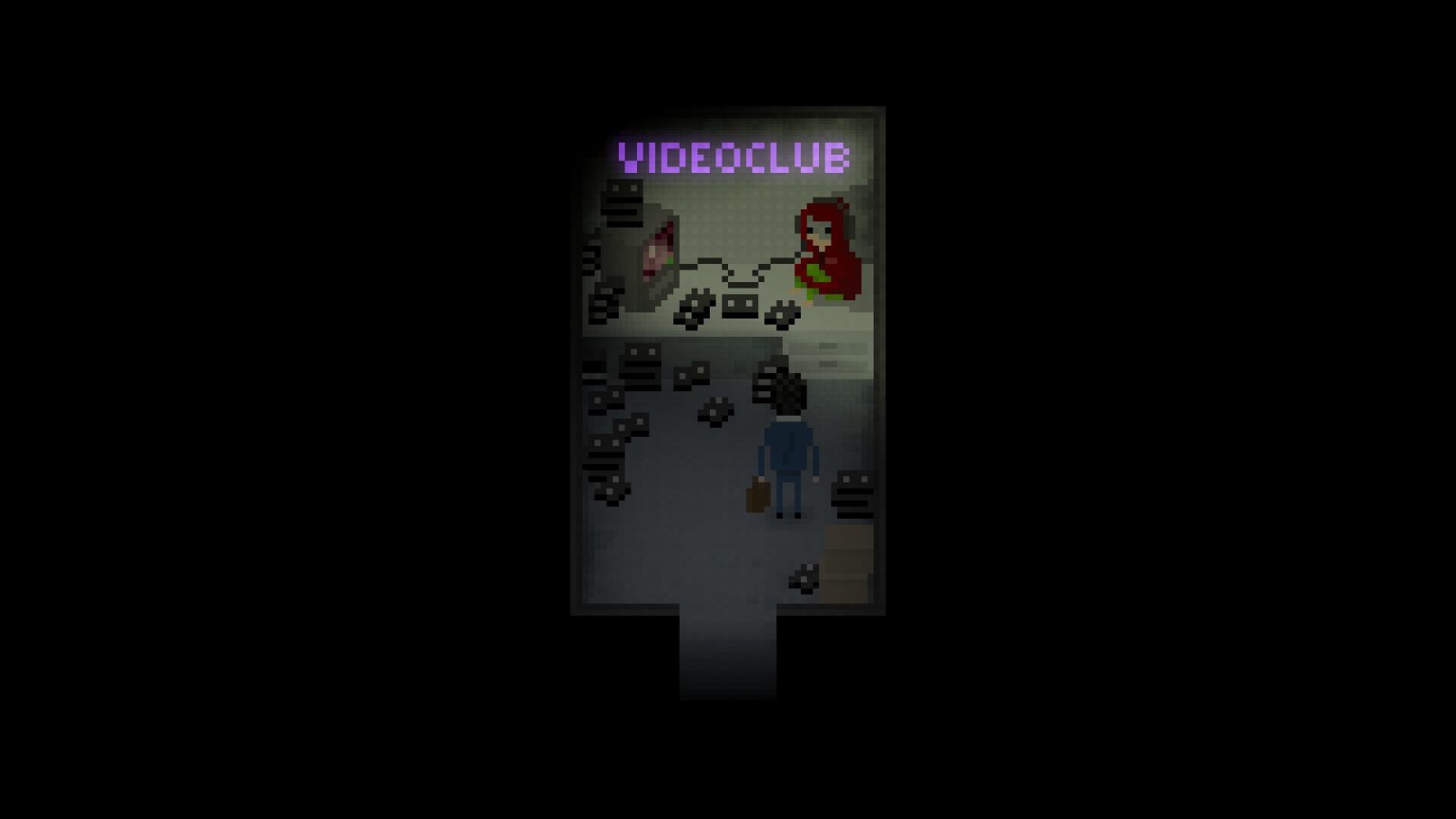 Beneath the buttoned-up, highly codified norms of office life, there often lurks the threat of violence. Unexpressed anger over this slight by an office mate or that indignity from a manager roils under the surface. Even being too nice is suspect in an environment where agreeability can be the weapon that lets one worker triumph over their fellows to ascend to the managerial sphere. Yuppie Psycho’s early hours portray this tension particularly well. Every action seems suspect, every word a potential warning when you’re tossed into this normal-looking office where there’s clearly something very wrong going on. Trying to work out which of your coworkers is conspiring against you and what mundane office equipment might actually be a death trap is a thrill.

Sintracorp is what happens when a large corporation replaces its investors with a supernatural power. In the same way that any capitalist enterprise must extract more from the workers who make its existence possible than it gives back to them, Sintracorp drains them of life, leaves them dead behind the eyes or inexplicably hostile, sometimes literally grinds them up to feed itself. Its character isn’t fundamentally different from the companies that rule our actual lives; only its methods have changed. The same thing that made Sintracorp powerful also makes it dangerous to the people who keep its machinery running and constantly threatens to consume the whole operation if it’s not placated. 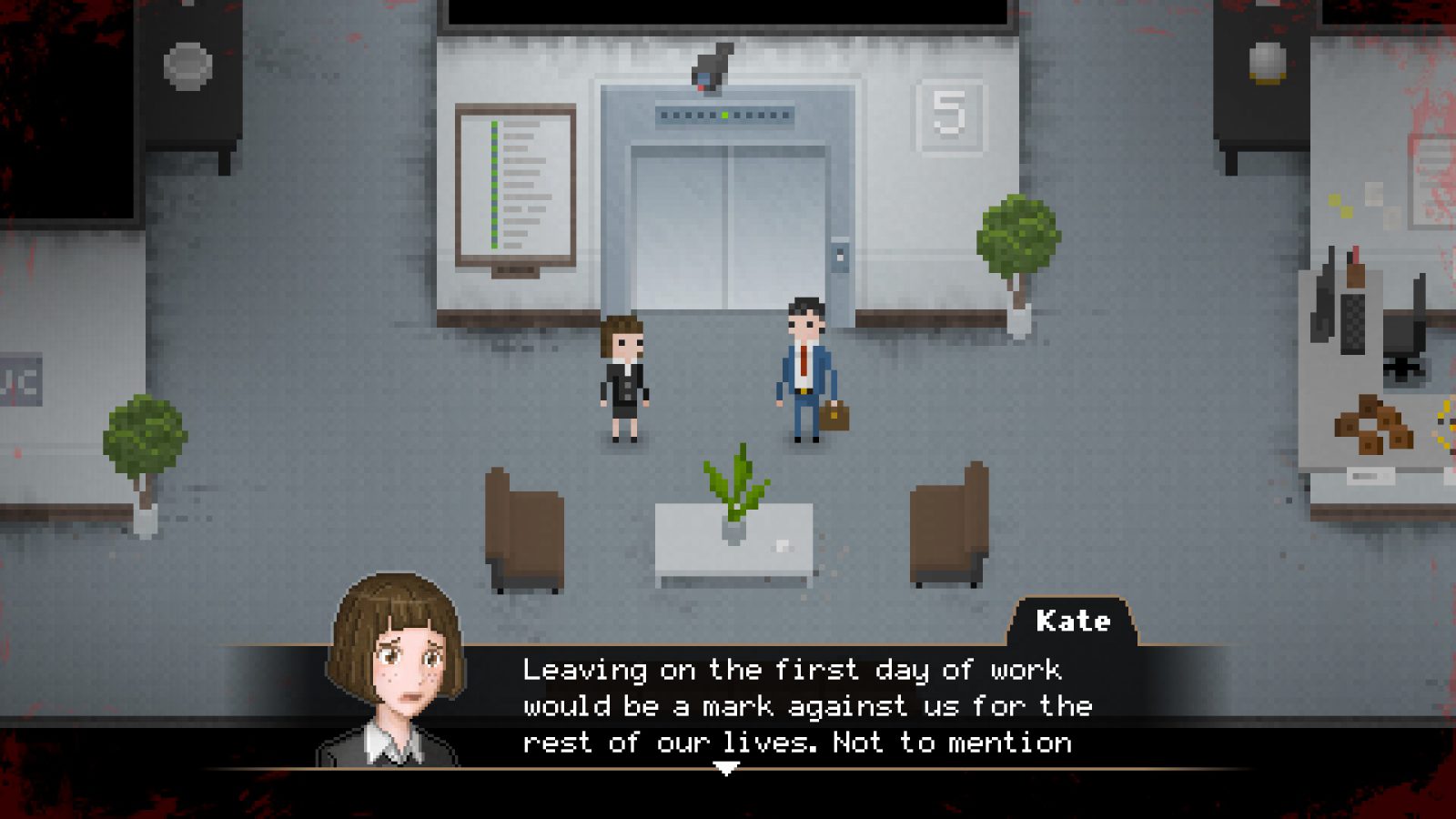 But like in any job that you wish you could leave, something keeps Brian Pasternack at Sintracorp. Pointless commendations, middling raises, the fear of having to find another job, that one coworker who makes it seem worth staying, or simply not wanting to rock the boat. Some of my favorite moments of Yuppie Psycho weren’t even about its creepy atmosphere and fantastically disturbing story, but the small gestures of friendship between Brian and the few friendly faces in the office. It was touching to see friendships flourish among Sintracorp’s underlings, even as the devil bared down on them, and extremely relatable for anyone who’s ever had to seek solace from a miserable job in office in-jokes and parking lot trash-talking sessions with work friends. Through Yuppie Psycho’s multiple endings, Brian does eventually get the chance to upset the corporate order or simply leave and find some peace outside the office. Despite some of the frustration on the way, I’m glad I stuck with this dark, weird, funny game to get there.

Yuppie Psycho turns a workplace satire into a survival horror adventure, and does right by both parts of that strange formula. Despite some frustration from its punishing difficulty, Yuppie Psycho is a surreal but cogent parody that’s well worth clocking in for.

A committed indoor kid, Bryan moved from Pittsburgh to Los Angeles for a prettier landscape to ignore. They can be lured outside with promises of taco trucks and film festivals, and enjoy trawling through used book stores for works on the occult. Bryan has been gaming since the SNES era and is a sucker for good pixel art.
Related Articles: Indies, Yuppie Psycho
Share
Tweet
Share
Submit