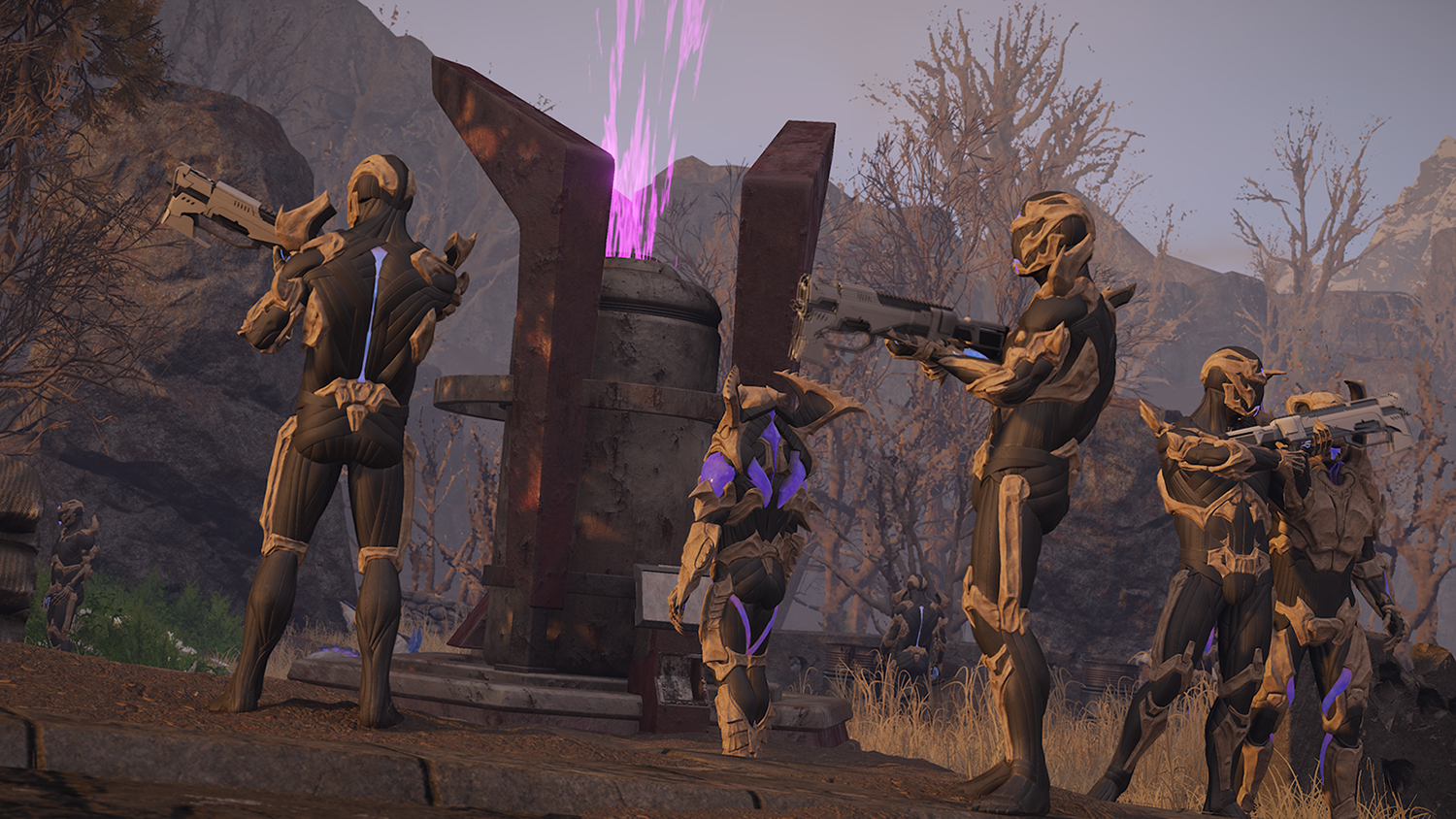 Jax is back and an all-new very powerful threat has emerged in Elex II. Return to Magalan in this open world post-apocalyptic RPG from developer Piranha Bytes, the team behind the Gothic and Risen games. In this action-packed sequel, you will need to stay on your toes – and try to focus, because every decision you make will have an effect on how it all ends. It will be up to you to restore the balance and unite everyone against this common enemy before all life is extinguished.

Elex II picks up six years after the events of the first game, though for some the memories remain fresh. After taking down the Hybrid, Jax goes into isolation, shirking his responsibilities and shutting out the world, including his own family. That is until a meteor destroys the hut he’s been living in with a thunderous crash and Jax is thrust once again into a war for survival. The Skyands have come, falling from the sky, and are unleashing dark Elex on Magalan, threatening all life. And, as Jax, you are also affected, trying to maintain control of your own sanity and fighting against your own decline.

Against what appears to be insurmountable odds, you are tasked with rebuilding a broken world, one that is heavily divided not only by the previous conflict, but also by varying ideals across the factions. When the game starts off you are weak. Your gear and possessions were destroyed in the initial invasion so you have to build up your arsenal again in order to defend yourself. However, Piranha Bytes doesn’t make this easy for you. As is typical of their games, the world is very unforgiving, and monsters can easily take you out in a single shot. You will have to be careful as you navigate through forests, across rivers and streams, and over mountainous landscapes. 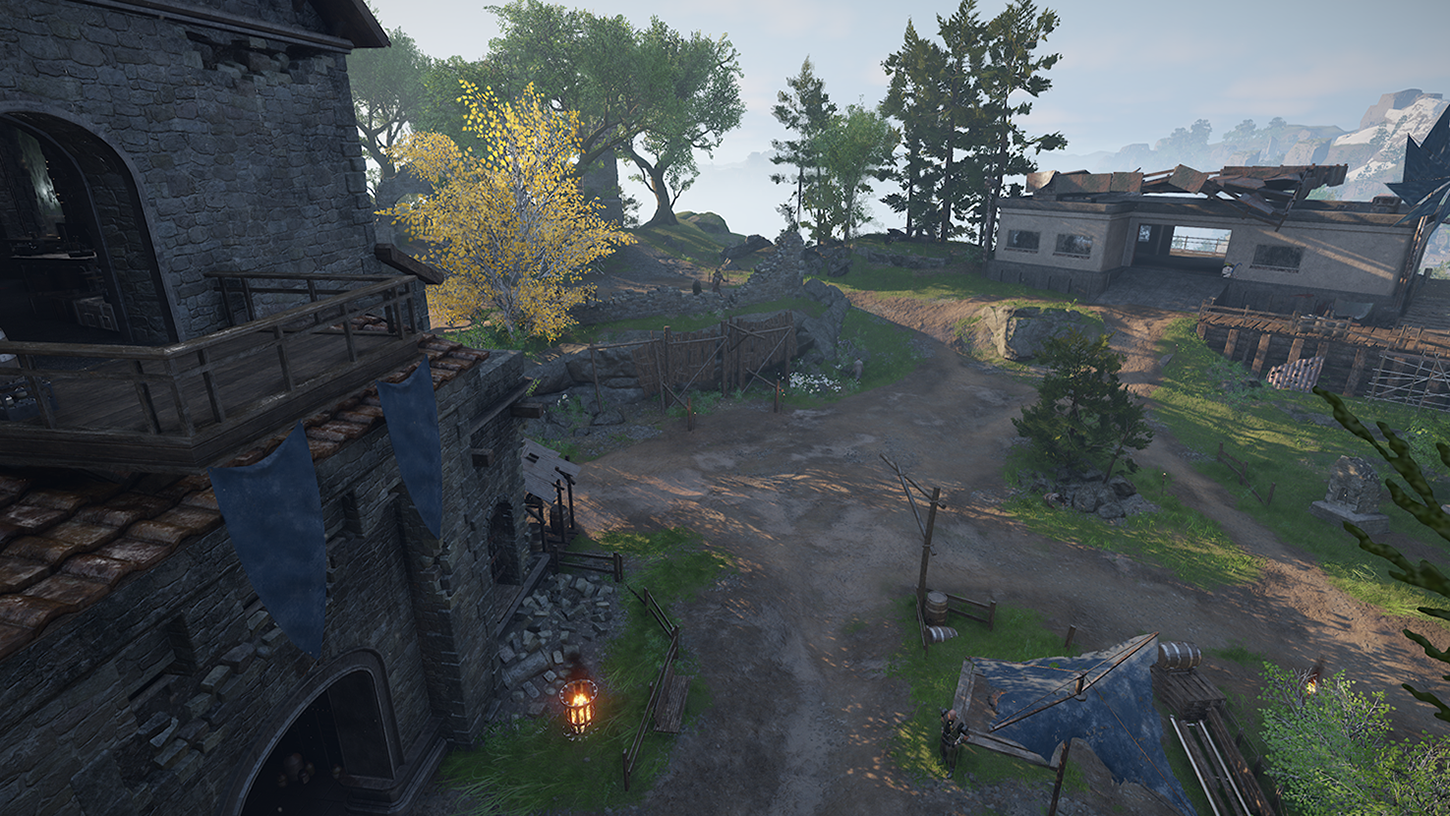 Right away you make an unexpected ally, honestly the last person you would expect to be pairing up with in this new fight, and set up a base of operations at the Bastion. From here you will be able to craft most of your upgrades, conduct research on dark Elex, and launch major operations, all the while building up your ragtag group of comrades in arms. This is also where those you have recruited will stay, awaiting your next orders and making preparations of their own. Some may even approach you about concerns they have, taking you out on side missions to help you earn a little more experience points and maybe even grow your relationship with the individual.

The world of Magalan is truly a spectacle. The vintage aesthetic adds a real charm to the game and I often find myself just admiring the vistas and marveling at the creatures the team at Piranha Bytes have created (there’s literally a monster called a Critter). While the dark Elex is definitely taking a toll on the wildlife, the world is still beautiful. You can still walk through lush green forested areas and across snow capped mountains. The best part is that you don’t have to wait in loading screens as you are able to seamlessly travel across the entire map, even when using the fast travel teleporters you find while out exploring. The ease of traversal comes in handy when you are running low on potions and other resources and need to get back to town. Improvements were also made to the jet pack, giving you the ability to really fly instead of just hovering.

One of my favorite things about the game was how the world felt truly alive. Your interactions with other characters as well as any actions you took, like bandit camps you cleared or simply picking up a potion bottle, have a permanent effect on the rest of the game. What I found the most interesting was following the characters around after completing a mission with them to see what they would do next, and they would just start interacting with each other. In one mission you come across a defector who you have to talk back into returning to the Fort. Later on, you can actually see that character meeting with a gate guard to discuss his return. Typically moments like these happen “off camera”, so to say, and we don’t actually get to see these interactions as the player. It really adds to the experience and you get to see firsthand how you are affecting the world around you. 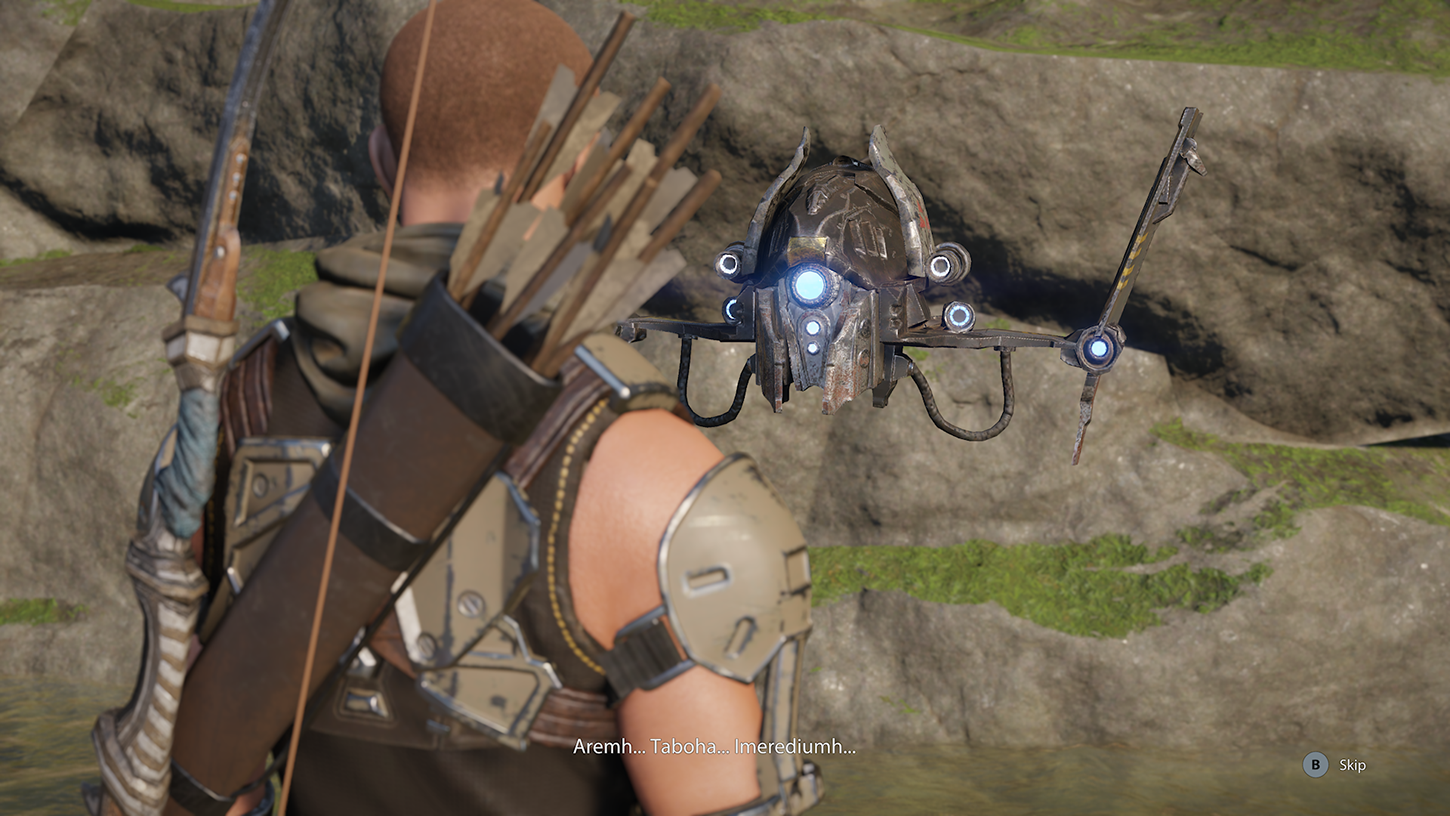 Like many games, Elex II also has a morality system, and everything you do, everything you say, can change the course of your adventure. Characters throughout the game will remember what you say to them, how you react during your discussions, as well as how you conduct yourself. Every settlement you go into has a list of rules, primarily among those being not to steal. If you get caught, you may find yourself on the wrong side of someone’s blade. But also taking on side quests for some of these characters can be a way of getting them to side with you and join your cause. Some of them might even offer to teach you a thing or two, for a few shards of course.

Part of the joys of that morality system is trying to find a faction to help you in the fight, but not all of the factions like to play nicely with each other, or with you for that matter. Chief among them is the Albs, whose vision you destroyed when you took down the Hybrid. You are looked at as a traitor and it will be no easy task trying to gain their trust again, but doing so would be very beneficial to you as you would gain access to their knowledge of consuming Elex to enhance your abilities, although at the sacrifice of your humanity. On the flip side of the Albs, you have the high and mighty Clerics, who are struggling to survive and provide for themselves after the previous conflicts. The Clerics also use Elex, but they don’t consume it. Instead they use it to power unmanned war machines and have even developed deadly plasma weapons. They are the most technologically advanced of all of the factions.

Caja, your closest companion and mother of your son, Dex, is part of the Berserkers, the medieval fantasy dream. Berserkers want nothing to do with technology, but instead use Elex to create mana which allows them to use magic-like abilities, such as shooting fire from their hands, causing a burning effect. Then there are the Outlaws, who use Elex to create powerful drugs. They have mastered using scraps and turning a profit wherever they can, and make use of any technology and weapons they can get their hands on.

A new faction is introduced in Elex II, the Morkons. Survivors of the meteor strike that injected Elex into the world over a century and a half ago, the Morkons took shelter underground, slowly evolving into a vicious faction with a violent god. They are weary of any newcomers, anyone who could disrupt the fragile balance they have created. They want nothing to do with the outside world and hope for the destruction of all those who don’t believe. Trying to get any of these factions on your side will be a challenge, but joining a faction might just tip the scales against the Skyands in your favor. 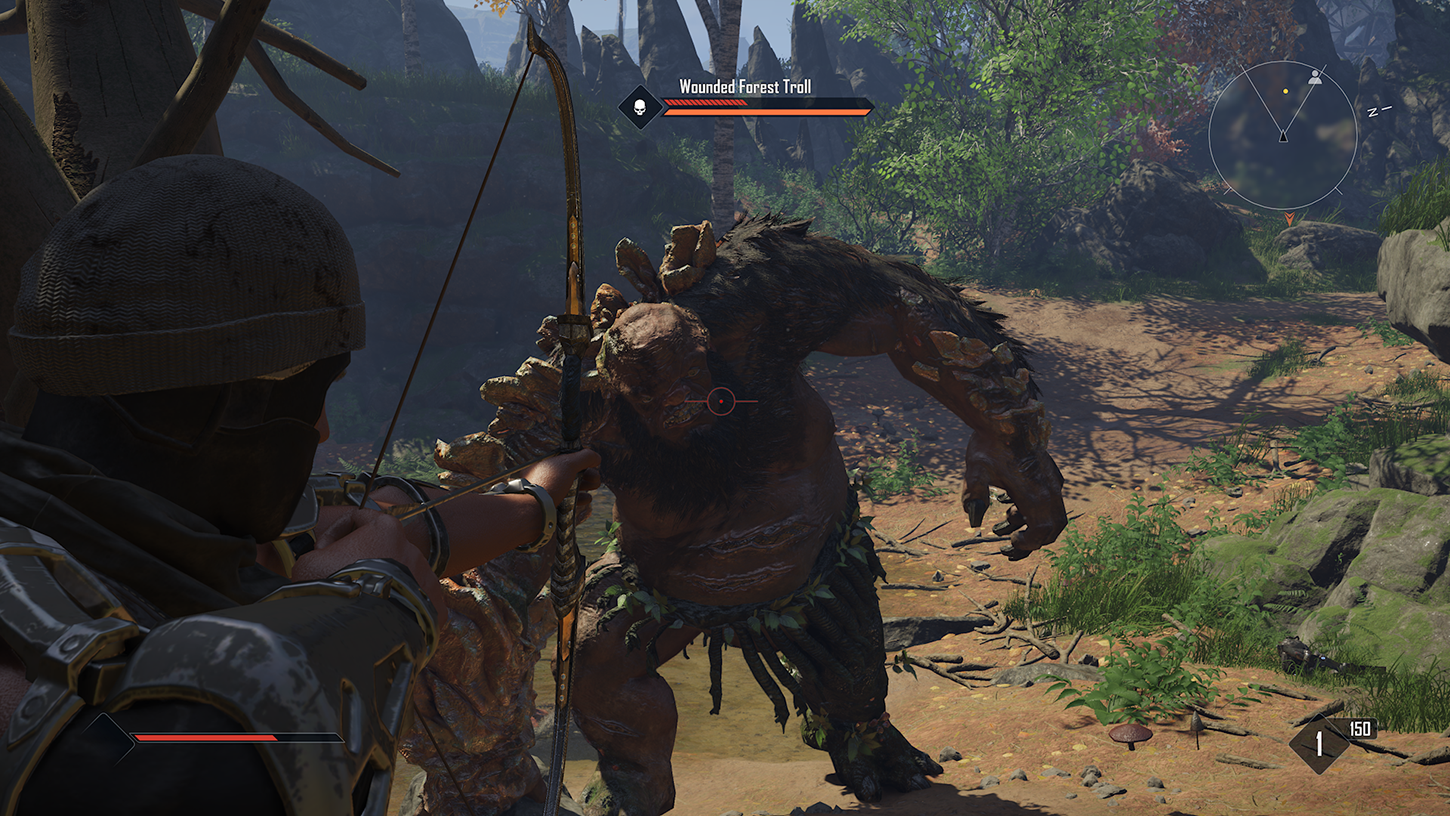 One of the biggest struggles I have had while playing Elex II is trying to get the upgrades and skills necessary to help me be successful in combat. It’s a multi-step process trying to get these skills and upgrades that can be rather tedious at times. There are six accolades you have to level up. By doing so you unlock better abilities and you get to use better, stronger weapons. However, in order to learn the abilities that allow you to continue further upgrading weapons you have to find someone to teach you that specific ability, as well as finding someone to teach you to pick locks, brew various potions, and many other vital skills. Even after playing the game for over twenty hours, I had still not found some of these crucial teachers during my quests around Magalan. There’s also some skills you cannot learn unless you join a faction, another obstacle if you should decide not to join one.

Despite these struggles, there have been plenty of times where I would have a sudden explosion of progress. In one particular play session, I had managed to more than double my base of allies, found many of the teachers I had been searching for, and was finally able to get those most anticipated upgrades. The difference it made as I went out on my next expedition was staggering – I no longer had to fear being taken out in only a couple of hits and I noticed that I was more effective at completing my objectives. Every successful experience and encounter left me feeling more confident and fulfilled going into the next. However, I would later get humbled again when I came up against an even stronger foe. Trolls are brutal. 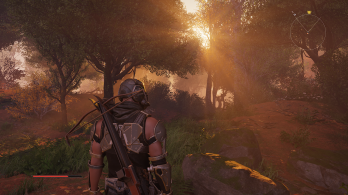 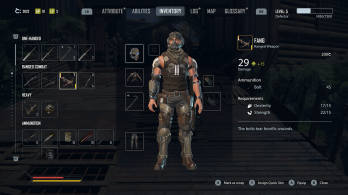 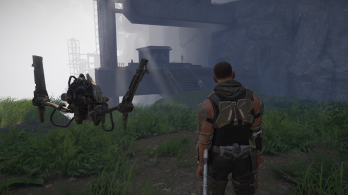 The gameplay is fun and satisfying. Being able to choose between all kinds of different weapon types, melee and ranged, medieval and advanced, truly gives you the ability to play the game your way. I tend to try to take on a more stealthy approach when playing most games, but when that fails, I feel like Elex II does well with giving me an array of options to tackle my foes (I carried at least five different weapons on me) and you almost always have the option to leave, rebuild, and come back to try again later after you’ve had more time to prepare and get some upgrades.

Overall, my time with Elex II has been generally positive. After getting used to the fighting mechanics, learning the progression systems, and just going about playing the game, it’s not hard for me to see that the team at Piranha Bytes have created another masterpiece. That’s not to say that the game is free of flaws. There have been a few occasions, especially further into the game, where my framerate noticeably dropped, and there have been a few times where I have had to relaunch the game because it froze. Luckily these are just minor inconveniences that resolve on their own and I have yet to find anything that breaks the game and prevents me from playing.

To sum it all up, Elex II is a blast, both literally and figuratively. What Piranha Bytes was able to achieve in Elex I they were able to build upon, expanding on a world that lives and breathes independently and because of your character. Aside from those little technical issues, the game is sound. I feel like you could also easily get into playing Elex II without having played the first game. However, if you want to understand all of the references, maybe at least watch a recap video first. Either way, this game holds a lot of promise, especially when you consider all the different routes you can take on your playthrough. Who knows where you’ll end up?

Known online as MzPanik, Cassie Peterson is an editor and part-time content creator, mainly in the FPS and action/adventure genres. She didn't really start playing video games until after graduating high school in 2010, but quickly fell in love, and the rest is history! In her free time, Cassie also enjoys reading and spending time with her kitties, Zoey and Molly. Recently she has also been trying her hand at web development.
Related Articles: ELEX II
Share
Tweet
Share
Submit