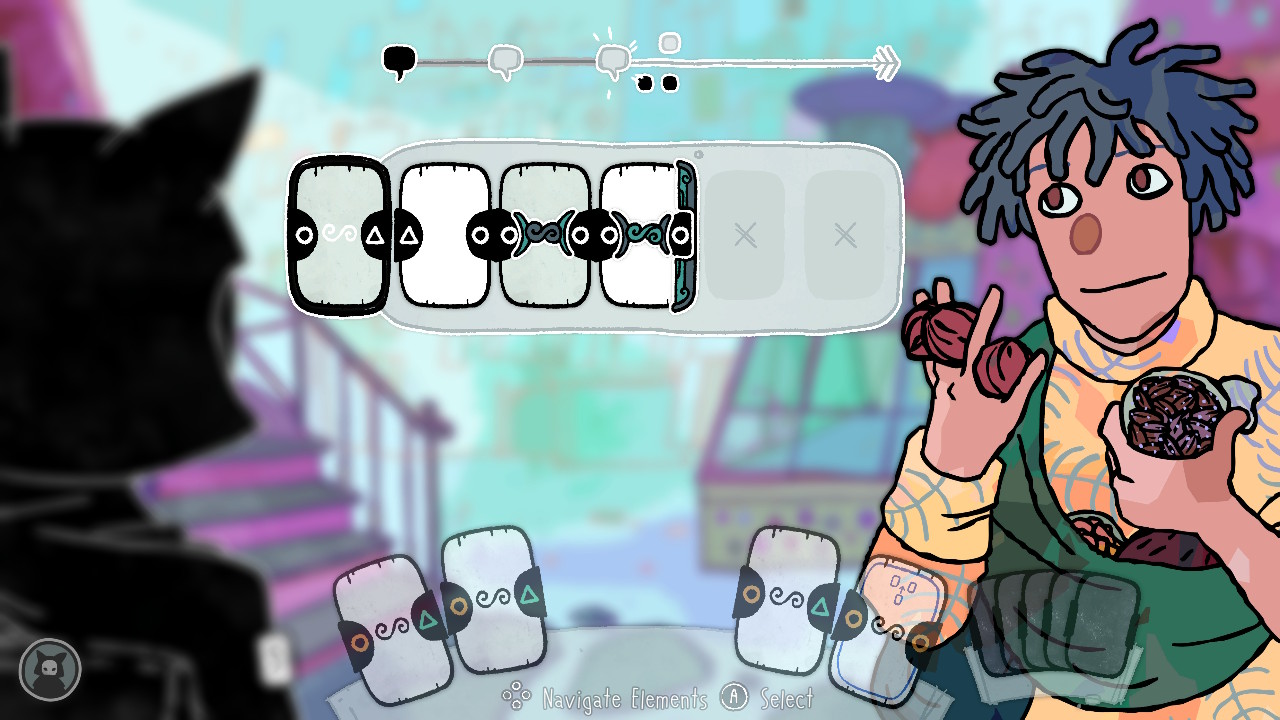 As Walk the Moon had titled their third studio album, talking is hard. That said, it’s a vital part to our society, and while it can be stressful to connect with a new person, the reward for doing so is usually a great thing indeed. Signs of the Sojourner takes that idea and puts it into video game form, in an experience that’s relaxing and thoughtful, if not without its quirks.

In Signs of the Sojourner, you play as a mysterious avatar who’s responsible for a family store after their mother’s passing. There’s also a caravan that travels alongside you, and at the behest of your friend Elias, you are tasked with getting items from around the area in order to sell at your store. As caravan leader Nadine warns you, whether they continue to stop by your store (which helps you by gaining foot traffic) depends on how well you do in the game, which occurs over five in-game trips. Your sole mechanic in the game is having conversations with various NPCs in order to obtain information or trade items you can sell at your store once you return to the home base. 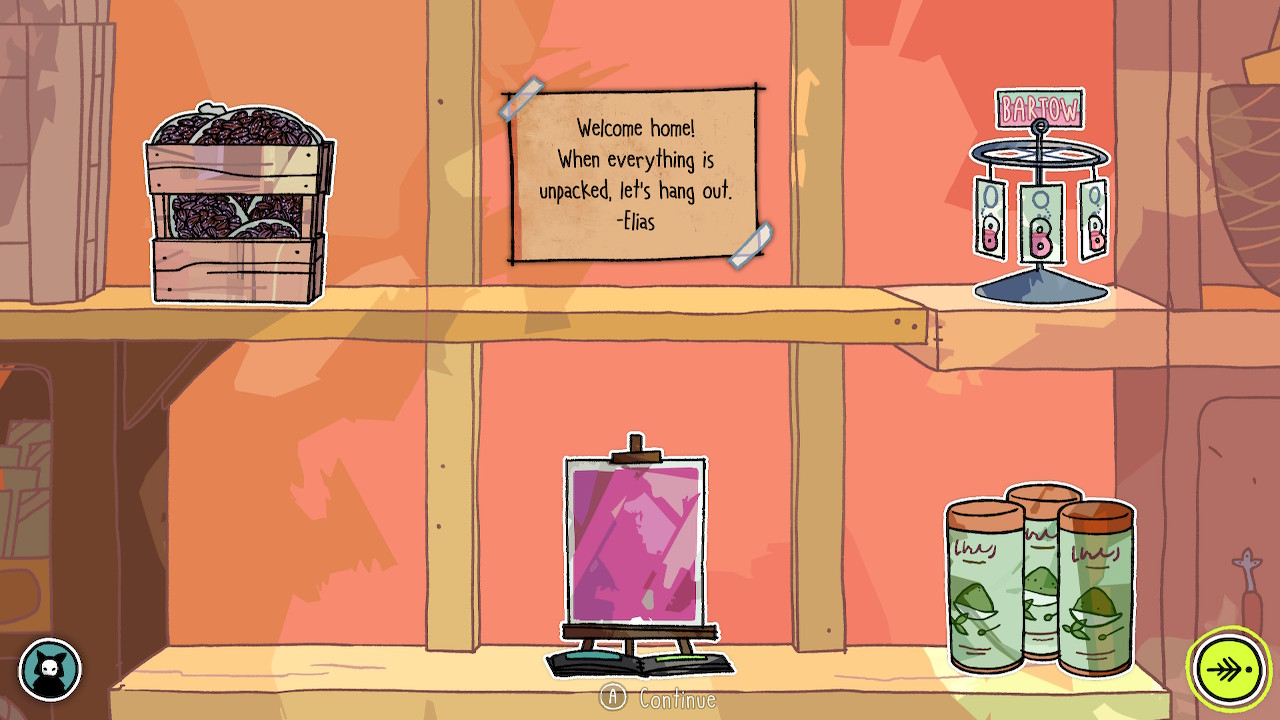 Oddly enough, the innovative deckbuilding mechanics in Signs of the Sojourner are the strongest and weakest point in the game. You have a deck of ten cards with different symbols on them and must chain together links based on the person with whom you’re conversing. Each symbol represents a different facet of personality, from circles highlighting empathy to squares emphasizing direct communication. You’ll be able to see which symbols a person normally has at different stops within a trip, though some characters (like Ramir) will have more than the two symbols presented to you. All of these symbols and conversations have an abstract significance within the main story, and I appreciated how integrated the story and gameplay were to the main gameplay flow.

By chaining together cards with the same symbols (which are linked left to right), you’ll be able to advance a conversation positively, which will grant you information about different routes you can take or some pieces of dialogue that will affect your relationship with the current person. However, this is easier said than done, since you only have a limited amount of cards you can have at a time (ten, in fact), and every conversation in which you participate forces you to replace one of your own cards that you have with one of your partner’s. Thankfully, there are a ton of different combinations and effects that will assist you in this task, from cards that will allow you to see what’s in your partner’s hand to a card that will shuffle your own hand once it’s played. You can also activate accord (which is granted when you have four of the same symbols in a card chain), which can give you a reprieve should you misplace a symbol. 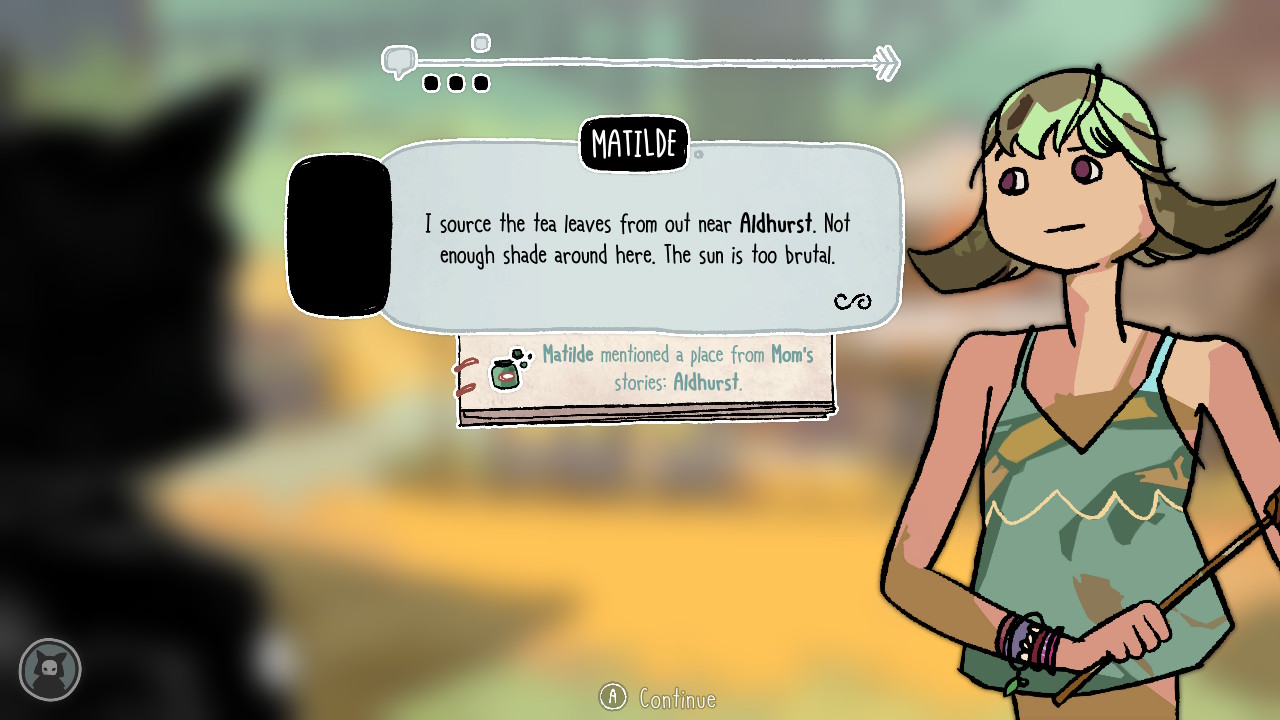 Mess up or don’t have the right symbol to continue the flow of the conversation? Unfortunately, the conversation will turn sour, and depending on your interaction, you only have a couple of chances to set things right. This is where the game has tension, as you don’t know exactly how your partner will react and they can mess up a chain as easily as you can. While it’s generally a good strategy to succeed in a conversation, some interactions will give you some vital information by failing (and there are some people with whom you don’t want to associate or support), so purposefully messing up is also a strategy. Again, this is all narratively woven into the plot masterfully, and I applaud how innovative the main gameplay loop is. Some characters are cold and aloof, which means you’re definitely going to have a hard time catering towards them; however, as Nadine points out early on in your run, “You can’t please everyone”, and boy is that true with your card selection.

You see, as you venture through the five in-game trips, you’ll start to understand the importance of catering towards a certain communication strategy. Do you highlight your early-game empathy and miss out on the riskier narratives at later points in the game, or go all-out with creative and direct symbols but burn your bridges in earlier locations? It’s an intriguing approach to roguelite mechanics (mainly due to the fact that you can’t go back to previous decisions without starting the game anew), but this is where it gets a bit murky. 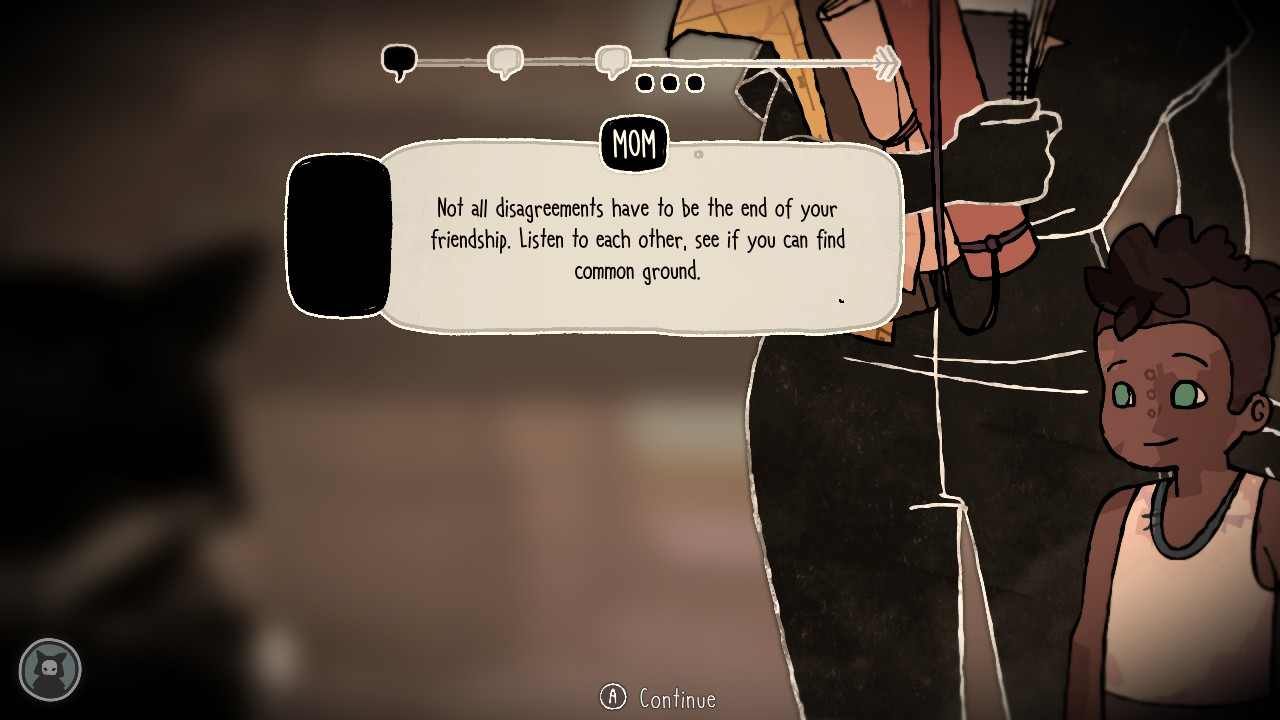 I do understand the importance of tying in the game’s ideals of communication being vital to the success of one’s personal journey, and it’s difficult to get some to open up, but there are also a few mechanics of the gameplay loop that are more frustrating than narratively appropriate. Take fatigue cards for instance; as you travel across different locations on the map, days will go by and you’ll acquire fatigue (since traveling with a caravan is admittedly exhausting). These cards will immediately break your chain unless you’re currently on an accord with your partner, but even if you survive that, it will break the next chain too.

Considering most conversations only have around 3 opportunities for you to mess up, spending 2 on a move you don’t want is heartbreaking. Doubly so if you absolutely need a conversation to go well in order to advance a plotline. This gets worse later in a trip, since you’ll be stacked with 7 or 8 fatigue cards; keep in mind, you only have 10 regular cards normally, which means you might have half a deck of duds that I guarantee will mess you up. It doesn’t help that there are scant  few ways to get rid of fatigue (but one of them involves a dog, so that’s nice), so this mechanic is needlessly restrictive. I wouldn’t mind this if not for the fact that again, you can’t really go back to previous points in the game without restarting all over (and since NPC events are random, it’s not a guarantee that you’ll be in the same circumstances). 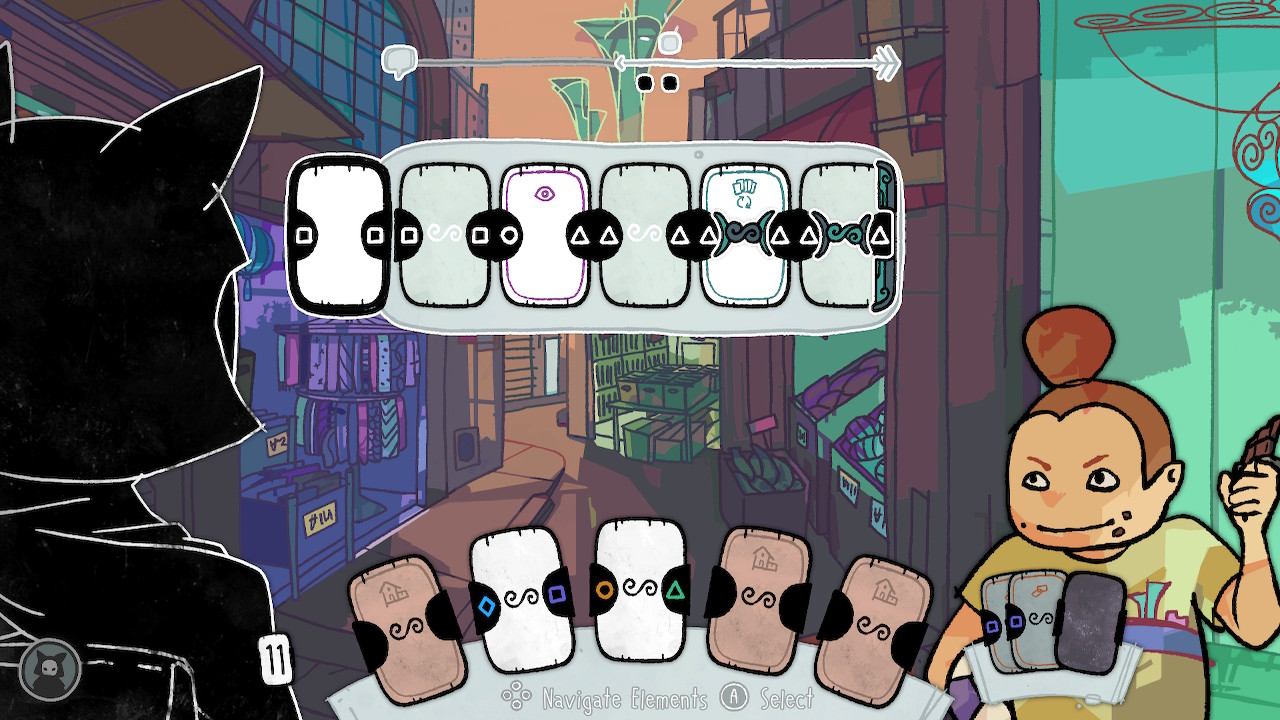 That said, the presentation and story of Signs of the Sojourner are gorgeous, with each character having their own personal narrative arc and personality in terms of symbols. While there were some characters (specifically those that emphasized the direct square symbols) I dreaded trying to chain cards, every person (or animal, or… robot) was still interesting to talk to, and I wanted so hard to try and please them all when seeing them again. (Obviously I couldn’t do that in the same run, but hey, I could try.) The music and graphics are perfect for the mostly idyllic setting, with the 2D drawn aesthetic popping out in docked mode.

Signs of the Sojourner

Signs of the Sojourner is an intriguing deckbuilder with a great cast of characters and integrated story and gameplay. While there are some glaring flaws with its mechanics, this is a nice relaxing game that teaches the beauty of communication.

Elisha Deogracias is an aspiring accountant by day, freelance writer by night. Before writing for Gaming Trend, he had a small gig on the now defunct Examiner. When not being a third wheel with his best friends on dates or yearning for some closure on Pushing Daisies, he's busy catching up on shonen manga and wacky rhythm games. Mains R.O.B. in Smash. Still doesn't know if he's a kid or a squid.
Related Articles: Indies, Signs of the Sojourner
Share
Tweet
Share
Submit