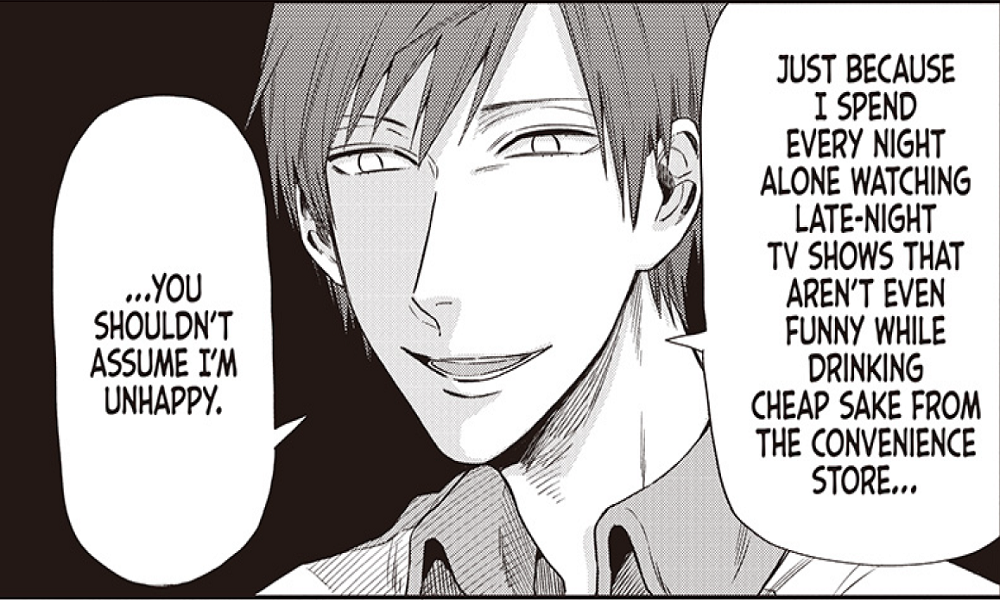 Back when I was a kid, I loved the Canadian TVO Kids block, especially with the hosts that would appear every day. They were peppy and cheery, but as I got older I wondered what they did after the cameras stopped rolling. Turns out even children’s show hosts usually have less glamorous lives than what I was used to, but it was cool to see them happy on the small screen. Life Lessons with Uramichi Oniisan is a series that I hereby dub “the most millennial manga”, with its irreverent satirical style of humor mixed with a whimsical sense of childishness due to the premise, and I can’t get enough of it. 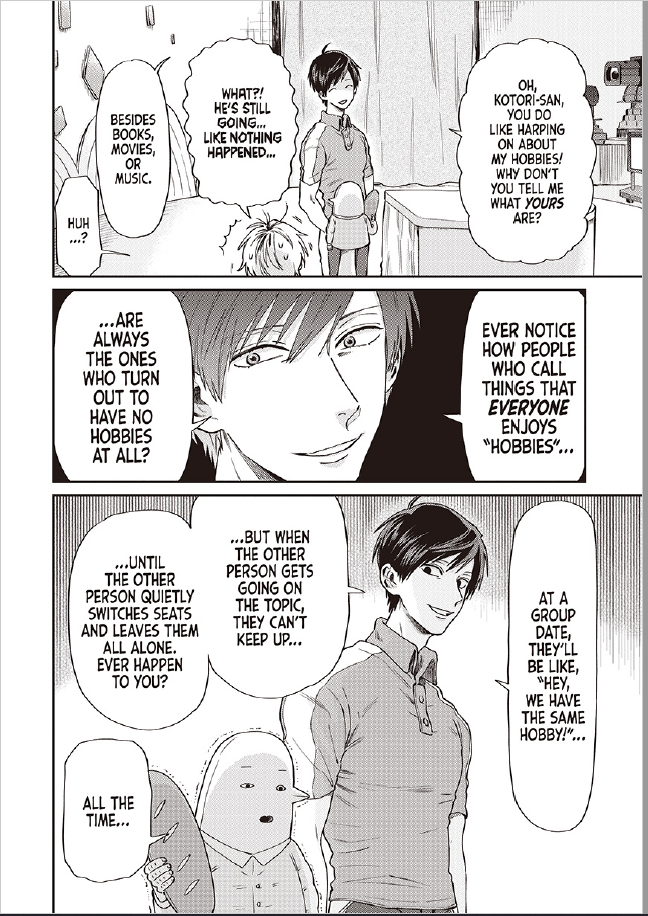 It’s time for Together with Maman, one of Japan’s most popular children’s shows! There are lots of fun hosts that lead the kids to do special things every day. Leading the pack is the exercise leader, Uramichi Omota, otherwise known as Uramichi Oniisan! He’s the one that’s responsible for ABC calisthenics, and in the first chapter you can totally see how energetic he is! Of course, he’s a big drinker, smoker, a disillusioned 31-year-old…

Well, actually it is! You see, Uramichi Omota is in fact an adult that’s saddled with the crushing weight of responsibility, and takes every opportunity to remind the kids on set that yes, life sucks. That said, the children go along with it like nothing’s wrong, and even take him down a peg or two with their innocently brutal questions. The first chapter alone has a kid ask Uramichi why he’s single at 31 while her father is 29 and married. 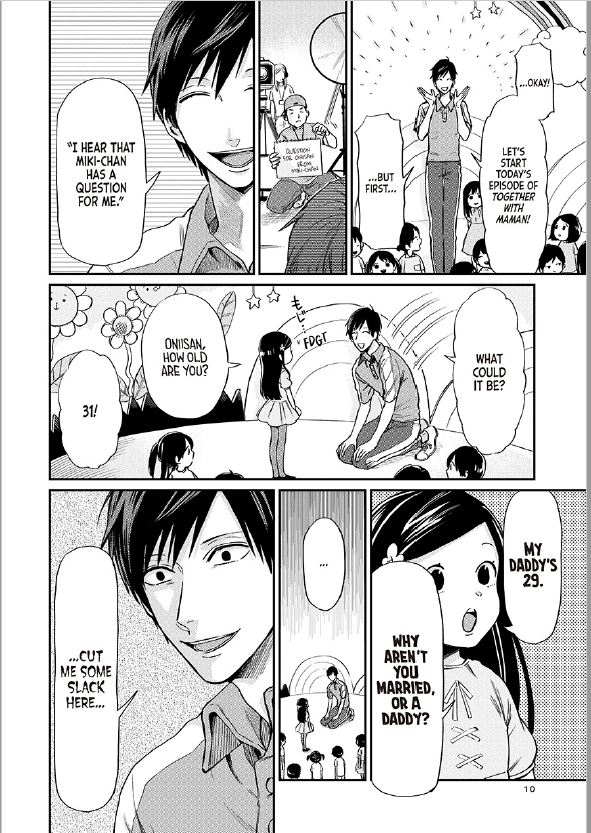 It seems that the other hosts are a bit dysfunctional too; Iketeru Daga is an sheltered airhead with a rich father, Tadano Utano is a former idol singer who crashed and burned, and Tobikichi Usahara is a loudmouth deadbeat who seems to attract the ire of Uramichi. Really, the only sane person in this cast of crazies is Mitsuo Kumatani, and he’s dressed as a bear most of the time. It’s a motley crew of people you wouldn’t expect to lead a children’s show, and yet it works quite well.

You see, while Uramichi and friends hold a bunch of grudges and disappointment in life, they always seem to get it together for the show taping, and this contrast is shown wonderfully within this first omnibus. Uramichi does get the spotlight within the first half of this book, which consists of the first volume. It’s a nice introduction that sets the stage for the rest of the series. It gets a little repetitive around the end of the first half, but thankfully the rest of the book involves the whole cast. You’ll get to see the ins and outs of what really goes on in a children’s show, and the slice-of-life style of the manga is a treat. It feels like an office sitcom around the second half, and that’s nice.

I think my favorite part of this manga is how realistic the main characters are portrayed. They aren’t bright, happy shonen protagonists; they’re just millennial aged adults trying to get by. They’re all flawed, and you want to see them fail as much as succeed; sure, I might not like Uramichi’s downer demeanor the whole time, but the fact that he gets excoriated for this makes me feel sorry for the guy. The second half of this omnibus also delves into some of the backstory of Iketeru and Tadano, and fleshes out the characters organically. That said, it wastes no time making them the butt of a joke in the next chapter. The omnibus ends with flashing back to the cast’s past college lives in the upcoming chapters, and I can’t wait to see how they all interact with each other then. 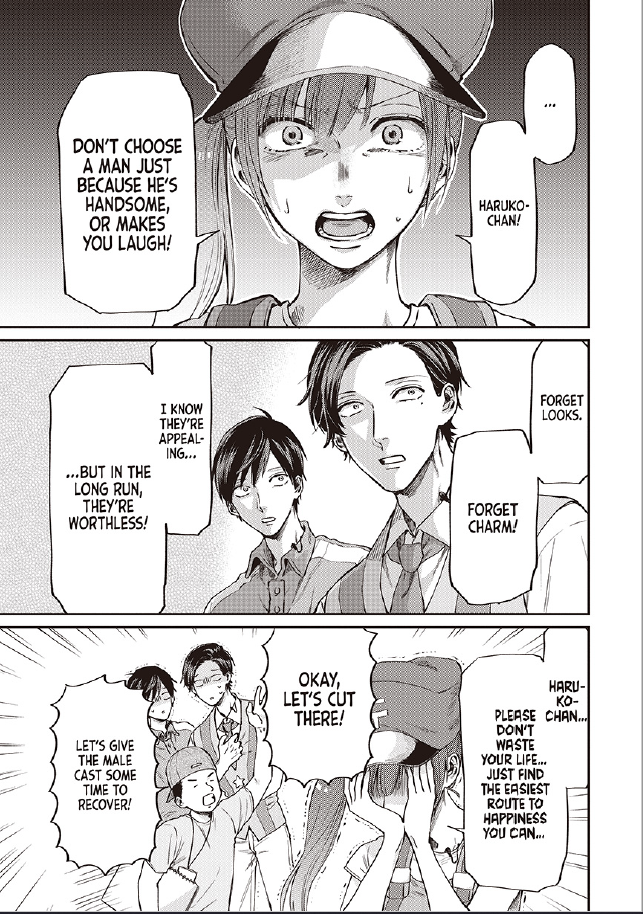 All in all, Life Lessons with Uramichi Oniisan is a wonderful look at the life of a children’s show host, with equal parts biting satire and surprising heart.

Life Lessons with Uramichi Oniisan is a silly manga that highlights the contrast of children’s shows with their hosts. An absurdly hilarious look at its “protagonists” and the misfortunes that arise from their complex characters, this series is worth reading.

Elisha Deogracias is an aspiring accountant by day, freelance writer by night. Before writing for Gaming Trend, he had a small gig on the now defunct Examiner. When not being a third wheel with his best friends on dates or yearning for some closure on Pushing Daisies, he's busy catching up on shonen manga and wacky rhythm games. Mains R.O.B. in Smash. Still doesn't know if he's a kid or a squid.
Related Articles: Beyond the Page, Life Lessons with Uramichi Oniisan Omnibus 1
Share
Tweet
Share
Submit