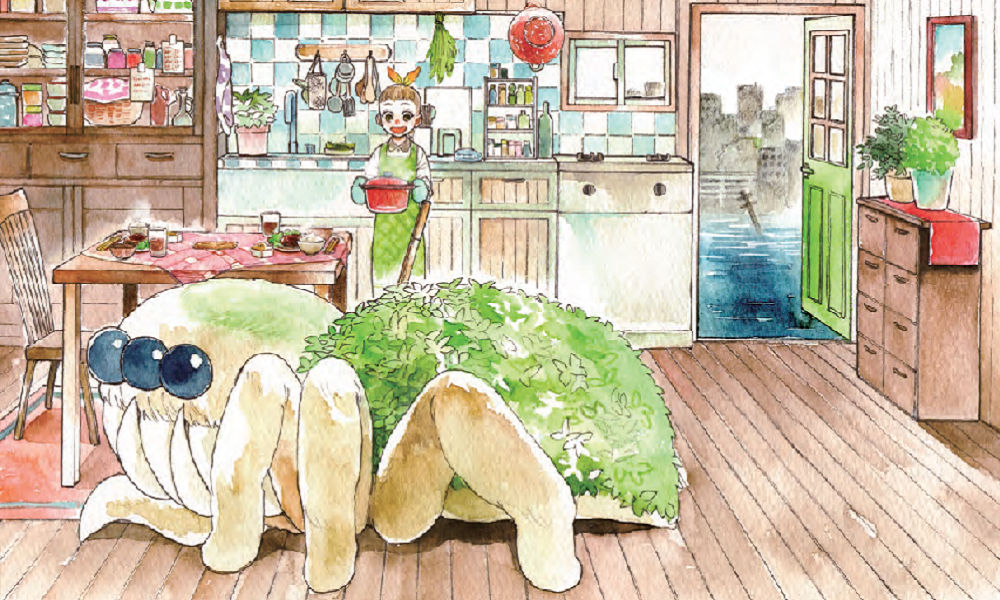 Even though it’s terrifying, the prospect of an apocalypse is entertaining enough to spawn a genre of related media. While there have been many takes on a world-ending narrative, it’s interesting to see how unique the events unfold in different works. Giant Spider & Me: A Post-Apocalyptic Tale decides to take a lighter approach to the end of the world, with a duo of characters that contributes to the cute but ominous nature of the manga.

We begin Giant Spider & Me with Nagi, a young girl who forages a forest for ingredients to cook. During one such trip, she stumbles across a giant spider, which instantly frightens her. The spider follows her while she retreats to her house, and she reluctantly realizes that it is hungry. After making a dish, she finds that the spider enjoys her cooking, and asks it if can live with her. After which, she decides to name her new pet Asa, and what follows is a relaxed slice-of-life story that chronicles the two as they travel around the house, finding food for their next meal. During this time, Nagi also tries to find out what species Asa really is as she learns more about what it eats and how it interacts with her.

While it’s a cute and slower-paced manga overall, there are hints in the setting that imply that everything is not what it seems. You can hear bits and piece of the world outside from Nagi’s monologues, and there’s a city that Nagi is reluctant to visit. It’s also implied that Nagi’s father is still out there exploring the land, but she hasn’t seen him in quite a while. This lonely desolation is felt throughout the volume, and it does have a sense of eeriness surrounding it.

The remnants of an extinct civilization are briefly mentioned as well, and we do get to see a couple of characters that aren’t Nagi or Asa by the end of the volume, which hints at a darker path to come. I did appreciate the slightly ominous tone that Giant Spider & Me presents, but there are times where the clash between cute and creepy becomes detrimental to the story. It’s such a whiplash to see Nagi petting Asa and then showing dozens of fangs in the spider’s mouth, and to be honest, there were times when I didn’t enjoy it. The introduction of other characters also makes the clash quite apparent, as the story moves at a quick pace during these interactions; you can feel the pacing becoming more uneven.

However, the slice-of-life elements do pull the story together quite nicely, as Nagi and Asa make a wonderful “girl and her pet” duo. Since this is a manga that delves into food for most of its run, you can see some accurate recipes and facts about certain ingredients, and it feels organic when Nagi mentions it during her journeys. As a young girl with no one to talk to most of the time, her monologues or one-way conversations with her spider end up becoming endearing and build her personality as a proficient cook. When the manga goes into this territory, it’s an entertaining read. The artistic detail with these recipes is a highlight, and it inspires me to actually try out these recipes myself. While a survivor of an unspeakable horror, Nagi is still just a precocious child, and the slice-of-life applications of cooking and exploring make for a relaxing read when it isn’t hinting at a more serious story.

Regarding the overall art, the human character designs aren’t too remarkable, but Asa’s artwork is quite detailed. In one of the extra pages near the end of the volume, the author stated that she was aiming for a cute but unsettling look for Asa, and I think Giant Spider & Me nails it quite well. I want to simultaneously hug and run away from the thing, but I also feel sympathy for it. Asa might be bumbling and brash at times, but it’s loyal and protective, as witnessed in a picnic where it scared off a menacing wolf. Asa’s like a loving dog (or the manga equivalent to Trico from The Last Guardian). As mentioned earlier, I’m not too enthused with the human designs, but they could improve in later volumes.

While an uneven blend of cataclysmic suspense and slice-of-life adventures, Giant Spider & Me: A Post-Apocalyptic Tale Volume 1 captures the chemistry of a girl and her unusual companion. I can’t wait to see what else this manga cooks up in the future.

Elisha Deogracias is an aspiring accountant by day, freelance writer by night. Before writing for Gaming Trend, he had a small gig on the now defunct Examiner. When not being a third wheel with his best friends on dates or yearning for some closure on Pushing Daisies, he's busy catching up on shonen manga and wacky rhythm games. Mains R.O.B. in Smash. Still doesn't know if he's a kid or a squid.
Related Articles: Beyond the Page, Giant Spider & Me: A Post-Apocalyptic Tale Volume 1
Share
Tweet
Share
Submit