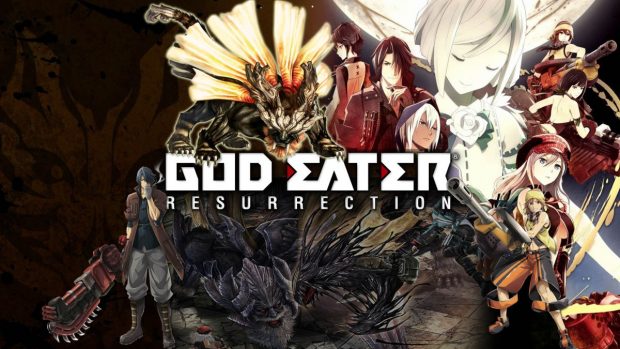 God Eater Resurrection begins by getting you hyped. The moment you launch the game, an anime opening video flashes from moment to moment, showcasing the characters and world of God Eater. God Eater Resurrection, marries its unique style with gameplay that makes you feel like you’re playing an anime. Gameplay is king, and God Eater Resurrection acknowledges this with fun gameplay. However, repetitive aspects of the game and a lackluster story hampers this game from reaching its full potential.

Having never played a God Eater game before, I had no set expectations going into the game. With God Eater’s second foray into the western market, this is the most complete God Eater experience available. The added content that bridges the gap between God Eater and the upcoming God Eater 2 will intrigue newcomers to the franchise, and hopefully give reasons for long time fans to pick up this version of God Eater.

In God Eater Resurrection, you play as a customizable protagonist who is recruited to become a God Eater. The titular soldiers are tasked with defeating monsters known as Aragami (violent gods) who have ravished the world. At the introduction of the story, the world is almost destroyed in a dystopian future. Where humanity has lost hope, you are identified as one of the new-type God Eaters, who can change their God Arc weapons into both a melee and ranged weapon at will. As a new-type, you are put into a squad of God Eaters who have a range of personalities; from the lone wolf Soma to the happy-go-lucky Kota. There is a wide breadth of characters, each being likable in their own respect.

Fire back! One of the many perks of the Burst mode.

The story is delivered through the use of in-game cutscenes that are played in-between missions, giving the player a glimpse at humanity’s struggles. This dark theme does not resonate well during emotional scenes. The voice-acting is decent, but ultimately falls flat throughout the game. It is by no means meant to make you cry, but it does not have much emotional resonance, making you not care about the story and instead, itching to go back onto the battlefield.

God Eater Resurrection’s gameplay is just pure fun. It distinguishes itself from titles such as Monster Hunter through its use of the Burst mode system, in which you use your God Arc to devour an Aragami in a way that would make Kirby jealous. Doing so initiates Burst mode, which gives you faster mobility and stat increases. Once you use the God Arc to take an Aragami’s ability, you can then fire the ability back at the Aragami, another perk of the Burst system. Some enemies grant powerful attacks while others give you weaker attacks that almost make it unnecessary to use the Aragami’s attack and instead go in swinging your weapon in Burst mode.

The game wants you to be tactical, but balancing issues like the effectiveness of the Aragami’s attack, makes it difficult to be tactical in your approach which the game emphasizes. Another drawback to God Eater Resurrection’s strategic emphasis is when you are advised to change your loadout before each mission. However, I felt that this soon became unnecessary, as most of the Aragami all had a weakness to the blaze element, making it more effective to take a blaze melee weapon and then switch your bullets’ element accordingly. This took away a major facet of the game, making it seem more like a button mash until your enemy is dead. Despite this, there is a charm to the gameplay that is created through the Burst system. The grind for better gear also gives the game another dimension as it encourages you to gather materials to craft better gear.

The characters look great in their 3D-anime style making me doubt that the characters originated on the PSP. The only indication that this is a remaster comes in the textures of buildings and the ground. This is, however, not detrimental to the experience; the technical downfall of this game is in its lack of monster diversity and level design.

During my time with the game, I had encountered the same three or four mob monsters with an elemental variation of them being introduced later in the game. It seems as though the game wanted me to approach these Aragami differently, but as they are introduced later, the need to exploit their weaknesses diminishes as your character becomes stronger. The lack of monster diversity also extends to the more powerful boss monsters in each mission. In the beginning, you are tasked with fighting the same couple of medium Aragami, with a large Aragami being introduced a bit later on. As you progress, the Aragami seem to all be color-palette swaps with little to no attack variation to distinguish them. This makes God Eater seem repetitive at times, but the easy to digest gameplay makes the experience fun. At least the inclusion of online co-op spices up the repetitive missions, as you can mess around with friends in the quest for better gear.

Ready to get back into the action!

God Eater Resurrection is a fun 40-hour experience that keeps you going with its gameplay mechanics and customization. The dark story falls flat at points, with the gameplay saving this game from a lackluster story. While the lore of the world is interesting, dull voice-acting sucks away the narrative’s emotional points making cutscenes a chore to watch. Gameplay is the only reason for you to pick up God Eater Resurrection, as the story is unconvincing and fails to provide a compelling hook for you to keep going.

God Eater Resurrection is a fun 40-hour experience that keeps you going with its gameplay mechanics and customization. The dark story falls flat at points, with the gameplay saving this game from a lackluster story. While the lore of the world is interesting, dull voice-acting sucks away the narrative’s emotional points making cutscenes a chore to watch. Gameplay is the only reason for you to pick up God Eater Resurrection, as the story is unconvincing and fails to provide a compelling hook for you to keep going.