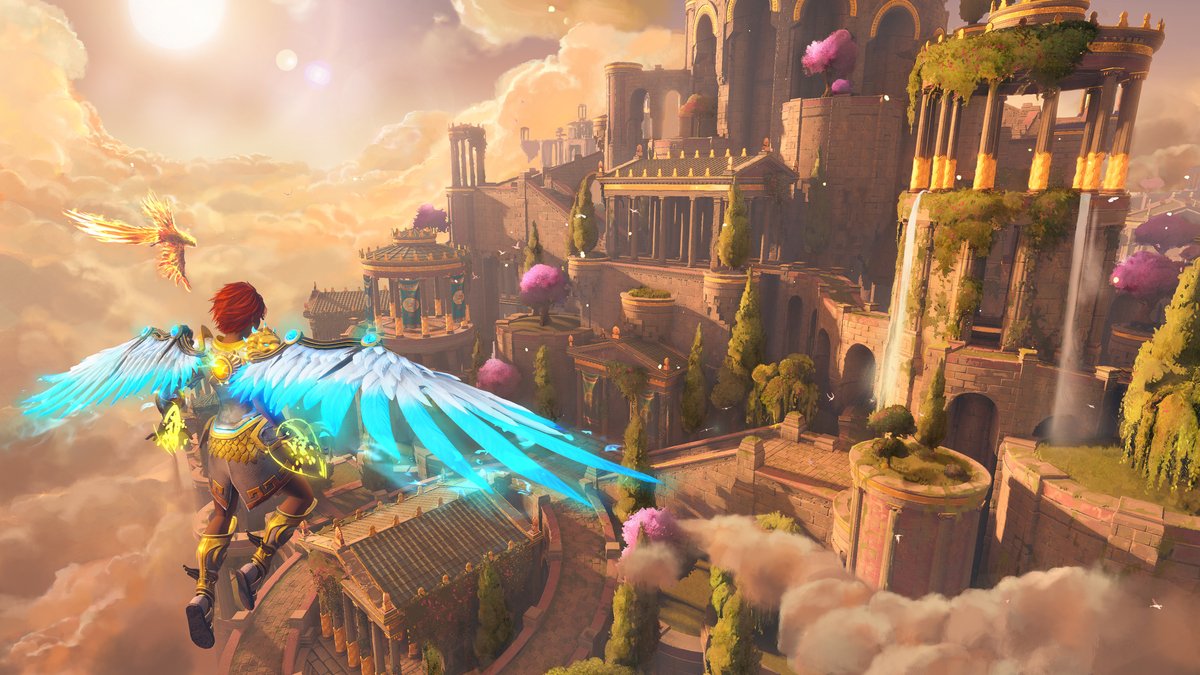 We absolutely loved Immortals Fenyx Rising (our review), so obviously we are excited for the roadmap of DLC ahead. The first of three planned expansions is entitled “Immortals Fenix Rising: A New God”, and takes place after the events of the main game. As such, this review will cover those events — if you’ve not yet completed the main game, you might want to unfurl your Wings of Daedalus and zip out of here until you do!

Still here? Great. After Fenyx and her newfound family tackle the final battle with Typhon she discovers that she’s, in fact, a demigod. This means she has access to the Temple of Olympos where she can take her rightful place among the Greek gods. That said, naturally her brethren will want to challenge you before you earn your seat in the inner Pantheon. What does that mean? More puzzles!

Fenyx is already insanely powerful by the end of the main game, but that doesn’t mean there isn’t still room to grow. A New God almost immediately gives Fenyx the opportunity to earn new powers and skills, and in fact the expansion will max out all of your stats. I mean, you are a demigod after all. New equipment with perks like an extra flap of the Wings of Daedalus are a must-have for some puzzles, but being able to use Athena’s dash to punch through those red force fields is even better.

You’ll be seeing some familiar faces on Mt. Olympus, with the four gods you rescued offering up multiple challenges before offering their blessing and any boons that come with it. As before, these are split between one, two, or three lightning bolt difficulty levels with a mixture of platforming, logic puzzles, block pushing, combat, and more. These four gods give you four new areas of Olympus to unlock and explore, each taking 3-4 hours to complete, but that isn’t all there is to do. I won’t spoil the back half of the expansion, but up front you’ll also be tasked with finding some objects that have “gone missing”. Keep an eye out for gold shafts of light in the sky like you would find in the Vaults of Tartarus and you’ve got some idea of what you’ll be facing here. These are often further links into Greek mythology with examples like Ariadne’s string that might be a good nod, but maybe not worthy of a full adventure.

The team really had to lean into new skills in the main game, adding so many puzzle-based elements, but they’ve clearly hit their stride here. Some new mechanics like magnetized metal balls, needing to chain electrified boxes together, and more use of skill combinations are a real highlight. This expansion is set directly after the ~35 hours of main story content, and you’ll need all 35 hours of skills to succeed here. Each of the four gods offers up six trials, but they won’t let you “cheat” by using your potions — and yes, that includes health. Bring your A game — this expansion is endgame content.

Whether or not A New God is worth the price of admission is directly tied to how much you enjoyed the Vaults of Tartarus in the main game. If wandering around and beating up random mobs was your jam, but you avoided the optional vaults, this may not be for you as it’s almost entirely vault-based. If, like me, you thought the vaults were the shining highlight of Immortals: Fenyx Rising, then you should grab this immediately.

All of this positivity doesn’t come without a few rough edges, it seems. I have run into a hard lock, a puzzle that I had to die twice to reset, mouths that stop working during cutscenes, and the occasional odd physics spaz-out that broke the wooden box I was holding. None of it is in any way a showstopper, but it does break immersion a bit. I’m certain all of this can be patched in short order, based on how fast the team ironed out any remaining hiccups with the main game.

Immortals: Fenyx Rising: A New God is just the first of three planned DLC. The Season Pass that is available for the game will feature three paid expansions, including a trip to ancient China for a completely new adventure. If the other two DLC installments are anywhere as long or as high-quality as A New God, the team is adding easily another 30+ hours of exciting content to an already amazing game.

With only a few technical hiccups, Immortals Fenyx Rising: A New God represents a dozen hours of vault-based challenges that will put your platforming and logic skills to the test. If you want more Fenyx Rising but harder, then this expansion is a must-have.

Ron Burke is the Editor in Chief for Gaming Trend. Currently living in Fort Worth, Texas, Ron is an old-school gamer who enjoys CRPGs, action/adventure, platformers, music games, and has recently gotten into tabletop gaming. Ron is also a fourth degree black belt, with a Master's rank in Matsumura Seito Shōrin-ryū, Moo Duk Kwan Tang Soo Do, Universal Tang Soo Do Alliance, and International Tang Soo Do Federation. He also holds ranks in several other styles in his search to be a well-rounded fighter. Ron has been married to Gaming Trend Editor, Laura Burke, for 21 years. They have three dogs - Pazuzu (Irish Terrier), Atë, and Calliope (both Australian Kelpie/Pit Bull mixes).
Related Articles: Immortals Fenix Rising: A New God, Let's Play
Share
Tweet
Share
Submit