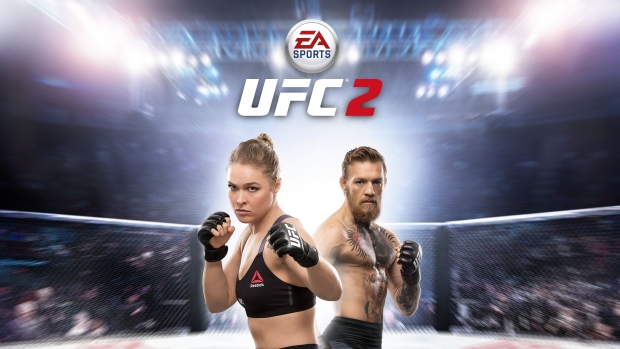 There is a perception that the UFC is human cockfighting — a bloodsport where people rip each other apart for our amusement. In reality, the UFC is is one of the most complex and nuanced sports ever devised. The cover athletes of EA Sports UFC 2, Ronda Rousey and Conor McGregor, know this more than anyone, but as both can likely attest — all the training in the world can’t counter a surprise kick or a well-placed choke. In both cases, they fought with the wrong gameplan and lost. Thankfully, it’s it not all black eyes in UFC 2’s ring.

Looking back two years ago at my review for EA Sports UFC, I called it a “Split Decision,” and with another two years of development under EA Canada’s belt, I was eager to see what this newest installment would bring to the Octagon.

The biggest improvement is also the most obvious, and likely one of the most difficult to capture — visual fidelity. Every fighter in UFC 2 is meticulously recreated on screen, from their signature strikes, to their victory celebrations. Even their oh-so-very awful tattoos are represented exactly as you’d see them during a real broadcast.

As it was in the previous outing, there are still plenty of hilarious physics-based oddities that make your fighter into some sort of pretzel-contortionist, and more than occasionally you’ll slide into the correct position to execute an animation such as a diving punch, throw, or grapple. Before we get to all that, though, let’s talk about the mechanics underneath.

Still one of the most dangerous fighters of today.

When the game opens, you’ll see the full presentation power of UFC 2, showcasing the walkout, the pomp and circumstance preceding a fight, and a few action-packed rounds. With Robbie Lawler down in the cards, his coaches suggest that he needs a knockout to win, handing the controls to you, the player, to make it happen. Serving as a tutorial, the game then walks you through the basic controls, opening up to all options once this fight is in the books.

As was the case last year, the Career mode provides an opportunity to fight your way into The Ultimate Fighter house. Squaring off against other rank amateurs, you cut your way through the fight brackets, eventually culminating with a belt and a chance to square off in the Octagon, proper.

Your fighter’s growth depends heavily on the archetype you pick on creation, as well as training time in the gym. These training montages are minigames, asking you to hit the bag low or high, practice submission attacks, defenses, and clinch techniques, and more. They are broken into easy, medium, and high difficulty, with the score required being higher in each tier, and the higher the resultant bump in attributes. As an improvement, once you’ve set a high score and you are happy with the grade result, you can then simulate it to that same degree instead of repeating it.

To break things up a bit, you’ll have wrenches tossed into the mix, such as gym renovations that somehow prevent you from striking or doing ground work, or worse a closing that gives you two training opportunities instead of the standard three. As in the real world, overtraining can also cause injuries that can hinder you until you’ve finished your next fight. Injuries in the fight can also result in long-term degradation of your fighter, and ultimately retirement. Wins extend that retirement clock as fan popularity grows, but eventually your body condition will catch up with you, forcing you into retirement.

Unlike other EA Sports titles, the career mode in UFC 2 is little more than a pitstop. The bracket system doesn’t feel all that different than early undercard fights you’d tackle. The randomized opponents, the short TUF bracket, and the single animation of Dana giving you your glass bauble for winning the show feels a little underwhelming when compared to what it could be. It’s less like a career and more like a simple Create-A-Fighter interface, leaving me less connected with my pugilist.

CM Punk — accurately named, and likely not sticking around.

One of UFC 2’s bigger features is entitled “Ultimate Team.” Assembling a group of up to five fighters, divided by weight class, you essentially create a fight house. Not unlike the Blackzillians, American Top Team, American Kickboxing Academy, or Tri Star Gym, you’ll cultivate this roster of fighters but not the way you might think.

Using in-game currency, or cold hard cash, you’ll be able to purchase card packs. These packs give perks, attribute boosts, additional training opportunities, and other options ranked from basic to master. Some are permanent, and some are one-time use such as the cards that add new techniques to your fighter’s arsenal. I was very much reminded of the supply system in Mass Effect 3, though this system allows you to take these fighters back into the single and multiplayer experience.

I was sad to see that there is no mechanism to shed your unwanted cards. I was disappointed there wasn’t a system that allowed you to gamble, trade, or sell any cards you didn’t need. That could be because of the real-money connection, but it feels a bit incomplete without it.

Still the most dangerous boxer ever to tackle the sweet science of boxing.

EA Sports UFC 2 brings a whole host of improvements beyond the visuals. A new Knockout Physics System replaces the canned animations we saw in the previous game. Striking feels better with less flash knockouts, and with better reactions around stuns. Submissions were re-tooled to be more realistic, with a few requiring fewer stages to complete. Unlike the first title, you can create a female fighter for the career system. There are less framerate hitches (though they still exist, thankfully outside of the ring), and the overall graphical fidelity is a step higher this time around. It all feels very polished…with one big exception.

During both career mode and squaring off with the big names in the versus mode against the AI, it never feels like the computer is playing by the same rules. My wife was watching me as I tried to submit a fighter and casually asked “Why is your endurance going down and theirs isn’t? It’s exhausting defending against a submission in real life.” I started watching this for myself and noticed that the AI seemed able to recover from stuns faster, spending less endurance striking or defending, and generally took less damage than I did from the same strikes. It’s here that I realized once again that EA Sports UFC 2, just like its predecessor, isn’t trying to be a 1:1 representation of the real-world sport. There is still no stoppage due to leg strikes, and despite commentary (which is admittedly better this time around) stating that they might stop the fight due to damage or blood, the refs never do. In the end, it’s knockouts or submissions, and that’s it.

If you’ve been watching recent UFC PPV fights, you know there is a mode where players can “Finish the Fight”, as Goldberg has repeated this quote ad nauseum. This Knockout mode is little odd when compared to the sweet science of the UFC, eschewing all ground game for standing-only slugfests that count down until one fighter loses all ten ‘hitpoints,’ falling unconcious. It feels a bit like an arcade game, but had an odd side effect — it serves as a really nice tutorial on the new blocking system. When you can only take ten shots to the head or body, you tend to figure out how to prevent somebody from tagging you. It’s a neat risk by EA Canada, though I’m not sure how well received it’ll be.

UPDATE: I’ve been informed that stoppages due to leg strikes are in the game.  Adjusting the difficulty down to Easy and turning off Adaptive AI, I was still unable to replicate this, but several readers have confirmed it.

Like its younger brother, UFC 2 looks to simulate the most complex contact sport on the planet, and in some ways does so with perfect accuracy. The new animation and knockout system looks better than ever, and the career improvements are a welcome sight, but the barebones career mode, consistent bugs, and ever-present AI cheating are a pretty nasty cut that, if unchecked, may stop fans from wanting a round 3 with EA Sports UFC.

Ron Burke is the Editor in Chief for Gaming Trend. Currently living in Fort Worth, Texas, Ron is an old-school gamer who enjoys CRPGs, action/adventure, platformers, music games, and has recently gotten into tabletop gaming. Ron is also a fourth degree black belt, with a Master's rank in Matsumura Seito Shōrin-ryū, Moo Duk Kwan Tang Soo Do, Universal Tang Soo Do Alliance, and International Tang Soo Do Federation. He also holds ranks in several other styles in his search to be a well-rounded fighter. Ron has been married to Gaming Trend Editor, Laura Burke, for 21 years. They have three dogs - Pazuzu (Irish Terrier), Atë, and Calliope (both Australian Kelpie/Pit Bull mixes).
Related Articles: EA Sports UFC 2
Share
Tweet
Share
Submit