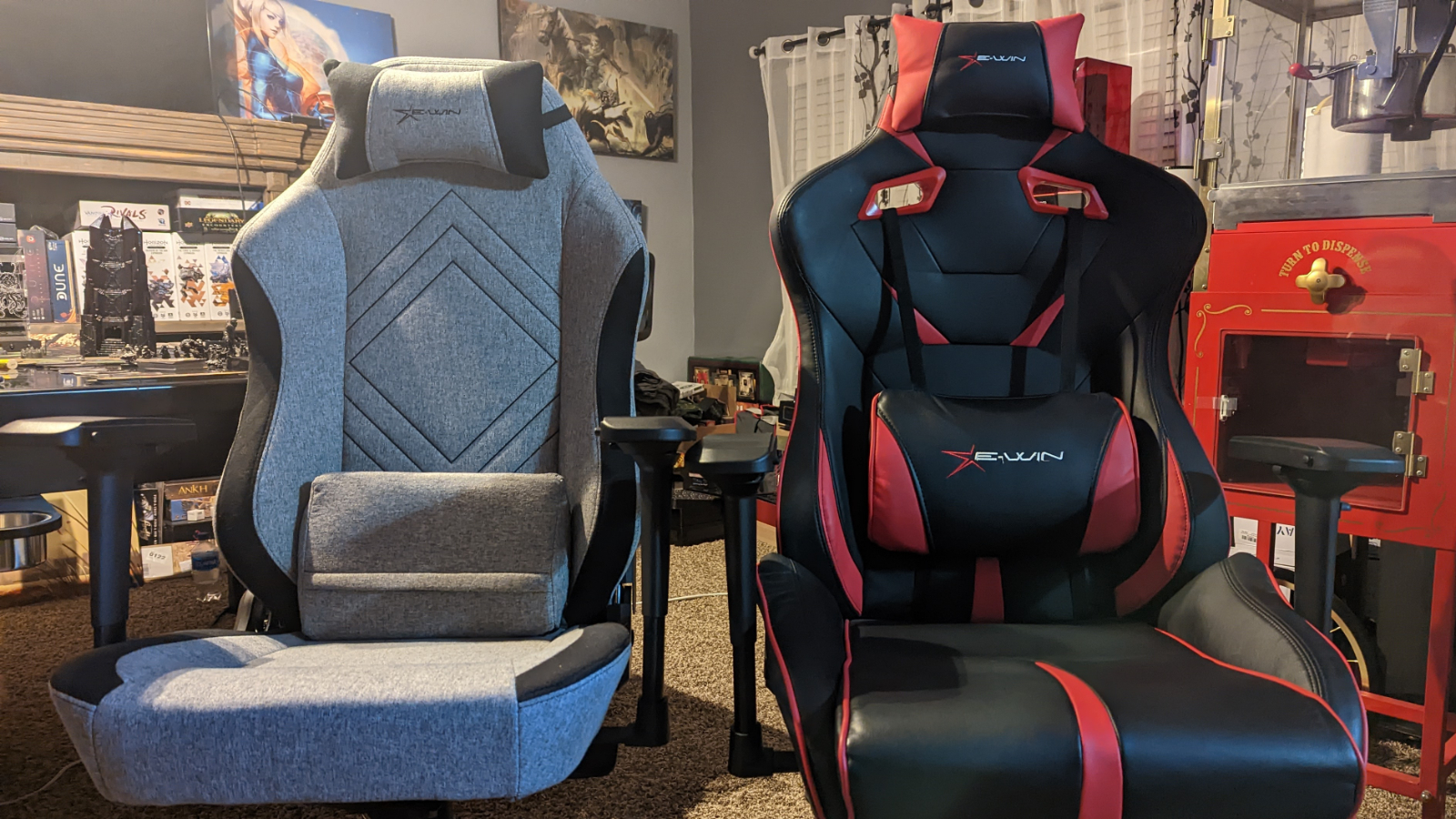 We’ve reviewed a lot of gaming chairs. Each one carries a whole host of features that combine to give it a distinctive look that blends in with the RGB-infused PCs they often flank. E-WIN even sells a series of RGB-laced desks to go along with them. In short, they don’t exactly blend in, unless they are going in a game space. So what do you do when you want something that delivers many of those same features, but with looks that can blend into a living room space, or a more neutral office? Well, we’ve gotten our hands on a new offshoot of E-WIN’s Championship Series of chairs that looks to do precisely that.

There are eight variants of the E-WIN Championship chair series, including a bright pink bunny chair. Beyond the usual polyurethane-wrapped seats and the aforementioned bright pink one lies one that stands out – a soft gray cloth-wrapped chair. Having looked at the Flash XL series as well as a few of the Championship chairs, I wanted to see what the E-WIN team could do with something entirely new. This fresh take on their award-winning chairs is instead covered in a SoftWeave Fabric made from a 350 GSM short-yarn covering their usual ultra-comfortable cold-cure foam. It seemed like a great opportunity to see if the E-WIN team could do the impossible – be subtle.

Ok, it’s a bit unfair to say that E-WIN can’t be subtle – in fact, the company got its start as an OEM chair manufacturer. They know how to make good furniture, and only in 2016 did they start working in the gaming market as well. Each iteration in the space has improved on the last, but now we have an opportunity to return to their roots with something more traditional.

Starting with the most obvious difference, the cloth on this Championship Series chair is comfortable. Their patented SoftWeave fabric is made of a short and dense yarn that feels soft and breathable. All of us are suffering through a rather rough heat wave, and having something that breathes is essential when you’re sitting in the same space for eight hours in a row.

The cold-cure foam that lies underneath the surface is the same that we saw in the Flash series we reviewed last year, though not as overstuffed. In fact, this chair falls in between the Flash and the Flash XL in terms of the foam density – a good mix that’ll blend into an office space without evoking that “gaming” feel. Sticking with the advancements from last year’s chair, they’ve stuck with an edge-to-edge foam approach, meaning there is no hard bar that runs against your legs – something we’ve unfortunately seen in other “non-gaming” chairs for support.

The good news is that it’ll be comfortable for any body type, large or small. Where our blue chair has a solid bar that rings the entire seat, the Flash XL is soft all the way to the edges. The structure of the chair lies in the core, not the edges, so it’s great to not have a hard bar running against your leg when you turn a bit in your seat to get comfortable.

Closer inspection of the cloth reveals the double stitching. Rather than using a single heavy stitch for the seams, this Championship Series chair has a pair of double stitching on each side of that thick seam to provide a great deal of reinforcement. This is very similar to my Judo uniform which holds up to years of abuse without tearing or separating, so I expect the same sort of results here, meaning it should hold up well past the warranty. 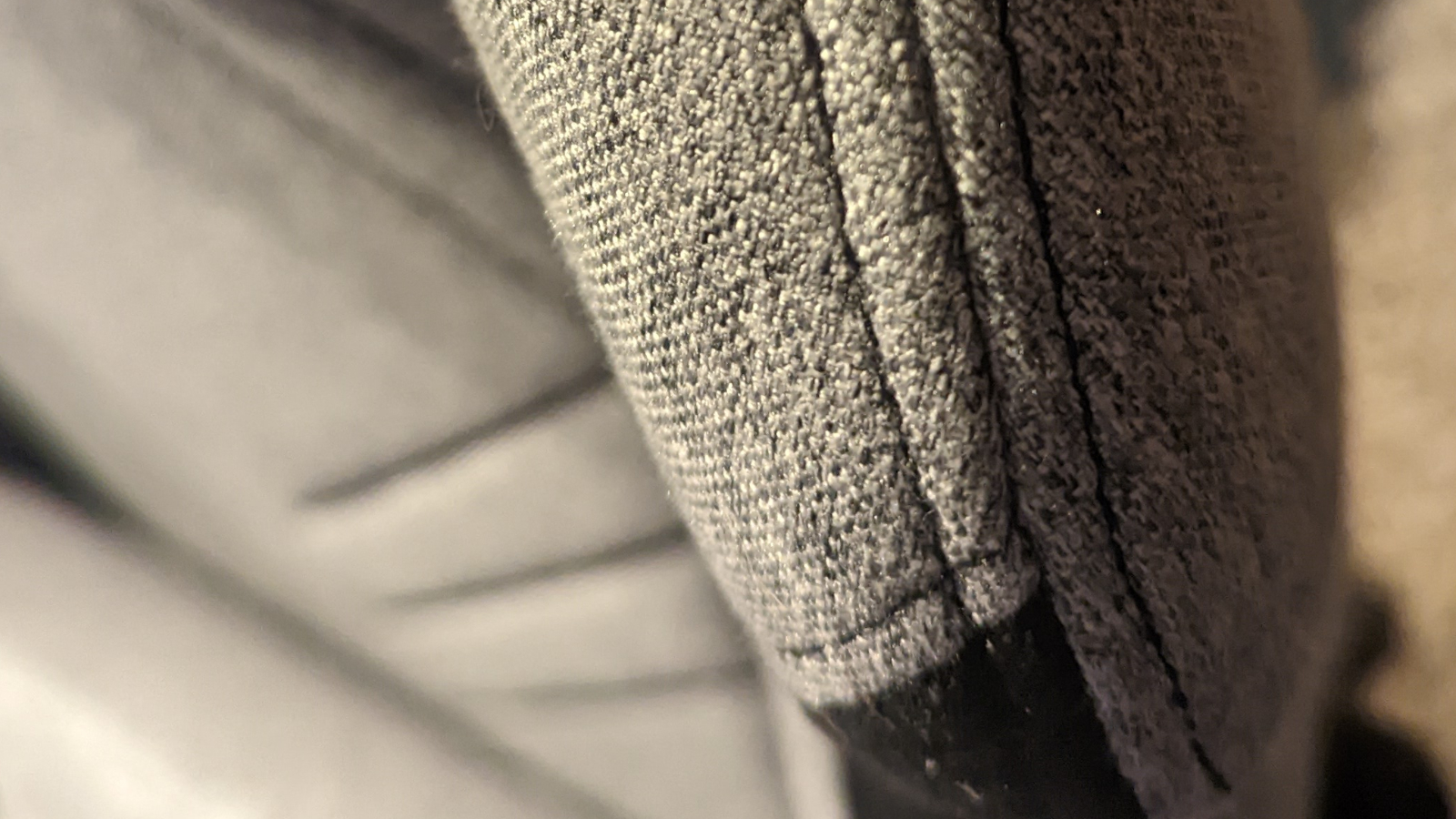 The heavy double stitch is sturdy and should hold up well.

I did find one thing missing from this chair that I’m finding to be a common feature of other chairs nowadays – an install bracket. A simple u-collar bend on one side of the control arms for the backrest, this bracket makes it easier to install the rear of the chair by ensuring at least one side is lined up as it drops into a sort of “slot” on this bracket. This is sadly absent here, meaning you’ll have to line it up on your own. It’s a minor thing, but it’s notable when it’s absent.

There is one thing to keep in mind when picking a chair – your height and weight make a huge difference in the comfort of the chair. I’m 5’10” – average height for an American, but somehow this chair feels short. The Flash XL I use places the headrest pillow right at the back of my head, but this chair’s back is slightly shorter. A quick look at the website says this chair is for people who stand 5’3” all the way up to 6’5”, but I don’t see it being comfortable for anyone above my height. Even with the optional head pillow as high as it’ll go, it places it directly behind my neck. Now, if that’s where you prefer support, then you are all set, but it is something to consider.

Speaking of supports, the chair does include a back support pillow, though they’ve moved away from the attached straps. Frankly no loss there as I’ve always left the pillow sitting flush against the chair. If you need that support higher, you’re a bit out of luck.

I was disappointed with the 4D armrests on this chair. The Flash series felt like they glided better than this Championship chair, and I could hear the plastic-on-plastic sliding. I wonder how well that’s going to work long term, and I’m starting to see switch-released 4D mechanisms with metal parts appearing in this price range. It might be time for E-WIN to re-evaluate this particular component in their build.

Heading underneath the chair I saw a great deal of improvements carried over from previous efforts. The entire frame is reinforced where it matters and locked in place with four bolts anywhere a connection is made. Lock washers keep everything in place, and a handful of spares are included with the chair should that change down the line. This bag of extras is nice to have as a trip to the hardware store might not yield you the correct bolt – I speak from experience on that one. 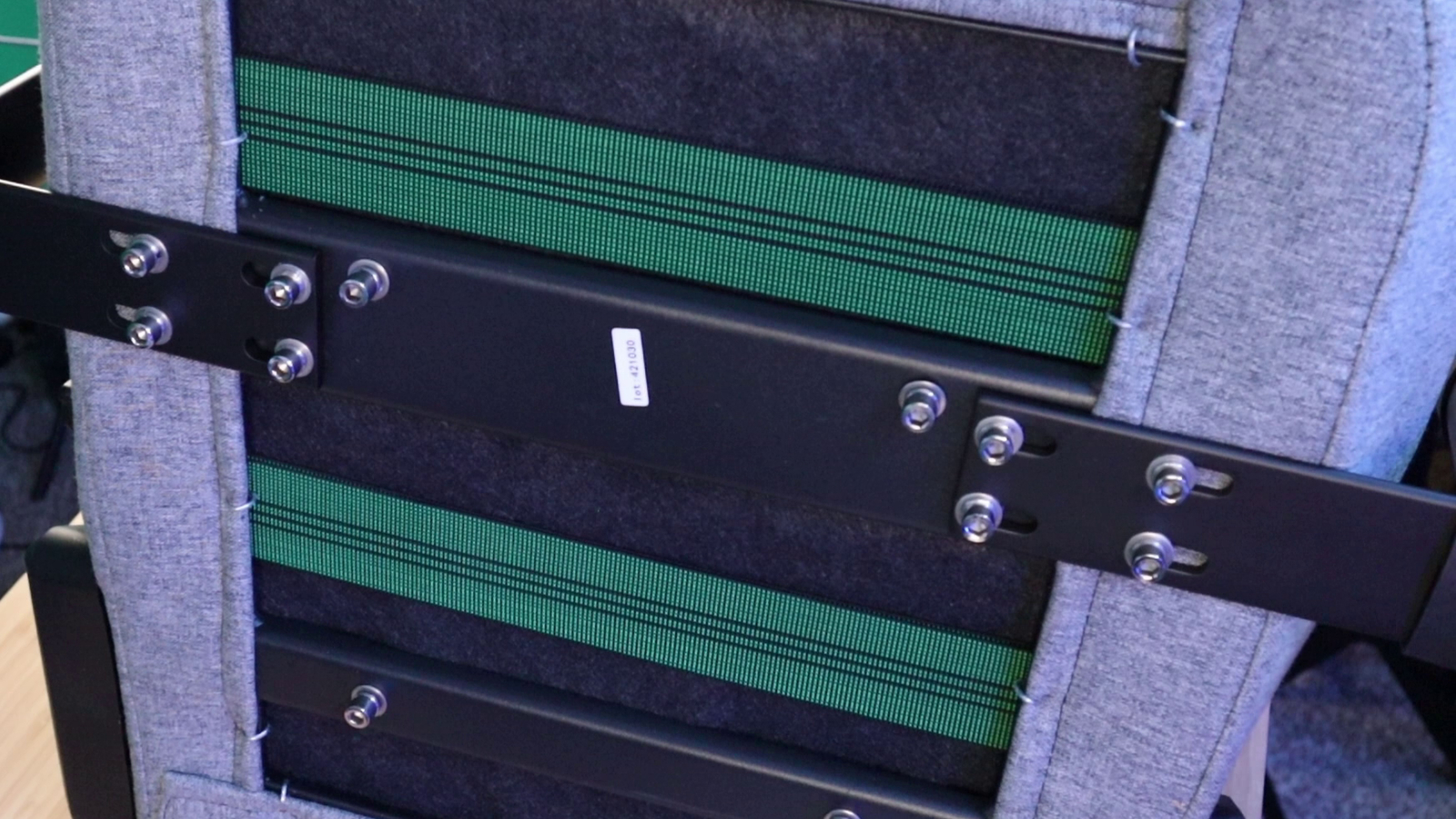 As I’ve assembled dozens of chairs in the last few months, I’m starting to see that the tilt mechanism is evenly distributed into just two varieties, with some rare exceptions. The smaller chairs most often use a smaller tilt mechanism to keep their chairs lightweight, and that’s what we see here. Thankfully, this mechanism is still heavy duty enough to support up to 400 pounds of weight, so the extra weight of a heavier mechanism doesn’t seem necessary.

I’ve taken every chair I’ve reviewed to task for their casters, and I have to give credit to E-WIN for trying something new. This new type of wheel is dubbed “E-WIN PRIME” and is hub-less, meaning it doesn’t have a center part. The simple plastic rolling wheels have been replaced with ball bearings, meaning they glide beautifully across the floor. I was skeptical that they wouldn’t still suck up carpet, but to my surprise, even after weeks of use, they are holding up beautifully. For once, we have a wheel that not only manages to work well, but looks good doing it! It’s great when a manufacturer listens to your feedback, but it’s better when they manage to deliver something that addresses your problem. Bravo, E-WIN! 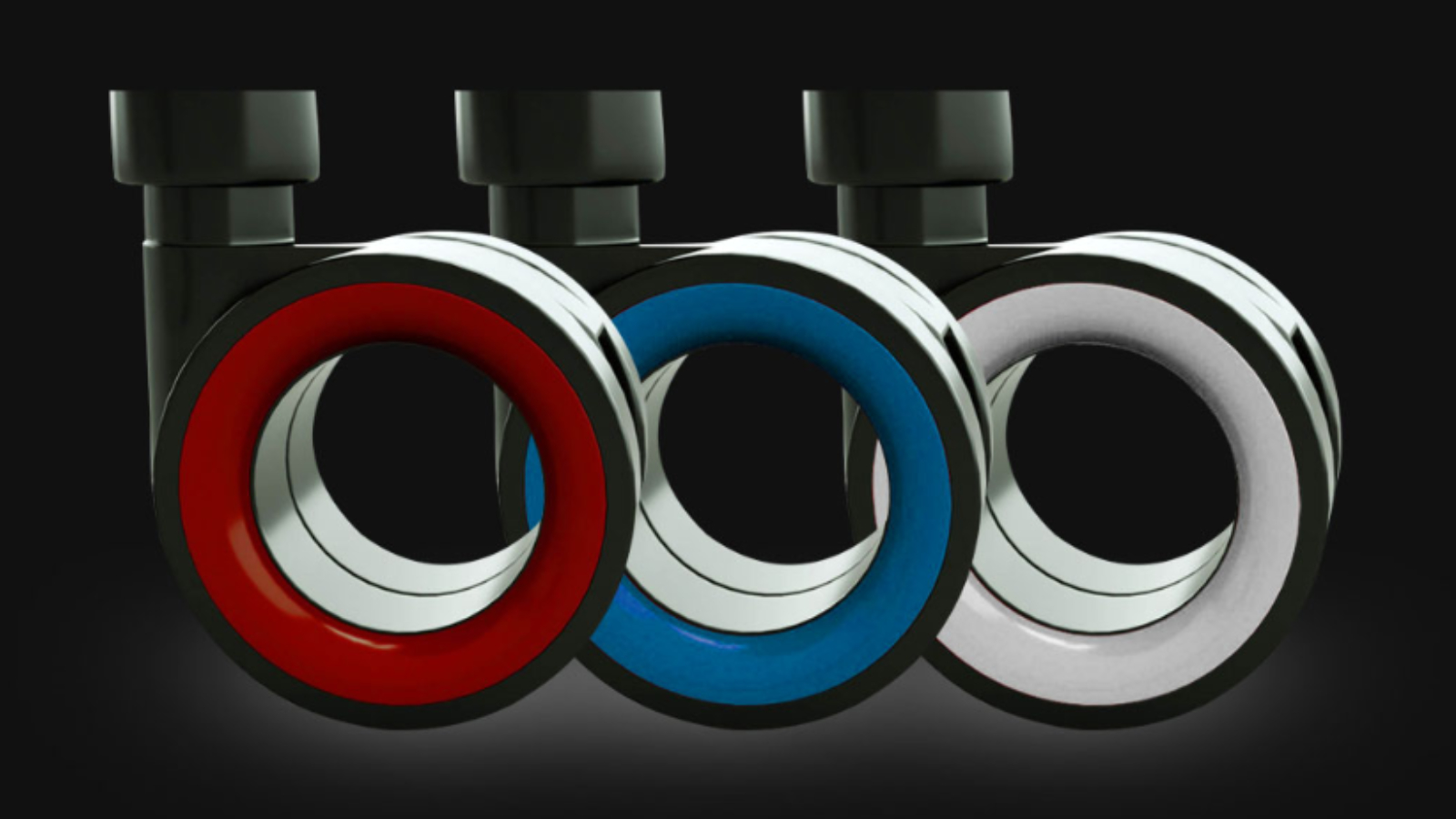 Much like the Flash XL, the Championship Series of chairs is covered by a two year warranty. You can extend that to three years for free simply by taking a picture of the gaming chair and sharing it on social media with some specific tags. If you instead take a video of the chair and share it with the E-WIN team, they’ll happily extend that out to five. That’s outstanding, especially when so many chairs on Amazon have the ominous “contact seller directly” message instead of a listed warranty. It’s nice to see the E-WIN team stand behind their products, especially with a warranty that’s easily double that of their competitors, if not more.

Ultimately the Championship Series is a chair that delivers much of what we see on higher priced chairs, but in a package that can easily blend in with your existing decor. Not quite as padded as its larger counterparts, but also not nearly as heavy, this chair retails at $479, though I’m seeing it on sale for $359 at the time of writing, and sales have seen it dip to as low as $299, so a little patience and timing can net you a pretty great deal.

A comfortable chair that delivers nearly every feature of its larger counterparts, but does so in a form factor that doesn’t “look like a gamer chair”. Just make sure it’s appropriately sized for your body type.

Ron Burke is the Editor in Chief for Gaming Trend. Currently living in Fort Worth, Texas, Ron is an old-school gamer who enjoys CRPGs, action/adventure, platformers, music games, and has recently gotten into tabletop gaming. Ron is also a fourth degree black belt, with a Master's rank in Matsumura Seito Shōrin-ryū, Moo Duk Kwan Tang Soo Do, Universal Tang Soo Do Alliance, and International Tang Soo Do Federation. He also holds ranks in several other styles in his search to be a well-rounded fighter. Ron has been married to Gaming Trend Editor, Laura Burke, for 21 years. They have three dogs - Pazuzu (Irish Terrier), Atë, and Calliope (both Australian Kelpie/Pit Bull mixes).
Related Articles: E-WIN Championship Series chair, Hardware
Share
Tweet
Share
Submit