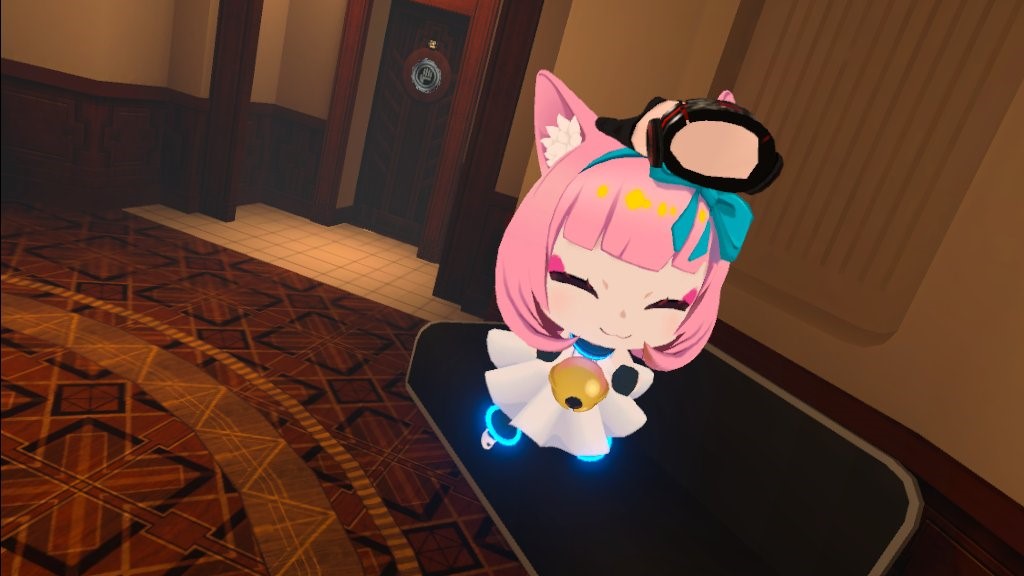 The city of Astrum Close has never experienced crime of any kind – until the founder is suddenly murdered. Professor Albert Rumford was discovered dead at 9 AM, but his body is now nowhere to be found. As the Bureau’s newest Supervisor, Hal Scion and his assistant Lily are tasked with finding the body and solving the murder before the dream of the populace becomes a nightmare.

Dyschronia: Chronos Alternate is an episodic adventure game in VR – imagine Ace Attorney or Danganronpa but with a few escape room type segments. You play as Hal Scion, the most protagonist name that ever protagonist’d, trying to solve the murder of your surrogate father and founder of the city. Most everyone in the city lives their lives in what’s called Augmented Dreaming, or AD. AD essentially allows people to share their dreams with each other allowing everyone to experience pleasant dreams 24/7. Of course, if someone becomes unhappy their dream could infect others and spread like a virus, which is where the Bureau comes in to counsel people. On top of that, there are certain types of people, called variants, who have super powers but they’re under strict surveillance. As a variant who can witness the past by touching certain objects, Hal and his adopted siblings underwent experiments which caused Hal to lose all memory. Oh, also the world is going to end in seven days time. The game’s story and world has a lot going on, but that’s the basic premise.

Episode 1 encompasses Hal’s first three days of investigation, with Hal repeating some days thanks to a mysterious new power when he gets himself killed. It is 100% linear, so sadly you won’t be using said time travel to solve puzzles. Most of the game is closer to a visual novel in fact, with you going to wherever the story dictates in the surprisingly large city. With the amount of walking you’ll be doing, the game thankfully has options for either normal locomotion or point and teleport movement. The latter can be fairly janky, but it helps a lot with VR sickness, which you will still experience despite the game’s anime art style.

It’s very cool to see this kind of world and characters in immersive VR, but the game does push the Quest 2’s hardware a bit too far with some stuttering. Simply quitting and restarting the game will fix this, but having it happen at all instantly escorted me to vom town which is why this review took so long. Dyschronia is also intended to be a seated experience, but I only know that because trying to play the game standing will have you tower over everyone and everything. 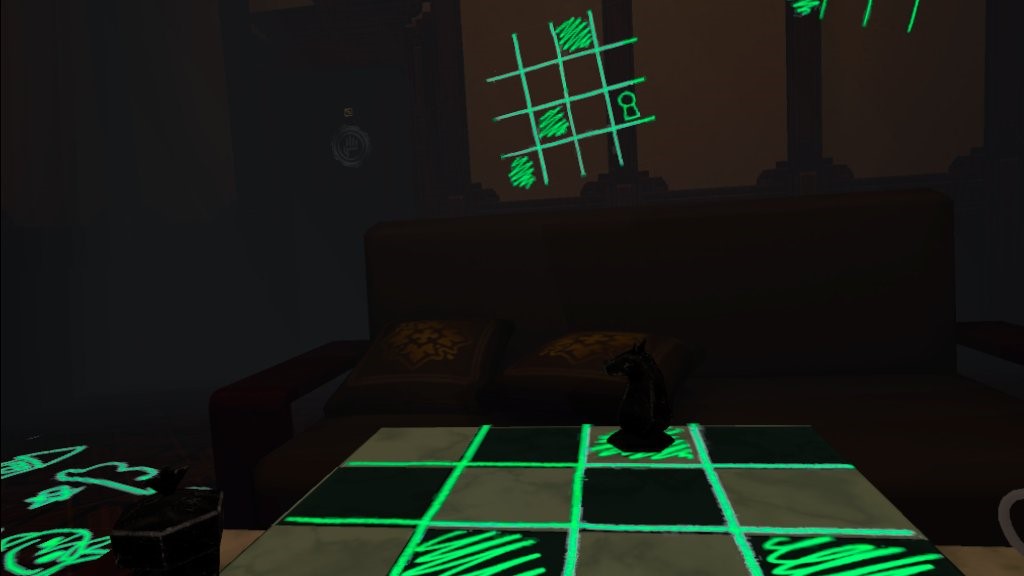 You will spend most of the game listening to people talk, and sadly the voice acting and writing isn’t great. It’s clear the translation is very direct, which means things sound unnatural in English and can get a bit confusing. The voice actors have nice voices, but they’re either very inexperienced or being directed to sound like the original Japanese. I also encountered a few lines that lacked voice over or stopped in the middle in what are otherwise fully voiced conversations.

Despite those issues, I found myself engrossed in all of the mysteries and finding out how they all connected. While the game is lacking in execution, it excels in the premise and is enough to make me excited for Episode 2 and beyond. It also helps that, while there are only a few puzzles, they’re some of the most interesting I’ve experienced in VR. In particular, the trial sequence at the end where you need to physically recreate the criminal’s movements based on your own theory of what happened is a ton of fun and even lets you get stuff wrong. 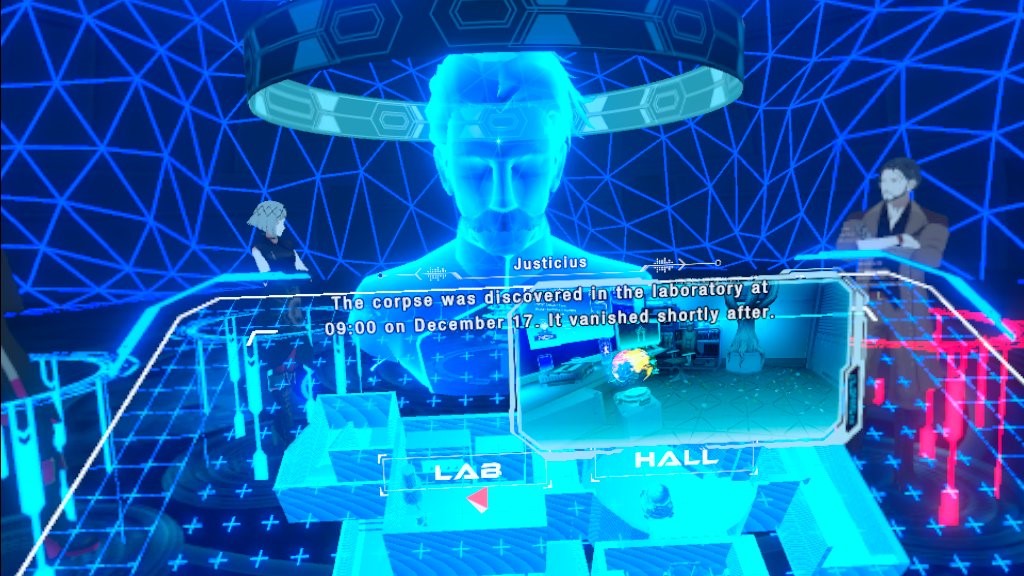 If I had one thing that needs to change for future episodes, however, it’s how you interact with certain objects. If you’ve seen any movies or cartoons imagining the distant future, you know how a lot of this game plays. You hold your hand up to doors to move through them, touch virtual buttons with your hands, and so on. It may look cool, but it’s very unintuitive especially how close the UI like the inventory and investigation log need to be to your face to be usable. Talking to NPCs is also a chore, with you having to position yourself just right to hit their button without being too far away that you can’t reach it or too close that you go through it.

Still, I think the game is worth playing for both the intriguing mystery and amazing soundtrack. This game is seriously funky, and is one of those games where I would absolutely listen to the ost outside the game or even buy a CD or vinyl. There’s jazz, rock, blues, but it all sounds cohesive somehow. If you do anything as a result of this review, at least go listen to the soundtrack.

Dyschronia: Chronos Alternate Episode 1 has a lot of rough edges, but is still an engrossing murder mystery with some unique VR elements. The seven hour adventure can be tough to get through thanks to some UX and technical shortcomings, but it’s more than worth it for the exciting finale.

David is the kind of person to wear his heart on his sleeve. He can find positives in anything, like this is a person who loved Star Fox Zero to death. You’ll see him playing all kinds of games: AAAs, Indies, game jam games, games of all genres, and writing about them! Here. On this website. When not writing or playing games, you can find David making music, games, or enjoying a good book. David’s favorite games include NieR: Automata, Mother 3, and Gravity Rush.
Related Articles: Dyschronia: Chronos Alternate Episode 1, Indies
Share
Tweet
Share
Submit