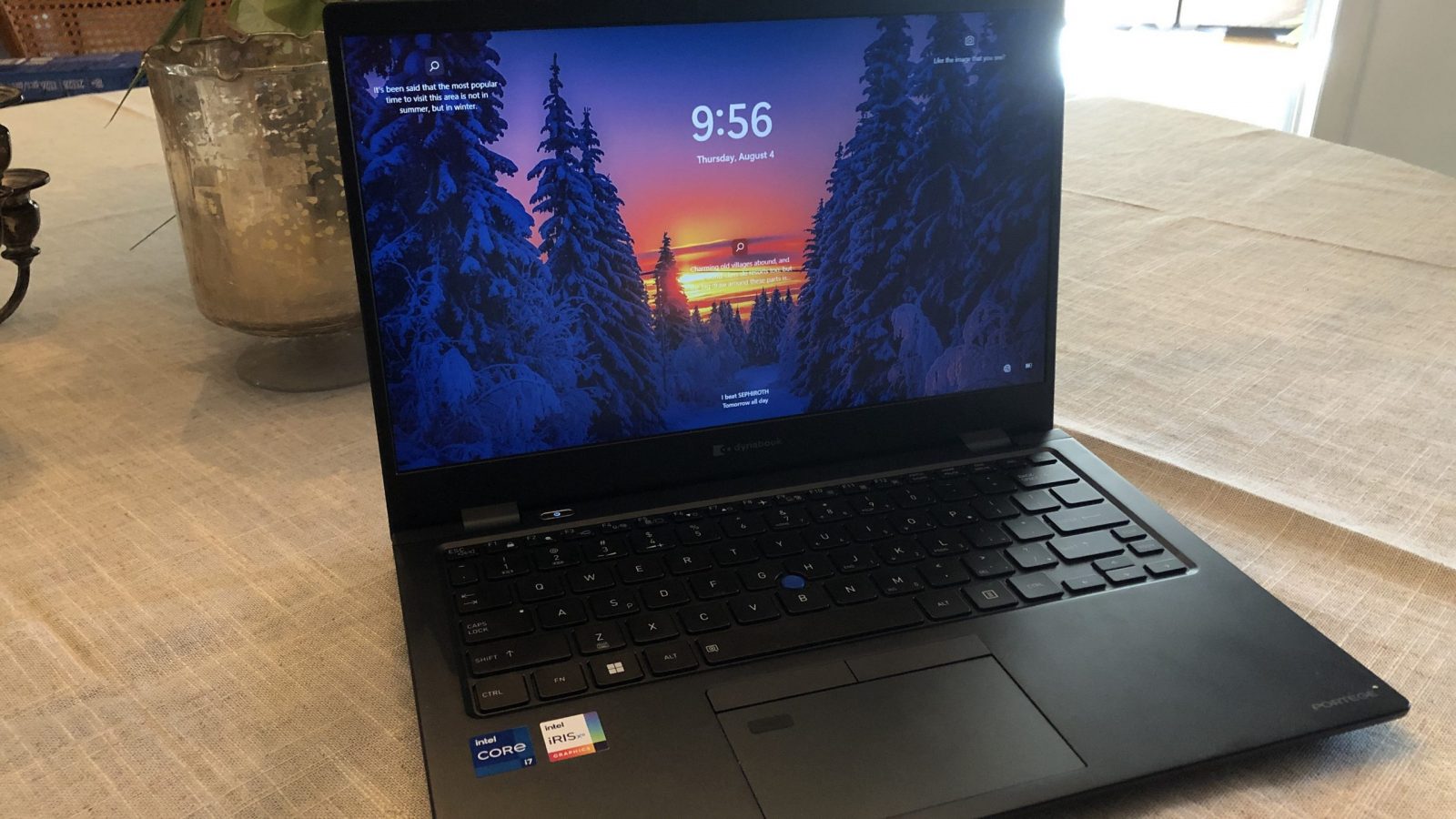 We’re spoiled for choice when it comes to portable computing these days. Do you want to lug around what’s essentially a portable desktop that needs to be plugged in at all times for full power, a lightweight notebook that can only do the basics, or something in the middle? I’ve tried just about everything, from a tiny laptop that could barely run word to a giant gaming beast I used for game development. I prefer the smaller form factor for these kinds of devices and their use cases, but I’m usually just not willing to sacrifice performance too much for that convenience. Enter Dynabook’s new series of Alder Lake-Equipped Laptops – specifically the X30L model – which end up in that sweet spot of incredibly light productivity machines that are still shockingly capable of heftier tasks.

When I say this thing is light, I mean that it barely weighs anything; the charging cable feels heavier. According to the website, it weighs merely 904 grams or just under 2 pounds. You won’t need to carry the charger with you either as a charge will last most of the day provided you’re not running anything too intense. As for other things you may want to tote around, the X30L has myriad ports to insert them including two lightning/USB-C ports (which is also where the charger is plugged in), one HDMI, an AUX port, and a USB port rounding out the left side. On the right is a MicroSD card slot, another USB port which supports Sleep and Charge, a full sized Ethernet port, and finally a full sized cable lock for docking. I really like how these are laid out here as I’ve used far too many laptops that crowd one side with every port imaginable making it difficult to have multiple things plugged in at once. Having both lightning ports on the left could be somewhat cumbersome in specific situations, but I feel it would be easy enough to work around and the cables are so small you can easily have two in no problem. 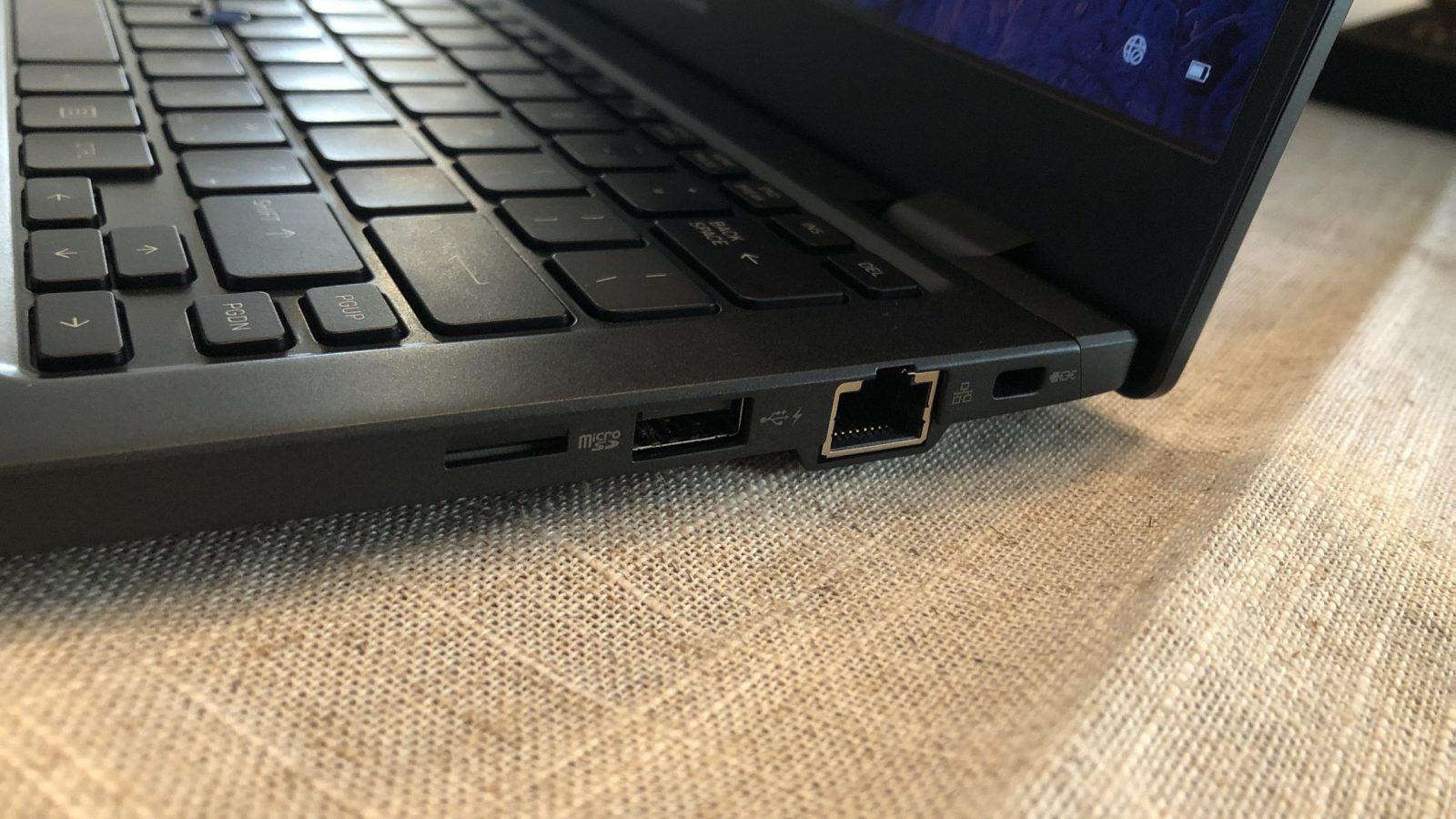 Opening it up you have a compact, chiclet keyboard with one of those mouse nubs between the G, H, and B keys. I have never liked these things and Dynabook did not change my mind, in fact it’s one of the key (pun intended) issues we’ll get to later. Back to the keyboard, I usually prefer fully featured keyboards including a num pad if possible, but this is still very easy to use and type with, even including page up and down keys next to the lesser used right shift. The keyboard has a backlight as well, but I didn’t find it useful as the light only shines around the keys, not through the lettering, and in low light scenarios the screen is enough to let you see even at minimum brightness. You can toggle the backlight along with various other shortcuts by holding FN and pressing Z or, for example, 3 and 4 for volume. Of course this also includes the function keys, with the standard shortcuts like mute, brightness, airplane mode, and more.

Moving on to the trackpad, it’s sensitive enough that a light touch will move the cursor where you want to, but placed in such a way that home row typing won’t accidentally brush against it. The right and left click buttons are placed at the top, but you can also do the same by clicking in the pad on the left or right. At first I thought this was odd, but I quickly began to prefer this layout for having multiple options and the ability to easily click while your hand is on the keyboard. I suppose if you were an evil mouse nub user, they would be very helpful to you too. The trackpad is also where the fingerprint scanner is located, for quickly and easily getting through the Windows lock screen. This is incredibly convenient as someone who just wants to disable lock screens entirely, but the scanner’s placement is frustrating. It’s in the top left corner, which seems out of the way, but I constantly brush over it when moving the mouse, which stops the cursor dead in its tracks. I like the idea and this wouldn’t be a problem if the sensor also functioned as part of the trackpad, but right now it’s just a weird deadzone you have to work around.

Before we get to performance, let’s talk about my arch enemy – the mouse nub. I could tolerate its existence if it didn’t get in the way, but it sadly does in the most annoying way possible. For whatever reason, opening the laptop back up after closing it will sometimes cause the nub to drift slightly for a full minute or two. As you can imagine, this is incredibly frustrating. From what I can tell, this is a software problem and not something wrong with the hardware, so hopefully it can be fixed in the future, but it makes the device a little less convenient than it should be. 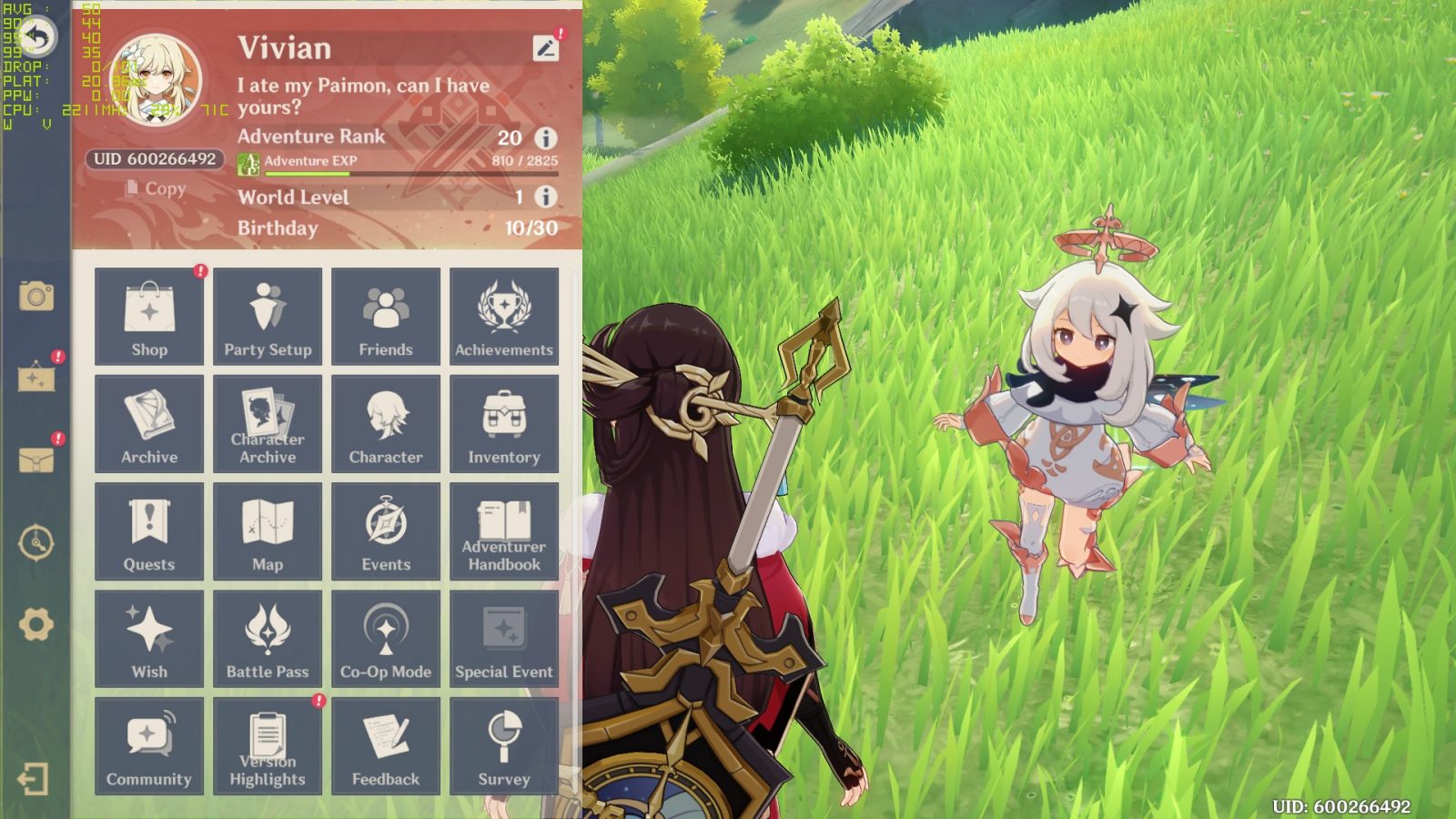 The X30L is designed to be a productivity machine using programs like Word, Excell, Outlook, etc. but this is Gaming Trend and I won’t let intended use cases stop me! This isn’t the beefiest machine out there, but you can get some pretty dang good gaming out of it on less intense titles. You can see our 3DMark results below, but for more anecdotal situations if you don’t quite get that stuff, I was able to get around 45 frames per second on a game like LEGO Star Wars the Skywalker Saga on the highest settings at 1080p, while Genshin Impact managed 40 at medium 1080p. You can easily bump that down or cap it at 30 and have a great time. You won’t be playing the latest and greatest like God of War at only 2 fps, but stuff like Persona 4 Golden, the Stanley Parable Ultra Deluxe, and Sonic Origins run great. Considering the HDMI output and bluetooth for controllers, this would be a great device for party games like Monster Prom, The Yawhg, or the Jackbox party packs. Heck, somehow I was able to run Forza Horizon 5 at a playable framerate, though definitely less than 30 which reminds me of playing Portal 2 and Skyrim on my old Acer Notebook, but of course much better. 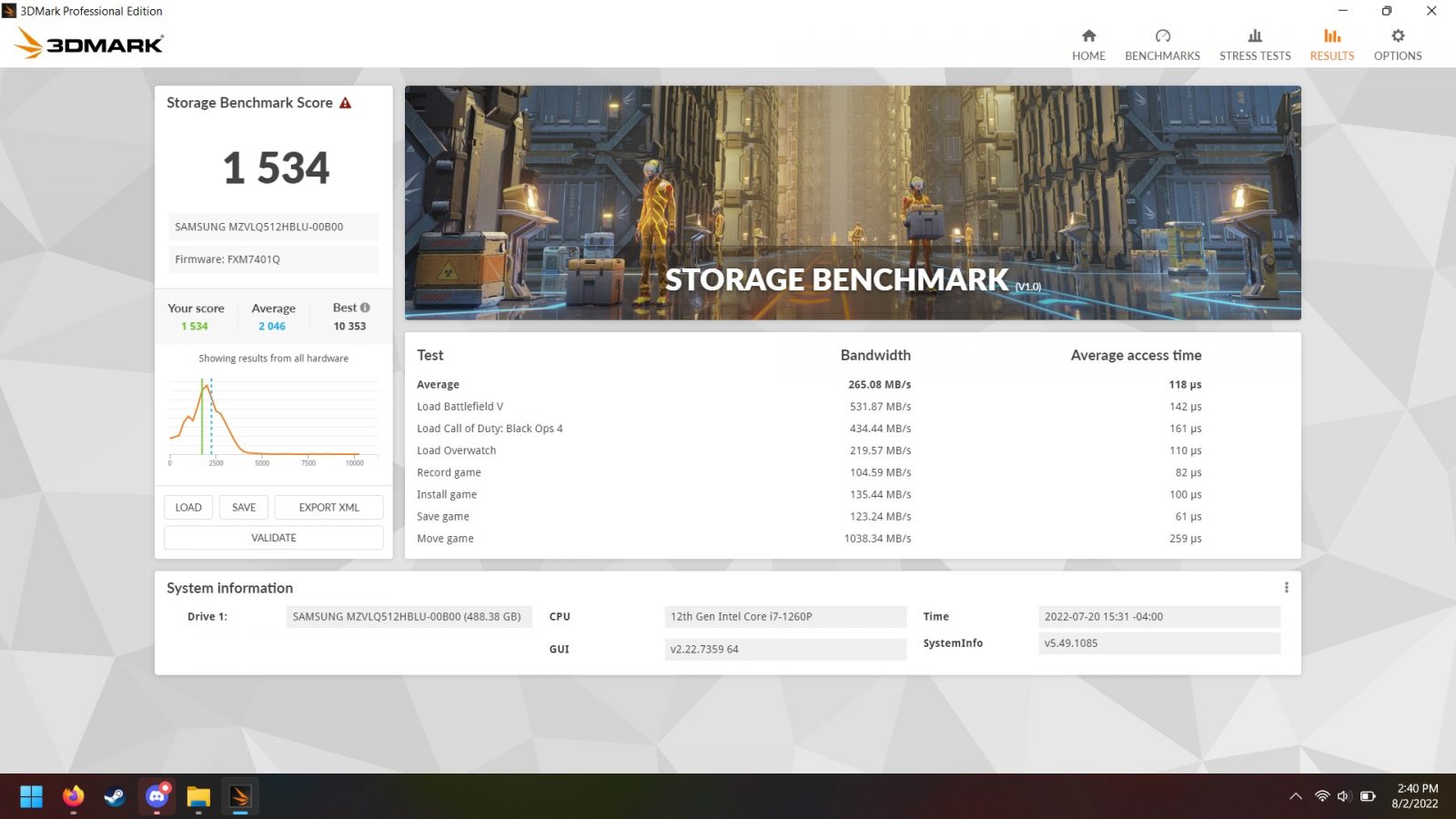 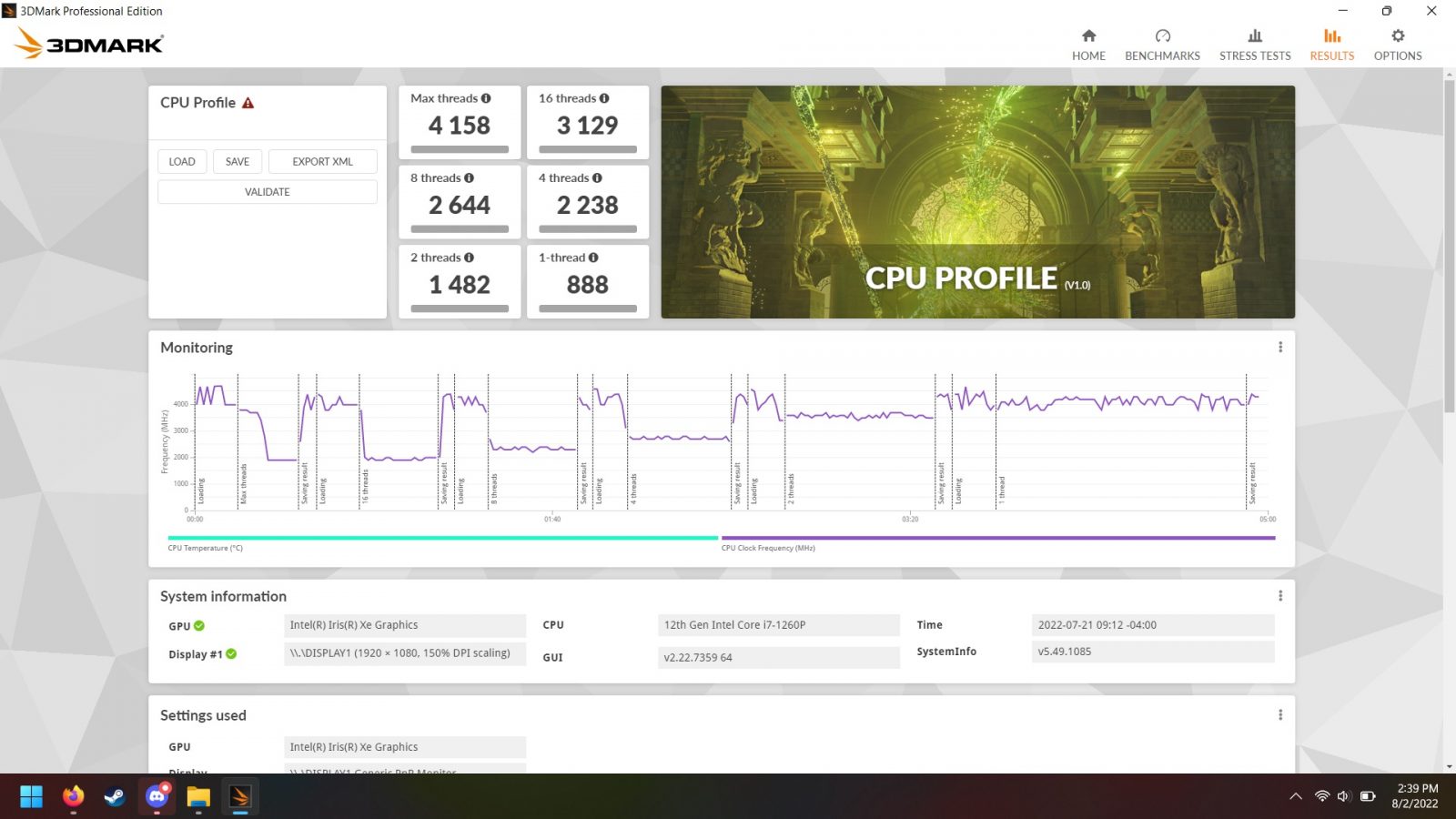 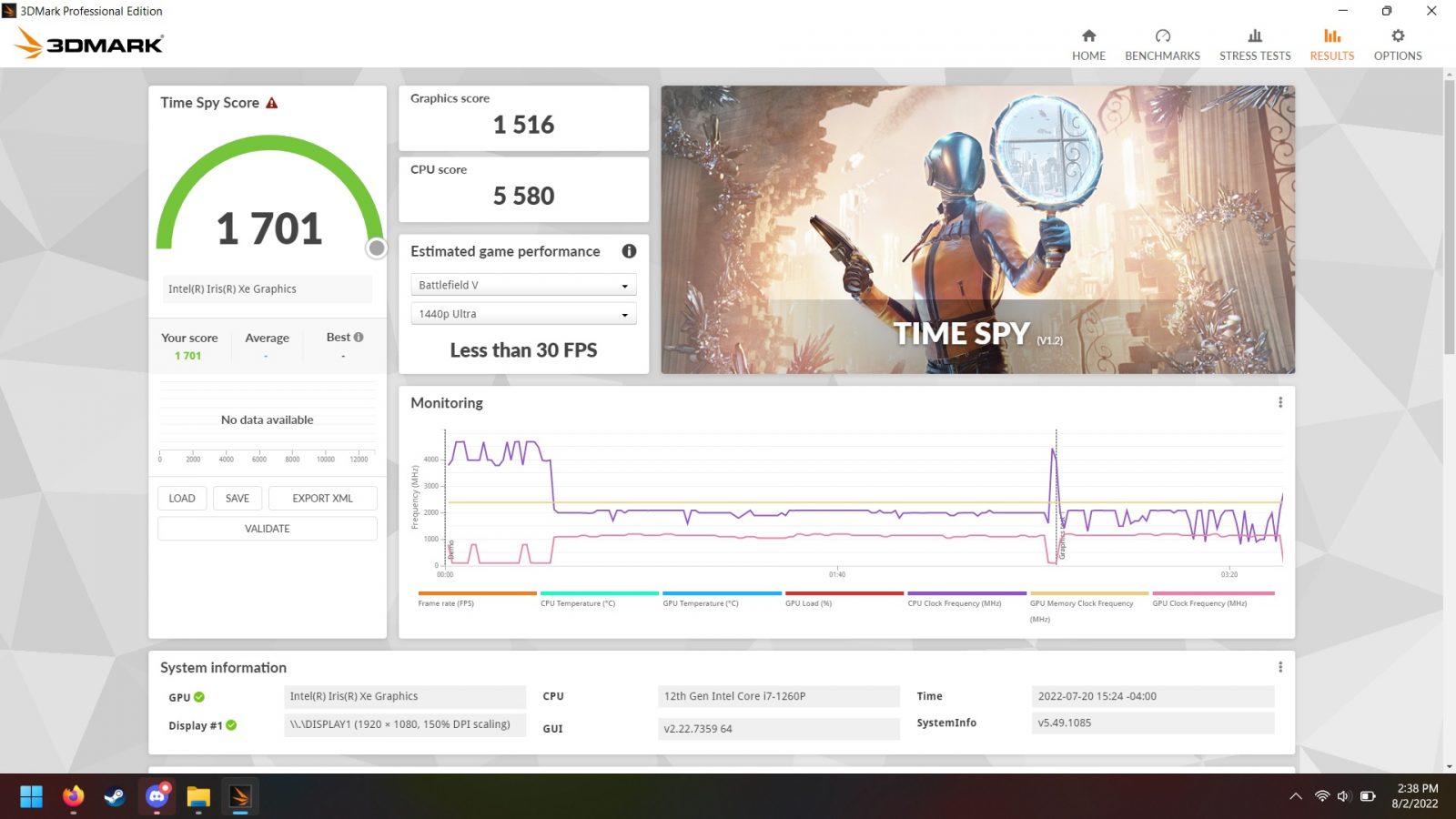 Sadly the screen and audio quality make gaming or even streaming less than ideal. The screen looks great on mostly static images, but introduce some motion and you get some very noticeable ghosting. For games like Persona 4 or Monster Prom, this is a non-issue as the former already has that built in from its PS2 origins and the latter doesn’t have much movement, but anything else and it almost feels like you’re playing on a bad CRT. On top of that, the audio from the speakers is a horrendous quality, sounding hollow and tinny, while also having some weird lag between visuals and audio even when using headphones. It’s not a deal breaker, but for a device that costs $1000 I would have hoped the screen and speaker quality would be at least acceptable.

Finally, let’s talk about the innards. The X30L-J1337 comes with an Intel Core i7-1165G7 processor, a 512 GB SSD, and 16 GB of DDR4 RAM. All that is tech speak to say it can do several things at once and pretty quickly at that. Somehow, this device managed a download speed of 50mbps on my crappy internet connection when I’m used to 2mbps on a good day, likely due to WiFi6 capabilities. That SSD also allows the computer to start and wake up much, much faster than a disk drive – cold boot to Windows 11 only takes a few seconds, while wake up is instantaneous. If you’re using Zoom for meetings, the built in camera and microphone are pretty decent as well with better than standard picture quality. It also comes with a handy magnetic cover, though I do worry that one could easily lose this as it can slip off if you’re playing with it.

The Dynabook X30L-J1337 isn’t quite an all in one ultra portable device, but it comes pretty close. For those looking for a productivity machine that can also handle a few heftier tasks, this is a great option if you can get past the screen and audio quality.

David is the kind of person to wear his heart on his sleeve. He can find positives in anything, like this is a person who loved Star Fox Zero to death. You’ll see him playing all kinds of games: AAAs, Indies, game jam games, games of all genres, and writing about them! Here. On this website. When not writing or playing games, you can find David making music, games, or enjoying a good book. David’s favorite games include NieR: Automata, Mother 3, and Gravity Rush.
Related Articles: Dynabook X30L-J1337, Hardware
Share
Tweet
Share
Submit