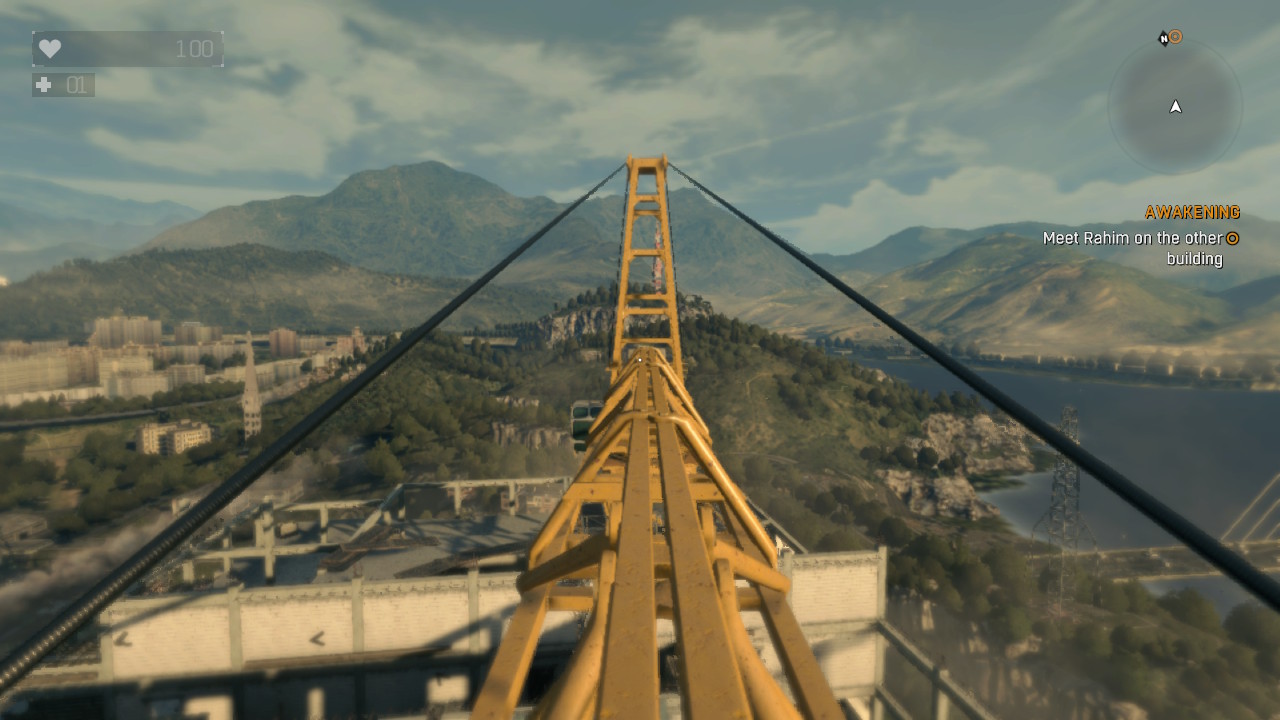 Dying Light is a 2015, open world, zombie parkour game and, after the success of its launch, I have never heard anyone talk about it. Ever. Critics were relatively positive on the game and it sold pretty well, so why is this the case? Well, as many have already pointed out, it’s generic and derivative. The main character is bland white guy #23485 (though he is voiced by Roger Craig Smith, who does a wonderful job with what he’s given), the world lacks cohesion and is filled with the same shades of brown every AAA game of the previous console generation featured, and while the parkour has some wonderful moments it is marred by clunky climbing and night zombies getting in your way too frequently. I heartily agree with former editor Jay Malone’s cleverly titled review; it has novel ideas that it fails to capitalize on by playing it too safe. And yet, there’s something about it that endears me to the game. No matter how “just OK” I know it is, I can’t help to try and see something more in the game and keep my hopes high for the sequel early next year. After musing over this conundrum for much longer than any sane person should have, I think I’ve finally figured it out. It’s the same thing that keeps me coming back to games like Mario Sunshine or Mirror’s Edge: the sheer joy of movement.

While I still find the parkour in Mirror’s Edge more fluid and interesting than Dying Light, the latter’s world has many more options for traversal, especially more than the former’s sequel but that’s a topic for another time. By pressing in the left thumbstick you’ll begin to sprint, and pressing R will launch you vertically into the air in an action colloquially known as “jumping.” Because zombies litter the streets of Havana, you’ll want to stick to the rooftops as you head to quest markers. While there are a lot of neat routes you can string together as you free run, there are just as many weird pace-breakers, mostly in the form of ledges you have to grab after a jump. Grabbing a ledge and pulling yourself up will kill any semblance of momentum you may have had as Kyle slowly grunts his way to the top. This happens frustratingly frequently, at least in the early game. I’m not entirely sure if there’s a perk that mitigates this, but it’s still an annoying issue.

Combat, on the other hand, is slow and deliberate. Your weapons have small reach and break easily on top of your stamina running out quickly, so you generally want to hit a zombie hard and fast before backing off for a moment. Of course, any noise you make will bring more zombies, which presents an interesting dilemma: stay and fight to grab whatever look you can, or run to preserve your current gear. Both choices have merit and could leave you thankful you did what you did, or wondering about the possibility of the opposite outcome later. Unfortunately, night time segments push you hard into running away because zombies become much faster and stronger after the sun sets. They’re so fast and strong, in fact, that one of them touching you is essentially a death sentence. It’s yet another frustration that can kill your momentum in multiple ways, so you want to avoid night unless a quest absolutely forces you to.

As you complete quests, fight, and parkour, you earn experience in three separate categories: Survival, Agility, and Power. Each time you level up in a category, you can choose a perk from that skill tree to augment your skills with things like a slide move or your kick having a chance to stun. Once you reach max level in a skill, you can unlock a fourth Legend tree, though in all honesty I think the skill trees and RPG mechanics are another way the game holds itself back from its true potential. As open world games with RPG mechanics saturate the AAA space more and more, arguably culminating in Cyberpunk 2077 which tried to do so much it failed at most of it, I find myself gravitating towards more structured or linear experiences like Marvel’s Guardians of the Galaxy. I do think they had something going with the open world design here that I want to see expounded upon, but I would also like to have more to see and do in that open world rather than just killing zombies, completing challenges, and securing safe houses to gain experience. Much like Days Gone, Dying Light would greatly benefit from collectables that aren’t tied to the crafting system like new gear or permanent stat increases. 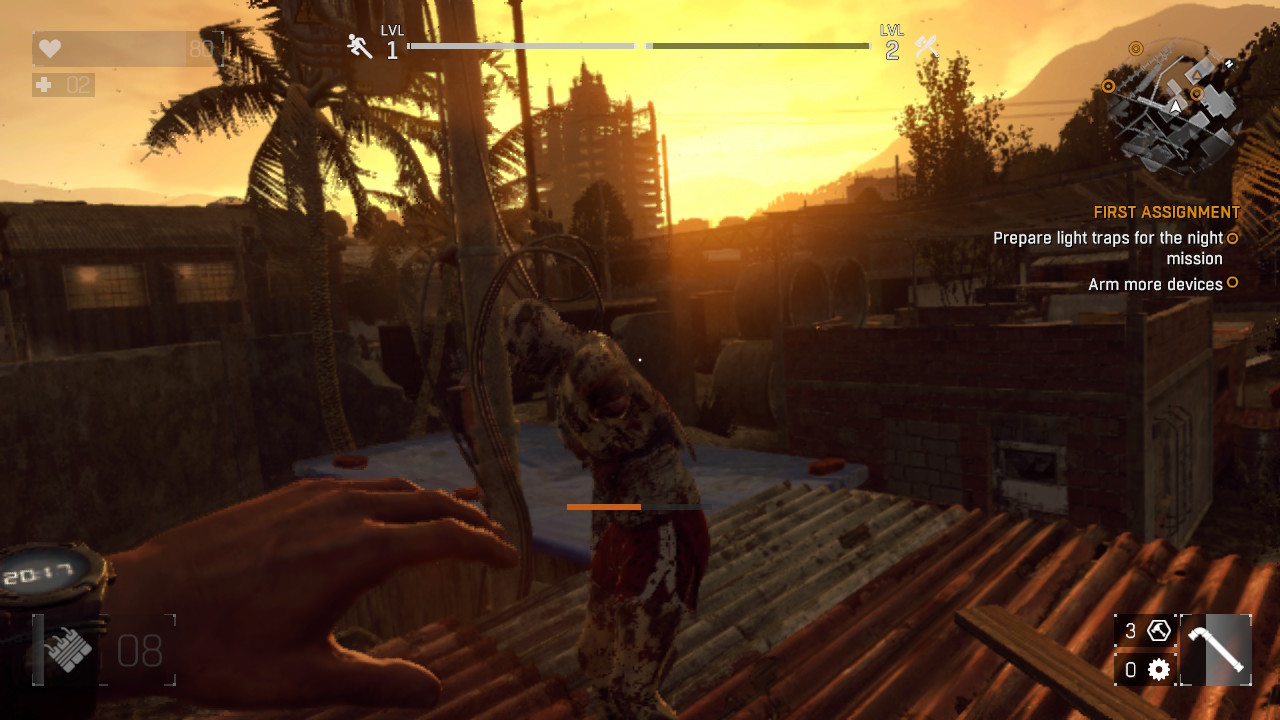 This Platinum Edition on Nintendo Switch includes all DLC including new campaigns you can jump straight into and new outfits. Much like other big games brought to the portable console, it’s incredible that this version exists at all. What you sacrifice in visual fidelity and stability might not be entirely worth it for the portability at the moment, however. Dying Light on Switch isn’t a bad way to play the game by any means, but there are certain shortcomings that make me hesitant to recommend it over a PC or other console version if you have the option. The frame rate, which was recently capped at 30 in a patch, can reach that target fairly often, but it commonly lags or stutters in the heat of action where it matters most. I’ve missed crucial jumps or been killed by zombies because of these performance problems more than a few times, which wouldn’t be so much of a problem if the game had more generous checkpointing. Whenever you die, you’re usually sent back to the nearest safe house which can be annoyingly far from where you were. I often had to run over the same stretch of terrain repeatedly just to get another shot at whatever I was doing, which made the open world less appealing. It’s a weird situation where the small shortcomings of the port exacerbate a design choice which becomes a problem other versions don’t really have.

Dying Light: Platinum Edition is another impressive Switch port, but the game itself is just OK. Its design threw everything at the wall, often to its detriment. While it has some pretty high highs, they lie almost exclusively in the movement. If you do want to chase those highs you’re better off on other platforms until another patch or two comes along.

David is the kind of person to wear his heart on his sleeve. He can find positives in anything, like this is a person who loved Star Fox Zero to death. You’ll see him playing all kinds of games: AAAs, Indies, game jam games, games of all genres, and writing about them! Here. On this website. When not writing or playing games, you can find David making music, games, or enjoying a good book. David’s favorite games include NieR: Automata, Mother 3, and Gravity Rush.
Related Articles: Dying Light: Platinum Edition
Share
Tweet
Share
Submit