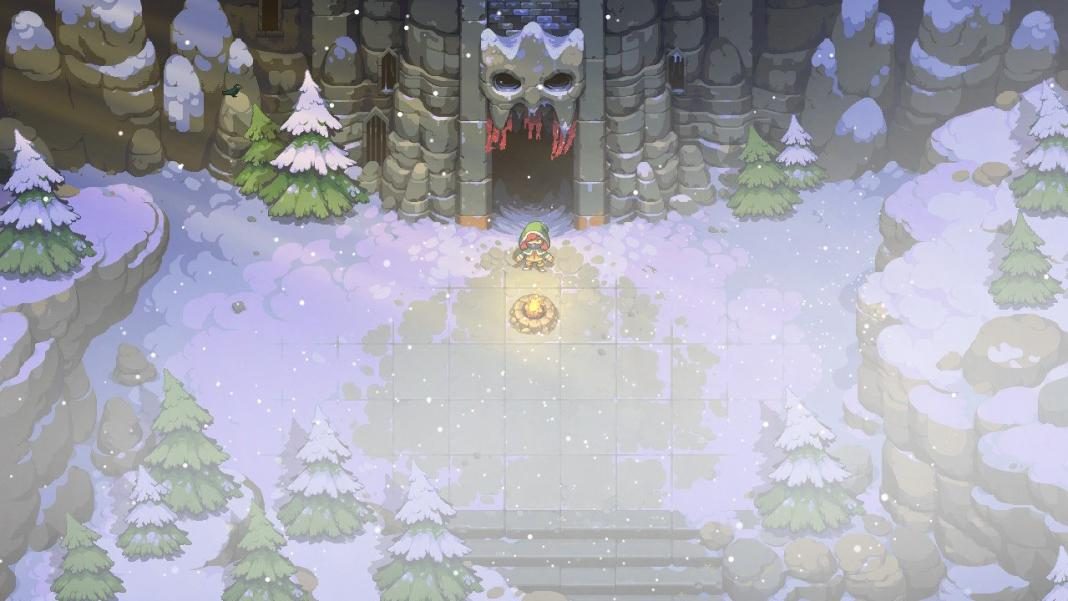 From Toad’s Treasure Tracker to the original Legend of Zelda games, I love puzzle games. 80’s style puzzle games are my favorite for many reasons, and Dungeons of Dreadrock is an excellent addition to the genre and one I had a lot of fun playing from start to finish.

Your adventure begins as you meet your protagonist and her brother. Her brother has been chosen by the elders to defeat the king of the mountain, or so you think. You quickly realize that your brother is in danger and your character, defying the will of the elders, goes in to rescue him. 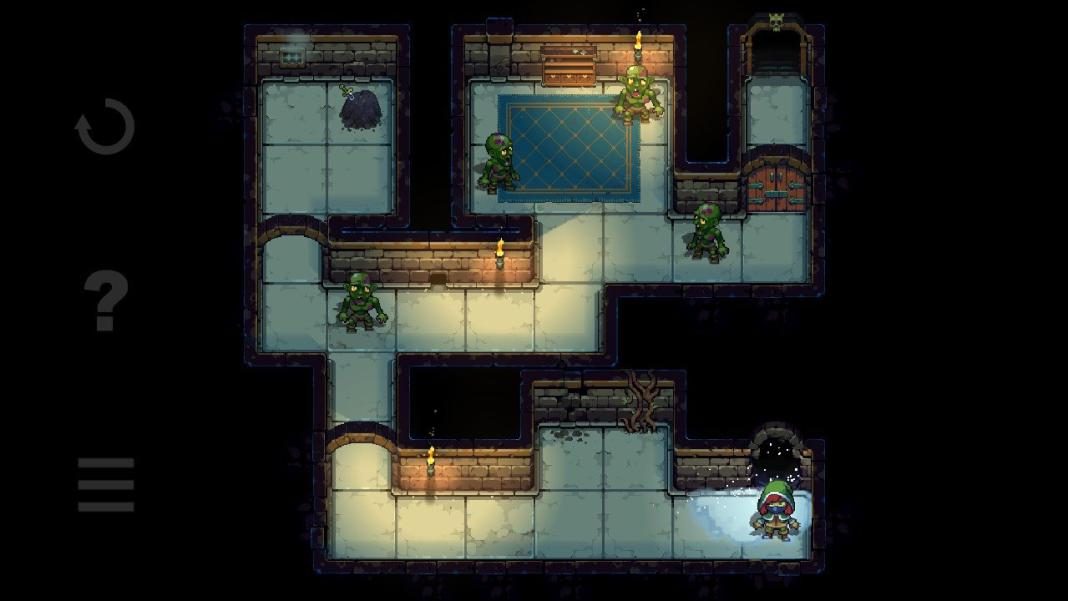 Dungeons of Dreadrock does a great job of teaching you mechanics as you go. Starting slow with a few undead to avoid, then teaching you how to use your sword, and so on. You move on a grid, using either the left stick or the D-Pad (I used the D-Pad because it seemed easier not to make movement mistakes). The further you get in the game, the harder the puzzles become and the more you need to remember, which is all part of the fun.

The game sometimes babies you by letting you know that you’re missing something important in the level, while other times it lets you make mistakes over and over before trying to help explain what’s going on. For example, there was a level where you had to kill enemies on the level above, then throw them down to the next level in order to activate some panels to get the next door open. On my first, second, and even third try, I didn’t pick up on this until I used a hint! Most levels have 1-3 levels of hints, while some of the bigger levels have 3-7 hint levels. Each hint level has a confirmation screen so it doesn’t give you the next hint without you asking. This system allows for you to take the hints you need when in a pinch, without having the entire problem solved for you. 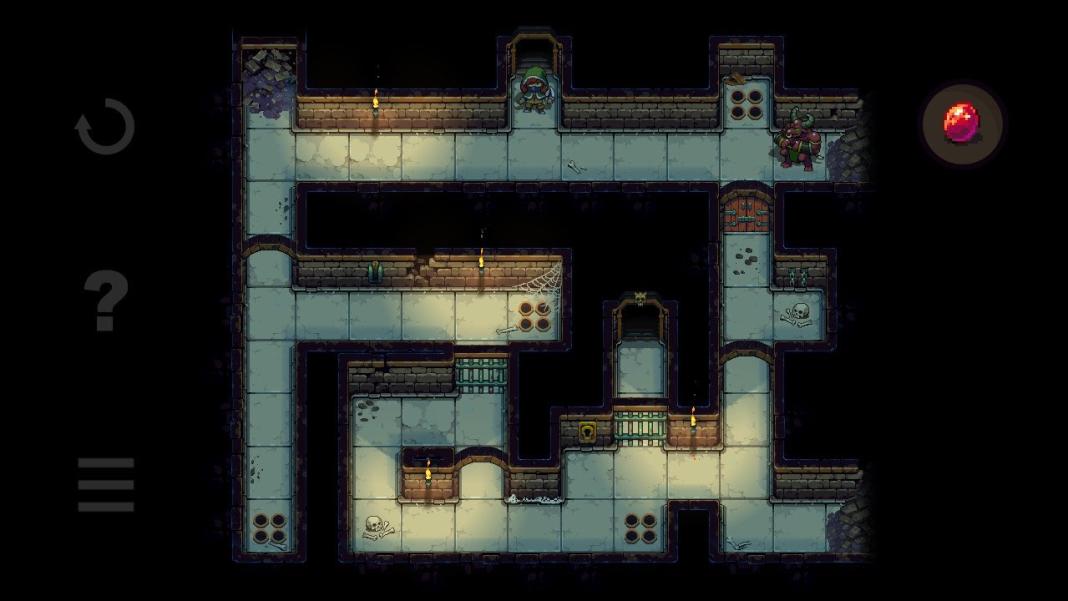 One of the most underrated aspects of this game was the usage of music. The music didn’t play consistently throughout levels, so when music was used it was for very specific reasons. The music added so much emotion to the scenes that needed to be emotional, while feeling epic when it needed to be epic, and ending each level with a theme that was almost a breath of fresh air and a sense of relief knowing you solved the puzzle.

I was impressed with the variety of puzzles throughout this game. From finding items to press down triggers, to using a “beast” to open doors for you, each level felt brand new, which is sometimes hard for puzzle games. There were very few times I felt like anything was repetitive.

At the end of every few levels, there is a fireplace where your character can rest. During these rest times, your character dreams of something happening throughout the dungeon. This generally has to do with your brother being dragged further down, or you having a dream about the big bad guy talking about his evil plan. This keeps the story moving, and for me, was compelling enough that even when I planned to take a break, I was drawn back in and continued on my journey. 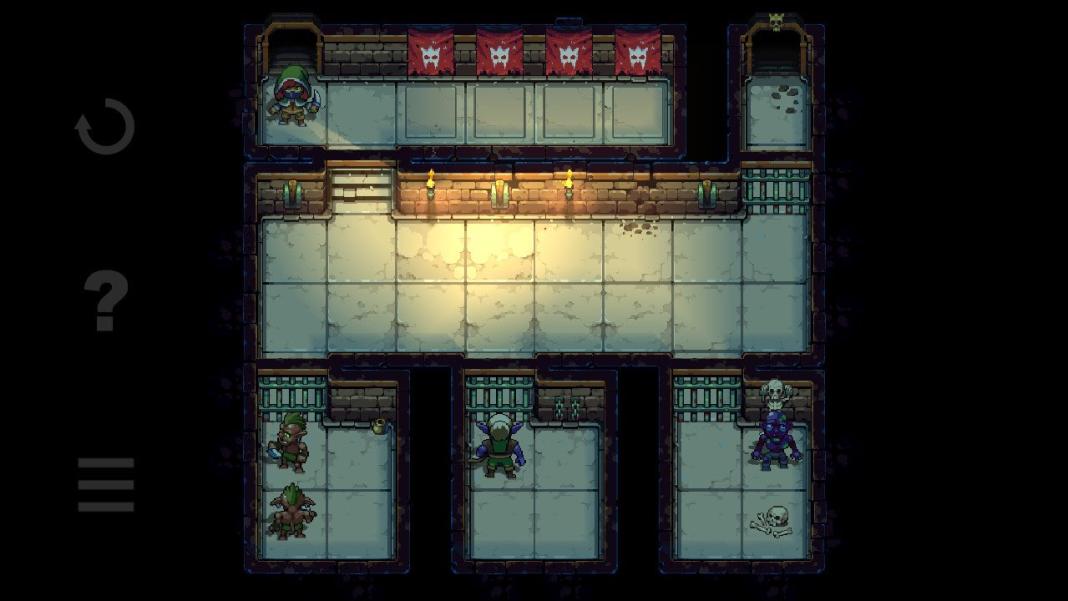 One small complaint I had was the button mapping. There isn’t a lot to press other than your weapon throwing and item usage. However, the choice to put the “restart the level” button as the top middle (X button on the Switch) made me rage quite a few times. I would be in the middle/end of a level and accidentally press that instead of the item usage button and everything would reset. I would have loved to have the restart button be the bumpers or triggers or even the select button. While this is a VERY small thing, it is one of the only things that frustrated me during the game. Other than that, I never ran into glitches, crashes, or anything game breaking.

I played the majority of this game with my partner in crime, Regan, who helped me figure out quite a few of the puzzles. We had quite a lot of fun playing the game together both on the TV and handheld. Having a partner to help with the puzzles also led to using hints less and both of us feeling accomplished when we solved a puzzle.

Dungeons of Dreadrock is a quick game clocking in, for us, at about three-and-a-half to four hours. During this time we enjoyed the puzzles, story, and assortment of enemies. The ending was pretty quick, but in my opinion left the door open to maybe having a sequel. I would love to see more from this world!

Dungeons of Dreadrock is set to release for the Nintendo Switch on May 12th, 2022 and will launch with a launch discount of 50%.

Dungeons of Dreadrock is full of creative puzzles, fun enemies, and a story that drives you to keep going. Fun to play alone, or with friends!

Adam is a musician and gamer who loves his partner in crime, Regan, and their two pets Rey and Finn. Adam is a fan of Star Wars, NFL Football, and gaming in general. Follow Adam on Twitter @TheRexTano.
Related Articles: Dungeons of Dreadrock
Share
Tweet
Share
Submit