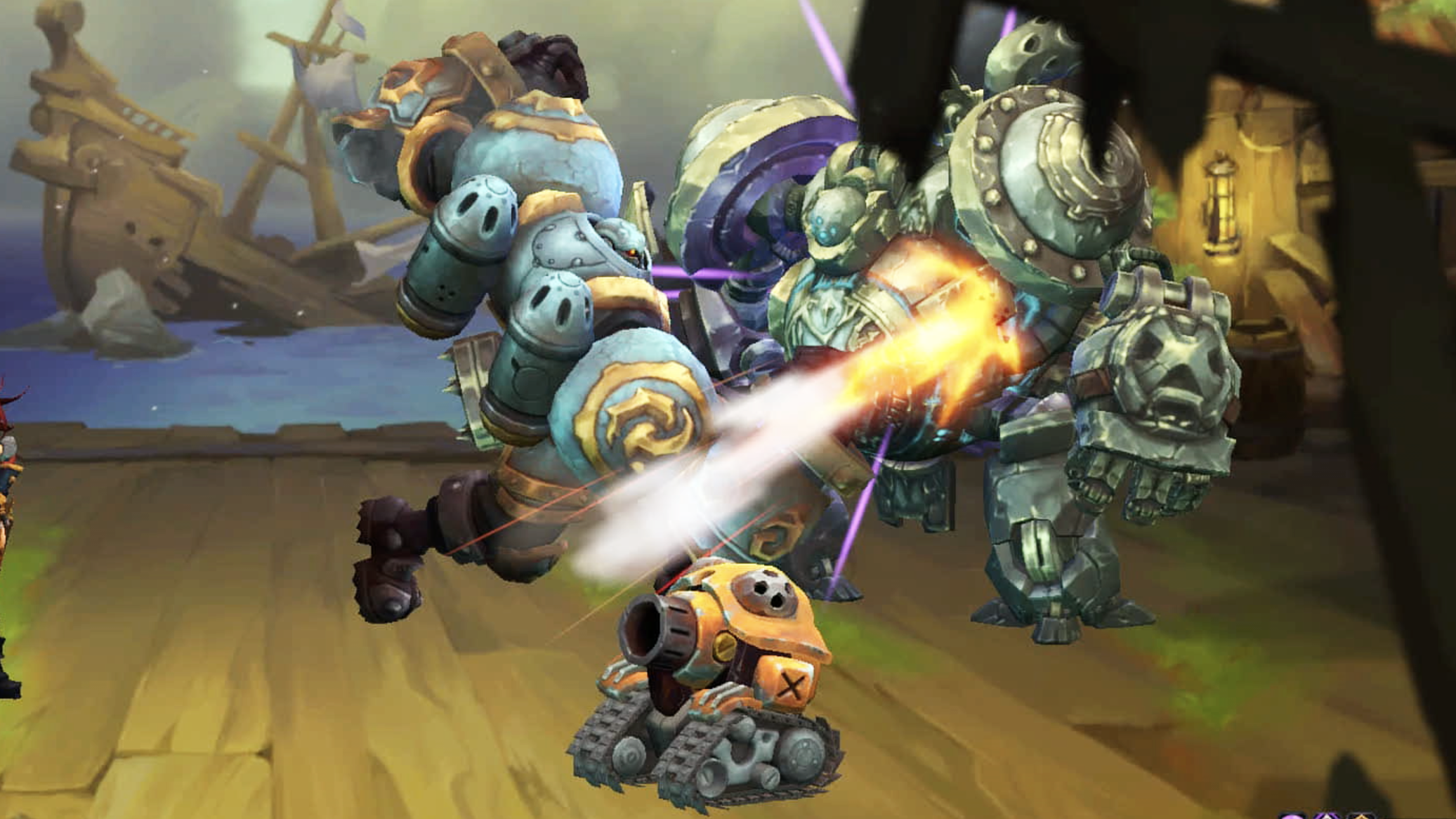 Battle Chasers: Nightwar is a beautiful, full-length, turn-based strategic RPG that has everything you expect from a AAA title, but it somehow managed to do it on an indie budget

Sixteen years ago, I eagerly lost myself in the brightly colored pages of the Battle Chasers Comic, which told the story of Gully, Garrison, Knowlan, and Calibretto, a rag-tag band of medieval misfits whose paths kept crossing with the notorious scoundrel, Red Monika. Their story ended abruptly when the creator, Joe Madureira, better known as Joe Mad, went on to pursue bigger and better things, namely the Darksiders series. Battle Chasers lay dormant, gone but not forgotten, before bursting back to life as Battle Chasers: Nightwar, a full length video JRPG inspired video game, bringing with it all of the wit, character, and magic-tech the comics were known for.

Battle Chasers found new life thanks to a highly successful Kickstarter campaign, and while there are no shortage of Kickstarter success stories, Battle Chasers: Nightwar stands out in a crowd for one distinct reason: You would probably never guess that this was an independant game. Everything about this game is polished, aesthetically pleasing, and high quality. The music is stunning, maps are intricate and detailed, environments have a painterly feel, models are distinct and dynamic, and even though the game’s cut scenes feature animated comic panels instead of full blown 3D renders, they are expressive, gorgeous, and feel right at home with the series comic book roots.

Like all good comic books, Battle Chasers: Nightwar gets right to the story, stranding Gully and the gang in the middle of a mysterious island without an easy means of escape. They’re on the island looking for Mana, which is rare, and that’s really all the backstory you get at the start; fortunately, it’s also all the backstory you really need. Separated and stranded, the group seeks to find each other and flee the island, but in true RPG style, that isn’t so easy. The entire situation quickly escalates, requiring our unruly band to take on the role of heroes as they find themselves facing mounting odds involving powerful artifacts, an immortal villain, witches, demons, and all the other dark, twisted kinds of things you’d expect in a game by the creator of Darksiders.

Fortunately, the team isn’t without allies on the island. Enter Harm’s Way, a small town which becomes the base of operations for the Battle Chasers crew. Filled with mostly amiable villagers, each with great character designs, Harm’s Way offers a variety of shops and resources which every good adventure needs, including a pub where you can rest the night, change out your party members, stock up on stat-boosting food and drink, accept quests, and catch up on the fireside gossip between your teammates. You can also visit the Forge for armor and weapons, the Enchantress for magical goods, the Collector… well… I mostly visit him to be weirded out, and the Beastmistress, an NPC who will reward your relentless slaughter of the island’s wildlife by boosting your abilities in battle.

The island map is impressively large, and laid out like a drawn paper map, complete with crosshatched details. While in the overworld, your characters will keep to pre-drawn paths, which are dotted with nodes, points of interest which can spawn resources, enemies to battle, and can hide special events, if you pay close enough attention. Different regions are blocked off at the start of the game, and new areas unlock easily as the story progresses, though you’re going to have to do a good bit of exploring and backtracking if you want to find all the secrets, side quests, and skirmishes which await you. Traveling that world map is far less of a chore than it could be, thanks to the arcane technology of this world, and the Blink Stations, in particular. The island is connected by a network of teleportation stations which, once found and activated, can be used to quickly hop to every major region of the island, saving you time and sanity during treks back and forth to grind, heal up and grind some more… and you will be spending a good bit of time grinding. But you’ll also also be spending a good bit of time grave robbing, so there’s that.

The majority of the game is played inside randomly generated dungeons, which house not just enemies, but also crafting tables, workstations to add buffs to your weapons and gear, fishing spots, stat-boosting alars, puzzles, treasure, scrolls containing world lore, upgrade boxes, and more. Each dungeon has a small set of core rooms which remain the same, but the rooms leading up to those areas are randomly generated, creating a new map each time you play through. Every dungeon has three different difficulties; the higher the difficulty, the better loot you get upon clearing the dungeon. While the dungeon maps look like like they stepped out of an old-school Zelda game, a series of connected squares, each room is large, complex, and crafted with care. A single room can have several levels, an indoor and an outdoor area, and can even have a completely different layout, depending on if you’re using an in-game item to switch between different realms. Treasure and loot are everywhere, but because barrels, boxes and coffins generally only contain a few coins and some resources, money management remains a challenge in the game, despite the fact that you’re constantly grabbing up goodies. Backtracking to find missed treasure, revisit a crafting station, or make a quick dash outside to heal up at the Harm’s Way Inn is easy, because just like in the overworld, each dungeon has several Blink Station teleportation pads, which are accessible as soon as you have cleared the room of enemies.

Combat is turn based and simple, but that doesn’t mean it’s easy. Each character has a unique set of skills, including Actions, Abilities, and Bursts. Actions are less powerful moves which can be used instantly and generate Overdrive, more on that in a moment. Abilities are more powerful moves which cost Mana and often require time to charge up before use. Characters also have an Overdrive meter, a little bump on the end of their Mana bar which can be filled up by using Actions. Overdrive only lasts for one fight, which gives players a way to use their Abilities often without suffering a constantly empty Mana bar. Every time a character performs an action or takes damage, they fill up the Burst Meter, a communal three-tiered energy bar which enables heroes to unleash a special Burst move, which is rather like Limit Breaks in the Final Fantasy series, and features its own two to five second animation. Finding a way to balance damage output, healing, shielding, and negating status effects against enemies which are consistently exponentially increasing in difficulty is a real challenge–especially given that many enemies have Burst moves of their own. If there is one downside to the battle system, it’s the lack of an auto battle feature, and the inability to pre-enter commands. Grinding sessions can feel pretty long, as you need to pay at least moderate attention to when it’s your turn so you can pick your moves.

Because each dungeon is significantly more difficult than the previous, you’re going to have to spend some time grinding to prepare your team to face new threats. Fortunately, Battle Chasers: Nightwar has given you a whole lot of ways to do just that. You can run through the previous dungeon on Legendary difficulty, earning more experience and hopefully scoring some legendary gear to wear to your new gig. If you’re tired of that scenery, you can try and track down one of the monsters the Beastmistress will reward you for slaying, or you can try your hand at the Arena, a special venue which will pit you against eight waves of monsters for treasure and battle points. There are also a number of sidequests which will have you roaming the map, trying to remember where you heard that voice coming out of the well, wondering where someone would imprison a war golem, and how on earth are you going to repair a set of battle robots? While there is a little back and forth, this is kept to a minimum, except on the rare occasion that the annoyance of running these errands plays into the story itself, leaving you eager to fight the annoying freak sending you on so many fetch quests.

Creator Joe Mad described Battle Chasers: Nightwar as a love letter to the JRPG genre, and he couldn’t have crafted a better tribute. The game is visually stunning, features a gorgeous and compelling soundtrack, combat is challenging, dungeons are large and varied, and while the game doesn’t dive into long history lessons about the land or the characters, it tells an exciting and expanding story about a group of reluctant heroes. Nightwar has everything you expect from a AAA title RPG, but it somehow managed to do it on an indie budget.

Battle Chasers: Nightwar is a gorgeous RPG, with expansive randomly generated dungeons, compelling combat, unique characters, and an amazing soundtrack. Teleportation across maps and within dungeons encourages exploration, and the ability to select dungeon difficulties, as well as the fact that essential game elements, such as crafting and fishing, can only be done inside dungeons creates meaningful replayability and naturally sends you crawling through completed dungeons again and again. Featuring animated comic panels, and avoiding long-winded lectures about history and lore, Battle Chasers: Nightwar is an indie game which delivers a top-tier JRPG experience.