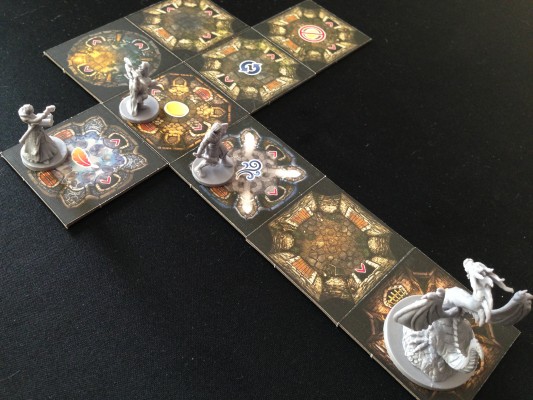 Tom Jolly’s games often make us feel clever, mean, lucky, as if we’re playing alternately at the expense and at the mercy of our friends. His designs give us leeway to bend the rules either just enough to win the game or, as is more often the case, just get ourselves into trouble. It’s the sort of fun that designers have come to learn is best enjoyed in shorter bursts, preferably under an hour, before the chaos and ridiculous situations in a game start to devolve into a quagmire of revenge, negotiations, rules lawyering, or genuine anger. Older games in this vein usually didn’t respect that boundary, extending light conflict mechanics over a canvas that was excessive in length: Axis & Allies, Titan, or Talisman could quickly go south yet take hours to resolve their course, and the journey wasn’t always worth it.

While very much of this era, Tom’s games are thankfully as confined as the dungeons in which he stages them. They often end abruptly, but not before the players get their chance to set up a few Rube Goldberg nightmares that either pay off with a victory or at least make for some good stories. In the context of current casual games, his approach has aged tremendously well and Fantasy Flight’s fourth edition of Drakon is an example of how it can also evolve in response to changing trends. A tile-laying game that carries thematic echoes of Tom’s late 80’s Wiz-War design, Drakon hit the scene somewhat ahead of its time in 2001, when Carcassonne had all but cemented the Euro invasion. In some ways it felt like a precursor to the contemporary thematic/Euro “hybrid,” an exploration of how Ameritrash could be done in a new era, using simple rules and hidden victory points, but adding a toolkit of special effects that players use in a tug-of-war to outmaneuver, derail, and steal from one another.

Hm, that flaming skull is calling to me

The rules were, and still are, dead simple. Each player starts with a hidden hand of four dungeon tiles. On their turn, they may do one of two things: place a tile and draw another tile into their hand, or move their figure through a one-way door to an adjacent tile. The goal: pick up (or steal) some coins along the way, and get 10 points worth of them before anyone else. These points are concealed on the underside of the coins and range from one to three on each, so collecting as few as four coins can sometimes mean victory.

However, as Drakon unfolds, the real building blocks of the game become more apparent, growing beyond this deceptively simple rule set through a handful of deviously exploitable mechanisms. Almost every tile grants a special action to the player who lands on it, but none of these actions can be taken in the same turn in which the tile is placed (remember: place a tile, or move into one, not both). Also, while all doors are one way, players may eventually connect rooms to form a loop, allowing (or forcing) players traveling along this circuit to repeat each special effect as they re-tread their path.

These chain-able but delayed special effects become the distinguishing factor in the game, changing it from what could have been a tame Euro-ish melding of Carcassonne and Tsuro into something much more entertaining, interactive, and chaotic. Some effects, of course, allow the player to pick up or steal a coin. Some force them to lose a coin. These are natural candidates for plugging into a devastating loop, which also means that other players will be on the lookout for them, using an arsenal of other effects to either derail opponents or piggyback off of their success. These can include Mind Control to force another player to move, a Floating Chamber to move your tile and join a favorable path or break out of a bad one, or one of my favorites for comedic effect, Magic Harp, forcing adjacent players to move into that chamber, which of course will be placed somewhere useless or dangerous, perhaps next to the titular Drakon herself. Yes, she’s a dragon, although in this kinder, gentler design this dragon doesn’t eliminate players (that would have been like… so 1980), but rather steals a coin from the player and sends them screaming back to the entrance chamber. And yes, you can send Drakon lumbering through the dungeon toward your foes, provided you can manage to land in the right chamber.

Perhaps if I stand very… still

There are many more available effects such as these to exploit but for the sake of brevity I should leave this to future players to discover. Due to the built-in lag time between setting the tiles and moving into them, thereby allowing opponents to interject their own plans, these effects pile up and chain into a treacherous mess of programmed movement that can make players tentatively feel brilliant for what they’ve set up, or become the hapless victims of an often self-made contraption gone horribly wrong.

Whoever can glean ten points from the chaos is instantly the winner, which can take anywhere from 20 to 40 minutes to accomplish, hitting that sweet spot in game length for a filler of this type.

Since this is a Fantasy Flight production, it should go without saying that the components are top quality, especially for a more modestly priced game such as this one. While the miniatures are of a slightly smaller scale than current generation Descent figures, they’re still nicely detailed, and the tiles are of typical sturdy quality with some appropriately dark dungeon atmosphere and clear iconography for the chamber effects. Fantasy Flight also added some illustrated character cards for the six heroes, with one-shot abilities that can be used as a minor variant for the game. I recommend throwing them in since they add some uniqueness to the characters and give players an extra trick to bring out at an opportune time.

A couple of additional variants are provided such as team play and an “escape with the loot” condition, but I personally prefer the original, quicker, more cutthroat game mode. With the release of this new edition, I also hope to see an eventual reprint of Cave Troll, an area control game which, along with Drakon and Wiz-War, would complete a trifecta of Tom Jolly designs that continue to hold their own in the current crop of shorter games while maintaining a unique character and chaotic quality that proudly hail from an earlier, more brutal era of conflict games.

I'm glad to see Drakon finally being resurrected. It fits perfectly into a filler time slot while providing enough choices and allowing for enough creativity and cunning to impart a little more heft to the gameplay than most casual filler games. Any fan of Tom Jolly's older conflict games such as Wiz-War will also want to look into Drakon since it provides a similar level of chaotic maneuvering but with a shorter play time.