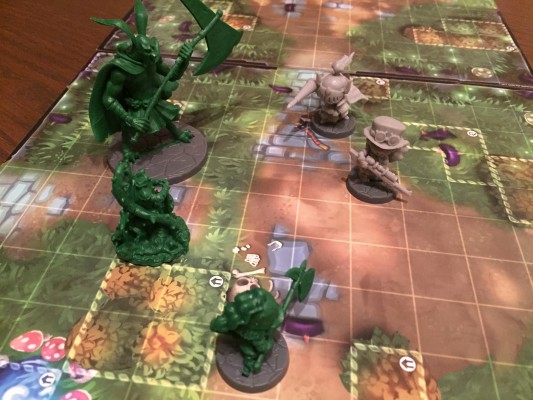 I remember playing Super Dungeon Explore and feeling that it was a great representation of Gauntlet. While I really enjoy the original Super Dungeon Explore, a few issues came up. The game length was too long, and I felt that the Consul power (the player controlling the monsters in the dungeon) had a difficult time defeating the heroes. Soda Pop Miniatures created a sequel with The Forgotten King to correct some of the issues with the original, as well as create new heroes and enemies that expand both games.

If you want to get an idea of how Super Dungeon Explore plays, then check out my review of the original. The Forgotten King includes a Classic mode that mimics the original gameplay of SDE with a few differences. The number of tiles, chests, spawning points, and mini-bosses directly relates to the number of heroes entering the dungeon instead of the length of the game you want, giving the game a more uniform feel. Of course you can lengthen or shorten the game by adding or removing tiles or having players use multiple heroes. These choices would affect the number of spawning points and mini-bosses as well.

The fiddly Adventure Tracker board is gone. Instead the Loot and Treasure decks are placed to the side. Instead of counting damage and gaining Loot cards when the token passes a LOOT space on the Loot-O-Meter, the heroes gain a Loot card for every minion and elite monster destroyed. Treasure cards are drawn for every mini-boss and boo booty (fake treasure chest) killed during a hero turn, with mini-bosses releasing their grasp on a dungeon key with their final breath. Spawning points release princess coins when ground to rubble. Having item drops from creature deaths feels more accurate thematically and rewards killing monsters instead of just wounding them. A new Explore deck has heroes draw a card when entering a new tile. These cards can spawn extra enemies or give the tile special effects, such as reducing the range of the heroes’ ranged attacks.

The Consul turn drastically changes. Instead of taking a turn after all the heroes have finished, the Consul gets a turn after any hero activation, giving him more to do throughout the game. However, the Consul can only spawn monsters or activate them during his turn. Only a small number of monsters can be activated, so choosing which ones to use requires more strategy. Monsters can be placed within two squares of the spawning points. I’ve encountered the problem where every spot around the spawning point was full, so I appreciate this change. Spawning monsters also wounds the obelisk, helping the game to end faster because the boss fight occurs when all the spawning points fall.

Sometimes everyone wants to play on the same team instead of ganging up on someone, or no one wants to play the bad guy. Sometimes you are alone and feel like a dungeon crawl, or you want to learn the mechanics for a game before everyone else comes over. That’s where the Arcade Mode comes in. Players choose three to five heroes to enter the dungeon. Then the selection of monsters along with their spawning points, creeps (minor monsters to supplement the spawning point monsters), the boss, and mini-bosses occurs. The tile selection happens, and the dungeon is built. Finally the treasure, look, explore, and command decks are shuffled.

Play progresses differently in Arcade Mode. During the hero turn, players activate two different heroes, draw the appropriate number of loot and treasure cards, and equip cards if desired. If any mini-bosses are killed, monsters gain bonuses. If a spawning point is destroyed then a new mini-boss is added to the game. Once the heroes have taken their turn, the Consul turn takes place. Any monsters that were attacked, on a tile with a hero, or adjacent to a tile with a hero are considered disturbed. Then monsters are activated in order according to their class, generally from largest to smallest. A command card is then drawn to show what the disturbed monsters do on their turn. These include spawning new minions, moving monsters, performing unique abilities, and attacking the heroes. Then the heroes take their turn again.

Having the Consul turn go after two heroes helps to keep everyone involved while giving enough movement within the dungeon that strategies will need to change constantly. It takes a few turns to get the order of operation down, but it becomes second nature quickly. Having the AI doesn’t feel as menacing as having a human Consul, but sometimes it feels good to be with friends and just kill minions. I’m glad to see that the monsters get tougher as the mini-bosses are destroyed though, as there should be some challenge as you get further into the game.

While this may sound intimidating, Soda Pop Miniatures has done a great job giving examples of play, as well as the definitions of the special abilities and other terms. The rulebook is full of pictures showing different concepts and rules explanations. However, some forward and backwards flipping is necessary to read some of the concepts in detail.

Several differences exist between Forgotten King and the original Super Dungeon Explore. Therefore, the figures that came before this game require new cards to work with the new system. While you can get a separate upgrade deck that retails for $15, it would have been nice to include the cards for at least the base game with this set. More sets are available as well, and if you’re like me you’ll want more variety than what’s included in the box.

If you were intimidated by the fact that the original Super Dungeon Explore had pieces that needed to be glued together, don’t worry about it. These single mold figures require no gluing. All you need to do is open the box and punch out the tokens. No more accidental super gluing together fingers. All the figures feel solid so you don’t have to worry that pieces will accidentally break while picking them up or storing them.

Ninja Division has done a great job in streamlining the original Super Dungeon Explore with the Forgotten King ruleset, as well as adding a cooperative mode. While it still takes a large amount of space on the table, the Adventure Tracker is no longer used. Everyone stays more involved in the game, and the Consul and adventurers feel more balanced. Still, the game can drag on a little longer than may be desired, but you can always bring out the big boss early if everyone agrees. The Forgotten King will be a welcome addition to any Super Dungeon Explore fan, and it’s worth a second look to those who had issues with pace of the original.

While not working as a Database Administrator, Keith Schleicher has been associated with Gaming Trend since 2003. While his love of video games started with the Telestar Alpha (a pong console with four different games), he trule started playing video games when he received the ill-fated TI-99/4A. While the Speech Synthesizer seemed to be the height of gaming, eventually a 286 AT computer running at 8/12 Hz and a CGA monitor would be his outlet for a while. Eventually he’d graduate to 386, 486, Pentium, and Athlon systems, building some of those systems while doing some hardware reviews and attending Comdex. With the release of the Dreamcast that started his conversion to the console world. Since then he has acquired an NES, SNES, PS2, PS3, PSP, GBA-SP, DS, Xbox, Xbox 360, Xbox One S, Gamecube, Wii, Switch, and Oculus Quest 2. While not playing video games he enjoys bowling, reading, playing board games, listening to music, and watching movies and TV. He originally hails from Wisconsin but is now living in Michigan with his wife and sons.
Related Articles: Super Dungeon Explore: Forgotten King, Tabletop
Share
Tweet
Share
Submit