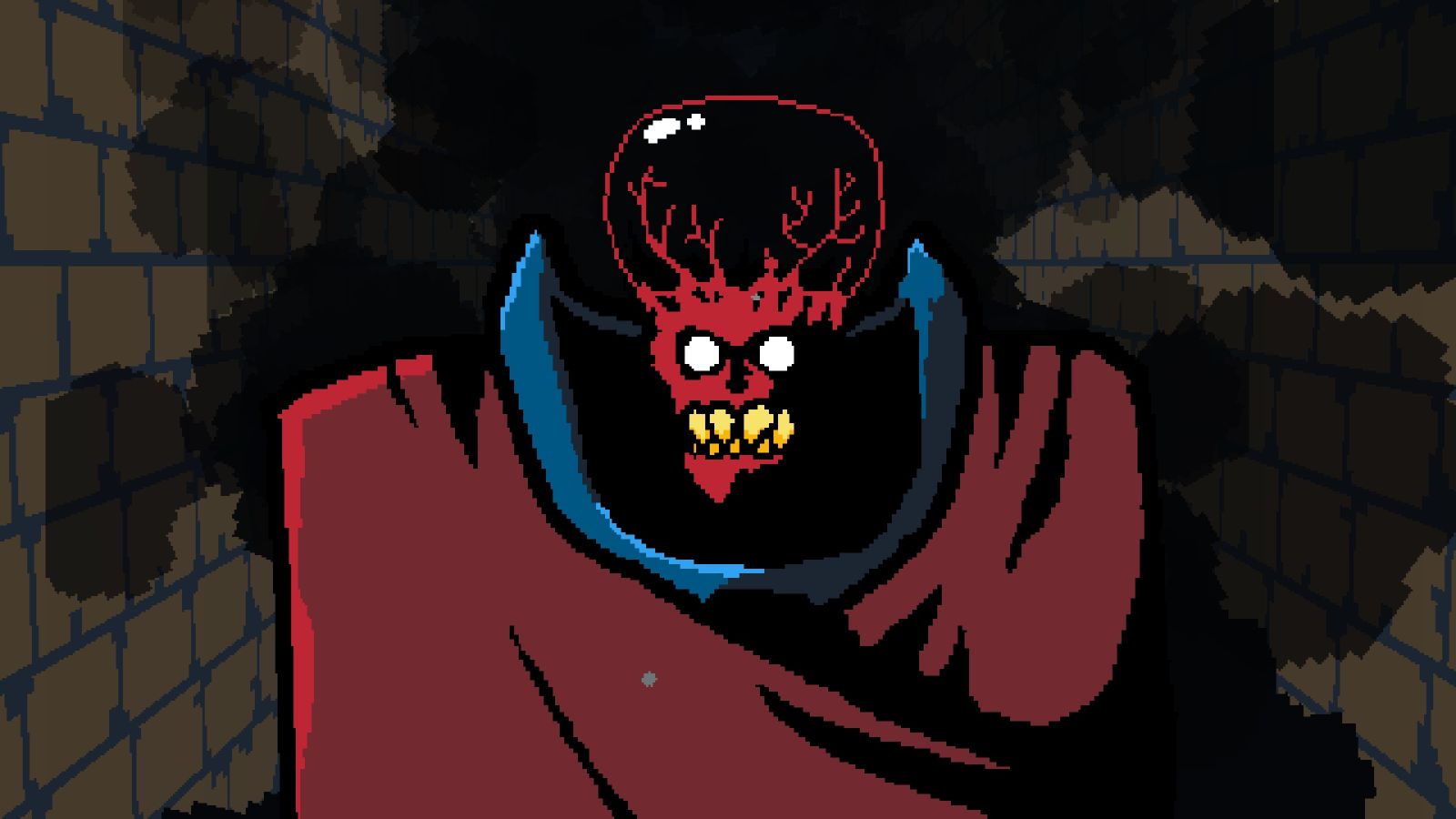 This game is an unholy concoction of every sport I was never good at and every genre I still try to avoid, but chief among my concerns is…how I actually found myself enjoying it. It might be the fast, frenetic take on turn-based action that’s winning me over. It could also be the simplicity—not many pieces on the board, but each one goes a long way. Or, maybe I’m just happy to finally be good at one of these things. Two truths, one lie. Jokes aside, Dungeon Deathball is a bite-sized roguelike all about making slick plays and chasing scores.  It’s a refreshing break from the often brutal cycle of failing and learning, more focused on handing you big wins and pointing you towards even bigger wins on the horizon.

Your teams will eat dirt, of course—a fair amount of it. What you’ll appreciate, though, is how the game fast-tracks the learning portion and keeps that learning curve smooth and shallow. Dungeon Deathball is not nearly as intimidating as your typical roguelike. Your first clears come relatively quickly, and every subsequent run becomes about optimizing your turns for better ratings. Runs consist of 12 stages, each one tougher than the last, split into 4 acts. Each act introduces new monsters and obstacles to make reaching the end zone more difficult for your team. 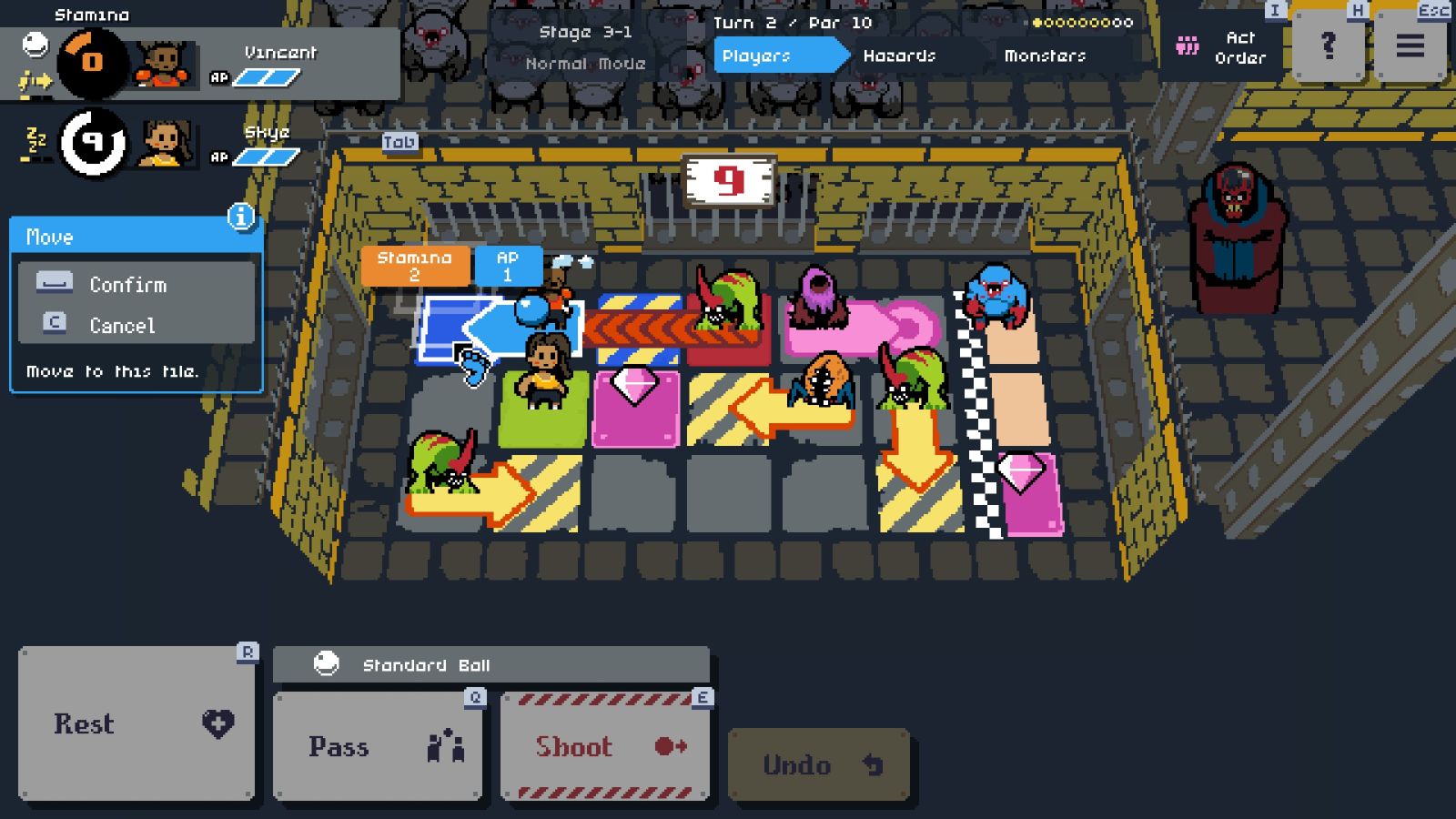 Gym class is looking a little different these days.

A pinch of football, a small helping of dodgeball, a sprinkle of the other football, and a dash of golf and you have Dungeon Deathball. Pass the ball, shoot the ball, murder monsters, and score touchdowns, preferably under par. Despite the grim circumstances—your poor athletes-to-be trapped in pseudo-hell and all that—the game’s upbeat tone invigorates you and gets you ready for the next run. The moment-to-moment decision-making combined with satisfying feedback is definitely the cornerstone of the experience. Simple yet striking sprite work and a soaring chiptune soundtrack are strong complements.

Your tiny team of two starts out on the left side of a grid-based arena, with monsters protecting the end zone on the right. Each character is allowed two actions per turn. They can move and attack, but if they’re holding the ball, add shooting and passing to the list of actions. Every action costs stamina, which they can regenerate through passives or by spending an action resting. Actions taken with the ball in hand drain more stamina than those without. After you expend your turns, the monsters get theirs. The opposing team only gets one action per turn, made up for with their superior numbers, and each move or attack is telegraphed one turn in advance.

Not only is your team lacking in numbers, but they also can’t take nearly as many hits as the monsters. In fact, they can’t take any. One hit and they’re lost to the void forever. Between stages, you can spend gold earned during the previous stage on a replacement. If they’re both still kicking, you’ll have more to spend on passive upgrades to strength, stamina, and a unique skill inherent to each character; one might have the ability to regenerate stamina each turn, another might be able to safely stand on spike traps. Costs run high and only get higher as your team gets stronger. I was going through multiple characters per run, until that watershed moment when I realized I should be playing to each character’s strengths. 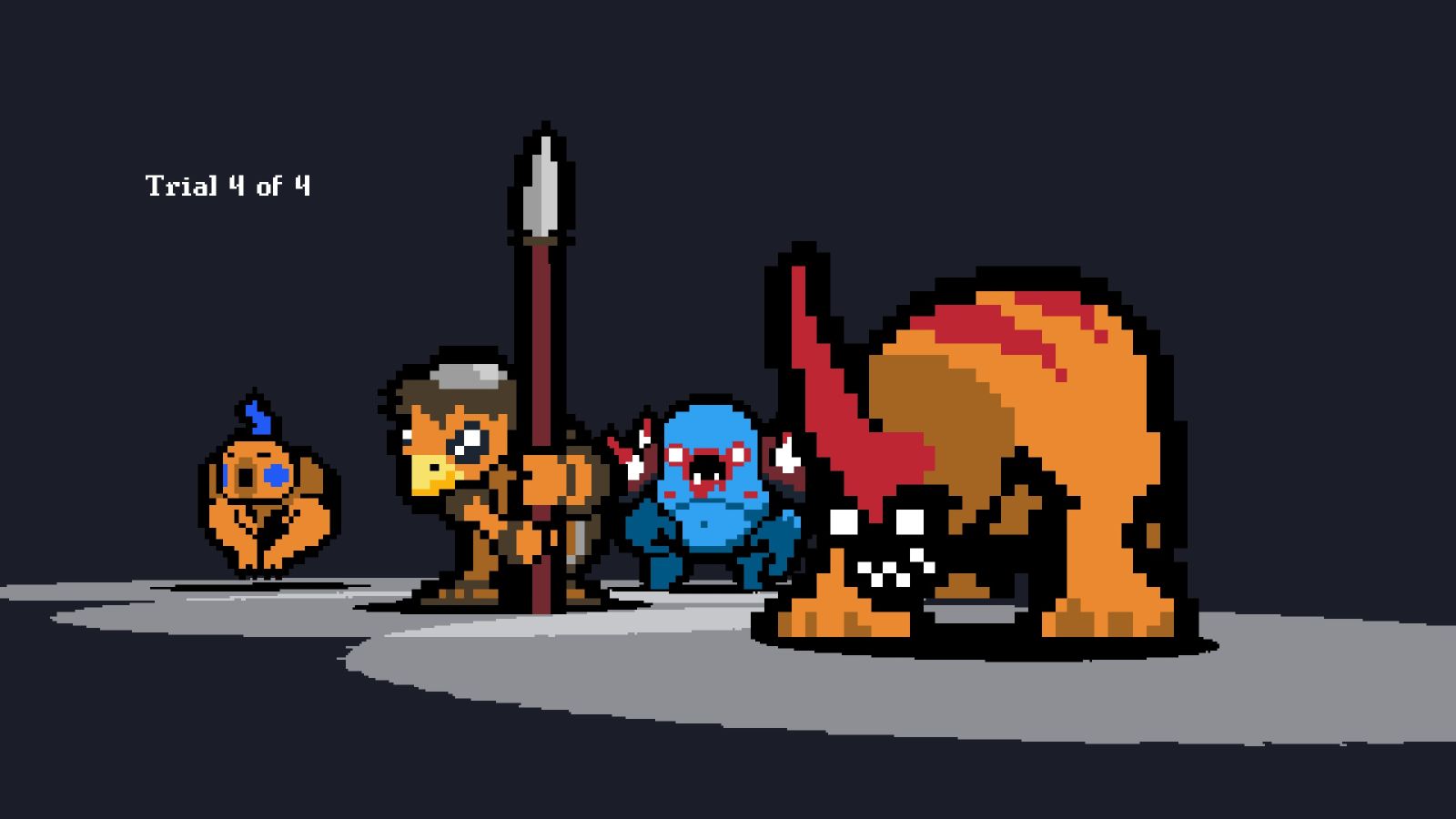 Sure not rooting for this team.

There are a handful of roles that characters can play, and those roles are predetermined based on the team type you chose. Maybe you want two runners, good for making a mad dash for the end zone, for example. Just like the characters, the monsters also fit into certain roles. There are goalies who protect the end zone, monsters who only chase after the ball carrier, and roaming monsters who attack whomever they see. Also spicing things up are the myriad monster types with unique movement, health, and attack parameters. My personal favorite (read: most hated) monster can catch any balls you shoot at them.

Dungeon Deathball’s fairly barebones ruleset compared to other tactics titles is a strength more than it is a weakness. Gameplay revolves around using your limited actions to manipulate monsters into blocking or even destroying each other. It’s incredibly rewarding to see your off-the-cuff decisions payoff so spectacularly, watching monsters stumble onto spike traps or a chain of monsters smacking one another. However, the restrictive arena size and monsters’ clockwork behavior beget the same outcomes over and over. I saw myself resorting to the same strategies despite the random enemy placements, with great success. They’re too claustrophobic, without any room to experiment in.

Your score each stage is based on a number of factors—turn count, gems collected, and whether or not you scored a touchdown (crossed into the end zone with the ball in hand) being the big three. This score can be modified by taking a modified ball into the match, granting a boon or a bane. Naturally, the helpful ball reduces points earned and the bad one increases gain. The more times you use either ball over the course of a run, the higher your score boost the next time you use it. Buffs and debuffs are served up at random, so luck does play a part in determining how successful your runs will be. If you’re unfortunate enough to come across a truly brutal debuff like the ball that prevents carriers from using actions, consider your score bonus lost. 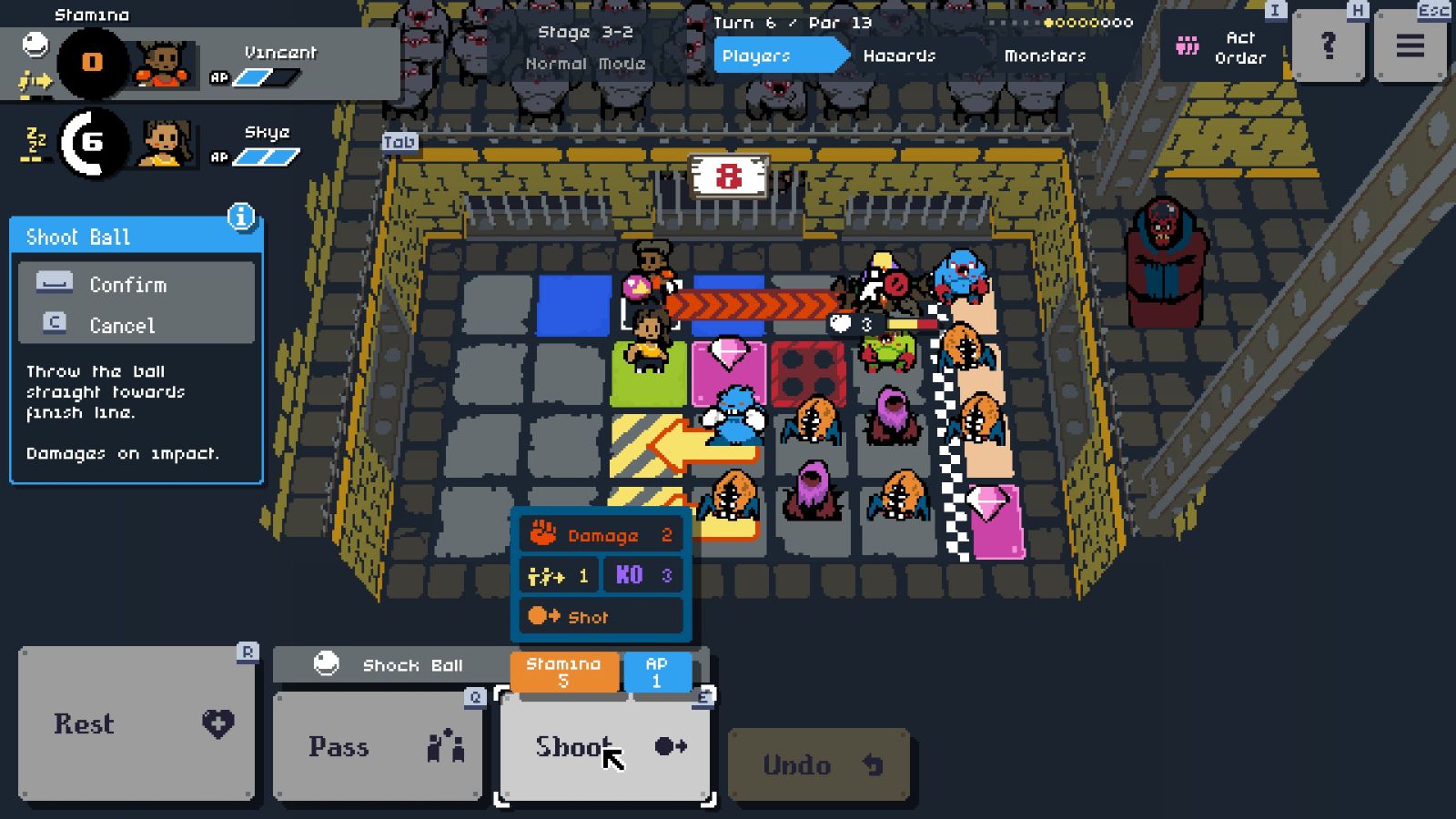 One ball and a dream.

Unlockable modes throw in a few extra curveballs like the Action mode, which gives all your characters an extra action per turn in exchange for more monsters in each stage. All these extra bells and whistles try to spice up the gameplay and they do succeed, to a degree. The oddball, lively tone of the game is sustained by these gameplay quirks; Dungeon Deathball owes a lot to its quirks and controlled randomness. There aren’t any “low” moments to be found, but the game never reaches any considerable highs either. These modifiers and random parameters only do so much to nurture diverse playstyles and interesting gameplay scenarios worth seeking out. Very rarely is there a moment that really stands out or a run that sets itself apart from the pack. Ultimately, all the runs just kind of blend together.

What keeps you playing isn’t necessarily the variety of content or playstyles, but rather the competitive element. Leaderboards, daily challenges, and the overall emphasis on score is what gets you to load up the game each day. Still, the moment-to-moment gameplay is interesting enough to make a run engaging thirty minutes in. You roll the dice a lot but, generally, the challenge level hits a sweet spot, though you’ll be recycling strategies perpetually. It’s worth it to squeeze a run of Dungeon Deathball into your schedule; it’s good fun, a solid time-killer, and keeps the ole noggin working hard.

A quirky, bite-sized roguelike all about slick plays you make and highscores you break. It does a lot with relatively little, but you’ll quickly find its limits.

A self-deprecating, overly sarcastic pair of glasses that occasionally possesses a human host in order to partake in the delightful process of playing video games, then immediately complaining about them. When he is not playing games (a rare occurrence), he can be found either writing about things that no one cares about, or haunting the quiet streets of his Canadian suburb.
Related Articles: Dungeon Deathball, Indies
Share
Tweet
Share
Submit