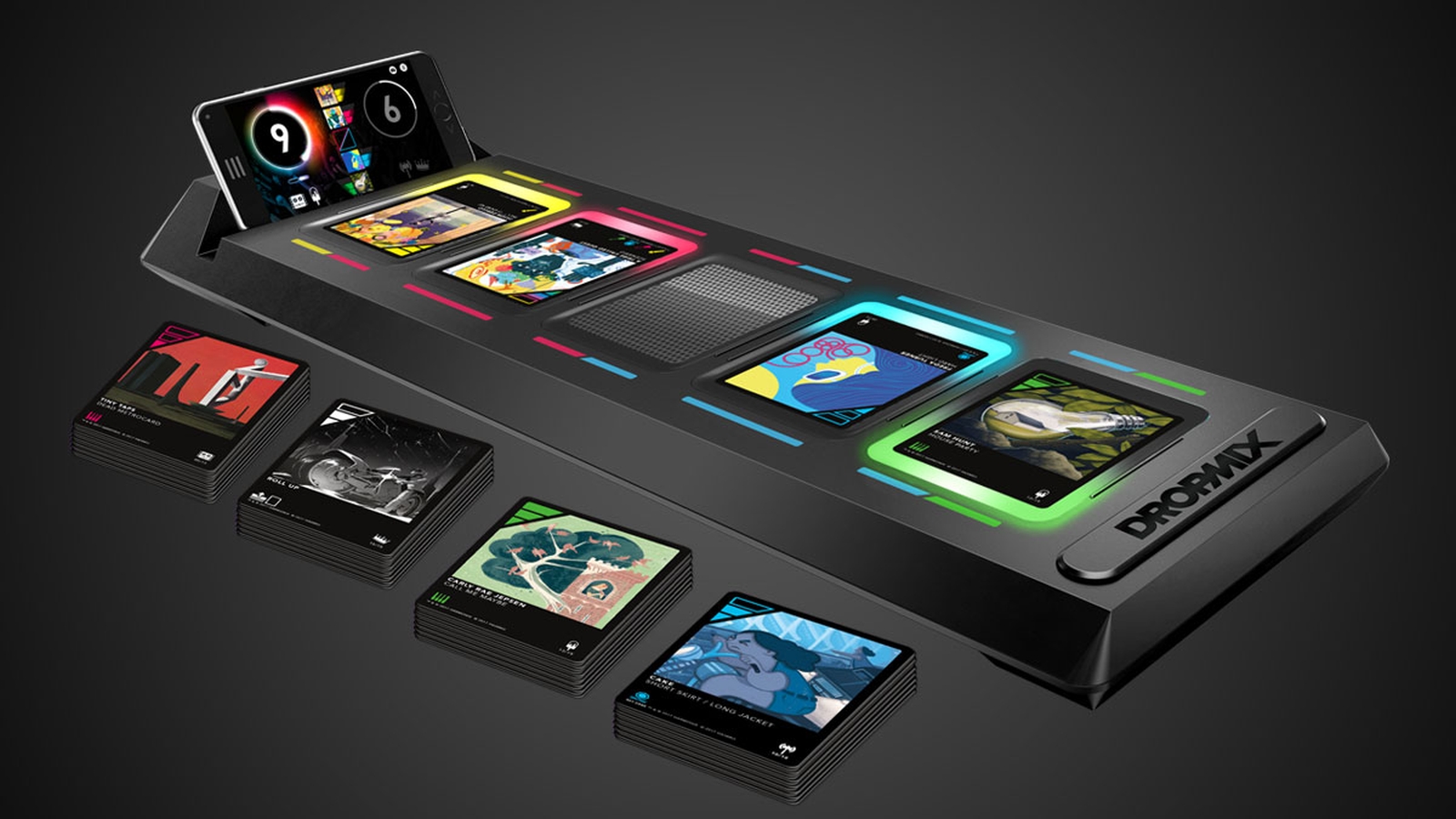 If you’ve been a devotee of Harmonix for a while, you know they seem to have one overriding goal — to make music luddites sound like Mozart.  Frequency and Amplitude, Guitar Hero 1 and 2, Rock Band 1 through 4 and its offshoots, the Dance Central series, and their more experimental titles like Rock Band VR and SingSpace all seem to bear this out.  Now, they’ve partnered up with toy giant Hasbro to bring us something completely new.  Entitled DropMix, this newest entry into the musical gamespace looks to combine the best parts of Rock Band and Dance Central, with a dash of games like DJ Hero to create something completely unique.  Built for the musically inclined and tone deaf alike, it once again demonstrates that Harmonix can turn a digital dimwit into a veritable Vivaldi.

DropMix is a bit of a deconstruction in motion.  The game ships with 60 cards, each representing a different part of a song.  Drums, vocals, bass, keyboards, and guitars round out the types of cards, each being color coded yellow, red, blue, or green.  These, combined with the colorless effects cards, as well as the multi-colored wild cards, are played on the according color spaces.  As they are played, they begin to form a song from the various components, mixed in real time.

There are three play modes in DropMix.  Clash lets you play off against a friend, or pair up for 2v2, which is where the other symbols on cards come into play.  Every card has a one, two, or three dot power rating.  Playing a single dot starts the mix for that musical segment.  The other player can keep it going and switch it to a different musical track by playing a single dot of the same color on top of that card, or they can escalate it to a two or three dot.  The five slots on the DropMix table each have one or two colors associated with them, and you can only play equivalent or higher, and only within the same color, so strategy begins to form pretty quickly.  Here’s a quick look at the tutorial from Harmonix to give you an overview:

In Party Mode, players on each team can decide what to play, but more points are given based on the speed of which cards are dropped.  The game will make “requests” ranging from a simple color to playing two card types, or even asking you to match two cards from the same artists.  Missing your turn causes your team to get a strike for one of your actions, as does placing a card incorrectly (mismatched dot level, wrong color, etc.), which happens more frequently as the clock ticks down.  The faster pace and ticking clock creates pressure not present in the more strategic-paced Clash mode.  While many elements of the game are the same, it is a different beast.   Here’s a quick video showcasing Party Mode, as seeing (and hearing) is better than reading in this case:

The objective in both modes is to race to be the first player or team with 21 points.  Each card you play is worth a point, and you get two actions per round.  Modifiers like the effects card add, as the name suggests, sound effects to the mix, but they also frequently have a modifier that adds additional points for play.  Sometimes they add another card to your hand, steal points from your opponents, or even shuffle out three cards at random to be replaced from your draw deck.  After a few rounds it became apparent that the music, while awesome and fun, aren’t all that important to the actual gameplay, at least in these two modes.

While the variety of cards already delivers some solid strategic elements, there’s an excellent modifier to add to the mix — the giant DropMix button.  Hammering this button lets that team or player give up one of their actions for a spin of a roulette wheel with a few outcomes.  One wedge causes a team to have to pull designated cards from the board, resetting the mix (which is how you can drop the dot level for a section when you have no cards of that type to play), as well as removing the points that team earned for those cards.  There’s also a wedge that does absolutely nothing, other than costing you one of your precious turns — risk/reward at its finest.

The third mode for the game is called Freeplay.  As the name suggests, this mode is all about the music.  You can play whatever cards you like, creating awesome mixes based entirely on your choices, and then save and share them with your friends.  Better still, the rules come off completely, so you are free to play colors in any slot here. I’m a percussionist, so it was lots of blended drum tracks for me. My wife the singer was blending Gloria Gaynor’s I Will Survive with The Weeknd’s Can’t Feel My Face with a dash of Carly Rae Jepsen’s Call Me Maybe.  Why?  Why not, and that’s kinda the point.  You can save and share your mixes, though we ran into an issue there.  While our Google Pixel phones had no issues sharing our mixes, our iPad Air reported that exports are unsupported on that platform.

The track list included in the game is quite diverse, including tracks from artists like Sia, Imagine Dragons, Disturbed, Bruno Mars, Aftrojack, Warlords of the Old West, Ricky Martin, A Tribe Called Quest, and Evanescence.  The track packs expand these by genre, throwing in Electronica, Pop, Hip-Hop, (Less Talk) more Rock, and more. It’s enough to find a niche for just about any music fan.  That said, enjoy the horror show that happens when you throw down all voice tracks.

One of the things that blew me away about DropMix was its ability to drop in iconic tracks at wildly different tempos than the ones in which they were recorded, and somehow not end up with something that sounds like chipmunks or slow motion (other than the obvious all-voice example above).  The pitch and beat matching is, in a word, perfect.  When you’ve got something high speed like Sexy and I Know It going, and you drop in a slower track like Ms. Jackson, the game will shift the tempo of the whole board, letting the different musical aspects sync up and play well together.  Pitch matching lets tracks like All About That Bass from Meghan Trainor live in the same space as Chandelier from Sia, and somehow it all just works.  My only complaints are that the multi-colored Wild Cards tend to overtake the entire mix, and Down with the Sickness from Disturbed seems to be a bit of a combo breaker, but that’s fairly immaterial to the point stack anyway. It’s occasionally hilarious as some track combinations are just plain bizarre, but somehow it’s always fun.

The system, with 60 cards included, is $99.99 (though you can snap it up on Amazon for $64.99 right now), with addon packs of 16 cards split be genre (Electronica, Rock, Pop, etc.) available, as well as smaller 5-packs available.  The 16 card packs are $14.99, and the smaller packs ring in at $5.99.  That said, given that this system was a contender for toy of the year, it’s creating some artificial scarcity on the cards, driving prices a little wild.  Here’s to hoping that Harmonix and Hasbro work out the logistics to keep the music flowing.  Their big plans are already apparent as there are already over 300 cards available, with even more on the way for 2018.  The game’s longevity is inexorably tied to fresh cards for the mix, so let’s hope Hasbro does their part soon.

Part board game, part DJ simulator, and all Harmonix right down to the DNA, DropMix manages to make ever would-be music mixmaster sound awesome. While Hasbro has work to do on making the cards flow, DropMix brings the fire.

Ron Burke is the Editor in Chief for Gaming Trend. Currently living in Fort Worth, Texas, Ron is an old-school gamer who enjoys CRPGs, action/adventure, platformers, music games, and has recently gotten into tabletop gaming. Ron is also a fourth degree black belt, with a Master's rank in Matsumura Seito Shōrin-ryū, Moo Duk Kwan Tang Soo Do, Universal Tang Soo Do Alliance, and International Tang Soo Do Federation. He also holds ranks in several other styles in his search to be a well-rounded fighter. Ron has been married to Gaming Trend Editor, Laura Burke, for 21 years. They have three dogs - Pazuzu (Irish Terrier), Atë, and Calliope (both Australian Kelpie/Pit Bull mixes).
Related Articles: DropMix, Hardware, Let's Play, Tabletop
Share
Tweet
Share
Submit