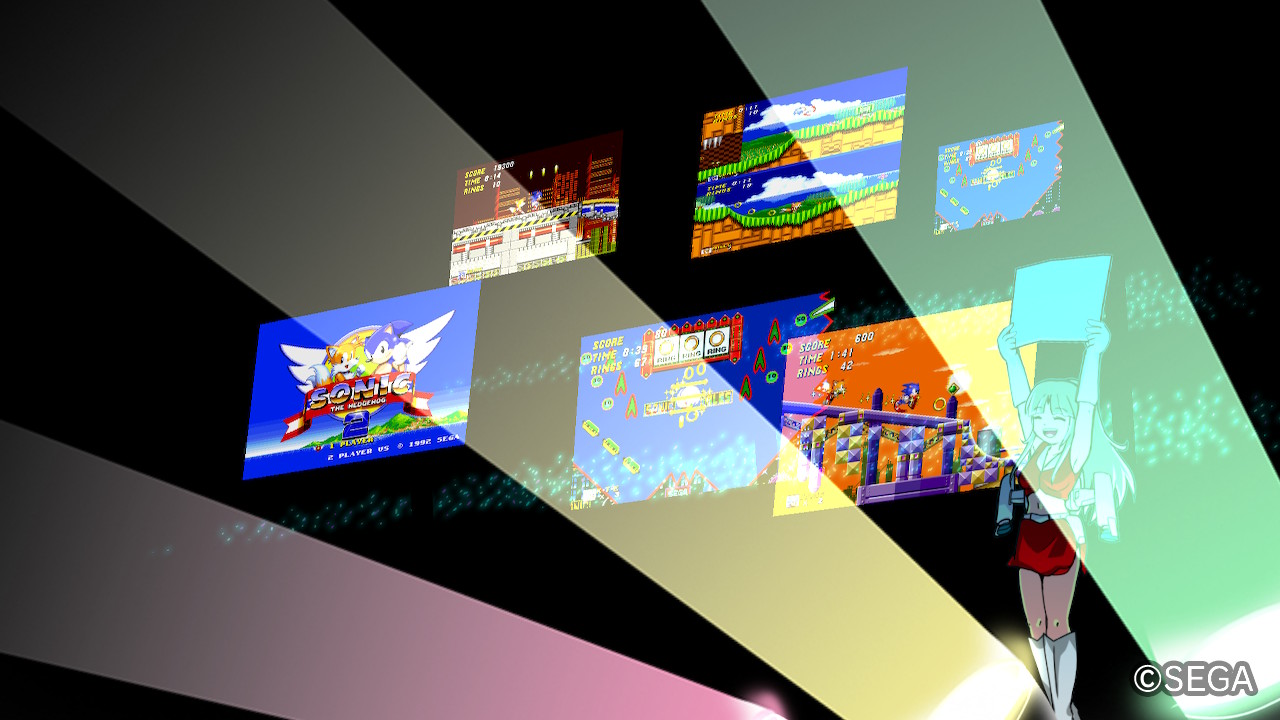 Sonic 2 is a game that defined my childhood. I used to play it all the time at a friend’s house, and later with my dad in one of the collections on gamecube. It’s my favorite out of the classic Sonic titles from nostalgia alone, even if now I can admit that 3 & Knuckles is an all around better game. I jumped at the chance to review a game so dear to my heart, and I’m happy to say that this is probably the best console version of the Genesis classic, with a few caveats.

In Sonic 2, Sonic and his best friend Tails (introduced in this game) discover that Dr. Eggman is once again hunting for the Chaos Emeralds, this time on West Side Island. Once he uncovers them all, he’ll use their power to build his ultimate weapon: the Death Egg. The two heroes set off to stop this diabolical plot, and rescue some woodland creatures along the way. The Sonic series has never been known for its plots, but I have to say here that the foreshadowing in the new manual to events in Sonic 3 & Knuckles is fairly impressive looking back. Sonic Team had been world building from the very first game building up to Sonic Adventure 1 and 2, and even if the stories of those games aren’t exactly great, I think it’s at least worthy of some praise. 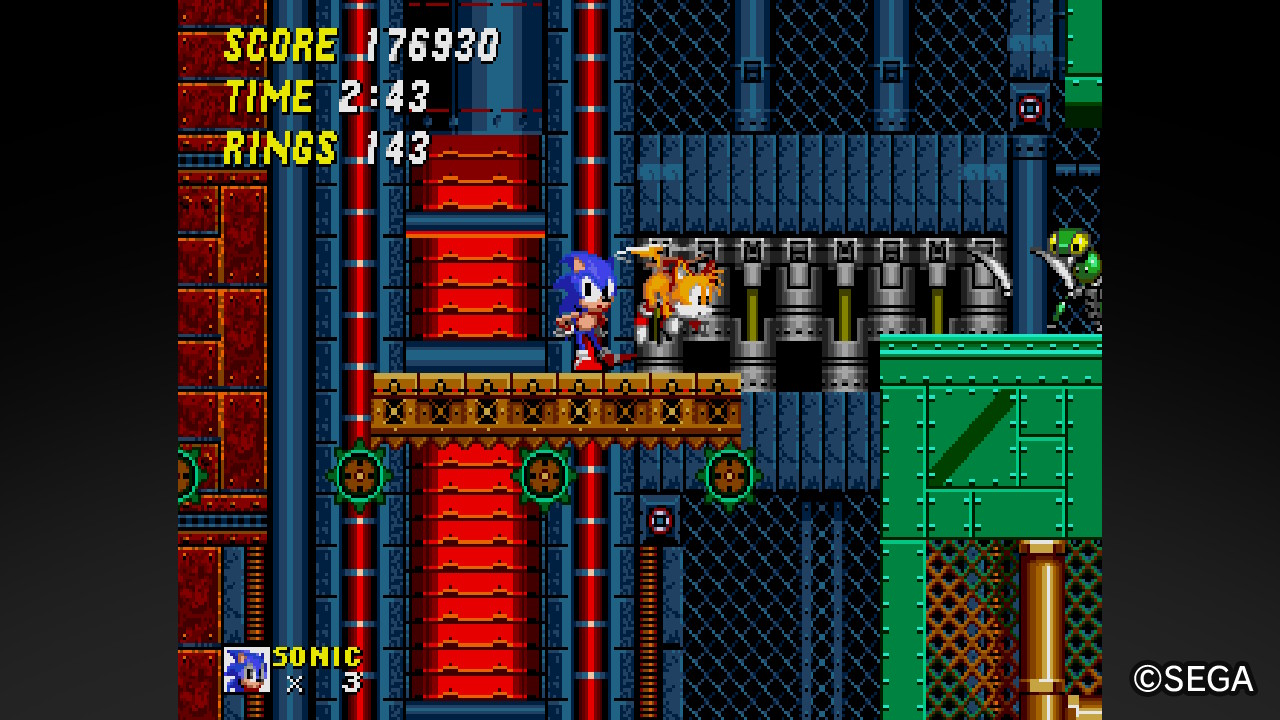 Like in other 2D Sonic games, you’ll speedily make your way through each zone while carefully managing tricky jumps, avoiding spike traps, and other obstacles. Most zones consist of two acts, the second of which ending with a battle against Dr. Eggman. The quality of these zones can vary in quality, for example Emerald Hill, Chemical Plant, and Casino Night can all be very fun to run through with many areas to reach your top speed, while Oil Ocean and Metropolis have tons of traps and cheap enemy placements that you can’t see coming. This brings us to the first oddity in this enhanced port: no widescreen support. You can stretch out the 4:9 image to fill the screen (which I find oddly nostalgic), but there is no option for true widescreen. The mobile ports have this feature, so why doesn’t this release? Hopefully this can be patched in later, but I doubt that will happen.

New to this edition of Sonic 2 are a few new modes and features. First off, you can save any time you want, which is a blessing in this modern age. Second, Sonic retains his Drop Dash ability from Sonic Mania, which feels great and is a natural fit with the layout of stages. Next are multiple screen filters and display modes to satisfy those who want a pixel perfect image, to recreate a CRT display, and anywhere in between. There are a lot of terrible looking filters in games out there, but the ones featured here all feel authentic and feel like they had a lot of work put into them, instead of just slapping some scanlines on the TV and calling it a day. 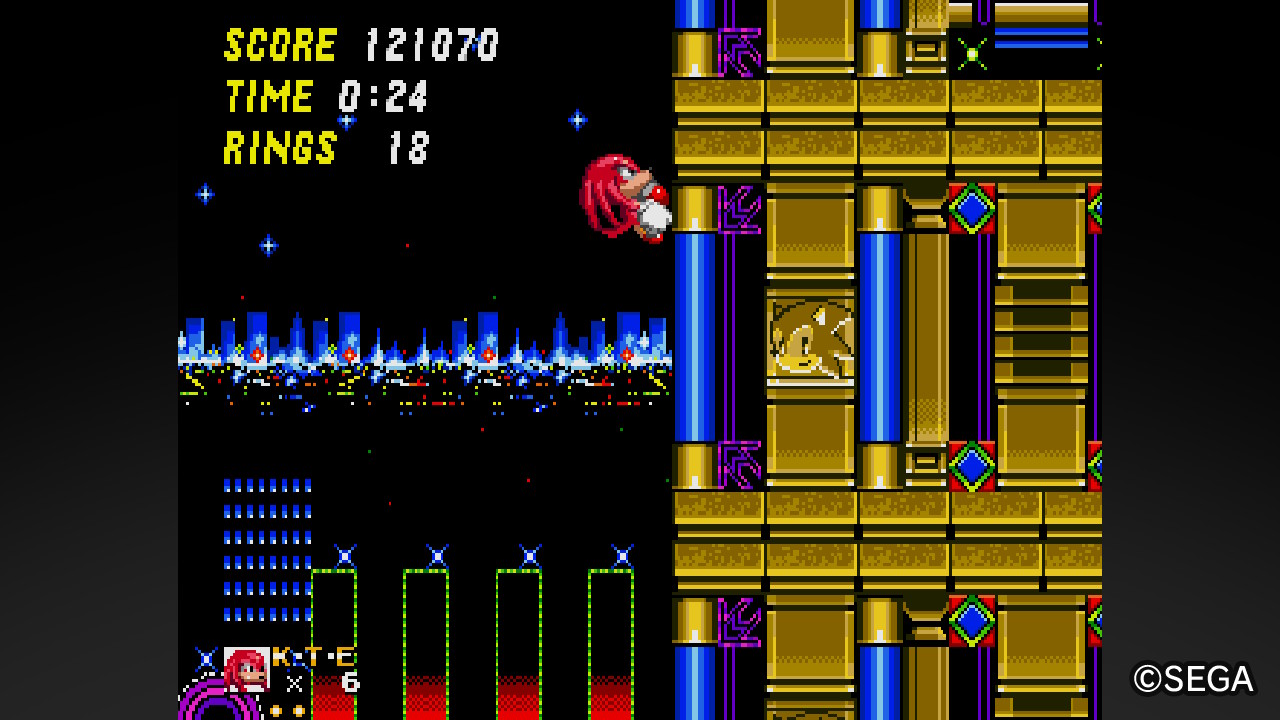 Finally, there are quite a few new modes to change up the core game a bit. Ring Keep mode, as its name suggests, allows you to keep half of your rings upon taking damage, and grants 10 rings at the start of each stage. It does feel a bit like cheating, but it’s nice to have if you want to run through the game quickly and it makes some of the annoying zones more bearable. After beating the main game once in either normal or Ring Keep mode, you unlock Super Sonic mode which gives you the ability to transform into your super form right at the beginning of the game, no chaos emeralds required. Just like the mobile ports, you can also do all of these things with Knuckles, who was introduced in Sonic 3. It’s very clear that these stages weren’t designed with his ability to glide and climb up walls in mind, but it’s a very welcome addition nonetheless. There is also a small challenge mode for both Sonic and Knuckles, which tasks you with going through the first stage as quickly as possible while collecting 100 rings. I didn’t find this final mode as engaging as the rest, but those who enjoy climbing online leaderboards will find something to satisfy that urge here in addition to the game now keeping track of how many rings you can collect without getting hit in a single playthrough.

This Sega Ages edition is a very polished package as well, menus look nice and clean, while still keeping that distinct Sonic style. There are multiple borders to fill the screen during gameplay if you hate black bars which retain this style. You can also access an online manual for the game, detailing the controls, features, and story. This edition includes both the Japanese and international releases, which is a nice touch even if I couldn’t tell the difference.

All in all, Sonic 2 is still a great game this time wrapped in a very nice package. The new modes make the game more accessible than ever, while still retaining the core Sonic experience. While there are some nice details, like being able to switch between versions of the game and the Sonic & Knuckles lock-on cart appearing when selecting the echidna's mode, the lack of widescreen support is very strange.

David is the kind of person to wear his heart on his sleeve. He can find positives in anything, like this is a person who loved Star Fox Zero to death. You’ll see him playing all kinds of games: AAAs, Indies, game jam games, games of all genres, and writing about them! Here. On this website. When not writing or playing games, you can find David making music, games, or enjoying a good book. David’s favorite games include NieR: Automata, Mother 3, and Gravity Rush.
Related Articles: Sega Ages Sonic the Hedgehog 2
Share
Tweet
Share
Submit