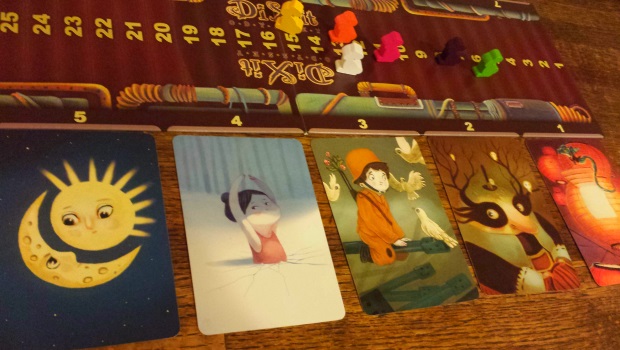 Dixit may be the only Spiel des Jahres winner named after a logical fallacy. The Latin phrase “ipse dixit” refers to the fallacious “argument from authority.” Out here in the real world, we accept an argument because of the evidence that supports it. We reject an argument if it defies reason. The so-called “authority” of the speaker should not sway us. Dixit does not take place in the real world. Facts and logic meander off into a contented quietude, and the authority of the Storyteller is all that we need to accept the most fanciful tales as true…

DIXIT ORIGINS is the 4th expansion for the 2010 Spiel des Jahres winner Dixit. The rules are simple. Each player has a hand of six exquisitely illustrated cards, each of them unique. The active player, called “The Storyteller,” secretly chooses a card and offers the other players a clue that evokes the image on the card. The clue may be a single word or a complete sentence. It may be a sound, a tune, or even a gesture. The other players then choose the card from their hand that they believe best matches the Storyteller’s clue. Finally, the players guess which card was the Storyteller’s inspiration.

Like most party games, Dixit does not have a theme per se. The image on each card might support any number of themes, limited only by the players’ imaginations. Some of the recurring motifs in DIXIT ORIGINS include anthropomorphic animals, yin/yang relationships, travel, elaborate hairstyles, and the juxtaposition of large and small elements. If Dixit has a theme, surely it must be “imagination.”

You get 84 oversized cards to add to your Dixit game. The box is bigger than it needs to be, but not big enough to hold another set of cards. The large Dixit stand-alone sets each include space for two expansions. If you have more than that, you will need another storage solution. If 84 cards doesn’t seem like much for $29, remember that you are paying for the effort that went into crafting the dazzling pictures.

Of the party games with the “choosing” mechanic, Dixit is the most creative. Apples to Apples (and its bigger, blacker cousin Cards Against Humanity) gives you a hand of cards with the answers already printed on them. After the chooser reads the category card, all you have to do is “fill in the blank” with the best choice. Dixit requires you to be imaginative. It encourages you to think laterally, draw upon metaphors, or reference shared experiences to communicate your clues to the other players. I believe this is why Dixit is one of the few party games that is popular with hobbyist gamers.

Dixit also sets itself apart from those other games by rewarding subtlety. You can win Apples to Apples or Cards Against Humanity by making the funniest, most obvious, or most outrageous choice. You earn no points in Dixit for being too obvious, and being too obscure is just as bad. If everybody guesses the Storyteller’s card, or if no one does, the Storyteller earns no points. The Storyteller only scores points if some, but not all, of the other players guess the correct card. Your clues must be vague, but not too vague, for your audience.

Let’s say I’m the Storyteller, and I decide to play the card with the crows on the metal grid. It reminds me of Alfred Hitchcock’s movie “The Birds” so I offer “Hitchcock” as my clue. I’m playing with a younger crowd who weren’t around when Hitchcock was alive, but I’m gambling that some of them know who he is. Some of them may have seen the film, or at least heard of it. When the other players hear the clue, they might try to find cards in their hands that remind them of Hitchcock films. Perhaps they will choose images that evoke suspense, or that look like the scene of a crime.

Compared to the other sets of Dixit cards, the art in DIXIT ORIGINS is a breath of fresh air. Marie Cardouat was the artist for the original game and the first two expansions. She set the tone for the series with her dreamlike illustrations. The most recent expansion, Dixit Journey, represented a radical departure by introducing the work Xavier Collette. Collette’s drawings feature greater depth, more distinct shading, and sharper lines than Cardouat’s gauzy images. Collette’s cards were almost too modern looking to blend in with Cardouat’s style.

Clément Lefevre’s paintings in DIXIT ORIGINS look like a deliberate attempt to bridge the gap between the two styles. Lefevre’s style splits the difference between Cardouat’s classic style and Collette’s modern sensibility. The cards in DIXIT ORIGINS are not only beautiful when judged on their own merits, they allow the art in Dixit Journey to blend harmoniously with the cards in the earlier sets.

The only fault I find with the art in DIXIT ORIGINS is that the art covers a narrower emotional spectrum than previous sets. Cardouat’s art in the first three sets ran the gamut from sweet and charming to unsettling, even disturbing. Many of her images were ambiguous, allowing for a broad range of interpretations. Lefevre’s images in DIXIT ORIGINS are more straightforward. He is not content to simply be charming – he insists on being silly and whimsical, with fewer unpleasant images in this set. It is almost as if the designer of DIXIT ORIGINS intends to give children pleasant dreams rather than nightmares. I don’t approve of this – children (of all ages!) shouldn’t be afraid to deal with disagreeable thoughts.

I’ve played DIXIT ORIGINS with groups of close friends and with a roomful of strangers. The experience is markedly different. When playing with friends, we can rely on in-jokes that we’ve shared for years. Knowing each other’s favorite books and recent vacations allow us to craft the perfect clue: the one that only ONE other player will recognize.

When playing with acquaintances, I face a different set of challenges. Because I don’t know them well, I have to guess what subcultures they identify with or what cultural references will resonate with them. It breaks my heart (just a little) when I play with a roomful of self-identified geeks who don’t know what I mean when I offer “the eleventh Doctor” as a clue.

Since DIXIT ORIGINS is an expansion, you should only get it if you already have the base game or one of the stand-alone expansions, Dixit Journey or Dixit Odyssey. Without one of those, you won’t have the voting tokens, scoring track, or rulebook.

I recommend this expansion for anyone who plays Dixit often and starts to find their cards getting stale. With a game like this, more is always better. You will be able to play longer games, or with more players, without seeing repeats.

If you are deciding between DIXIT ORIGINS and one of the other expansions, the choice is up to you. This review has photos of some of my favorite cards, and you will have to decide if you find the art appealing.

Bottom line: DIXIT: ORIGINS brings 84 morsels of dreamlike imagery to your Dixit game. Some are whimsical, some are unsettling, some are abstract, but all are evocative. The quality of Clément Lefevre's art is top notch, and demonstrates the longevity of this beloved series.