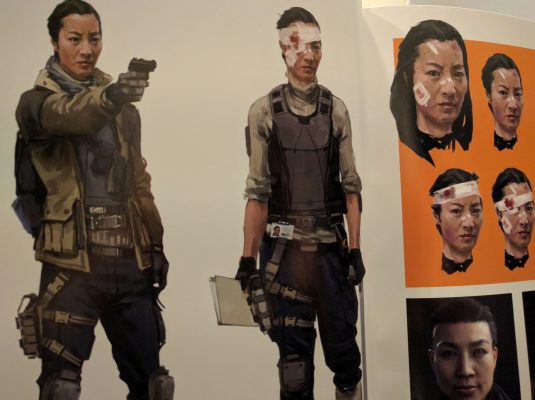 “Before there is a game, we must dream about the dream itself”

This forward, from Massive Entertainment’s Managing Director David Polfeldt, is a great way to open The Art of The Division. In it, he talks about how the creation of something like The Division is the exploration of both fantasy and reality. He talks about how imagery forms the base for their game, long before millions of lines of code are written, providing the framework to make their dreams come to life. It’s powerful sentiment, and it’s one shared among every artist, director, coder, and concept artist I’ve met over the last two decades. We are playing their dreams.

Titan Books has done a fantastic job collecting some of the most influential and powerful imagery associated with the construction of Ubisoft’s game, The Division. It’s a beautifully horrifying look at a society losing hope, a view into the hopeful broken soul of a battered New York.

One of the pieces of art I found the most interesting is the concepts for Faye Lau. Faye is a Division Agent who joins you on the helicopter ride out of a hot zone only to be wounded on her way back to the base. While the various approaches to her injuries show her evolution, the more interesting thing for me was who she resembles. It’s very clear that the art designs for Lau used the beautiful Michelle Yeoh as a reference. All of the reference sketches are clearly her, and it’s only until we see the final renders that we see her final look revealed. It makes you wonder if they approached Yeoh and couldn’t get her, or they just found her face matched the look they wanted for their character.

It’s very clear they had someone in mind for Agent Lau.

Ubisoft team Massive Entertainment had a very specific look in mind when they envisioned their agents. They spent a good bit of time designing all of the possible looks for the agents, including their backpacks, weaponry, and clothing. With a focus on a realistic look, they wanted their fighters to always remain grounded, never venturing too far into the futuristic or ridiculous. This is clearly depicted as the renders surpass the uncanny valley. Even if these renders were never used in the final product, it’s amazing what the art team had produced to set the tone.

The team focused hard on the look of the Agents.

Throughout the game are collectable ‘moments’ called ECHOs. These ECHO systems convey optional, but often compelling snippets of storyline about the ordinary citizens of New York. Maybe it’s a parent frantically scrambling to usher their kids to safety, or perhaps it’s a group of scared people backed into a corner by Cleaners. While they are displayed as orange dot scatters in the game, the concept art are more of a line art cartoon style. The style conveys the same impact, but it does it in a way that reminded me of Rafael Albuquerque’s thick, outlined approach to his artwork. It’s amazing how well it conveys the same impact in such a drastically different way.

The ECHOs once had a very different look.

Unlike many games, the team at Ubisoft had to preserve a sense of recognizable realism in The Division. New York City is filled with landmarks that millions recognize at a glance. Places like Madison Square Garden, Grand Central Station, and obviously the Statue of Liberty. Even these iconic locations have suffered under the strain of this viral attack. The Art of the Division showcases this decline, striking a balance between the familiar and the devastation and decline. It creates a fantastic juxtaposition of the ice and slow-laden street, abbutted by the bright yellow biohazard banners marking the Dark Zone.

The Joint Task Force has an impossible task of trying to restore basic services, law, and order to the city. As a contingency, they’ve set up a forward Base of Operations in a large Post Office. Retrofitting the inside, they built out wings devoted to medical help, security, and technology research. In the game, each wing can be upgraded three times as you solve missions and find key resources. The book shows how the would-be residents turn the place from something necessary into a place that could be described as downright useful.

An example of base progression.

Polar opposite of progress is the Dark Zone. Abandoned by nearly everyone, the Dark Zone is a fully quarantined area that are so contaminated that they are beyond hope. Inside is a walled garden of garbage and destruction, but it’s also the place least looted. Due to the danger, few venture into this area, and those who do are usually well armed and filled with dreadful purpose. It’s in this area that you’ll encounter the player versus player aspects of the game. While the game portrays the Dark Zone very similarly to the rest of New York, The Art of the Division showcases just how dark they intended it to be. A hanged man swings inside of a walkway arch, bodies lie wrapped and stacked like so much wood. It looks dangerous and filled with death. It’s unfortunate that this isn’t conveyed as clearly in the final product.

A grim reminder of what’s at stake.

At 192 pages, The Art of the Division is chock full of content. Advertising you might expect on the streets of New York, graffiti, darkened and barricaded buildings, and well-lit hopeful JTF checkpoints are all hand-drawn in exquisite detail. The before and after sequences, showcasing how weather or the virus has destroyed this proud city are some of the best pieces of art on display. It’s the fully-rendered pictures that caught my eye most of all, however. They are some of the best artwork I’ve seen in any videogame art book, some being nearly indistinguishable from the real thing.

Exquisite detail in these renders.

If there’s one thing I was surprised about in this book, it’s how little space they spent on the Dark Zone. As central as it is to the narrative of the game, only a handful of pages are devoted to it. I’m not sure if it’s due to the desire to avoid spoilers, or a choice around number of pages in the book, but that section just feels unfortunately light.

The Art of The Division

A deep look into the art and process behind Ubisoft’s game, The Art of The Division showcases all of the moving pieces behind the curtain. Landmarks, looters, weapons, and more, every aspect is covered in loving detail. The section on Echos is an eye-opening look at the original concept, I just wish they spent more time on the all-important Dark Zone. That said, I’m happy to have shared in this dream -- it’s a worthwhile addition for any Division fan.

Ron Burke is the Editor in Chief for Gaming Trend. Currently living in Fort Worth, Texas, Ron is an old-school gamer who enjoys CRPGs, action/adventure, platformers, music games, and has recently gotten into tabletop gaming. Ron is also a fourth degree black belt, with a Master's rank in Matsumura Seito Shōrin-ryū, Moo Duk Kwan Tang Soo Do, Universal Tang Soo Do Alliance, and International Tang Soo Do Federation. He also holds ranks in several other styles in his search to be a well-rounded fighter. Ron has been married to Gaming Trend Editor, Laura Burke, for 21 years. They have three dogs - Pazuzu (Irish Terrier), Atë, and Calliope (both Australian Kelpie/Pit Bull mixes).
Related Articles: The Art of The Division
Share
Tweet
Share
Submit