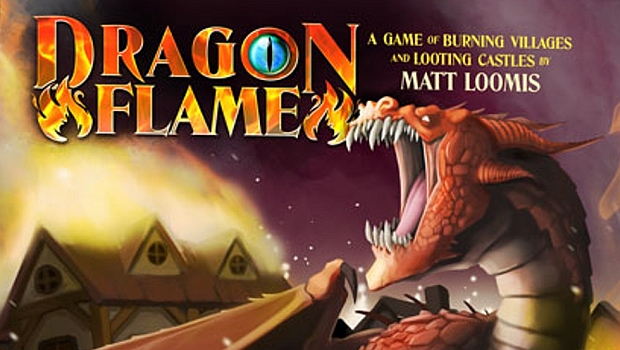 You are a DRAGON! That’s the premise for Dragon Flame, a newly released card game courtesy of Kickstarter and Minion Games. Your dragon is as uncomplicated as any other, motivated by precious metals and gems, and by pretty little female humans – every dragon needs a pet! Use your fiery breath to scorch hamlets and castles while collecting treasure and princesses. It’s about time dragons get their day.

Two to five players take flight, competing for gold chests and fair maidens, all of which contributes to Glory Points at the end of the game. The single-fold rule sheet is overly concise. It will take a couple reads and maybe a playthrough or two to grasp the mechanics. Depending on how many dragons are blazing the countryside, some cards may be culled, streamlining play.

Castle cards are placed in a row in the middle of the table, providing the landscape for looting treasures. Then players each receive three cards from the main deck. The main deck contains not only chests of gold, piles of gems, banners, statues, relics, and nervous princesses, but also curses and knights. All of these cards count for or against your score.

There are also dragonflame cards, which allow you to lay waste to one of the unsuspecting villages arrayed in the center of the table. Burning villages is not only fun, it’s worth points at the end, based on who did the most damage. A village must be totally razed for the points to count, so players are incentivized to finish the job while competing for the most destruction.

It’s not as simple as declaring which village is going to be consumed by your hellfire. The principle mechanic involves players taking turns placing their main deck cards onto the castles, and then, in turn, picking a pile for their own. I really like how this works. When placing cards, some will be laid face up, and other face down. This means that many of the cards in the castle horde are known only to the player that placed them. Depending on turn order, a player may be able to load a castle full of cards from his own hand, and then pick that pile for his own. This may be a good tactic if you have a lot of useful or valuable cards in your hand at the beginning of the turn, but chances are one or more of those cards will either not help or actually count against you at the end.

Treasure chests are only worth points if you have all the same type of chests, such as Stash of Silver Pieces, or Cache of Dwarven Gold. Other chests are worth negative points at the end of the game. Relics are special items which allow players to affect the turn. Examples of relic powers are the Tome of Fire, which forces another player to swap flame tokens on a village, and the Wand of Indecision, which makes another player choose a different castle to loot. Curses and Knights are worth negative glory points.

The game ends when the main deck is exhausted, and the player with the most glory points wins.

This is a light-weight game that can be played in thirty minutes, and could be a decent filler game for hobbyists. Outwitting your rivals with clever play of curse or knight cards is the real fun and may be enhanced with your favorite adult beverages. Younger players might also really enjoy this game. There is just enough depth to the mechanic and color around the theme to make this a worthwhile purchase.

Decent filler for hobbyists and a good game for young players. There is just enough depth to the mechanic and color around the theme to make this a worthwhile purchase.

Mike is a journeyman musician, writer and amateur astronomer who makes a living as a data engineer in Port Angeles, WA. Mike is also a hopelessly obsessed but very marginal player of Magic: the Gathering.
Related Articles: Dragonflame, Tabletop
Share
Tweet
Share
Submit