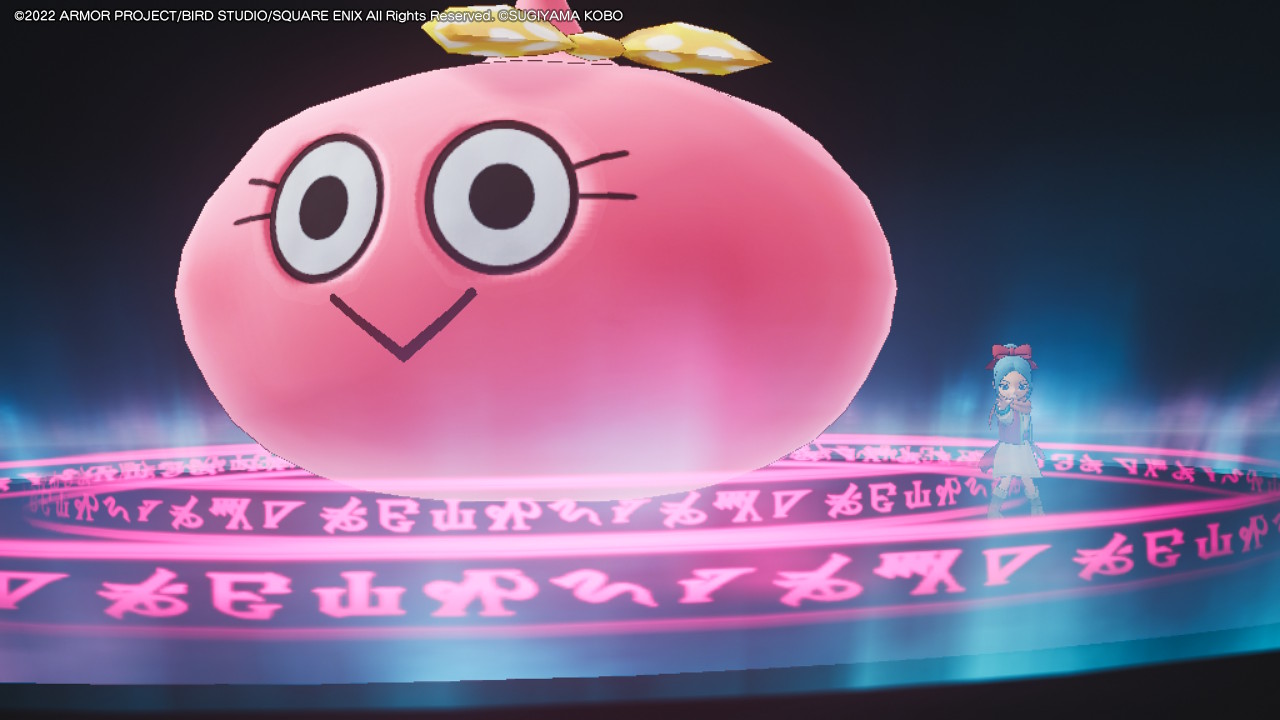 Dragon Quest has been going strong since 1986, and essentially invented the turn-based JRPG. It’s nowhere near as popular in the west as it is in the east, yet the latest mainline entry Dragon Quest XI sold decently well. It’s traditional almost to a fault, but that’s part of what makes the games so charming, along with copious amounts of puns of course. The various spinoffs tend to take a much different approach, which is where Dragon Quest Treasures comes in.

Dragon Quest Treasures is a prequel to XI, following Erik and Mia who are enslaved aboard a Viking Longship. When the crew capture two mysterious creatures, the siblings set them free and sneak off in search of treasure. After finding a pair of magic daggers, they are whisked off to the world of Draconia, a set of floating islands made of long-dead dragons. The magical creatures teleported them here to help them find the Seven Dragon Stones, which will reveal the greatest treasure of all once brought together. Mia and Erik lead a gang of treasure hunters all across the islands to find the Dragon Stones, recruit new allies, and amass wealth.

A global treasure hunt with two thieves sounds like a fun adventure, right? Well, it doesn’t work out that way sadly. After the brief intro, you’re essentially left on your own to complete the various main quests that eventually lead to the ending. The gameplay loop goes a little something like this: you choose one of six open zone islands to explore, find buried treasure by solving randomly generated perspective puzzles, then head back to base to drop off your loot. It sounds decent on paper, but in practice, it becomes extremely tedious and dull.

Playing as Erik or Mia (I went with Mia most of the adventure because of her fate come DQXI), you have a few moves at your disposal. You can do a melee combo by mashing Y, dodge by tapping X, heal yourself by holding X, jump with B, sneak by pressing in the left stick, and aim and shoot pellets that can damage foes and heal allies with ZR. While your dagger can deal quick damage on its own, most of the fighting will be done by your recruitable monster pals. After beating a monster senseless, there’s a chance that they will apply to join your gang (which is a very funny concept), and you can then give them materials to recruit them. 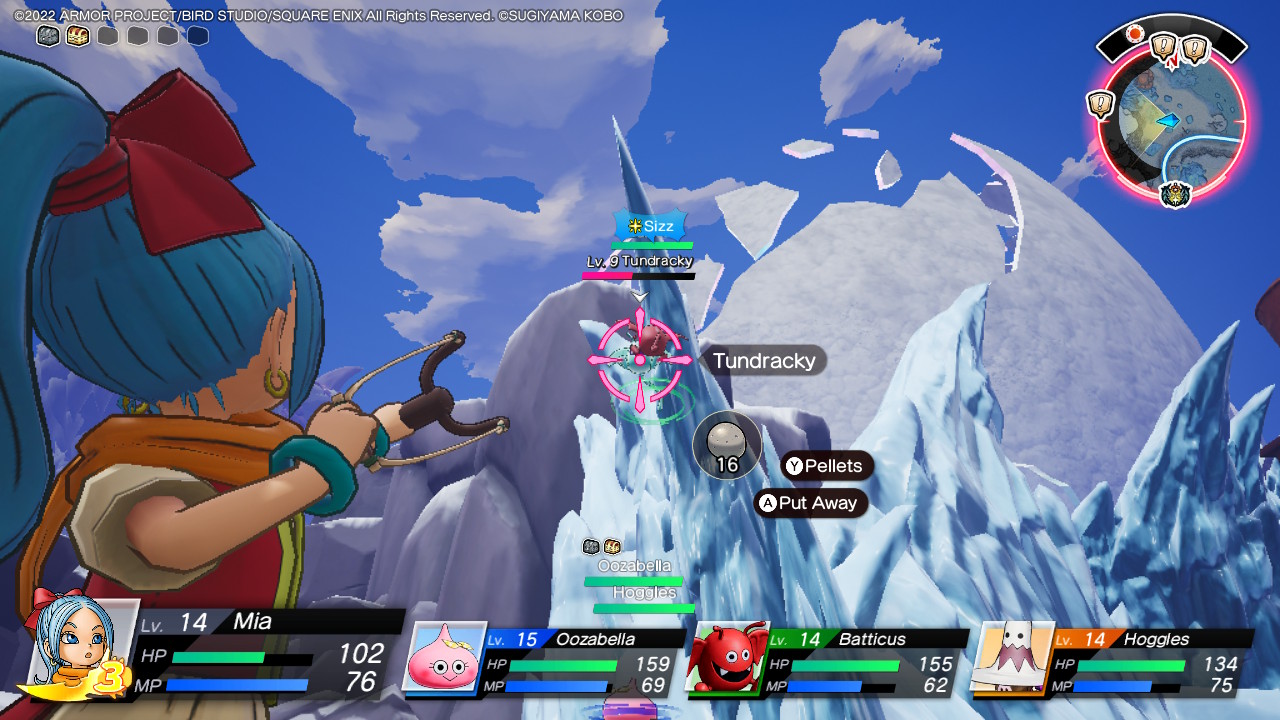 Monsters will fight on their own, utilizing abilities, magic, and normal attacks. This isn’t a Dragon Quest Monsters game, so you really don’t have much control over them aside from two commands (Go and Regroup) and equipable medals that change stats very slightly. Their AI isn’t very smart either, with some party members simply staring off into space for entire encounters, so you’ll be relying on your very stiff-feeling combo for the most part.

Your party also comes with abilities for traversal and treasure hunting, such as a glide or riding a monster’s back to get around quicker. These are called Fortes, and while you don’t necessarily need them to get around they certainly help with the tedium of walking from one place to another. Erik and Mia’s Forte will point you in the direction of the nearest buried treasure. Once you’re close enough, scanning again will reveal images showing where the treasure is from your monsters’ point of view. You then need to interpret these somewhat distorted images, such as a monster that is low to the ground or has some visual effect on their picture, to dig up the treasure by holding A for just a little too long. 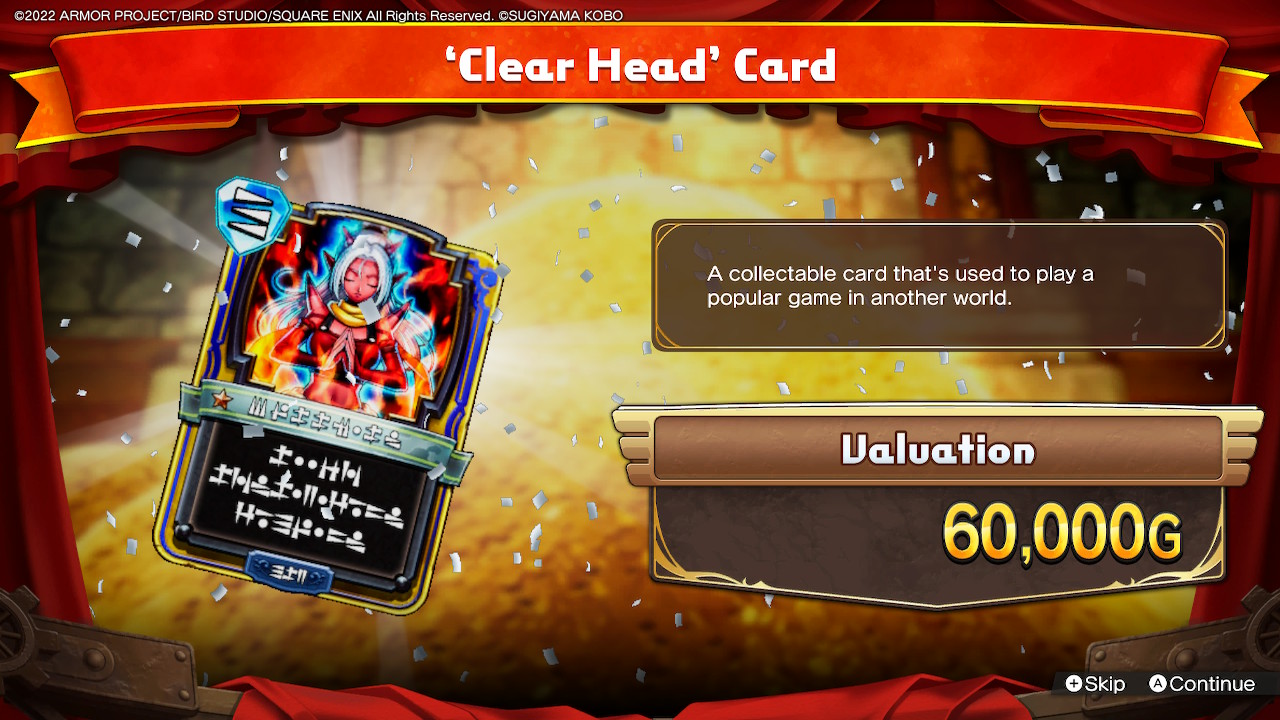 If you couldn’t tell, I didn’t find this mechanic to be particularly fun, but it’s what you’ll be doing for most of the adventure. There are several quest lines you can discover that may add some extra steps like examining a stone monument for the next quest marker to appear, but it always comes back to these perspective puzzles; including the main quest. You’d think the Dragon Stones would be guarded by ferocious beasts since just about every other gang is after them, but no. Most of them are just lying around somewhere in the world, one of them I literally purchased from a shop in the most underwhelming ‘adventure’ of the year. That’s the core problem of DQ Treasures: it feels like doing chores.

There’s no sense of wonder or adventure to be found here, even the luster of getting tons of treasure to make my gang the Gyldragons’ big number go up wears off quickly since that number doesn’t actually do anything. You can’t spend the money you get from treasure, your wallet is an entirely separate entity. Instead, how much your hoard is worth simply increases your gang’s rank which allows you to recruit more total monsters and gates progression. The treasure hunting, combat, and story all just feel so empty and lifeless, the charm of the series actually becomes somewhat grating. I adore puns, but having my party constantly spouting the same ones over and over became incredibly annoying. I simultaneously felt like the only one doing anything and the most useless participant in a fight, and don’t even get me started on the music. 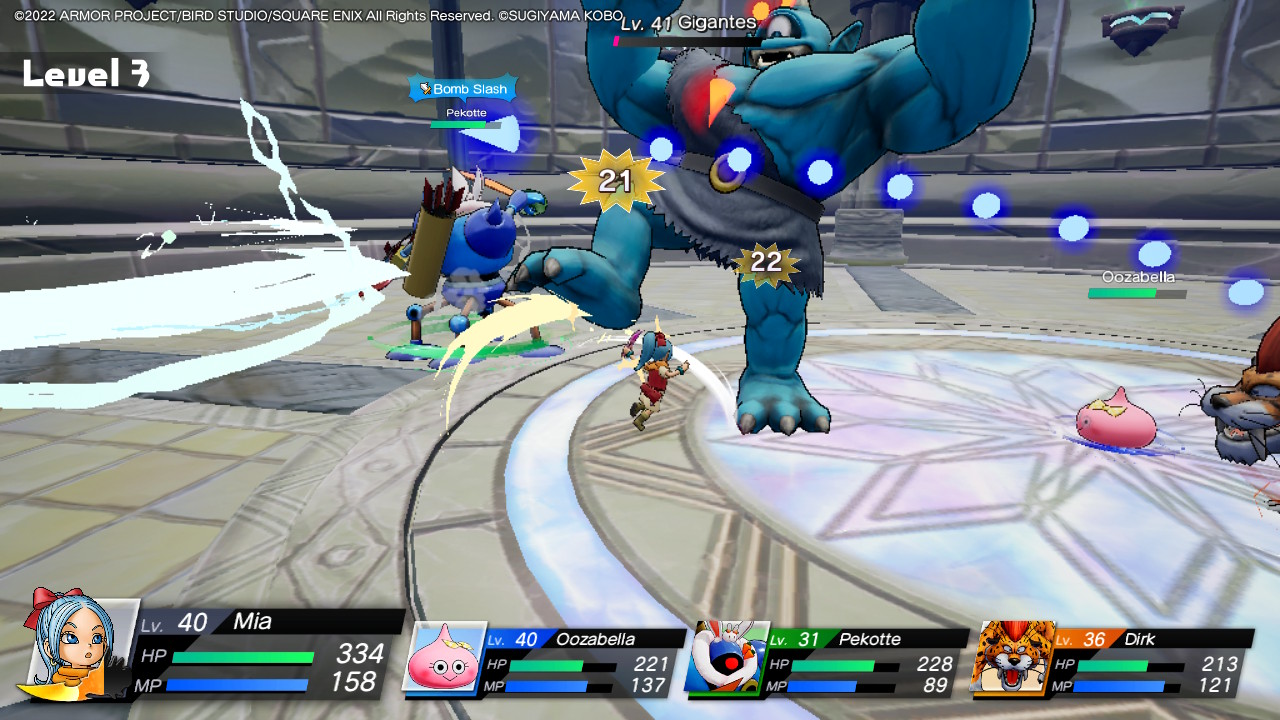 Koichi Sugiyama passed last year, and on top of being a terrible, war crime denying person, his compositions had taken a nosedive in terms of quality since the release of Dragon Quest XI. While the enhanced version of that game was allowed to use orchestral versions of each tune, somewhat alleviating the pain of the terrible overworld and battle themes, but Treasures is back to an entirely MIDI soundtrack. On top of that, there wasn’t an original song to be found as far as I can tell, the ost is composed entirely of music from previous titles whether they fit or not. I firmly believe moving on from his compositions is the best thing for the franchise.

Treasures has many nods to previous titles, and to be fair most do work better than the music. All of the treasures you find are references to other games, such as equipment, key items, or statues of certain characters (including a very depressing one depicting the scorch marks of Pankraz after he was killed early on in 5…). While this won’t be a problem for Japanese audiences, the majority of the non-equipment treasures seem to be referencing Dragon Quest X, the Japan-exclusive MMO which is still going strong in the east today, and other non-localized titles. As someone who loves Dragon Quest enough to play up through the first expansion of X despite not understanding any of the text, I can’t help but feel like this is a slap in the face for western fans. I didn’t feel much when appraising what I had found in the field, but I certainly felt disappointed when many were revealed to be from a game that is, according to Square Enix, not for me.

Dragon Quest Treasures is a bland adventure that sucks out everything that makes the franchise charming. There’s quite a lot to do in the game, but none of it is fun or feels good. Playing this game feels more like checking things off your to-do list: the act of crossing things off may offer a hint of satisfaction, but you don’t actually like doing the tasks on it.

David is the kind of person to wear his heart on his sleeve. He can find positives in anything, like this is a person who loved Star Fox Zero to death. You’ll see him playing all kinds of games: AAAs, Indies, game jam games, games of all genres, and writing about them! Here. On this website. When not writing or playing games, you can find David making music, games, or enjoying a good book. David’s favorite games include NieR: Automata, Mother 3, and Gravity Rush.
Related Articles: Dragon Quest Treasures
Share
Tweet
Share
Submit