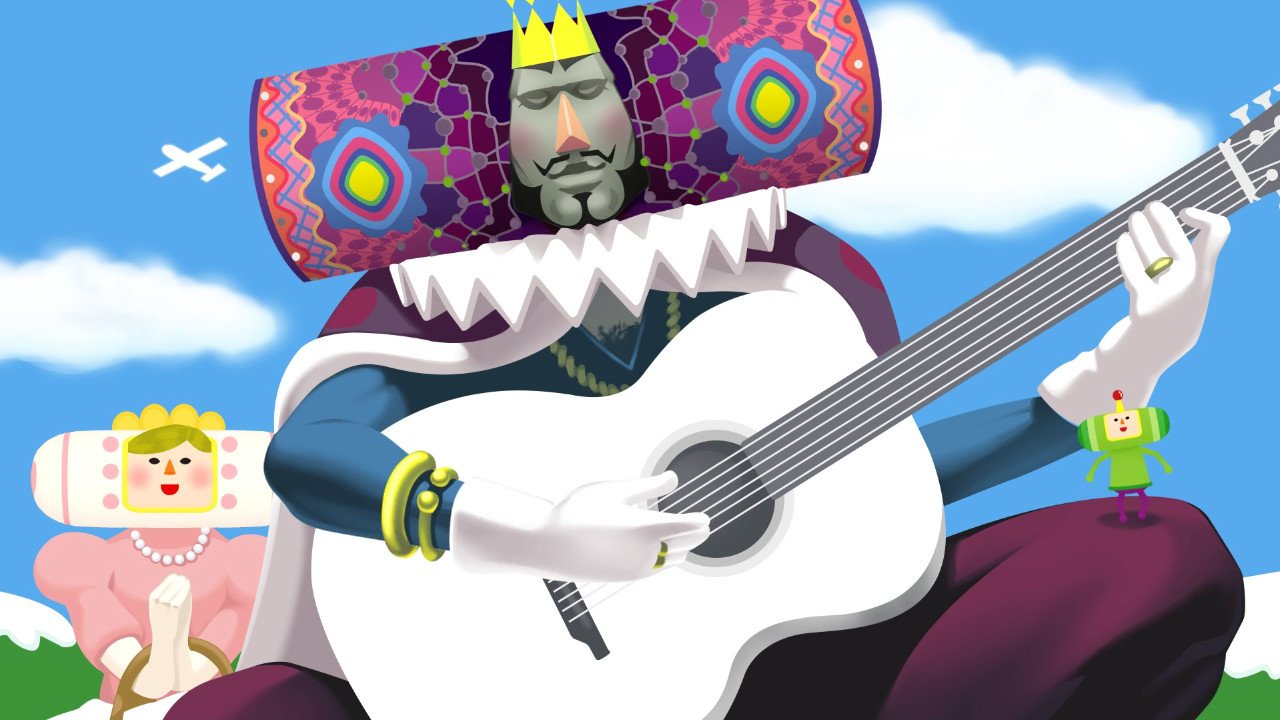 This may sound hyperbolic, but the Katamari Damacy series has shaped who I am as a gamer. Its quirky Japanese charm mixed with infectiously happy music and its simple yet unique control scheme stuck with me during my middle school years. I’ve always had a soft spot for the first two games in the franchise way back on the PlayStation 2. While it’s been more than a decade since the first game was released, Bandai Namco decided to give the first game another shot, releasing it as Katamari Damacy Reroll for the Nintendo Switch. While seemingly a straight port in terms of content, there’s enough changes to the game that make this another smash hit (fittingly too, as it was released the same day as Super Smash Bros. Ultimate).

Katamari Damacy Reroll once again puts you in the role of the Prince of All Cosmos, the miniscule son of the King of All Cosmos. After an accident causes the King to destroy all the stars in the sky (a bit ambiguous in the American version, though he was implied to be drunk), he orders you to rebuild the stars in the sky. How do you do this, you might ask? By rolling a ball up and murdering plenty of innocent animals and humans, of course!

Oh sure, King of all Cosmos. Naughty is the right word, ain’t it.

Well, it’s a little softer than that: You roll the eponymous katamari and consume items that are smaller than you are, thus sticking it to your ball of stuff and making it larger. While you’re initially centimeters large, you’ll eventually grow big enough to consume people, buildings and even land formations. Granted, each stage gives you a little bit of the action so you can go from cleaning up around a house to scooping up cars around the world. You also have to be careful not to lose items in your katamari when bumping into larger items, as doing so can cause you to spin out of control and fling parts of your katamari away.

While it does sound simple in theory… it’s actually pretty simple in practice too. Control-wise, you’ll mainly use both analog sticks in order to move your katamari around. While it might take a bit time to get used coordinating your movements (moving your sticks in different directions means you’ll turn rather than advance forward or move backwards), the game is simple enough that literally anyone can get into the rolling mood pretty quickly. This accessible control scheme made the game an instant classic for me back in its original release, and I’ve highly recommended it to my friends and family that don’t normally play video games. I did play mostly with a Pro Controller (which has a different analog stick layout compared to the PlayStation 2 controller), but Joy-Con use in handheld and docked mode work fine as well.

A new feature that Reroll provides is that it includes a simple control scheme (where you only need to use the left analog stick to move, with some right analog stick actions as well) and a gyro scheme that utilizes motion controls. The latter scheme is something with which I have a minor sticking point, as it’s a bit too inaccurate to move precisely; the Wii waggle era comes to mind. You have to hold the Joy-Con controllers a bit unnaturally and while charging up to gain a burst of speed is easier than alternating the analog sticks, advancing and moving backwards can be a bit of a pain. I appreciate the accessibility that the simple control scheme provides, but the gyro setup feels a little half-baked.

That being said, the rest of the game remains as classic as I remembered it 14 years back. The blocky aesthetic has proven to be timeless, and the overhauled graphical engine of Reroll makes the game pop out with bright colors and smoother edges. The Switch’s processing power means that the game runs smoothly in both handheld and docked mode. The graphical style didn’t rely on bleeding-edge performance to stand out, and it shows. That isn’t a bad thing, however, as the brightly colored style has this uniqueness to it; even the King of All Cosmos is dressed in this flamboyant style that works well with a coat of HD paint. In addition, you get short little cutscenes featuring the human Hoshino family as the son is subjected to the wacky hijinks that are going around, much to his family’s obliviousness. They’re all reverted to the original Japanese subbed version, which is a shame because the English dub had a “so bad it’s good” quality that I thought fit well.

Speaking of which, the soundtrack and sound design are as gorgeous as always. All of the songs are memorable and iconic, from the title track Katamari on the Rocks to the jazzy ballad Que Sera Sera to the erratic and fast-paced Katamari Mambo. Each of these songs are a total blast to listen to, and it’s apparent that a lot of love went in composing the wacky and cheerful music within the game. The sounds themselves, while subtle, actually contribute a lot to the experience. Whether you’re bumping into a wall, listening for a cue to see if a thing is approaching you or running away, or even hearing the shrieks of humans, Katamari’s audio has a lighthearted charm, which elevates the whole experience.

Most missions will task you with rolling up a katamari to a predetermined size before a set time limit, but there are others based on the Zodiac constellations where you’ll have to collect a certain type of item: Cgynus has swans, Gemini has twins, Cancer has… crabs, the whole shebang. While there are only three “unique” world types, each stage does its best to differentiate from the others. The aforementioned Cancer stage is just the house layout, but it’s littered with crabs to collect. The game goes out of its way to make sure that each stage is a fun little treat, and will switch up item layouts and obstacles, which adds a ton of replay value.

While the main stages are of the size mission type, you’ll also be timed with how fast you get your katamari to the required size, with a few literal cosmetic achievements getting unlocked should you be speedy. You’d think that the game would be stale after a while, but Katamari Damacy Reroll has enough content (you can breeze through this game in a few hours) to justify its replay value; you won’t be able to maximize your size if you don’t know item layouts, so you’ll need to practice to get a high scoring katamari. That, and the missions near the end of the game range from addictively fun (mainly the last stage where you have to make the moon) to perplexingly frustrating (specifically the missions where you have to roll up the largest cow and bear in the area, which will necessitate a few retries should you mess up). Later on, you can also unlock the ability to play endless versions of the three main layouts, which acts as more of a zen experience for those who don’t want to be timed. Katamari Damacy Reroll keeps the base experience intact, and simply put, it’s a fun ride.

With all this glowing praise in regards to the remaster, the biggest flaw with Reroll is how it doesn’t really add anything new in terms of content. This is rather jarring as there is a multiplayer option, but it’s a tacked-on addition to the rest of the package (at least the Prince’s cousins are cute). It would have been cool to incorporate a few references to the next games in the series, or even an entire Switch-exclusive mission. As it stands, however, the rest of the game is solid.

Katamari Damacy Reroll is as simple, silly, and superbly entertaining as it was more than a decade ago. The main experience stays intact, but the remaster does enough to make anyone interested in this game smile. Here’s hoping that Bandai Namco takes this reimagining and invests in the original sequel next.

Elisha Deogracias is an aspiring accountant by day, freelance writer by night. Before writing for Gaming Trend, he had a small gig on the now defunct Examiner. When not being a third wheel with his best friends on dates or yearning for some closure on Pushing Daisies, he's busy catching up on shonen manga and wacky rhythm games. Mains R.O.B. in Smash. Still doesn't know if he's a kid or a squid.
Related Articles: Katamari Damacy Reroll
Share
Tweet
Share
Submit