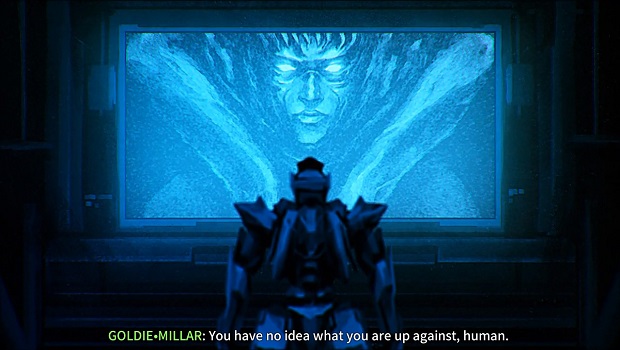 With all the talk about Nindies and other smaller games on the eShop, Rayark Games is the best example of a great indie developer for the Switch. With Voez, the company made a perfect port of the mobile rhythm game, removed IAPs, and created a complete experience that worked well on the Switch. Now, the company has released its action hack-and-slash game Implosion – Never Lose Hope, and it’s an excellent example of a polished console port in a sea of independent releases.

Implosion – Never Lose Hope puts you in the role of Jake, the protagonist who’s part of a team of people who come back to earth after humans flee from invading alien creatures known as XADA. With his trusty armor, known as Avalon, you’ll be responsible for rescuing survivors and plowing down a variety of mutated baddies through flashy attacks and maneuvers.

Before we begin, I’d like to commend Rayark for making the move from mobile quite smoothly. While the price of this version is $2 more than the original, you can really feel how the developer translated the controls and utilized the Switch’s technology. Gone are the touchscreen controls, instead opting for a scheme designed around the gamepad. The game is also fluid, and I hardly noticed any noticeable framerate drops at all. While the game performs exceptionally well, it does lack in the graphics department. It is wholly serviceable on handheld mode, but the spectacle loses its shine while docked. You still get the same great technical performance, but the graphics look a little rough around the edges. If lower quality graphics are the sacrifice to make for fluid gameplay, then I suppose it’s a necessary evil. That being said, there’s a ton of stuff to like here.

In an odd cross between X-Men Legends and Dynasty Warriors, you’re placed in an isometric perspective as you hack-and-slash your way through four chapters and dozens of levels of sci-fi intrigue. Attacks are mapped to two primary buttons (a light and strong attack), whilst holding R and pressing one of three face buttons will unleash a special attack if you have any (more on that later). The right stick controls a firearm, which you can swap by grabbing other weapons in caches during a level. It’s not all about mindlessly mashing the Y and X buttons, however, as enemies will get the drop on you if you don’t utilize your handy dodge maneuver. Pressing B up to three times, you can safely dash out of harm’s way before alternating attacks, but using all three in succession will leave you unable to dodge for a couple of seconds. Like some of the best hack-and-slash games out there, there’s a rhythm and pattern to each enemy, and later levels will punish you for thinking you can just press a few buttons aimlessly to win. If you do end up getting hit, you’ll lose some of your shield capacity (which replenishes itself over time); get hit again after your shield drops to zero, and you’ll start losing health. Get that to zero, and it’s game over man.

I adored the gameplay in Implosion, as it highlighted everything that makes hack-and-slash titles great. All the enemies are unique (requiring different patterns to destroy them rather than a catch-all strategy), and the later ones were satisfying to dispatch. Every hit mattered, and missing a precious few hits could spell out life or death (that is, if I neglected to dash out of the punishment). Boss battles peppered in between chapters punctuated this, and tested my mastery of the mechanics at hand. The difficulty is fairly challenging (especially on harder difficulties), but on normal and hard there are a generous amount of revives you can use if you want to just keep going with the story.

While mainly an action game, there are a lot of RPG elements to go around as well. Each level is scored based on time, damage taken, pre-determined conditions, and revives used in a level, with a maximum grade of S for performance. In addition to this, there are different achievements you can accomplish within each level, such as unlocking a secret room or completing a level without the use of firearms. Each of these achievements grant a badge which will help you unlock helpful items, most notably another character.

In addition to this, the main customization module is the ARK system, which grants you augmentations based on equipment you pick up from defeated enemies. You can purchase some modules using credits you earn from levels, and can look at how they’ll affect you before purchasing. They’re vital to preparation, as the right setup can grant you big bonuses like faster shield regeneration or more attack. These also grant you various special attacks depending on what you have equipped, so it’s always good to go back and see what you’ve unlocked before tackling the next stage. Enemies might drop advanced ARK modules too, so it does pay to go back to levels on a harder difficulty if you want the best loot.

While there are a of couple issues I have with the presentation, it’s solid for the most part. The story is easily the weakest thing about the game, as it has a generic space opera tone to it, and didn’t really grab me at the end. The voice acting is, for the most part, great; the main character Jake is the only one that has an inconsistent delivery, but the other crew complements him well. There’s a lot of voice acting too, and I enjoyed it more than I did the overall story. The level design works for this type of game, but the environments will tend to blur sometimes, and most levels in a given chapter are indistinct from one another.

What was a big surprise to Implosion was how much content fit in this $12 package. While I did complete the campaign on normal difficulty in a little under 6 hours, I couldn’t help but try and go back to the hard and expert difficulties, where the game will destroy you if you haven’t mastered the fundamental controls and equipped your best ARK modules yet. Luckily, your level and equipment carries over between difficulties, so you can go back and grind if you feel weak. The addition of the Crimson armor is superb (which can be unlocked by completing enough achievements), and aside from the pre-rendered cutscenes, there is special dialogue for each of the character’s stages. It helps that the voice actress for Diana (the pilot of the Crimson armor) is more consistent than Jake. Diana’s playstyle is vastly different, wielding a powerful staff that can pummel groups of enemies into next week.

Aside from the main story, you can unlock different missions after completing the main game which acts as an endless survival mode. These score attack levels have a VR aesthetic to them, and you’ll have to hurriedly dispose of mutants as you rack up higher scores and a multiplier (which can increase or decrease based on how much damage you deal and take). Other than that, you also unlock “Another Story”, which adds Jonathan (a character who is referenced in the main game as missing) to the mix. His playstyle is unique to the other two characters, as he’s maxed at the level cap of 30, can only dash once, and doesn’t have a shield to protect him. It’s a different experience that is ratcheted to the hard difficulty (since you only get three revives instead of the normal difficulty’s five), and enemies will change up their attack patterns on the fly. Still, these post-game levels provide some great replay value, and are worth the price of admission.

At $12, you can’t go wrong with Implosion. While it sometimes shows its mobile roots, the Switch version of the game is frantic, fluid fun with a great amount of content and thrilling gameplay. It’s games like these that make me never lose hope that Rayark will astound me again with its next release.

Elisha Deogracias is an aspiring accountant by day, freelance writer by night. Before writing for Gaming Trend, he had a small gig on the now defunct Examiner. When not being a third wheel with his best friends on dates or yearning for some closure on Pushing Daisies, he's busy catching up on shonen manga and wacky rhythm games. Mains R.O.B. in Smash. Still doesn't know if he's a kid or a squid.
Related Articles: Implosion - Never Lose Hope, Indies
Share
Tweet
Share
Submit