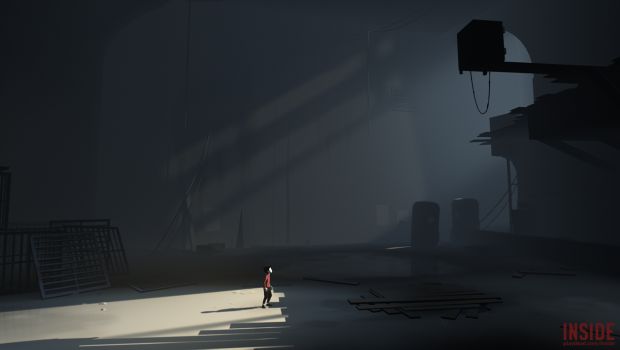 Silence is one of the most effective tools in a composer’s arsenal. It’s contrasting, empty, vacuumous — in the right hands, silence sings as loud as a full horns section. Inside follows in the footsteps of Limbo, as two great games that utilize “silence,” punctuating loud moments with slower, less intense segments. Knowing how to ramp up the tension, bringing the player closer to the edge of the flame and then whisking them away, on to the next portion.

Inside is a master class in many aspects of pacing and storytelling in games. It refuses exposition, preferring to show rather than tell; it asks questions, begs curiosity in a way that’s compelling more than confusing; and more than anything, it lingers, sitting in the back of your mind long after the short run time. It’s not grandiose, it’s not overblown or ostentatious. Inside is simply a good game, in the same style as the XBLA indie games that its spiritual predecessor, Limbo, led the charge for. In every way, Inside is wholly worth your time.

The crutch any and every review of this game will fall back on is, “it’s really good, don’t read more.” It might feel odd to repeat it again, but it’s true — if you enjoy Limbo, if you like indie games or stylistic storytelling, if you love games that make you think for a long time after beating them, Inside sates all of those needs and more.

Much of the impact of Inside hinges on these moments where your jaw drops, or your brain starts wandering, and you start asking questions of how, why, when, where. Nothing is given to you for framing the story of your protagonist, a nameless, faceless boy whose only goal is running to the right. Well, that’s not true, but again, “don’t read more.”

The world around you is crumbling. Men shine flashlights at you in the woods, and catch you if you’re not too careful. Dogs are let loose on you, and in the first minutes of Inside, you’ll find yourself sprinting through a forest, heart pounding as hounds gain on your every stride.

What elevates this even further is the beautiful art style. Crafted in the Unity engine, Inside looks like a painting in every frame, as objects move in and out of the foreground like a diorama. Colors are muted and dull in the industrial sections, while your protagonist’s red jacket serves as a constant reminder of his place on-screen, and a contrast to the machines and death surrounding him.

Sound design takes a similar cue, opting to only play music at the most grandiose points of your journey from A to far-flung B. Little raindrops, quiet chirps, pangs of feet on solid metal and the callback of their echoes in massive warehouses — so many cues and atmospheric notes are used to create the dystopian world around you that the game is hardly wanting or needing a soundtrack.

Beyond simple platforming, puzzles are the only barriers to progression. Most of them involve interacting with the environment in some manner, altering placements of objects or timing certain jumps to coincide with the movement of platforms. Again, to delve too deep into the mechanics would ruin certain revelations. Don’t read more.

In all honesty, my only hesitation in recommending Inside would be for people who don’t naturally gravitate to this sort of game. This isn’t a long game, and the only replay value comes in finding the hidden rooms and secret ending. The gameplay mechanics are simple, which is of benefit to the game, and the story is subtle and intriguing in the best ways.

But there are always those who want a perfect quotient of gameplay-to-value, who scoff at the idea of playing an experience that doesn’t last them X number of hours or provide Y number of features or modes. If you’re in that camp, it’s perfectly fine; this is just not your game, don’t read more.

For anyone who can’t help but ponder the themes of a game, who seeks discussion and loves to analyze, or if you’re looking for a moody, atmospheric experience that will last you an afternoon, this is it. Inside makes good on the legacy of its predecessor and then some, feeling reminiscent of Limbo and overcoming it in many ways. The ending segment alone will leave you silent, awestruck, and eager to chat. I look forward to the discussions this game creates, and the dialogues it might open, as this is a story that works so well, and could only be this effective in a game.

Inside is an incredible sophomore swing from Playdead, as the atmosphere, aesthetic and gameplay meld into one glorious experience that demands attention. Don’t read about it, don’t seek more, don’t ask questions -- just clear your afternoon schedule and experience it.

I'm a Texas native and graduate of Texas Tech University, freelancing in the gaming journalism industry. I love games, live music, Texas BBQ and sports. Favorite games are The Witcher 2, anything from Bioware, the Kingdom Hearts series and Dota 2.
Related Articles: Inside
Share
Tweet
Share
Submit