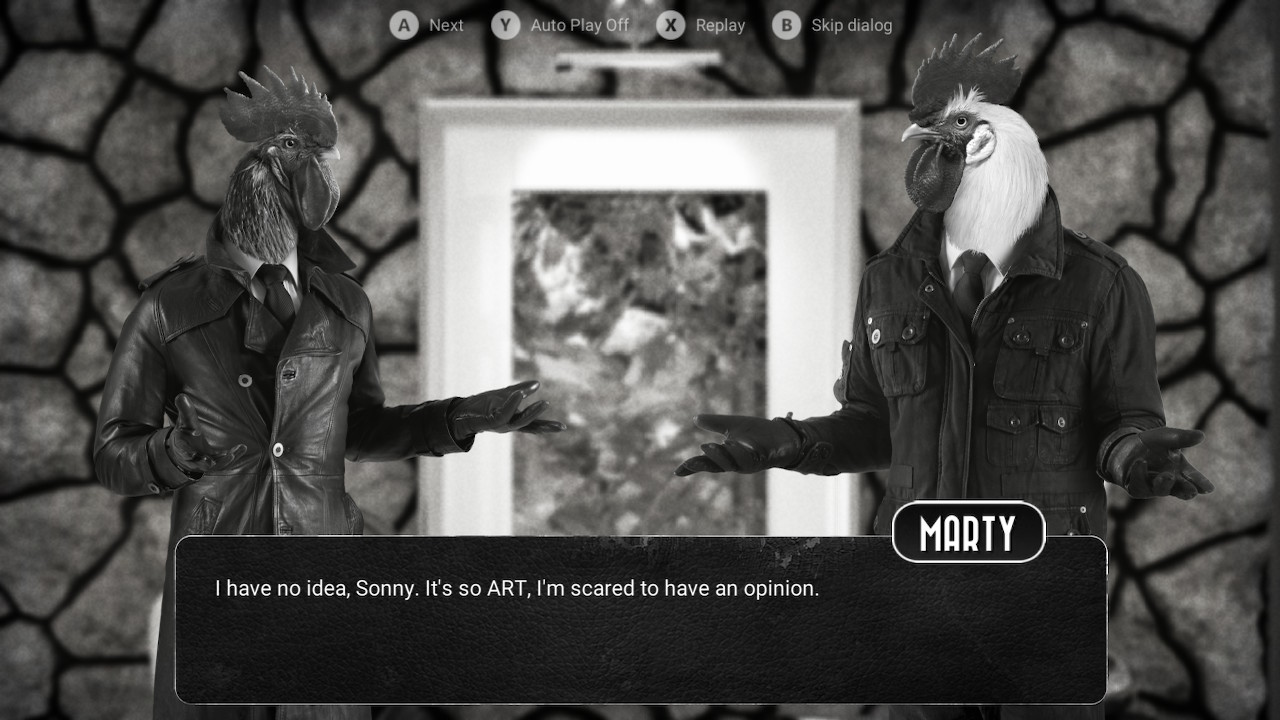 I don’t know what it is with 2020, but I feel like I could sum up my social experience with, “I’m not a furry, but…” Seriously, between the western releases of Beastars and BNA: Brand New Animal and me catching up on the comic series Blacksad, I’ve been saying “UwU” unironically for months now. Something else to add fuel to my furry fire is Chicken Police – Paint it RED!, which is a wonderful film noir detective story with some greatly written characters (who happen to be anthropomorphic), and an interrogation mechanic that’s executed near perfectly. 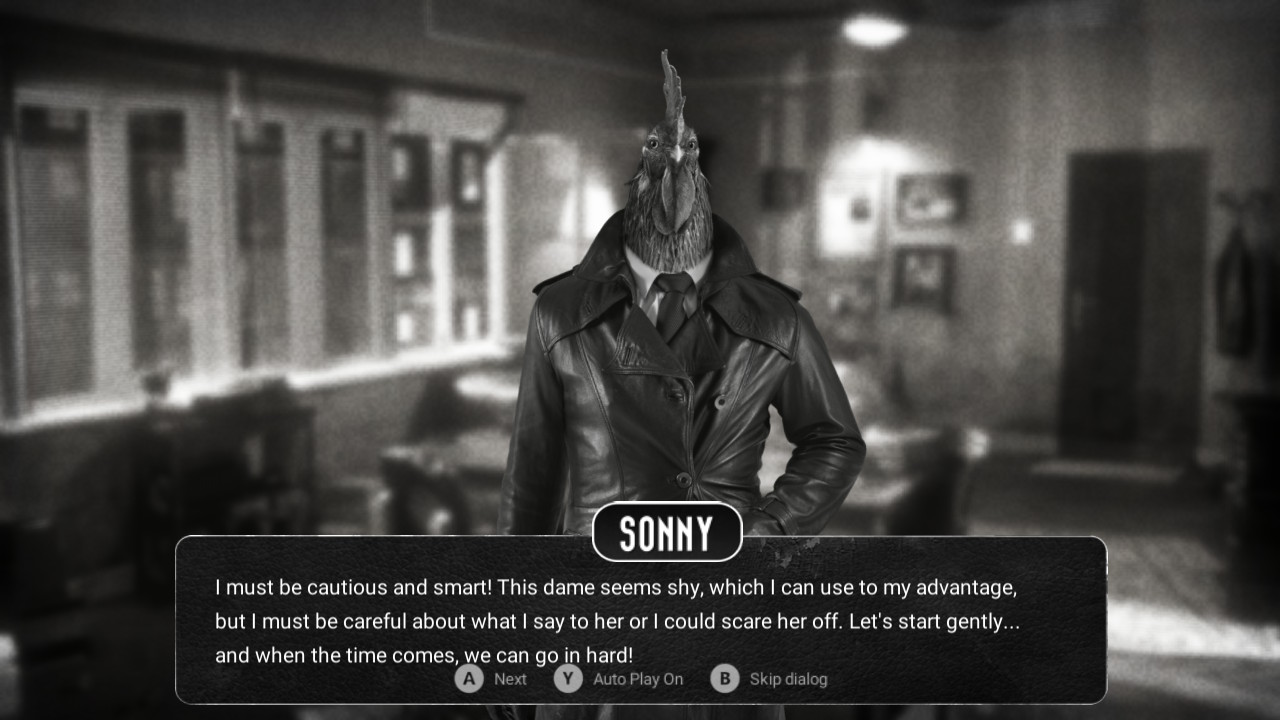 Chicken Police has you assume the role of Sonny Featherland, a hard-boiled cop that’s close to retirement (aren’t they all?), but is summoned to protect the lounge singer Natasha Catzenko. After reconciling with his longtime partner Marty McChicken (whose last encounter was a near fatal shooting which left their friendship in a rocky position), the two go out and explore the seedy underbelly of Clawville in order to solve what might be Sonny’s last case if they’re not careful.

From the very beginning, the atmosphere of Chicken Police is dark and dreary, and evokes the genre of film noir from the 20th century. While it does have a bleak tone overall, there’s still some hints at a buddy cop comedy, as the banter between Sonny and Marty never failed to leave a smile on my face when needed. Most of the game is drenched in a black-and-white color scheme, with splotches of color occurring in flashbacks or when something particularly gory occurs. It’s a slick, stylistic approach to a mystery adventure game that looks gorgeous, even running on handheld mode. 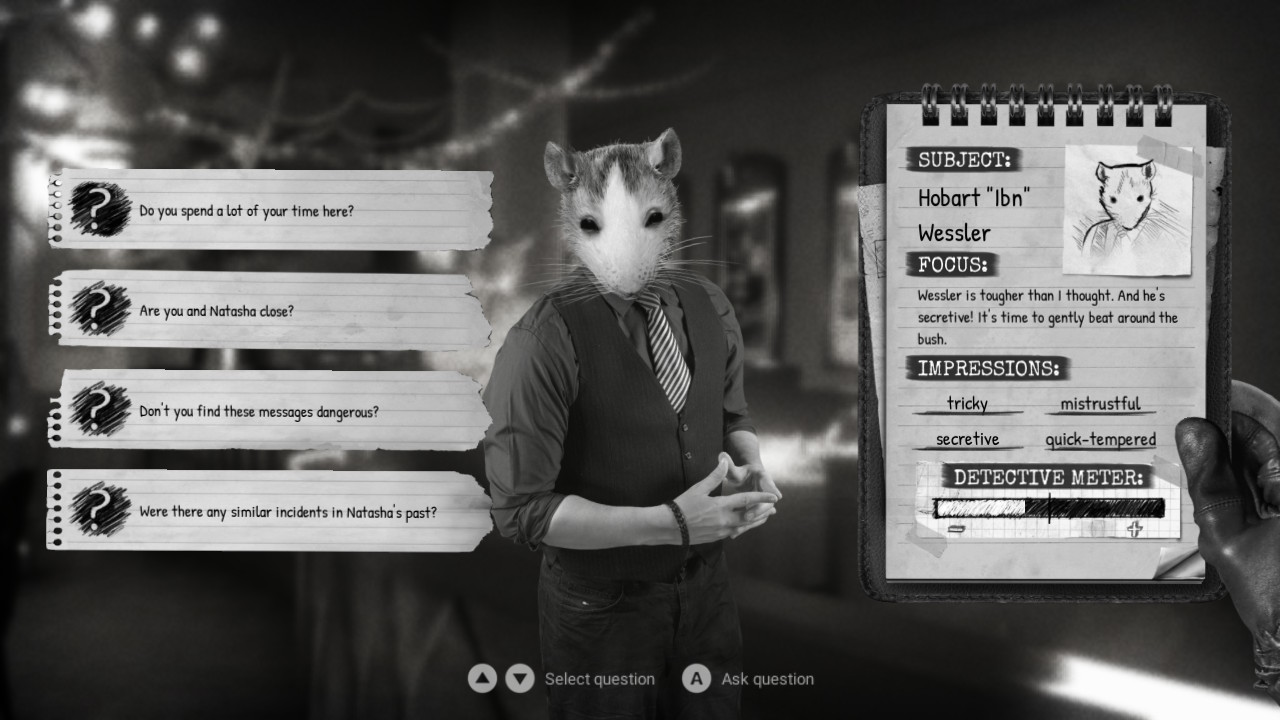 As an adventure game, you can observe different clues by moving your cursor around the screen, with interactions popping up depending on where you click. I did enjoy the fact that almost every object has multiple pieces of dialogue (which are fully voiced), and are usually optional, which means you can be thorough or quick with your investigation. I commend how deep the worldbuilding of the game is, with a Final Fantasy XIII-like encyclopedia of how Clawville and its universe works; it even has its own version of Lovecraftian elder gods! If it’s not apparent already, this is a very M-rated title, but more for mature concepts rather than its content (though it does have its share of violence and colorful language).

This painstaking attention to detail is welcome and makes you feel like you’re curling up to a great book. While the game does have a linear story structure, there are optional segments and locations you can visit that will flesh out the characters and their personalities. It’s these extra scenes that make the city of Clawville a bit more human than what the package entails. (Pun intended.) 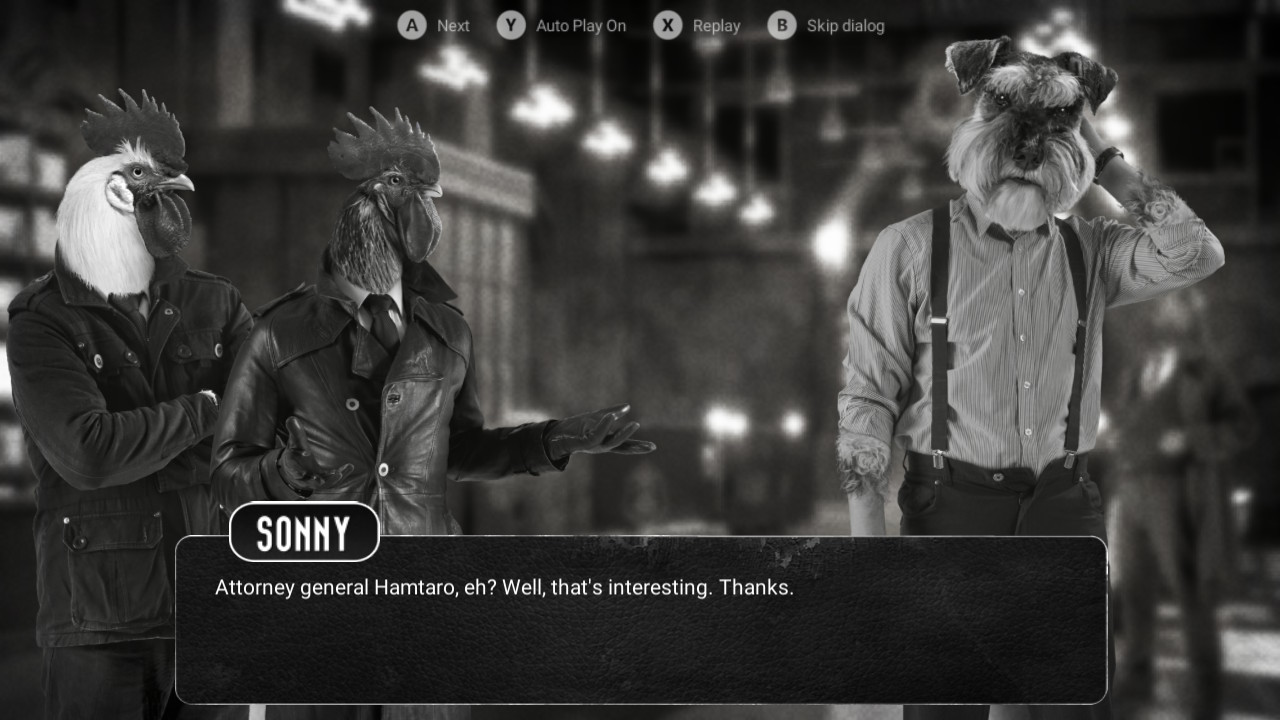 When you interact with people, up to four options can appear: You can look at them (which triggers a monologue or conversation between Sonny and Marty), speak with them (which will cause a conversation to occur), ask them a question (based on if you have the right information), or interrogate them.

This last option is where the meat of the puzzle gameplay truly happens, as these act like the investigation sections of something like Ace Attorney (or more appropriately, Aviary Attorney). In order to convince the person you’re interrogating you’re legit, you’ll have to earn their trust while not straying from the information you want to obtain. There are multiple branches of questioning you can pursue, but losing focus on the question will cause your detective meter to fall; you can actually fail these segments, so you’ll need to be extra careful on how you approach a topic. 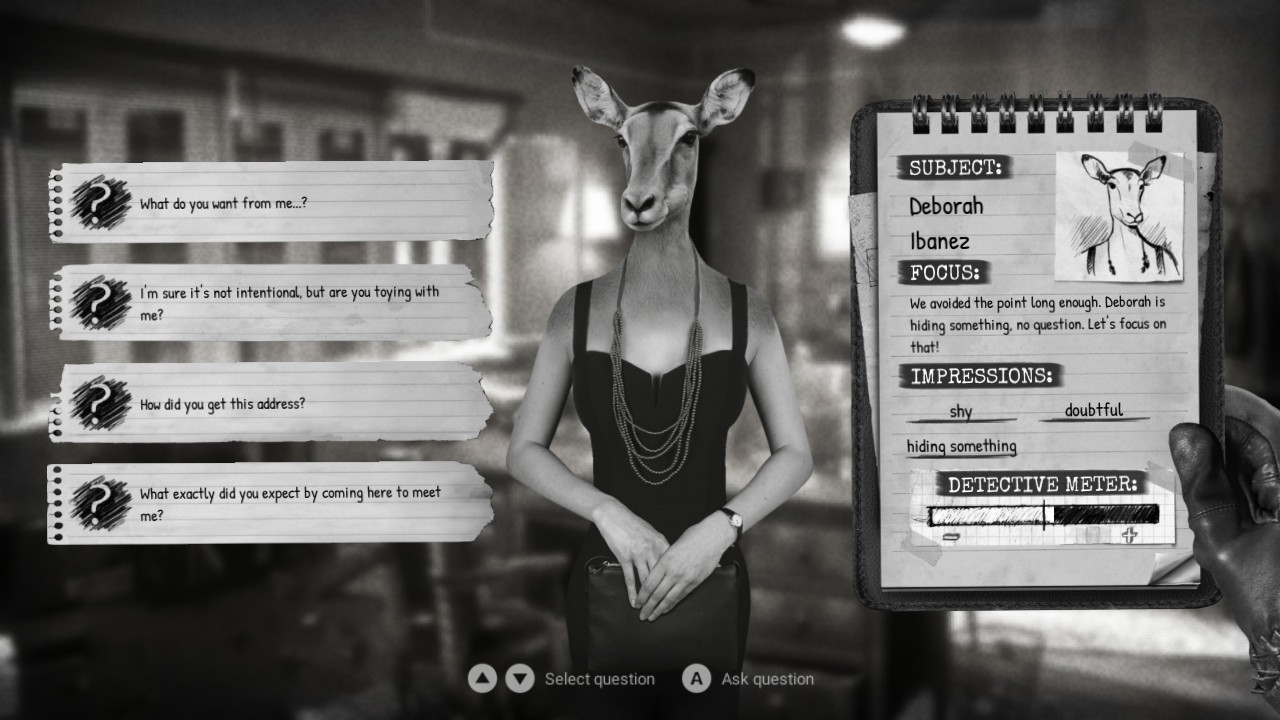 For example, sneaky Mafioso Ibn Wessler wants you to appeal to his secretive nature by trying to beat around the bush when it comes to questions. Asking directly will cause your meter to go down. It’s these moments of Chicken Police that make the game truly shine, but there are times when the hints given are a bit too obtuse to be taken in a straightforward manner, especially later in the game.

The best part of this game is the voice acting, hands down. Each character has a distinct personality and strong performance, and I couldn’t find anyone that had a weak one here. Seriously, close your eyes when listening to a conversation; you’ll forget the sometimes goofy half-human/half-animal hybrid character designs and think you’re in the middle of a mob film. It even tackles the issues with racism and class disparities between species, and feels like a mishmash of Sam & Max as well as the aforementioned Beastars and Blacksad. Is it The Godfather in terms of writing and production? No, but it’s darn near close.

Chicken Police – Paint it RED! is surprisingly one of the best written games of this year. Hidden behind its animal/human exterior lies a gritty tale that’s sharply written, with a mix of humor and thrilling drama that will have you clucking for more.

Elisha Deogracias is an aspiring accountant by day, freelance writer by night. Before writing for Gaming Trend, he had a small gig on the now defunct Examiner. When not being a third wheel with his best friends on dates or yearning for some closure on Pushing Daisies, he's busy catching up on shonen manga and wacky rhythm games. Mains R.O.B. in Smash. Still doesn't know if he's a kid or a squid.
Related Articles: Chicken Police - Paint it RED!, Indies
Share
Tweet
Share
Submit