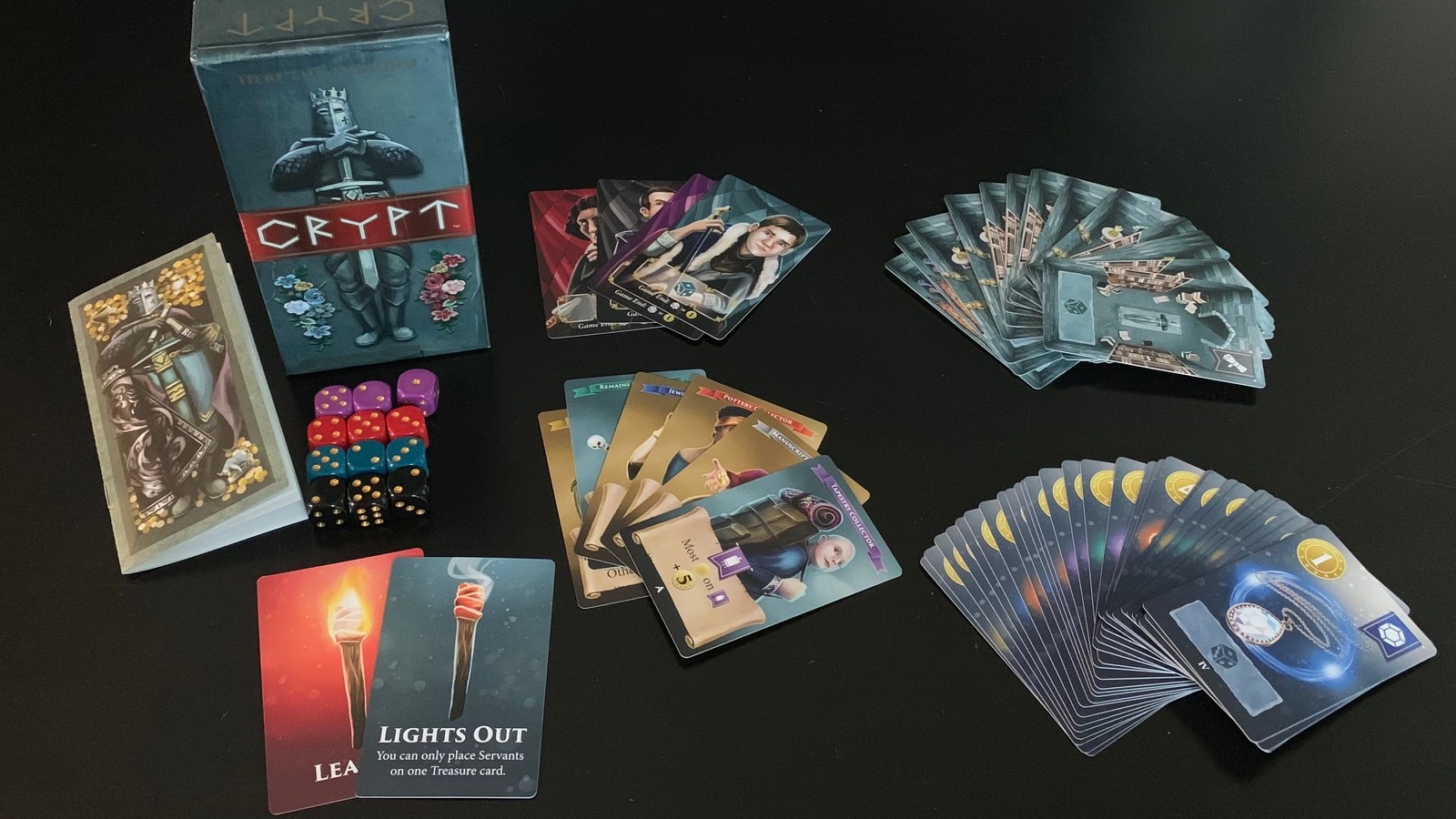 Your father, the King, has passed away, and you’re very upset about it. While you wait to see which of his riches he has bestowed upon you, you get the news that really disturbs you; he’s taking it all with him. You and your siblings quickly come up with a plan to take what you deserve from your selfish late father in Crypt.

Crypt is a travel-sized dice bidding war for 1-4 players. In it, you and the other players (your siblings) send your servants to your father’s crypt to take back the treasures he decided to have buried alongside him. Unfortunately, all your servants showed up at the same time, and careful moves must be made in order to get exactly what you want.

Simplicity is a key feature of this game, which makes the whole box small enough to fit in your pocket. The box contains 12 dice (3 in each player’s color), 4 symmetrical player cards, 2 torch cards that determine first and last player, 6 double-sided collector cards, and 48 treasure cards which are also double-sided. The treasures are divided up into 6 treasure types (one for each collector interested in them), and each has an illustration of the treasure and coin value on them. The flip side of the treasure simply shows the treasure type and the crypt itself. The box is even used in the game as a place to hold “exhausted” dice, and tells you so on the printed lining. 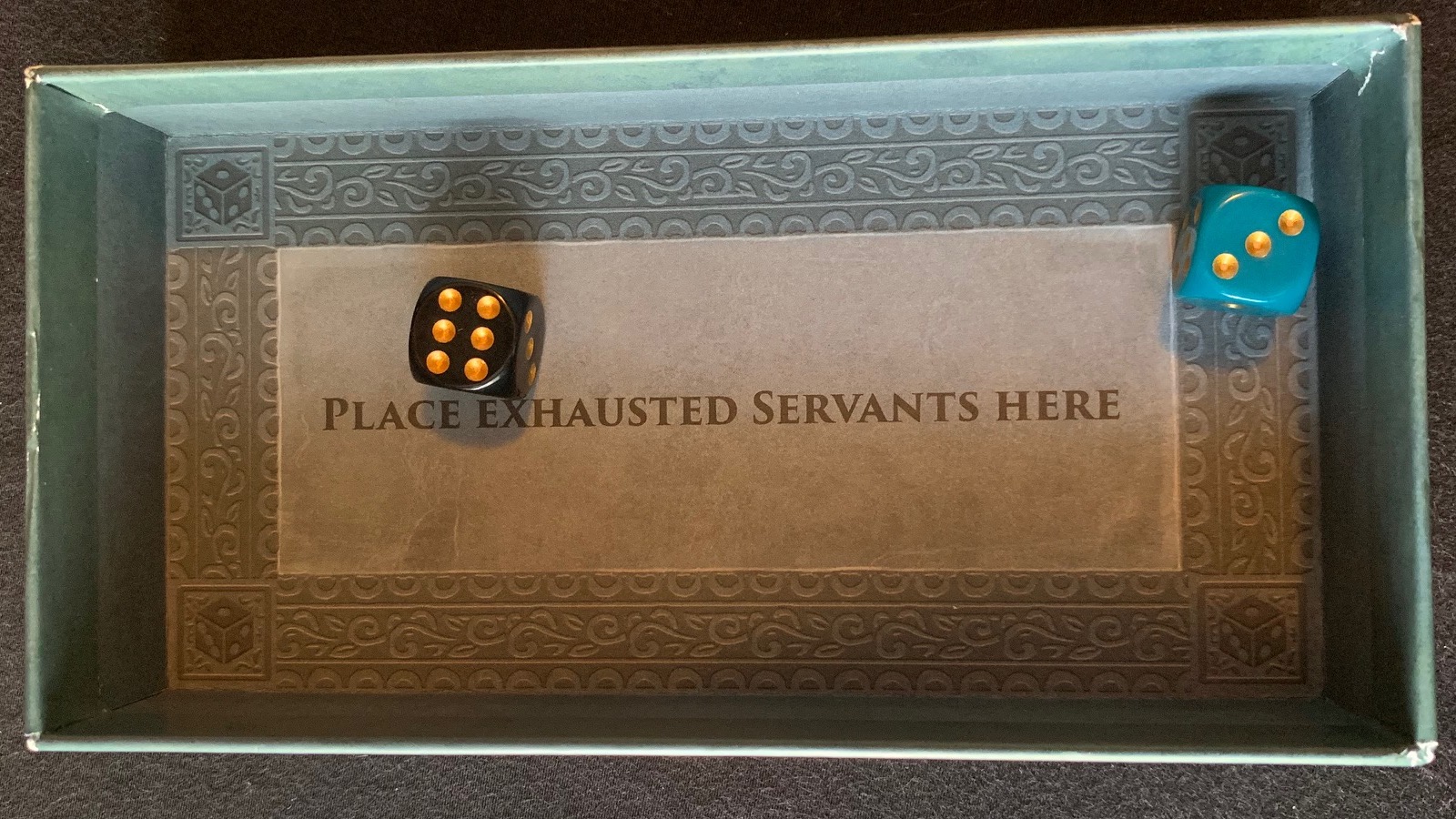 Players set up all of the treasure collectors in a row with either side randomly picked, and then deal out a number of face up treasures and 1 or 2 face down treasures based on player count. The more players, the more available treasures. Each player chooses a character card, and the 3 dice of the matching color, and determine who goes first.

The players then choose which treasures they want and bid on them, sending their dice (servants) to the cards to represent their bid; the higher number beats the lower number, and each player decides what number their dice will have on them. All of a player’s dice can be placed on the same card or spread out across multiple cards, but if they are on the same card they must have matching values. That is, if you play 2 dice on a single treasure, they must both have the same number showing, but the total added together counts as your bid. This matters because even though you do want to bid high, once you win the bid, all of the winning dice on that card are rolled. If the value rolled doesn’t match or exceed the value bid, those dice are “exhausted” and put in the top of the box designated for that. Exhausted dice can’t be used again until the player uses a future turn to reclaim them. Therefore using 2 dice each with a 3 on them is less risky than using one with a 6, but it lets you bid on fewer cards. 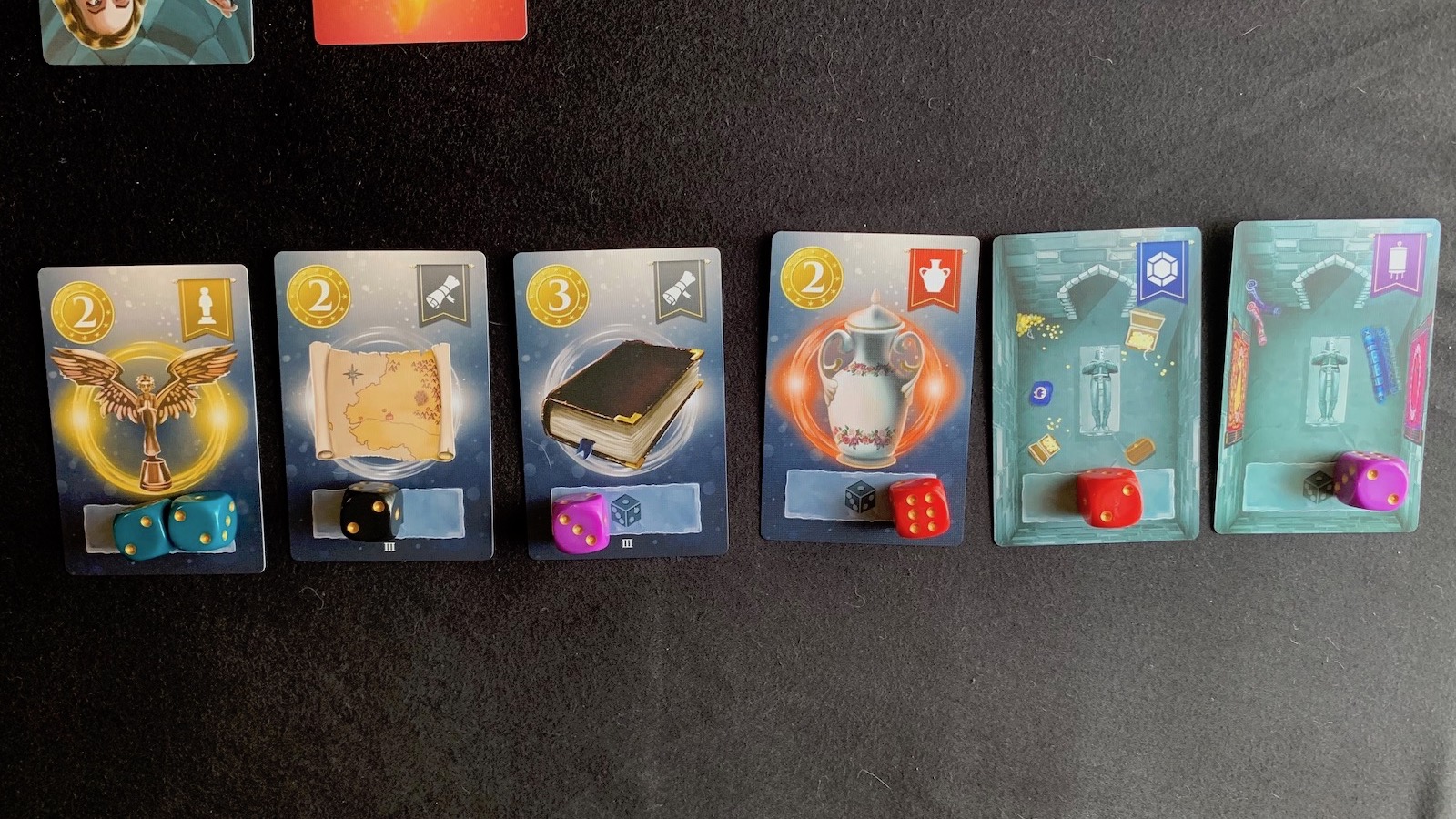 Each player in turn gets a chance to outbid each other, bumping the dice of anyone they outbid, and returning them to their owner. The last person (signified by the “lights out” torch card) has the advantage of bidding last with no one behind them to bump them, and because of this advantage they only get to bid on one treasure. Players then take the cards they earned placing them face down in front of them organized by type, and take back their dice they used to do it. Then they pass the first and last player torch cards to the left and start the next round. 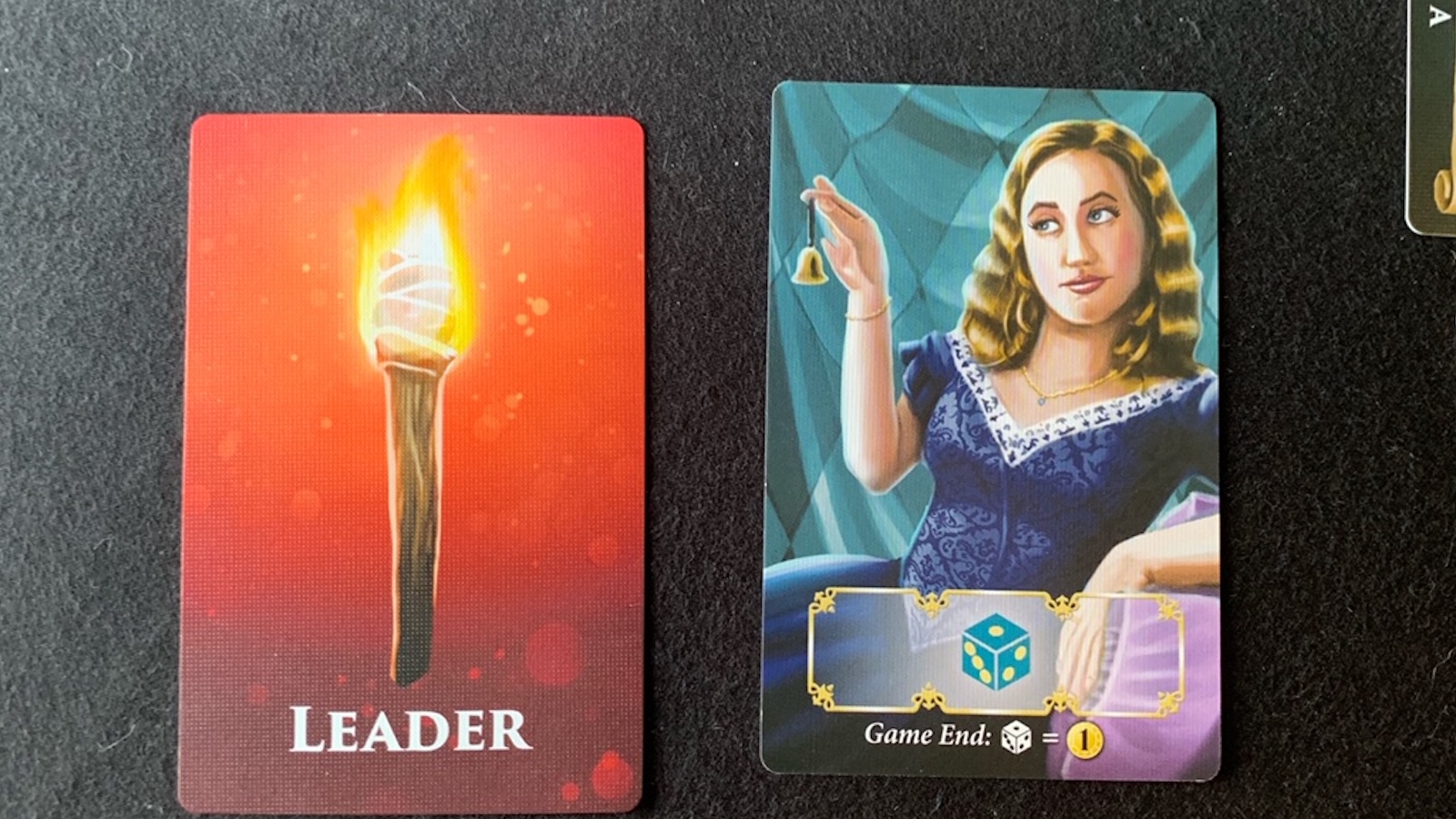 Mostly that’s how you play the game, simple and easy. You do this until the treasures run out, then the winner is the player who ends up with the most valuable collection of treasures. Deciding which treasure you want can be tough though, as 1 or 2 of the cards available to bid on are face down showing only their type, and there are 6 collectors to the side who offer you benefits for collecting their type. Depending on what you collect, you can reference the collector cards and make each treasure worth more points at the end, make sets of treasures worth more, or take immediate actions such as recovering or retooling dice. The immediate actions require you to flip the cards of that type over, showing that this option is finite based on how many of these type of treasures you’ve acquired. 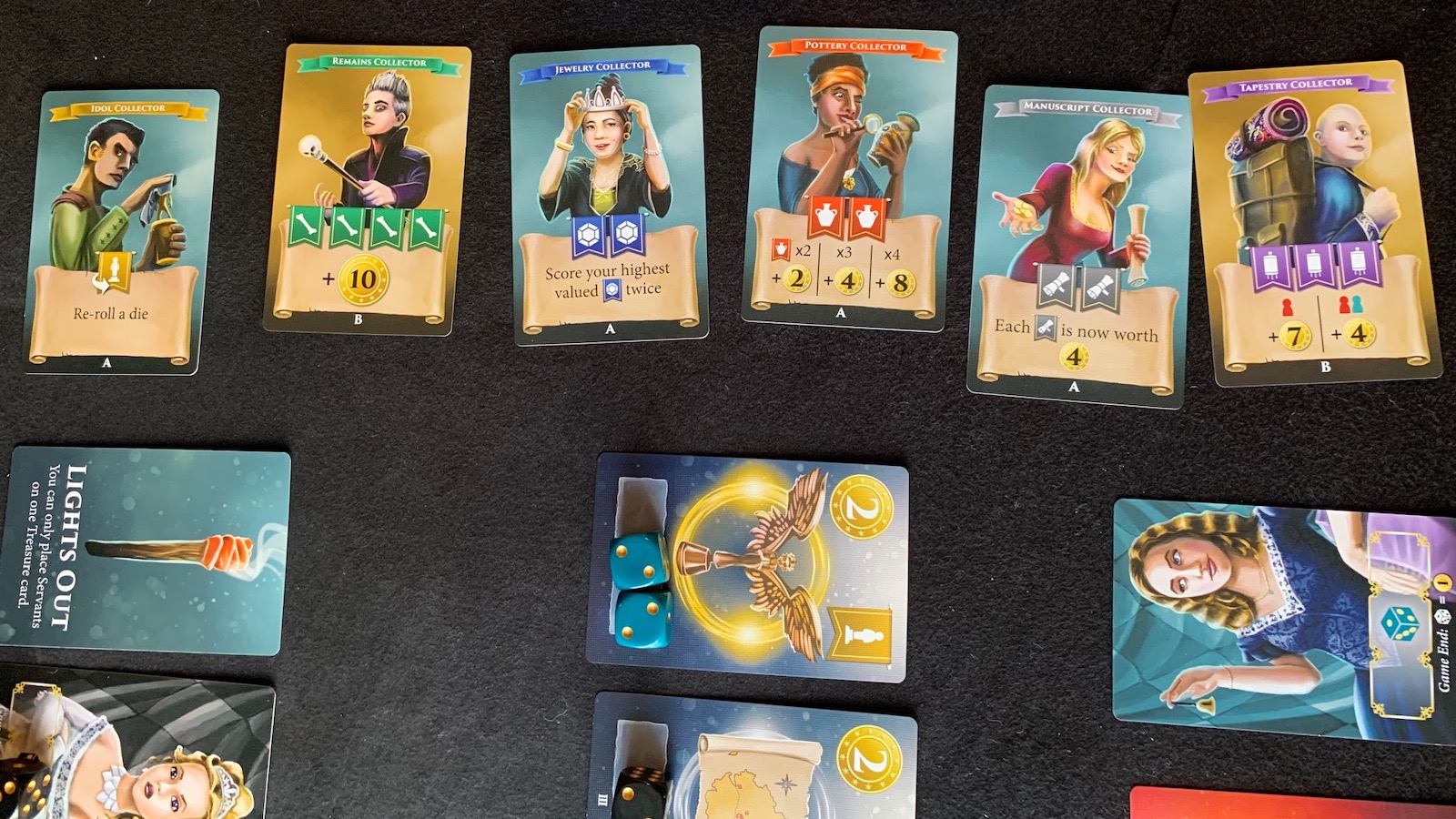 As a gamer who commutes by bicycle, I’m always looking for a good game that I can keep in my backpack at all times for a quick match. Most titles that fit this bill are so simple that I haven’t bothered, while the ones that do get worn out because I love having a quick game with a new player. Crypt is the type of game I’ll keep on my person for a while- It’s complex and random enough to play many times with the same people, and easy enough to learn to get new people and non-gamers to try it out. The randomness and risk are key for replay, as a game of this sort can get boring once everyone knows the best way to play before the cards are even drawn. Having to risk exhausting your dice by rolling them after successfully acquiring a card you bid on is a great mechanic, as it’s easy to outbid someone, but you risk missing out on the next turn entirely. The collectors having 2 different sides dealt at random gives you a nice array of sets to try to get in order to use them best. The game even has a 1 player option which I doubt will be heavily used, but is well thought out and a nice option should you find yourself alone and bored.

The turns seem to end too abruptly, though, and I could have used maybe two rounds of bidding per round instead of just the one. I don’t hate this mechanic, in fact it makes you really make your decisions count, but sometimes people just negate everything you did that round, and you sit there feeling like you accomplished nothing.If you play well, this may rarely happen, but the instances when it does, it feels less like the “Oh! You got me!” well placed blow from a foe, and more like “Well, that was a waste of time.”. I do like that the last player is at a slight disadvantage to compensate for the advantage they inherently have, but in the 2 player game, it translates to the first player getting 2 turns as the bearer of both torches. This can be worked around and doesn’t count out the second player, but when explaining that for the first time, you can see “but that’s not fair” rolling around in people’s heads. The collector cards do offer varied plays of the game, but I found that 1 or 2 of the “A” sides that are usually less complicated were somewhat ignored because the payoff wasn’t worth it. I would always want to randomize them, but could see getting a little bummed if one of those simpler sides came up. But hey, that just makes other types of treasures more desirable, and therefore harder and more fun to try and get! 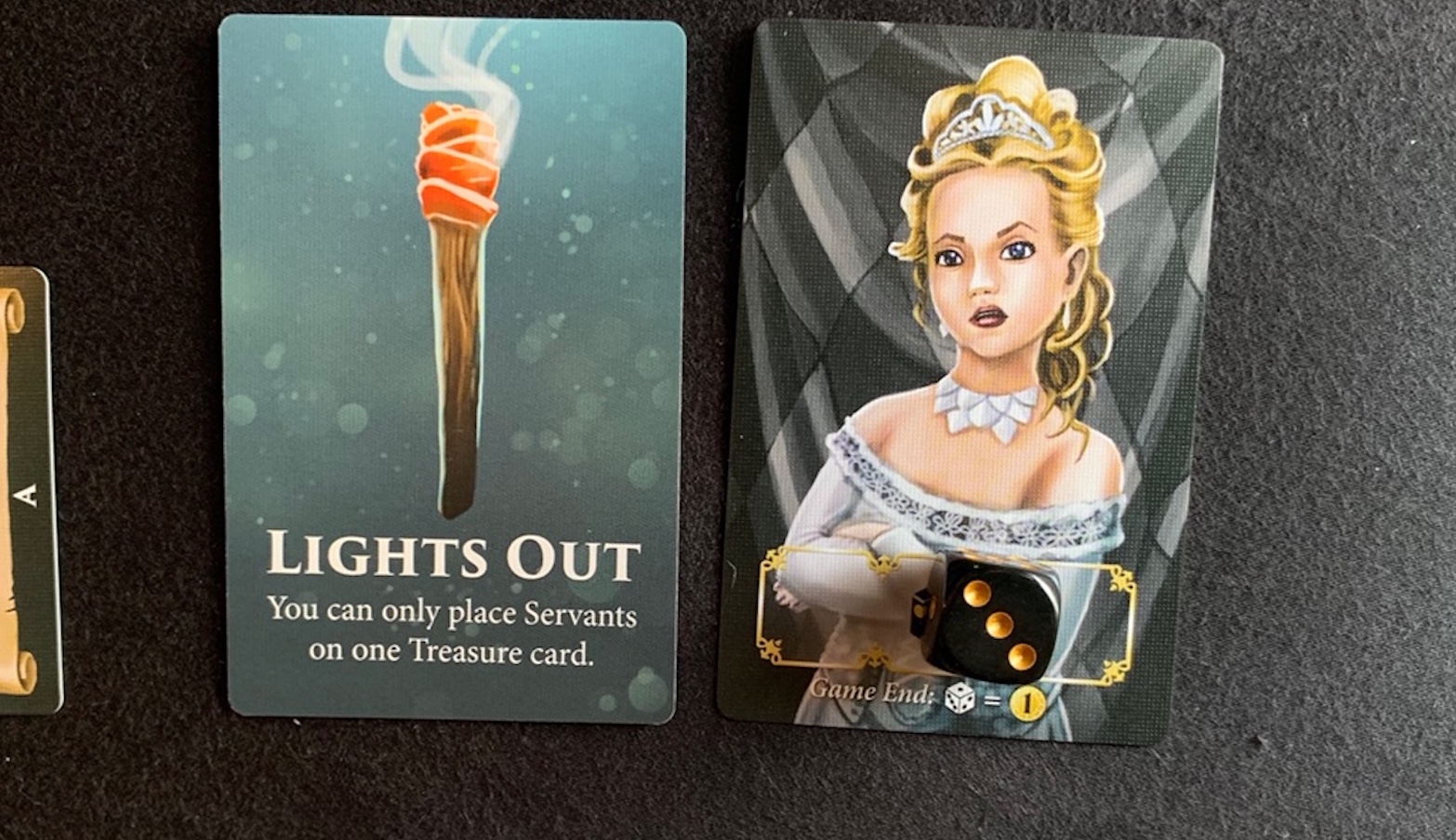 The game quality is beautiful for such a small game, and I really appreciate what they accomplished here. If you like being prepared to teach a new game to friends at a moments notice, throw this in your bag. It won’t take up much space, and you’ll enjoy yourselves while killing time. I doubt it will see much time on your table at home though, and your larger favorites will remain your favorites.

Crypt is a fun game to have on you when you suddenly have time to play with a friend. It’s easy and quick enough that kids well below the suggested minimum age will have fun with it, but complex enough that adults will enjoy it as well. Once you get to the table at home, you’re likely to pass it up for games with a box big enough to contain more depth and fulfillment.

Nick Cvercko is a 37 year old fella from Flagstaff Arizona that lives with his wife and pets in Austin TX. You can find him at Lamberts Downtown BBQ mixing up all the tasty drinks. He may be a little too in to board games.
Related Articles: Crypt
Share
Tweet
Share
Submit