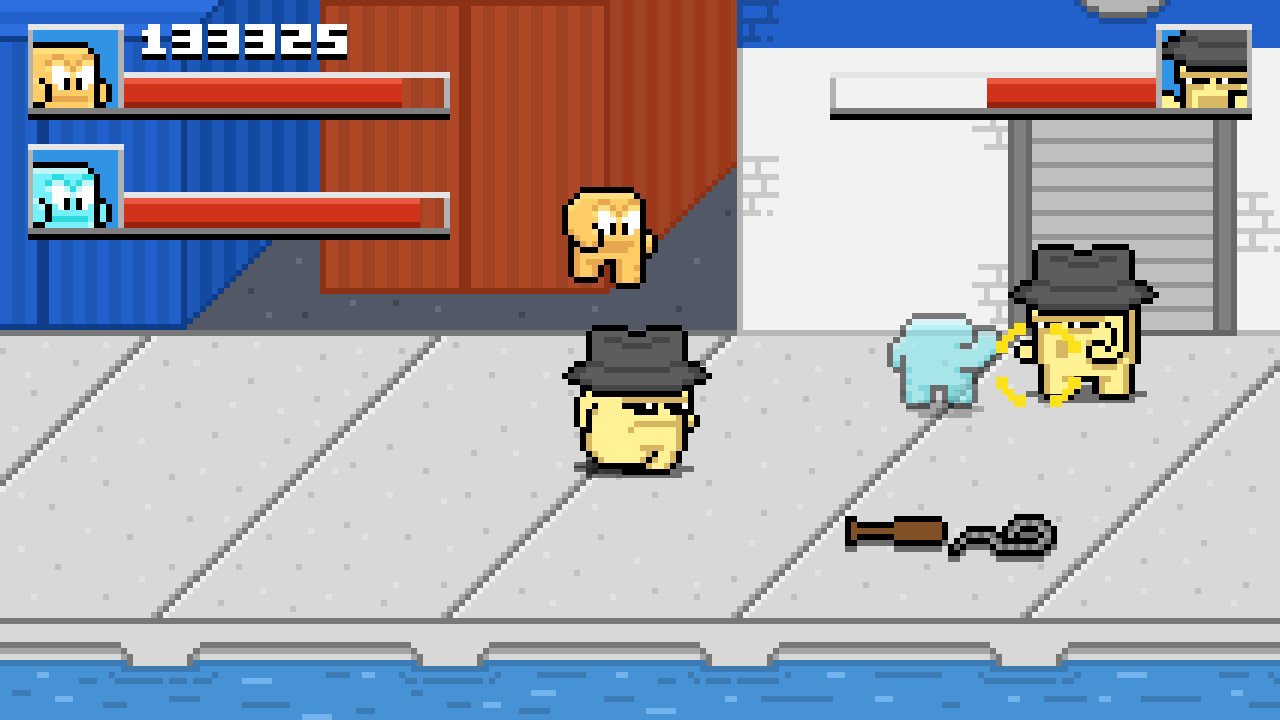 The beat-em-up genre is my go-to cathartic entertainment when I’m feeling bored; as such, the Warriors/Musou series is one of my favorites. These games can be mindless and even numbing at times, but regardless of quality, they’re still enjoyable when I just want to chill and not think too much. Ratalaika Games has published Squareboy vs. Bullies: Arena Edition, an expanded version of a Gameboy-inspired brawler, for the Nintendo Switch; while a competent and functional title, it lacks inspiration and style in its execution.

As the title implies, Squareboy Vs. Bullies: Arena edition stars the titular Squareboy (a small nondescript square figure), as he randomly gets beaten up by the titular bullies (bigger nondescript square figures). In order to get his revenge, he learns fighting moves from a sensei at a dojo. After this happens, the dojo is attacked, and it’s up to Squareboy to save the day. It’s a clichéd storyline to be sure, but most beat-em-ups were never heavy on award-winning narrative.

Reminiscent of something like River City: Tokyo Rumble, you control Squareboy as you punch, kick, and grab bullies into submission with a few moves that are all available at the start of the game. Throughout the thirteen stages, you’ll have to fight waves of bullies before reaching the end of the level. It feels like an arcade brawler since you’ll have to finish off the current wave before advancing, and the ground is littered with different powerups and weapons at your disposal. Want to reflect a lemon-shaped bullet? Use a bat and just swing it away! I feel like Squareboy Vs. Bullies captures the retro Gameboy feel quite well, and the visual style is bright and colorful with its pixelated sprites.

However, while the game does feel retro in nature, it’s unremarkable in everything else. While Squareboy can move all over the stage, movement can be clunky at times, especially when moving up and down. Like River City: Tokyo Rumble, this sluggish movement also caused some enemies to gang up on me, and the limited moveset meant that I had to mash one dash attack over and over again in order to cause any lasting damage. However, the final boss is immune to said attack, so be ready to mash another one in order to win. Enemy variety is disappointing as well, with less than a dozen unique enemy types with which to destroy. You have regular bullies, bullies with different colored hats (some throw baseballs or shoot you!), and ninja bullies. And they all speak like brutes. Yeah, they weren’t too creative with the enemy design here.

The music is serviceable but not memorable, and the same could go for the level design;the stages are flat surfaces with no potholes or other hindrances within, so it always just feels like you’re walking a straight line instead of a sprawling arena. After a while, the cathartic gameplay can feel repetitive, and since you have the same moves from beginning to end, it doesn’t feel like you’re progressing at all.

The game is only $5, but it does seem like it could use a bit more content as well. I did appreciate the addition of the aforementioned arena mode, which tasks you with fighting as many enemies as you can before perishing, but here could have been more modes aside from the inclusion of co-op. (This game is more fun with a friend, but not by much). The main campaign is over in little over an hour, so the main replay value consists of getting high scores in the arena mode. It would’ve been cool to see a versus mode or something else in addition to what’s offered, but at such a low price, it’s hard to complain.

At the end of the day, Squareboy vs. Bullies: Arena Edition is a serviceable beat-em-up that doesn’t go out of its way to stand out. While it does have a distinct Gameboy-inspired feel, its repetitive level design, disappointing enemy variety, and lack of content make for a middling five dollar experience.

Elisha Deogracias is an aspiring accountant by day, freelance writer by night. Before writing for Gaming Trend, he had a small gig on the now defunct Examiner. When not being a third wheel with his best friends on dates or yearning for some closure on Pushing Daisies, he's busy catching up on shonen manga and wacky rhythm games. Mains R.O.B. in Smash. Still doesn't know if he's a kid or a squid.
Related Articles: Indies, Squareboy vs. Bullies: Arena Edition
Share
Tweet
Share
Submit