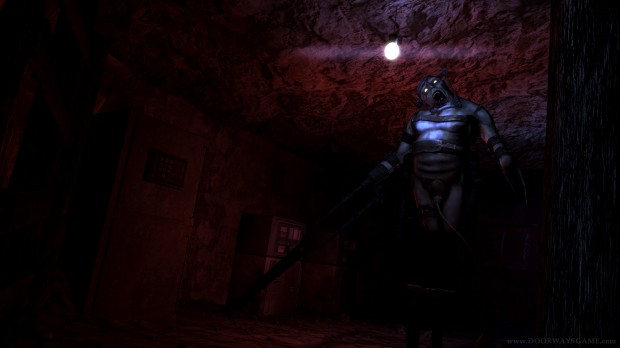 The advent of streaming video did a lot for gaming. Let’s Plays and YouTube personalities changed the way games were consumed, and gamers started watching rather than interacting. Horror gaming especially gained a greater foothold; audiences enjoyed watching their favorite personality shriek in terror at every turn. After the success of Slender, Amnesia: The Dark Descent and more recently, Outlast, many horror games started popping up. Doorways: The Underworld certainly falls under the category of “YouTube facecam horror,” but does it provide a proper gaming experience?

Underworld is the third title in the Doorways series, built around the story of psychic agent Thomas Foster, who is searching for a demented neurosurgeon inside her own mind. It is a convenient setting that allows for the player to explore a multitude of staple horror atmospheres, including a hospital, underground mine, and sewers. The story is nothing new to those familiar with the genre, as you find medical records and journal entries strewn about as you explore, describing the details of how these monsters were created.

This guy was a lot scarier when you couldn’t see him.

Oh, the monsters. The core of every scary game, the component necessary to making your game stand out. Like the plot, the monsters are mostly predictable: a hulking butcher, a limbless husk with blades for hands, and the list goes on. Even the visions of victims play out stereotypically, as you get psychic flashes of previous horrors that have no real impact other than annoyance.

The other staple of these games, besides a monster that only jumps out when the unseen timer has counted down, is the puzzles. Since horror games tend to give you no method of fighting the monsters, they instead give you puzzles that require constantly fleeing a beast while looking for a key or hand crank. This is a nice one-off, but the problem is that the entire game is based around this repetition. The player enters a new area, and solves a simple puzzle while reading notes about a monster’s creation. After solving the first puzzle, the player moves to the second half of the area, which has an almost-similar puzzle with more keys or cranks to find. The monster is introduced, and the player must solve the second puzzle while hiding, and then complete a chase sequence landing them in a new area. Repeat ad nauseum. Congratulations, you’ve played Doorways: The Underworld.

There’s a significant amount of malpractice in this game.

To be fair, Doorways has merits to weigh against its shortcomings. The sound design is very well done, from the ambient noises to the voice acting of Sam Mowry, the voice of Alexander from Amnesia. While sometimes bordering on the ridiculous, Dowry’s deep ruminations are certainly a step up from the usual pants and shivers of most horror games. The game also supports the Oculus Rift, and is likely a much more frightening experience on it. The addition of psychic flashbacks were also interesting, changing the environment at the cost of alerting your hunters, but it does little in practice to elevate beyond the “find key, use key” monotony of each puzzle.

For all its faults, Doorways delivers on what can be assumed are its goals: it delivers a horror game for Oculus supporters in need of one, and YouTube personalities will definitely pick up this title for a series. For your average gamer at home looking for a thrill, however, you’d be better off finding something with better design and more carefully-executed scares.

The scariest thing about this title is the horror of facing another “find the key puzzle.” Oculus support and solid voice acting doesn’t save Doorways from bad puzzles, poor monster design and ineffective scares.