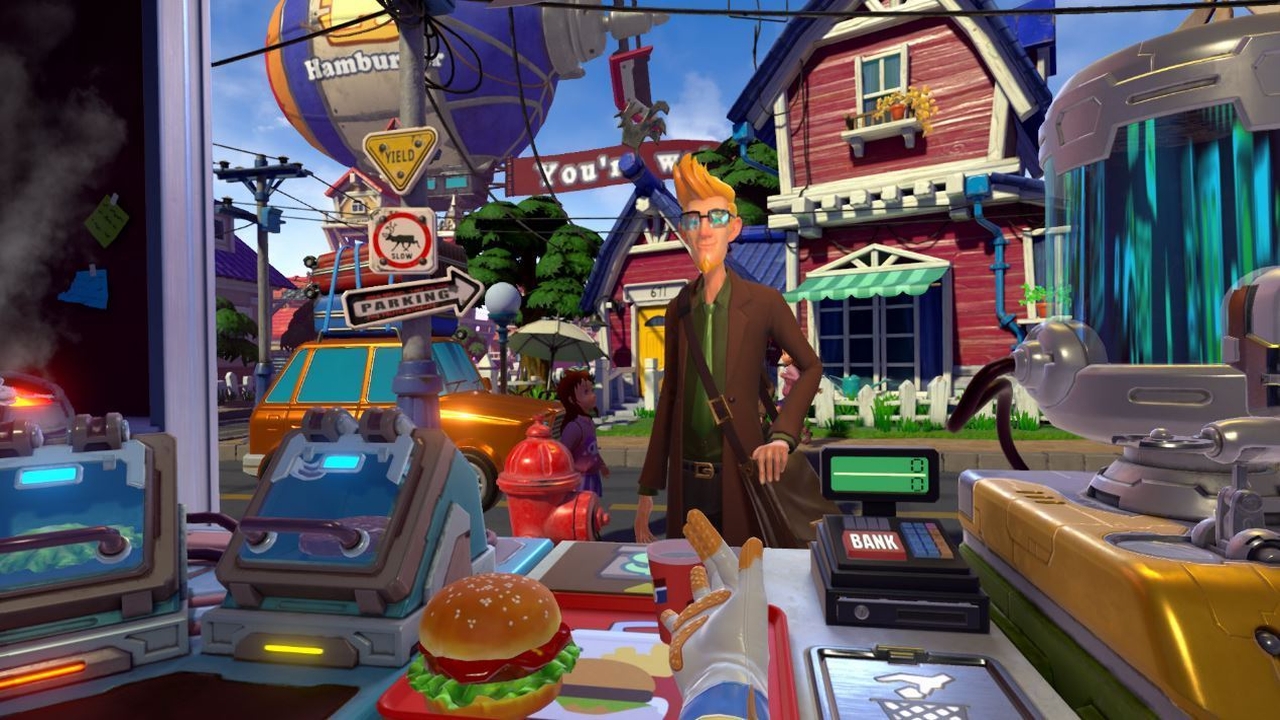 There are a lot of power fantasy, giant mech, shooting up the bad guys sort of VR titles on the market, but every once in a while you want to flip burgers and serve up a bag of greasy fries. Let’s hop into what has to be the most futuristic burger shack on the planet and grill some meat in Winking Entertainment’s PSVR fast food simulator, I’m Hungry.

The premise of I’m Hungry is as precisely simple as you would expect. People come up to your little food stand, grunt out what they want, and it’s up to you to deliver it before they get impatient. The challenge comes from the pace, the complexity of the order, and precision of delivering it without any mistakes.

Your food shack can make several types of food — soft-serve ice cream, fries, soda, and hamburgers. The hamburgers are where complexity jumps in as you have to open individual food processors to get a bun bottom, lettuce, and a slab of pre-cooked meat, then add either cheese or some sort of hot sauce, then throw a bun on top. Once you’ve assembled the order and placed it on the serving tray, you’ll grab a bag, shake it open, and then drop it all inside (yes, the ice cream and drinks as well!) and then hand it to your waiting customers. Food in hand, they’ll fork over cash, and you’ll drop it in your register. Rinse, repeat, and get those folks something to eat!

Interactivity is the star of the show in I’m Hungry. Making fries means putting your basket underneath an automatic fry chopper, then putting that basket into some bubbling grease. Once they have cooked, you upend that basket into your fry container and a single fry cup will drop into the dispenser. It’s reminiscent of Willy Wonka’s Chocolate Factory where a whole lot of work and noise goes into making one very tiny Everlasting Gobstopper on the other end. Drinks and ice cream are made the same way — putting a cup under a dispenser, and then waiting for the results to drop into it.

Before you tackle a level you’ll be given a list of objectives like serving more than a specific number of customers, have fewer than a specified number of walk-offs, and put a certain amount of cash in your pocket — or at least that’s what my wife and I interpreted it to be as it’s not always clear. These will yield between one and three stars. Once you hit somewhere around the sixth or seventh level, you’ll find that no matter how fast you go, you simply cannot nab that third star. It’s time to talk about upgrades. 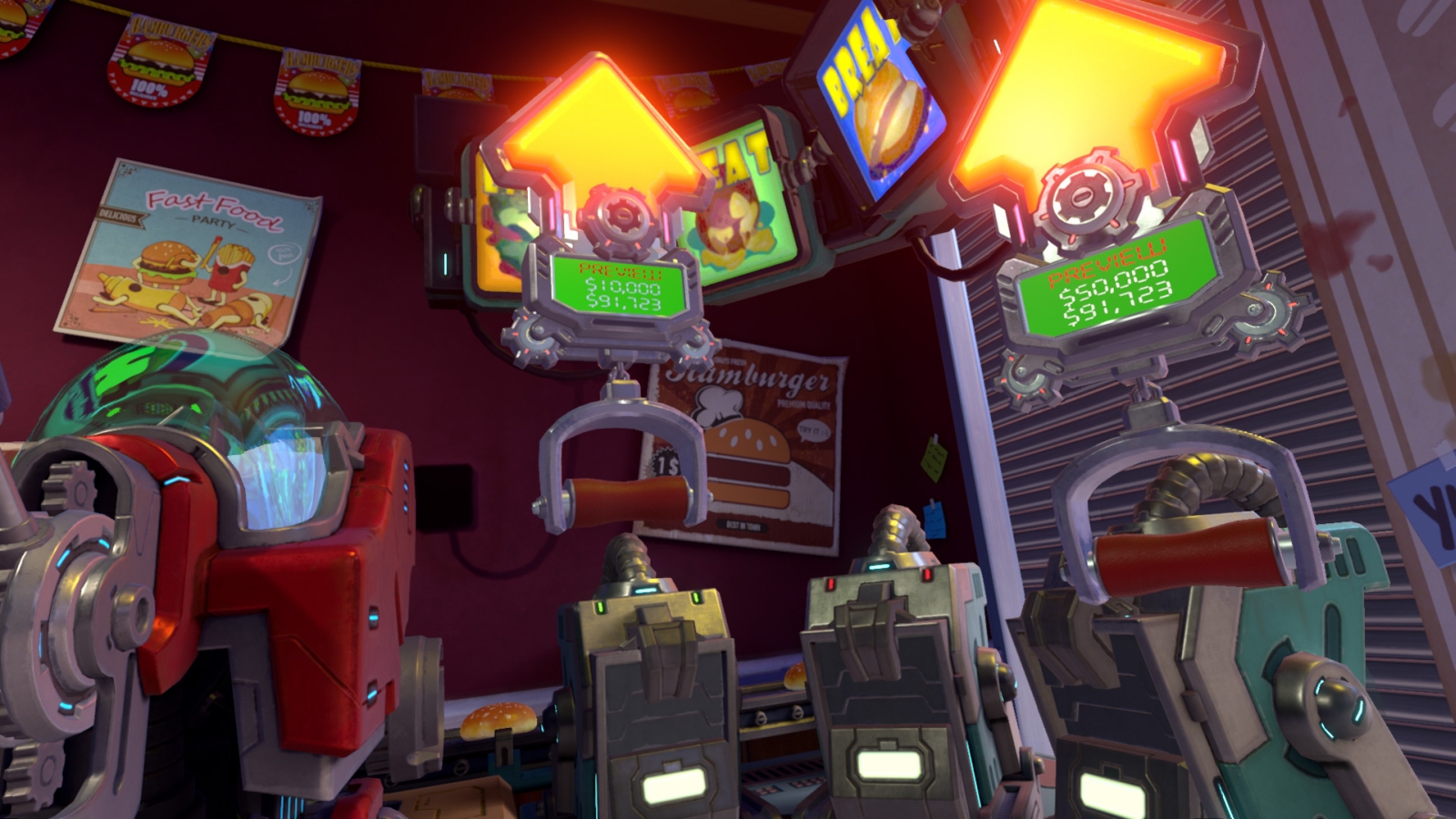 These upgrades are EXPENSIVE.

Each machine in the shop looks like a crazy futuristic automatic food generator. Food is replicated into existence inside the burger “generator”, and you yank open the little door to get access to it. Once you’ve accumulated $10,000 you can upgrade any machine in the shop. For example, the hamburger machine changes into something that looks like a multi-conveyor belt contraption that just churns out food without all the door pulling. The fry machine gets a secondary deep fryer, so it can make two little fry cups at a time instead of just one. Similarly, you’ll be able to double up your drinks and ice cream dispensing. After several hours of both my wife and I grinding away, we turned out our pockets and found about $4,000 and some pocket lint, and began to wonder about the efficacy of this little food adventure.

There’s no doubt that the grind in this game is real. That said, there are some shortcuts that can help you with progress towards the incredibly expensive upgrades. Every once in a while a customer will show up and request a golden version of a drink or ice cream. Shaking the soda and then slamming it down on the tray makes it a special version of that soda, somehow. Similarly, flipping the ice cream upside down and shaking it (not unlike the Dairy Queen Blizzard challenge) yields a golden cup of ice cream, for some reason. Completing these special orders will cause the customer to hand over a literal bag of money instead of the cash or coins they usually cough up. We’ll get back to this in a moment…first we need to talk a little bit about those customers. 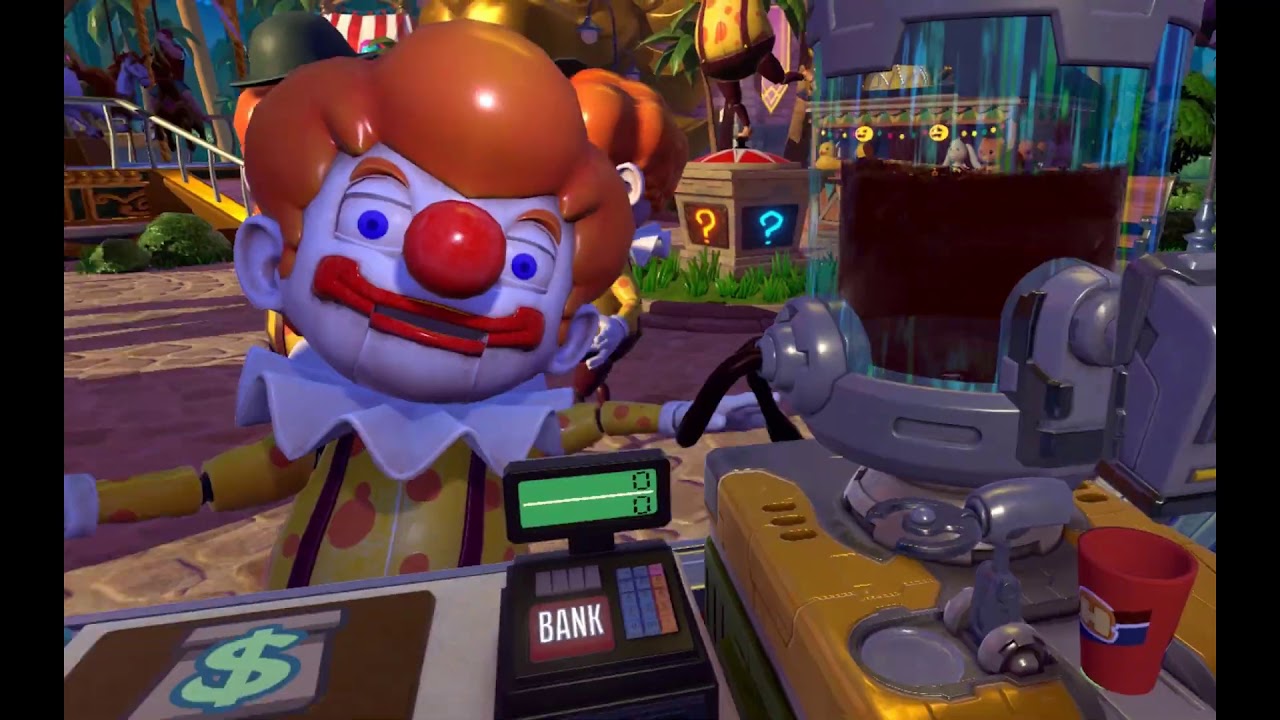 Afraid of clowns? The noises they make won’t help.

The voice…uh…noises in this game are the stuff of nightmares. There are no speaking parts, so you are treated to a bizarre mix of creepy extended laughs, grunts, squeals, squeaks, sighs, and other strange noises. It’s absolutely bizarre, but also clear that this is how developer Winking Entertainment avoids having to do a great deal of localization. Just the same, the sheer volume of it and its repetition got on my nerves extremely quickly.

The high point of I’m Hungry has to be the presentation. The customers you meet are hyper-exaggerated goofy caricatures with a great deal of personality. Similarly, the machines are extremely detailed and full of character as they whir, hum, and otherwise churn out food. 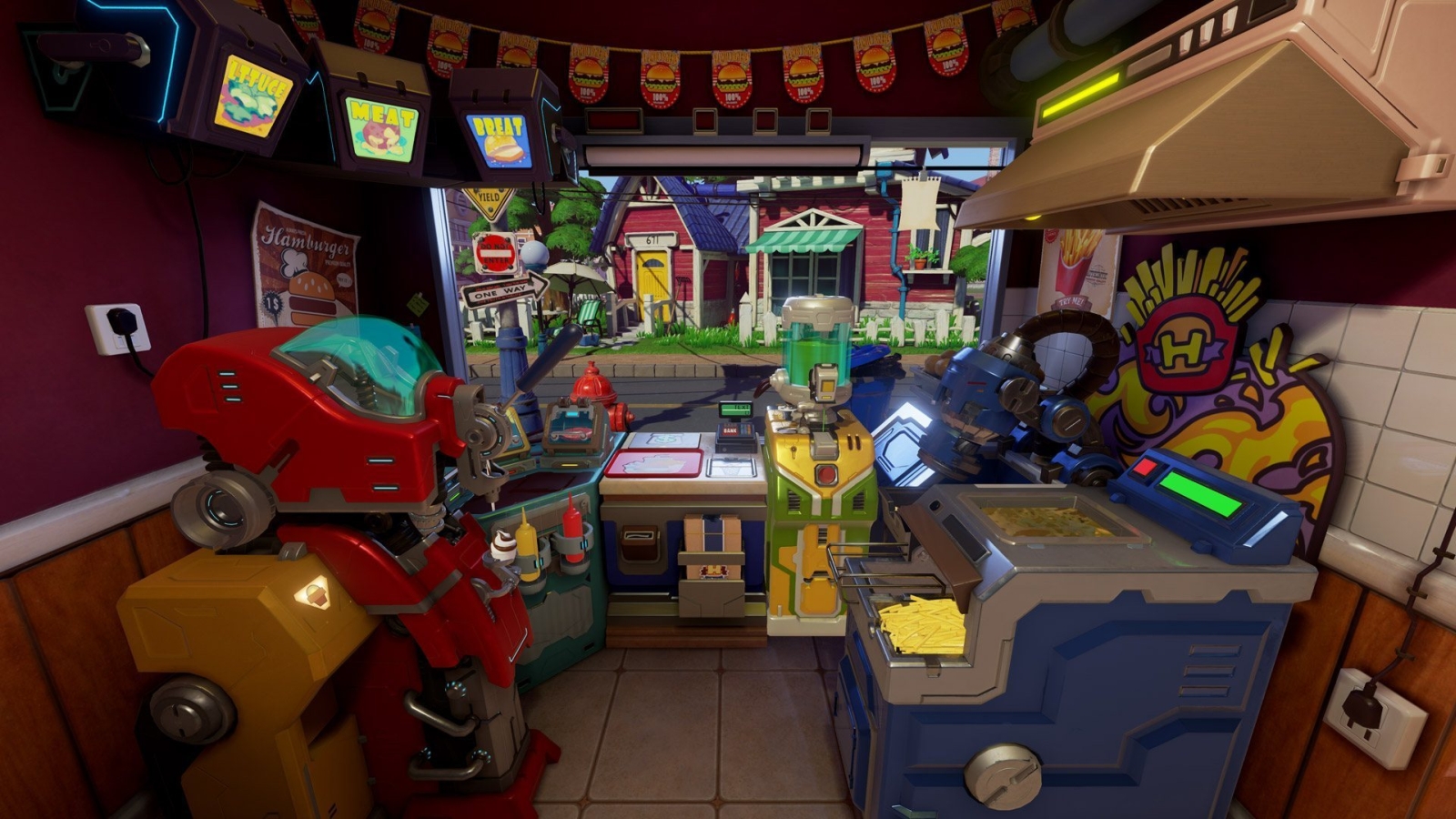 Once you’ve gotten over the thrill of assembling burgers, dishing out fries, pouring drinks, and serving ice cream, you’ll fall into the grind. What I’m Hungry lacks is progression, and that means you’ll have seen everything on the menu once you’ve completed the first level. There’s fun to be had, but this is more “value meal” than a full course.

Ron Burke is the Editor in Chief for Gaming Trend. Currently living in Fort Worth, Texas, Ron is an old-school gamer who enjoys CRPGs, action/adventure, platformers, music games, and has recently gotten into tabletop gaming. Ron is also a fourth degree black belt, with a Master's rank in Matsumura Seito Shōrin-ryū, Moo Duk Kwan Tang Soo Do, Universal Tang Soo Do Alliance, and International Tang Soo Do Federation. He also holds ranks in several other styles in his search to be a well-rounded fighter. Ron has been married to Gaming Trend Editor, Laura Burke, for 21 years. They have three dogs - Pazuzu (Irish Terrier), Atë, and Calliope (both Australian Kelpie/Pit Bull mixes).
Related Articles: I'm Hungry, Let's Play, VR
Share
Tweet
Share
Submit