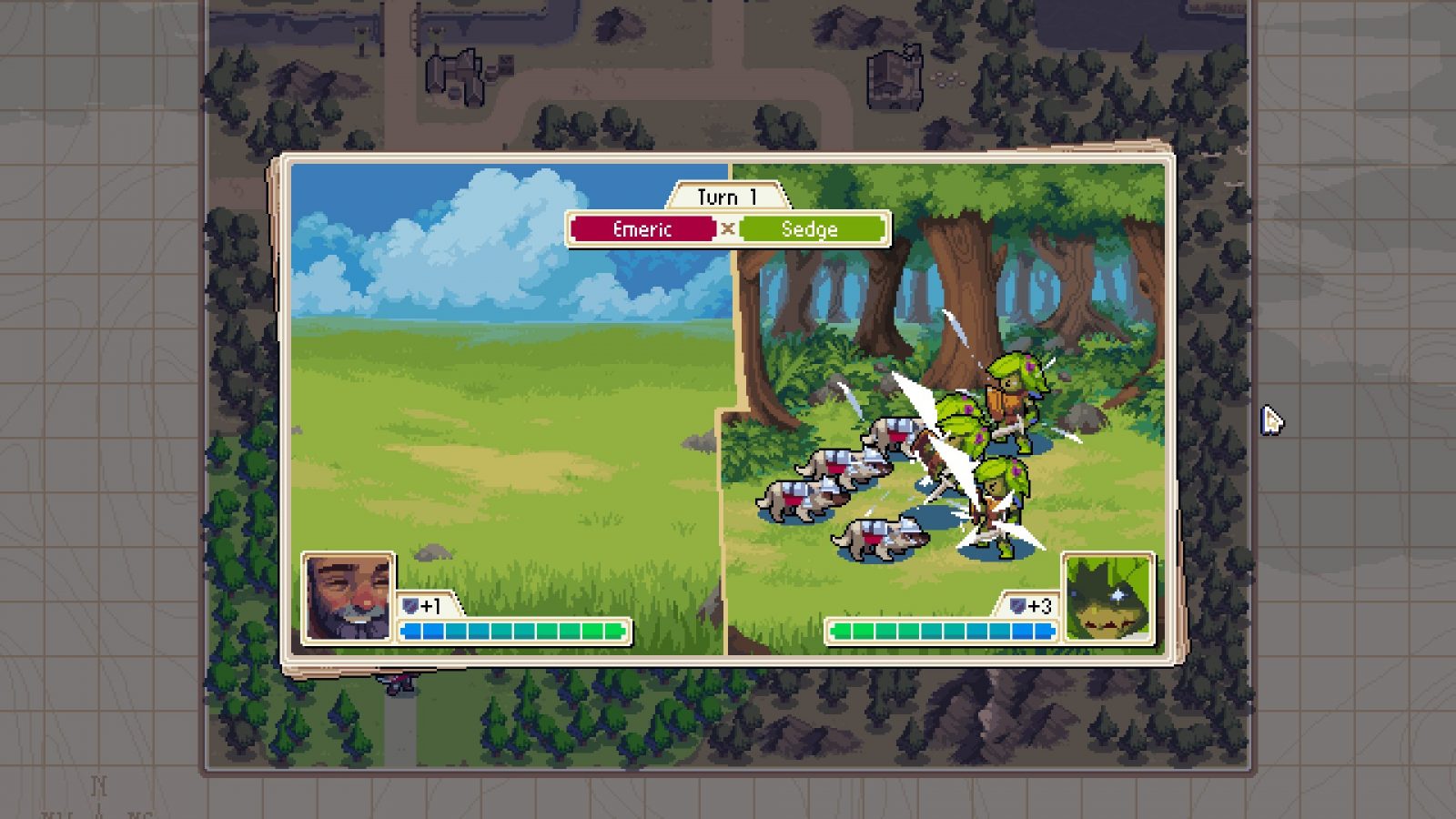 Developer Chucklefish seemed to go the “if it ain’t broke, don’t fix it” route with Wargroove. Anyone who remembers Advance Wars will likely be thrown headfirst down memory lane with their first look at the new strategy title, and the resemblances are more than just skin deep. That’s not necessarily a bad thing, though. Advance Wars is fondly remembered for a good reason, and Wargroove is clearly more homage than imitation, adding enough of its own spin on top of a solid foundation.

Wargroove’s gameplay will be familiar for strategy fans, as it asks players to build and move units across a map, usually to destroy the enemy’s stronghold or their commander. Units have some amount of rock-paper-scissors interplay between them, as each one does different amounts of damage to different enemy types. The most distinguishing feature of its combat is how it uses commanders. Each army’s commander is an actual unit in the battle with boosted stats and the ability to use Grooves, abilities that gain charge over time and let you pull off feats like healing comrades, absorbing enemies’ health for yourself, or calling in reinforcements at your position. The design of the commanders is great, even if their abilities can be a bit underwhelming. The star of the show is clearly Caesar, an adorable dog in a plumed helmet who barks orders to his crossbow-wielding bodyguards.

Wargroove also stands out among strategy games for its cutesy art style, which swaps Advance Wars’ colorful tanks and planes for a variety of medieval fantasy staples from knights and pikemen to dragons and golems. Each of the game’s four factions uses the same basic unit types, but with their own spin, replacing war hounds with skeletal dogs, for instance. It makes for a bright, chaotic battlefield, especially when there are more than two factions in a battle, but their designs are clear enough for the most part to be able to identify each unit’s role at a glance.

Don’t let those cute graphics fool you, though. Wargroove is a difficult, sometimes brutal, game. It starts out easy enough, with a few introductory missions that lay out concepts that will be familiar to even casual strategy fans, but all bets are off after you learn the basics. Through its main campaign, a fantasy story too bare-bones and generic to even recall, the game gets tough quickly and introduces plenty of variation to keep you from getting comfortable. Some missions task you with making your way around a map with limited troops or surviving wave after wave of enemies spawning in, while others just plunk you down in front of an overwhelming enemy force and send you after them. Aside from the main campaign, there are also plenty of side missions that let you control different commanders in a variety of missions. The scenarios the game sets up often push you to the very edge of defeat before you can pull off a victory.

It feels like it goes a bit too far at times, surprising you with powerful units when you’re on the cusp of a win or planting units in the fog of war that can spring out and devastate you in a single turn. With no way to save mid-battle and some missions taking upwards of an hour, one false move could lead to a very frustrating defeat. Wargroove does allow you to adjust how much damage you receive, how much gold you earn per turn, and how quickly your commander’s special ability charges. That doesn’t address the real issue, which is difficulty spikes. While some missions seem borderline impossible on the standard difficulty setting, others are easy to beat with the right strategy, so just turning down the difficulty means that some missions become a walk in the park.

A very long walk in the park, that is. Even for a turn-based strategy game, progress tends to be slow in Wargroove. Some maps, especially late in the game, are massive, and you’ll be moving units across them a few squares at a time. You can also only build one unit per turn for each barracks you have, so the game is more about slowly marching your units toward their objective than swarming enemy positions en masse. With the massive size your armies can reach in longer battles, each turn becomes quite drawn out, especially when you factor in the few seconds of animation for each attack (which you can turn off, but doing so makes it tough to tell exactly what’s happening on the enemy’s turn.)

Even aside from those considerations, Wargroove’s combat seems designed to be a slow, grinding process. With its crushing difficulty, you’re incentivized to be as defensive as possible, amassing units and keeping them well out of enemy range until you’re sure you can take an opponent down. The game also seems to be balanced against you ever getting the upper hand. Your flying units can do great damage from above without fear of retaliation from most enemies, but anti-air troops can usually reach just a bit farther than flyers can travel. The game’s titular Grooves all provide useful bonuses, but they’re fairly minor in effect, never strong enough to turn the tide of battle.

This slow pace of play and constricting sense of evenness between armies may be why I began to sour on the game around its midpoint. Even in battles where I’d fought to a point that victory was assured, I found myself not wanting to go through the motions of moving my pieces around the board. Part of that is because there’s a stretch of the game where every battle feels basically the same, as you just march your army toward your opponent’s army to reach their base. Late in the game, battles becomes much more interesting, as you gain new units, employ different strategies, and even control multiple allied armies across land, sea, and air. I never got tired enough of the game to stop liking it entirely, but I came close.

Even when Wargroove is at its best, there are lingering issues that introduce annoyance into its battles. You can’t see enemy ranges without clicking on them, for example. To see a unit’s vulnerabilities and attack strength, you have to click through menus with hard-to-read icons depicting each opposing unit type. There’s also no way to rescind an order to move if you misclick or a unit doesn’t end up on the square you expected after moving to attack.

Despite the myriad problems that make Wargroove a drag at times, it’s difficult not to be won over by it. There’s tons of charm in its character designs and simplistic gameplay, and it offers a full package outside of its campaign. There’s also an arcade mode, where you can run your commanders through a gauntlet of shorter battles, and a puzzle mode that challenges you to win a series of meticulously constructed scenarios in just one turn. The game also features a multiplayer mode and a surprisingly full-featured set of creation tools that let you build entire custom campaigns (cutscenes and all) and share them online. If you get into its groove, this game will offer enough to keep you in the fight for a long time to come.

Wargroove has the confidence to stick to simple, familiar gameplay with a few twists, rather than try to wow you with its novelty. While its charming graphics might make it look cute, it offers a vicious challenge that gets a bit uneven at times. If you get into its slower pace and high difficulty, it also offers plenty of alternate game modes and custom campaign creation tools to extend the fun.

Wargroove has the confidence to stick to simple, familiar gameplay with a few twists, rather than try to wow you with its novelty. While its charming graphics might make it look cute, it offers a vicious challenge that gets a bit uneven at times. If you get into its slower pace and high difficulty, it also offers plenty of alternate game modes and custom campaign creation tools to extend the fun.

A committed indoor kid, Bryan moved from Pittsburgh to Los Angeles for a prettier landscape to ignore. They can be lured outside with promises of taco trucks and film festivals, and enjoy trawling through used book stores for works on the occult. Bryan has been gaming since the SNES era and is a sucker for good pixel art.
Related Articles: Wargroove
Share
Tweet
Share
Submit