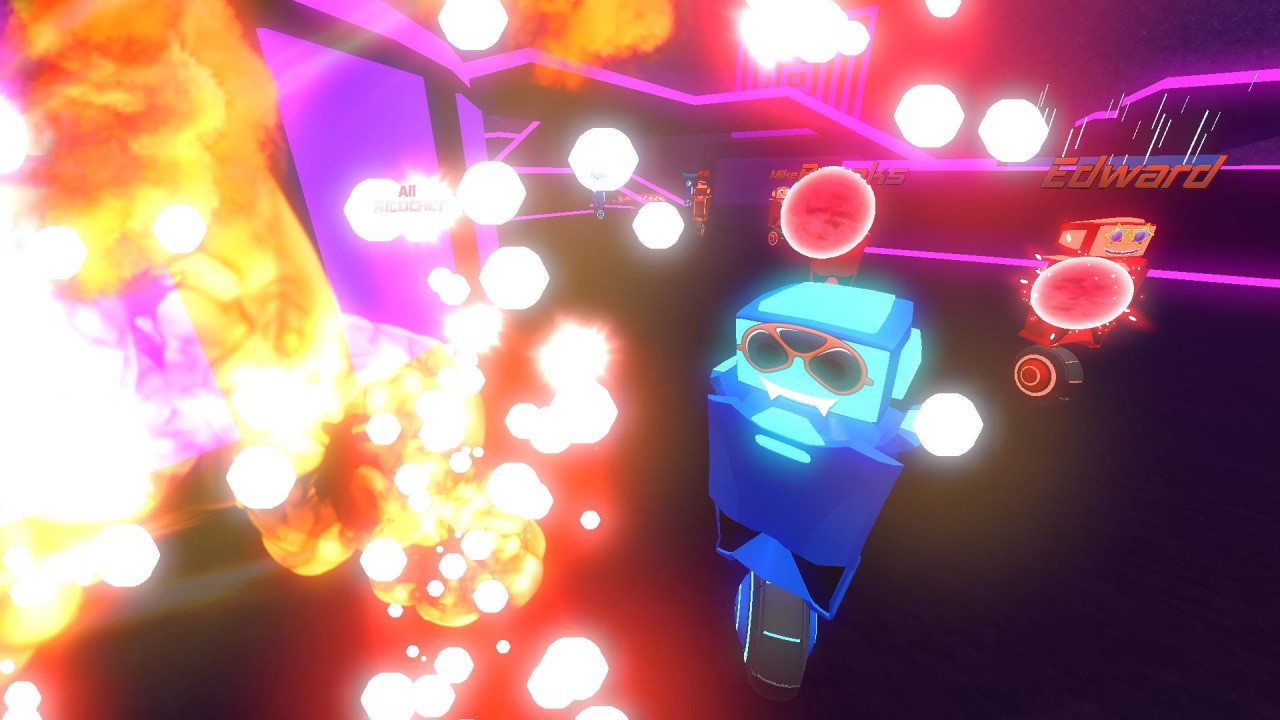 When I hear the words Dodgeball, I think back to my high school days; the smell of the school gym, the sound the rubber balls made on the floor, and the built up rage behind each jock and bullies eyes as they full on sprinted towards the line of circular projectiles. For some, dodgeball was a game filled with enjoyment, for others it was a game built on fear and pain. The fine folks at Zen studios took this controversial sport and flipped it on its head. Disco Dodgeball Remix mixes the gym class classic with an intense arena FPS, Robots, and bumping EDM tracks.

At first glance, the game is pretty straight forward. Giving you a quick tutorial on how the game works and its controls. Although very simple, I was surprised at how fast paced and insanely fun this game is. You control a robot avatar through various brightly colored arenas, where your goal is to pick up disco ball dodge balls and hurl them at opposing robots.

Disco Dodgeball Remix has a vast amount of unlockables/collectables and things to do. Through every game mode or match you play, you are awarded experience points that go towards your profile score. With each level up, you are given a gift that contains a random cosmetic item. The cosmetics allow you to customize your robot with various Hats, glasses, heads, bodies, wheels, and decals. All though there is no story, all the unlockables help to give the game a great depth, and gives players something to strive for while playing. There is also a mission ranking system, that provides the player with challenges to complete. When completing the mission challenges you get mission points that boost your ranking, and can potentially unlock more collectables.

There are so many different game modes to play including an arcade, challenge, bot match, and online mode; totaling to about 30 different ways to play Disco Dodgeball. The arcade mode is a wave type game style. Waves of enemy bots come at you in randomize stages, and sometimes with power ups or perks to give them an edge. As you play through stages in arcade mode you will eventually be met by a boss bot that has their type of power up, and more health than the regular bots. The challenge mode brings 8 different game modes to play, all of which are fairly quick, but extremely fun. The bot matches are geared towards playing with more people either locally, online, or against AI bots. The bot matches have games like capture the cube (flag), team race, and many more interesting game modes. All of the various games and play styles take place in one of the 15 levels available to play. All the levels range in size, with their own unique layout.

Since all the rewards are cosmetics for your robot, Disco Dodge Ball’s difficulty is based off how good you are as a player. This means the only way you can get better at the game is to play more. I noticed that even as I was getting better at the game, some of the AI were still out maneuvering me. This was nice to see as the robots all have smiling simple faces, but were pretty smart and didn’t follow a direct pattern. There were many times I thought that I had out played the computer when out of nowhere the opposing bot would make a quick dodge and send a ball quickly at me.

Being called Disco Dodgeball, I expected a lot more disco music. Instead I was created with and upbeat and heart pounding EDM soundtrack. The music plays throughout the whole game and never skipping a beat. I enjoyed the ongoing music as it kept me into the game weather I was playing an intense match, jumping between game modes, or customizing my robot. Another interesting aspect of the game is how the music plays into the arenas. As the beats build and change, so does the color and lighting of the stage. At times it felt as though I was in the club scene for John Wick, but instead of bullets flying at me, it was brightly colored balls of death.

Overall I loved Disco Dodgeball Remix. This wacky FPS dodge ball game keeps the fun coming with various game modes, high intensity music, and extremely entertaining gameplay. Although the art style looks a bit childish, it works for this game. Disco Dodgeball is a great game, and if you pre-purchase the game in the Nintendo eshop you can get the game for 20% off!

From Southern New Jersey, Shaun has always been a huge fan of video games as well as nerd, geek, and pop culture. No matter the topic of conversation, Shaun can always find a way to slip in a movie or TV quote to get a laugh. When he is not playing games or watching shows, Shaun works as a substitute teacher during the day and as a bartender at a local brewery on nights and weekends.
Related Articles: Disco Dodgeball Remix, Indies
Share
Tweet
Share
Submit