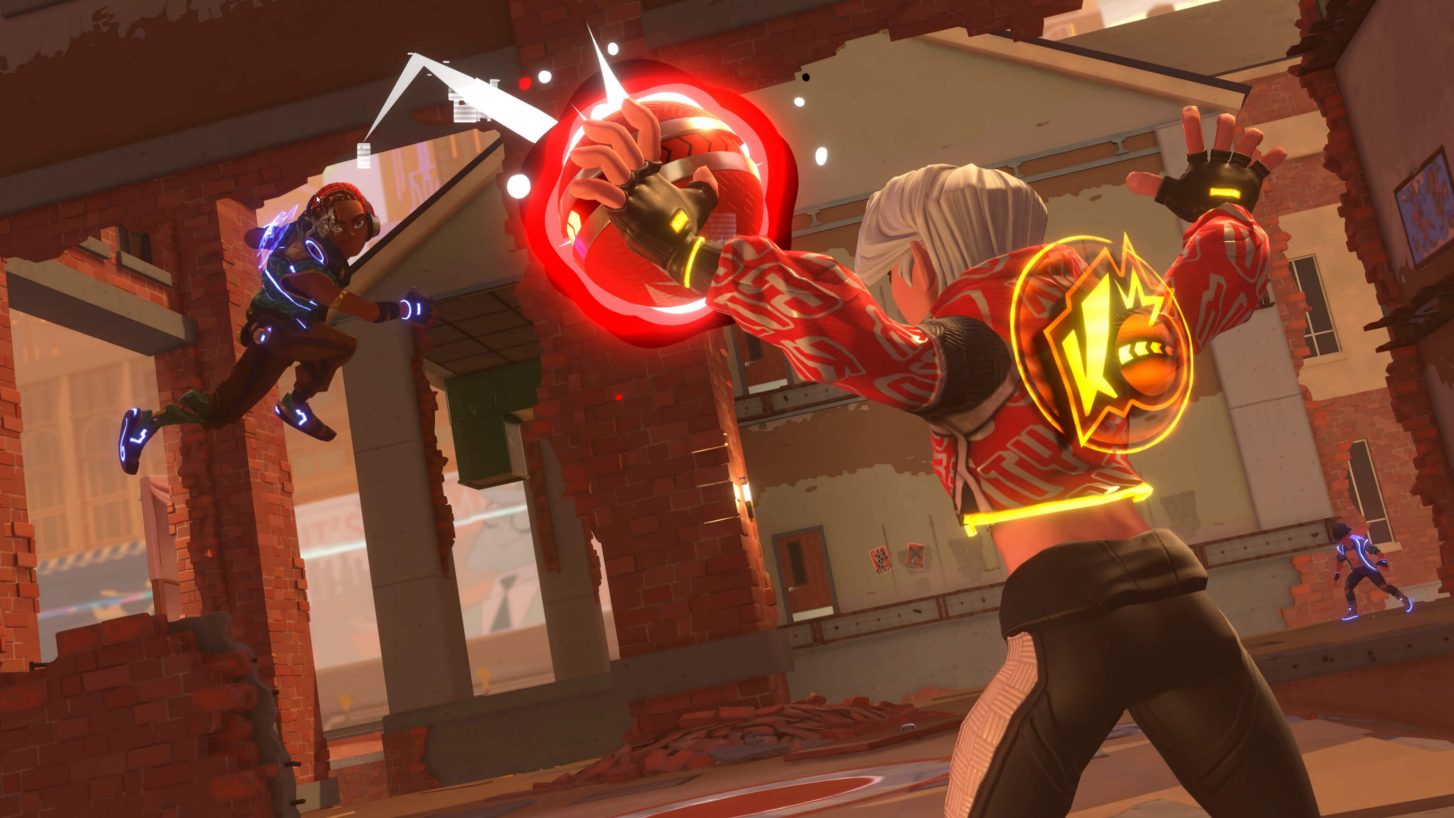 Like a dodgeball to the face, Knockout City knocked me off my feet in seconds and I never saw it coming. From the awesome, cheesy premise to the airtight dodgeball mechanics, Knockout City culminates into a ultra-polished and addictive competitive game that’s worthy of mentioning in the same breath as Rocket League. Even if it has a few bugs to crush and lots of room to grow in the way of content, it’s clear that Knockout City will have a regular spot in my rotation of competitive games I play with my friends.

Knockout City is a team-based competitive dodgeball arena decorated with a bizarre futuristic greaser vibe. In this strange world of flying cars and enormous skyscrapers, crews compete in over-the-top dodgebrawl battles for supremacy. Learning how to play only takes a few minutes, but what makes Knockout City truly special is that mastering it can take dozens or even hundreds of hours. Over my ~30 hours of dodgebrawling so far, I’ve gone from understanding the basic concepts and winning a few casual matches to diving into some incredibly sweaty ranked matches where advanced strategies were absolutely necessary. 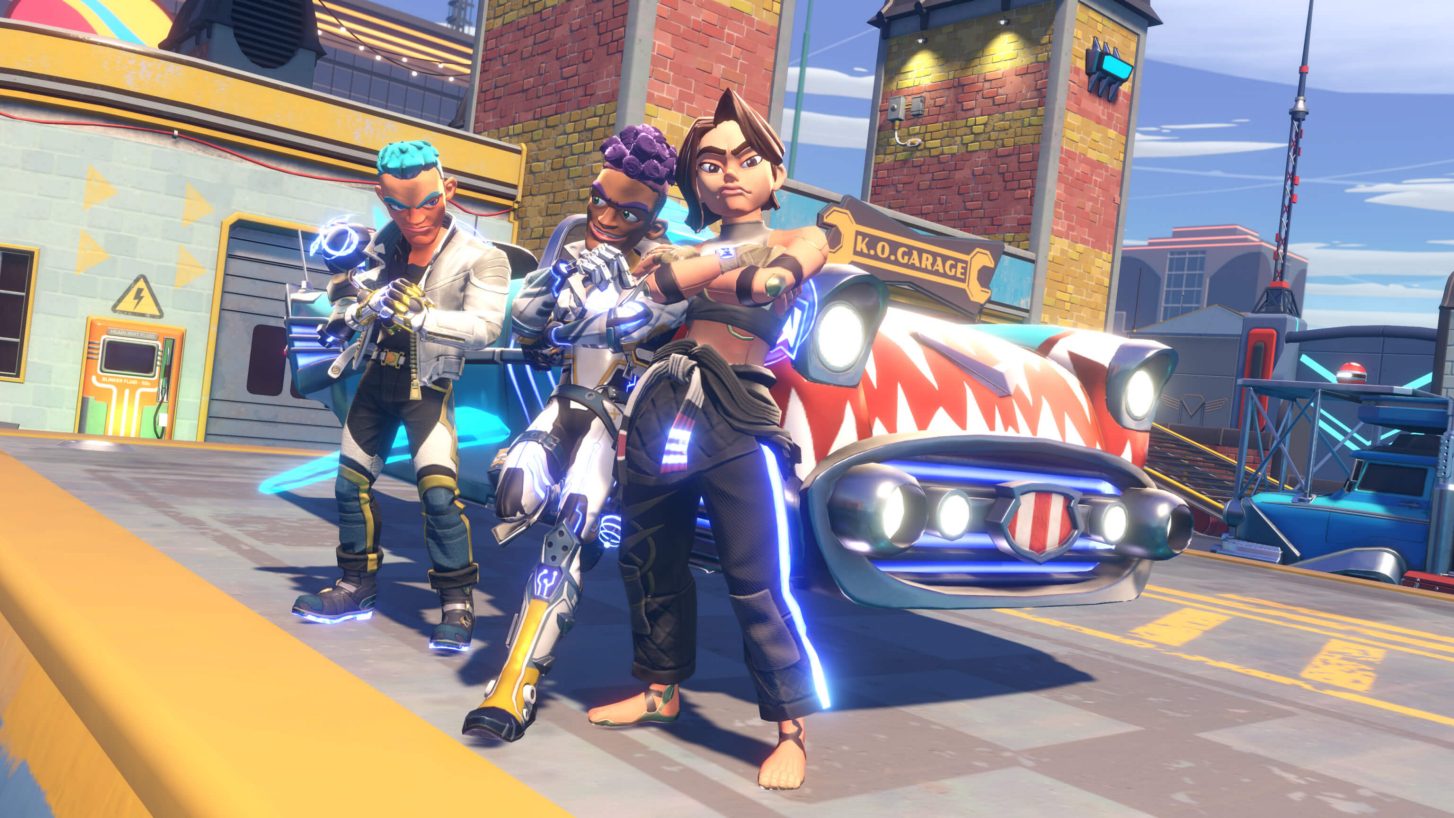 The options in your dodgeball toolbox seem limited at first. You can dodge, catch, and throw balls to outmaneuver and knock out your opponents. But then there’s a few early tricks, like the ability to curve balls around corners or lob them over obstacles to hit players hidden behind cover make you feel like a saucy little so-and-so. There are also a few special ball types to mix things up, like the bomb ball that explodes after a certain amount of time like a high-stakes game of hot potato, or the cage ball which traps those hit with it into ball form.

The longer you play, the more layers of strategy reveal themselves. You can fake a throw to trick an opponent into flubbing their catch early, or pass your ball to an ally that’s standing behind the player instead, who can tag the enemy while their back is turned. By rolling into ball form you can have a friend throw you at the enemy to knock them out in a single hit. Even better: they can charge you up and throw you straight into the air, giving you an opportunity to crash down on the enemy’s heads causing an enormous explosion.

The amount of depth in Knockout City is astounding and the balance feels welcoming for junior players while still being nuanced enough to keep veterans around for a long, long time. The first time an opponent stood right in my face and curved a ball behind my head to hit me where I couldn’t defend left me speechless. The first time I caught an enemy who threw themselves at me in ball form and tossed them off the cliff was pure euphoria.

But as a live-service game with its first season already underway, Knockout City could use a little more depth in one department: content. With only 6 maps and a handful of game modes in rotation, you’ll spend a lot of time doing the same things and that can become a bit monotonous. Don’t get me wrong: all the maps are extremely well-balanced and unique, it’s just that you’ll quickly come to know them very well. The game modes on the other hand are more of a mixed bag. The core Team KO mode is clearly the most put together, while some modes like Ball-Up, which has no balls and forces you to use fellow players as ammo, feel a little more chaotic and tacked on. Even when I ventured into some of the better alternate game modes like Diamond Dash (a “kill confirmed” type mode) or Face-Off (straight up 1v1 matches), I quickly tired of the gimmicks and went back to Team KO. 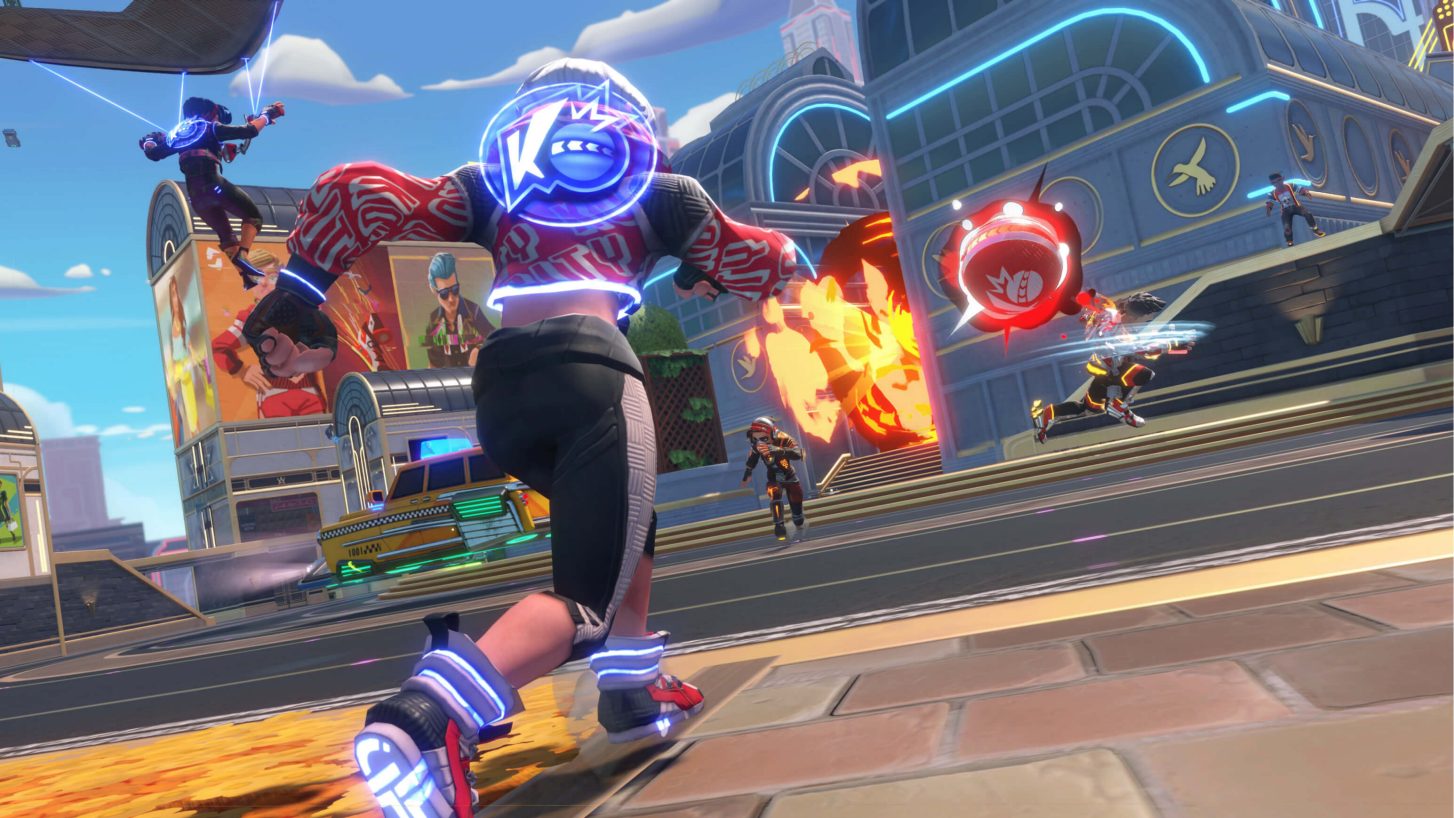 It helps that Knockout City is an effortlessly charming game. With a futuristic 1950’s greaser vibe, the setting is an over-the-top mishmash of science fiction, high school culture, and unabashed corniness. It’s truly bizarre, but it works, and I immediately understood the fantasy of being a badass high school student in a leather jacket hanging out by an old-style jukebox, ready to destroy a rival gang in a game of dodgeball.

As you play, you’ll unlock cosmetics like intro animations, taunts, outfits, equipment, and gear for your avatars. There’s also an endless checklist of challenges that award XP and unlockables to grind for, though randomized drops can be a bit lackluster. Worse still, the Brawl Shop, which allows you to purchase specific items each day, has a very limited inventory, meaning you’ve gotta grind and depend on pure luck to make your avatar look and act like you want them to during cinematic flaunts before and after a match. But it’s great that Knockout City gives you so many reasons to continue playing. Completing challenges, leveling up, and unlocking new ways to dab on your enemies’ corpses is quite habit forming. 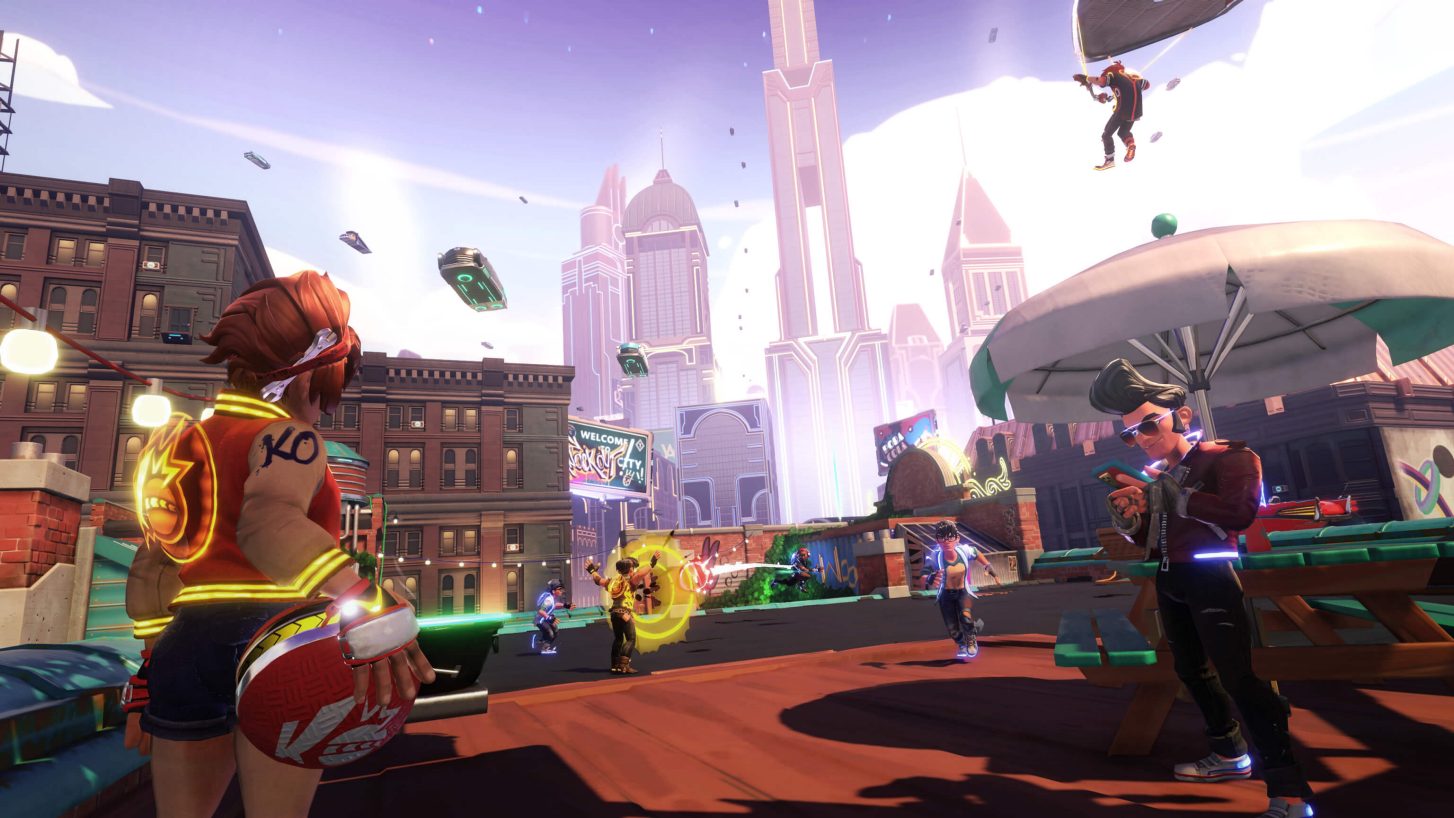 Knockout City has a bit of room to grow in the technical department, which is certainly one of its weaker elements. Every match starts with a little of rubber-banding, and sometimes the issue persists well into the matchmaking making games nearly unplayable. Occasionally I joined a match and never spawned on the map, eventually getting booted and penalized for inactivity. And worst of all, making a “crew” — the in-game friends list and system for you and your friends to rally around — is a buggy mess. So much so that my friends began to learn bizarre workarounds for successfully adding a friend to our crew or getting them to show up on our friends lists. That said, the technical hiccups were rarely enough to put a damper on the overwhelmingly good times we had.

It’s also worth noting that Knockout City supports crossplay between every platform it’s available on — something that plenty of games struggle with that have been around a lot longer than Knockout City. Even if it may be to blame for some of the technical challenges, crossplay is worthy of praise simply because it removed so many barriers from playing with my friends that are scattered across every platform under the sun.

There are few games that have ever made me scream in anger or shout with unbridled joy as often as Knockout City and I absolutely can’t stop playing. It’s a near-perfect team multiplayer game packed with strategy, heart, and an incredibly impressive level of polish. Even if it’s a bit buggy and lacking in content at the moment, I can’t recommend it enough.

You know that jerk online that relentlessly trash talks you after every kill? That guy was probably Travis "Tie Guy" Northup. Competitive, snarky, and constantly wearing a tie, Travis has been writing his opinions about electronic media since he was a teenager, and is pretty much the only person to hold his opinions in high regard.
Related Articles: Knockout City
Share
Tweet
Share
Submit