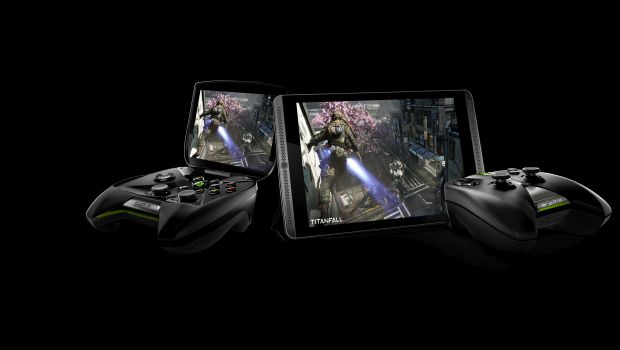 Ever since humans started valuing gold, they have been looking for ways to get more of it. Of course the normal way of digging in the ground, and then the whole processes of smelting the precious metal is obviously too cumbersome. Instead, many people have spent a significant amount of time thinking about how to acquire gold from other sources. Sure, to our educated perspective, this is a fool’s errand; but, in the age where physical chemistry was not well understood, turning lead into gold was the ultimate goal of Alchemy.

As of this posting, Knapsack games is looking for support to fund their latest design: Apotheca, The Secret Potion Society. This is a review of a pre-production prototype of the game, so the included images are of inferior quality to the planned components, however the gameplay and rules are representative of the final product. If you are interested in more about the project, more can be found here.

Apotheca introduces players to a place where Alchemy is still king, and the race is on to become the best Alchemist in the land. Players will utilize diverse apothecary personalities to perform various experiments perfecting their craft. Ok, that is about as far as I can go with the theme. Apotheca is an abstract strategy game. Sure the theme adds to the mystique of the art and the ambience of the board; but, the game is really just about pattern management and hidden information. I don’t mind the alchemy theme. In fact I think they got it just right, not too much to get in the way of the straightforward game play and not too little to make it bland.

The focus of Apotheca is the board where various potion cards are going to be placed and moved around in a four by four square grid. The potion cards come in three different colors: blue, red and green. The goal of the game is to arrange, or flip, a set of cards to form a line of three matching potions. Assuming the player has an apothecary to claim this result, the set is scored and removed from the board. Once a player has done this three times, the game is over with that alchemist being declared the winner.

On their turn, each player is allowed to perform two different actions. One thing that can be done is to restock the board with potion cards. If there are less than three face down potion cards, a player can draw a potion card, look at it and place it facedown anywhere on the board. This is repeated until there are three face down cards on the table. Another action that can be performed is for the player to flip over a face down card. If the card that if flipped completes a line of three portions of the same color, it can be scored. In addition the player immediately gains a gem corresponding to the color of potion flipped.

The last two actions revolve around the various apothecaries a player can use to manipulate the board. Each apothecary has an associated power that can be used. These powers all revolve around moving or switching potion cards. For example, one personality allows the player to move any card in an ‘L’ pattern (al a knight). If the outcome of a apothecary’s power also satisfies the three-in-a-row goal, that set can be removed and scored. These are the two primary ways for scoring sets, either flipping cards or moving them around. The only other action a player may perform is turning in gems to hire a new apothecary personality. Play goes back and forth, each player taking two actions, until one player has scored three sets. This player is obviously the best alchemist and the winner.

As this game has yet to be produced the components I played with, and are showing here, are prototypes. Even if the fully produced game is of equal quality to this prototype, I would be happy. The art looks fantastic and immersive, and the components, while understandably a little rough, are still good quality. The rule book is straightforward and helpful. My only complaint is that I wish they did a better job outlining the rules of the various alchemists. There were some times where we wanted to look at a clarification and the rule book only showed the same text on the card. I am guessing this is something that will be addressed as the game gets closer to printing. Overall The game is easy to teach and easy to learn. 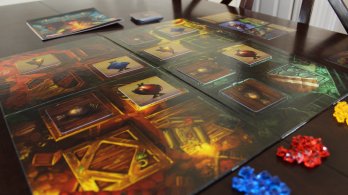 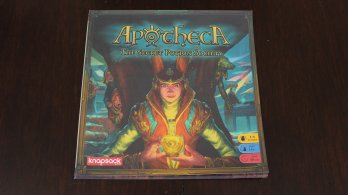 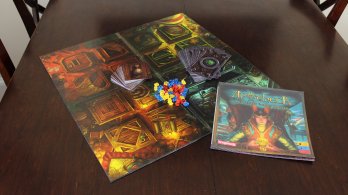 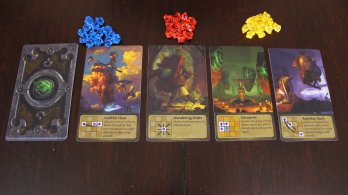 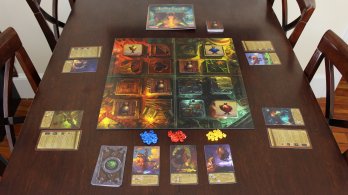 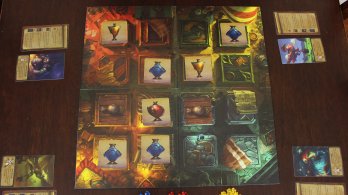 The aspect I enjoy most in Apotheca is the balance between beneficial actions for you and preventative actions against your opponent. When considering a move, the utility to both you and your opponents must be assessed. Sometimes you will be able to figure out a great strategy for getting a three-in-a-row set, but then you realize you opponent might be able to snag the points before you get there. This games does a great job capturing that tension for such a simple rule set.

Speaking of rules, I always love a game that is able to achieve depth of strategy without complex or convoluted rules. Apotheca is able to deliver on this. Living up to the standards of great abstract games before it, this game offers a complex and interesting game state while still being accessible for a wide range of players. Every game feels very different due to the different apothecary abilities and the random distribution of potion cards.

The three and four player game might be salvageable; but as they are currently written in the rules they do not seem all that compelling. With more players there seems to be a significant advantage to the person/team who is able to get their first set. Once they start this rhythm, it is hard for the other players to interfere all that much. The game is not unpleasant, it just seems unbalanced and chaotic. It is more than possible that between now and the release of the game Knapsack will address this, so keep your eyes open.

The way cards are added to the board adds a memory aspect to the game that I particularly enjoy. When there are more cards on the board your opponent will have an advantage based on an abundance of choices, however only the person who is placing cards knows what the colors are. This balance is really fun to play around with. If you wait too long in restocking the board then your opponent gets to know more about the hidden board state. But if you are constantly adding one card at a time you limit your own knowledge of the board state. The card placement, along with rewarding players for flipping cards, do a lot to move the game forward at a good pace.

If this sounds interesting, go check out the Apotheca KS page. You only have until July 9th.

If you are looking for an interesting two player abstract strategy game, I highly recommend Apotheca. Sure the theme is light, but the game shines with a straightforward rule set that leads to deep and satisfying play. I particularly enjoy the challenge presented by the various apothecaries in how they manipulate the cards. You may not be able to make gold out of thin air, but you can certainly back this game. Right now!

From Trading in the Mediterranean to FPS, I love games. While I grew up in a house without consoles, PC gaming and board gaming were a large part of my formative years, and continue to influence my life. In this golden age of board gaming, I have jumped in headfirst in to anything table top. As a ludilogical student, I love thinking about how games work, their mechanics, their elegance and most importantly, enjoying how fun they are. Favorite Board Game (at the moment): Twilight Struggle Favorite PC Game (base solely on play time): Tie between WoW and DII Fell free to email me: comments, concerns, questions, feedback, rants, and/or suggestions.
Related Articles: Apotheca, Tabletop
Share
Tweet
Share
Submit