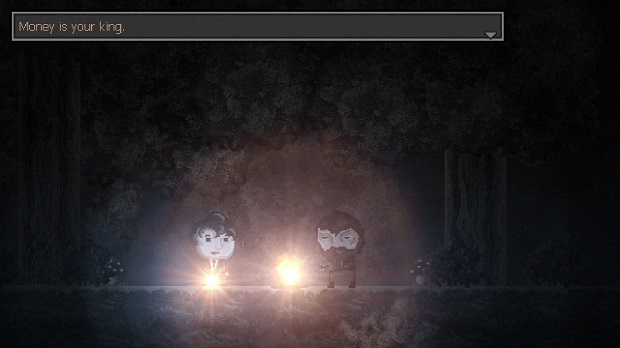 Sometimes a story can be simple, or have elements that are predictable, but the way that it’s told makes it come alive. That is how DISTRAINT struck me; it might seem like a fairly straightforward game, but it really does have its own personality.

DISTRAINT is a 2D adventure game about a man named Price who is working for a company that seizes people’s property. If he wants to earn a coveted partnership with the firm, he must take on some of their most difficult assignments: kicking an elderly woman, a recluse in the woods, and a drug addict out of their homes.

The clear theme of DISTRAINT is the distance between greed and humanity. However, Price is never really portrayed as a villain. He isn’t chasing exorbitant riches; the most he wants is a coffee maker that works and a home without leaks on rainy days. His basic desires, rather than a hyperbolic chasing of wealth, shift the game to a neutral perspective that allows you to sympathize with both Price and the victims of his line of work.

The jerks he works for, on the other hand…

Though DISTRAINT is described as a psychological horror game, it’s not in your face enough to terrify you or inspire nightmares. Instead, it uses horror elements to represent his guilty conscience. Sure, blood dripping and television static are on the cheesy side, but they’re also effective within the context of their scenes.

Some recurring elements are visits from the ghosts of his parents and the appearance of a bloody elephant. Again, on the surface such things might seem unremarkable, but the way they’re handled is what gives them an impact. Part of this is due to the sound effects.

This is only the beginning of your downward spiral.

The sound design in DISTRAINT is brilliant and builds a tense, haunting atmosphere. Disturbing noises, dramatic music, and other small cues construct Price’s world, underscoring the moral bind he’s found himself in. The artwork is pretty standard fare, and the story presents a common dilemma, but it’s the sound that pulls this game together and makes it shine.

Most of the story is focused on seizing the three properties, but there are a few sequences mixed in that further showcase the depravity of the world. For instance, at some point Price has to visit a nursing home and, while there, he inadvertently uncovers some of their horrifying secrets. The residents have been subsisting on a diet of potatoes, but if they want a bit of meat, it comes at a price.

There are some happy moments, though. Like fixing the TV so the old folks can watch their shows.

To make progress in DISTRAINT, you have to complete puzzles in each area. Many of them are simple, such as retrieving logs and kindling a fire for the man who lives in a cabin. Unlike a lot of other titles that involve finding and matching up the correct items, the puzzles aren’t frustrating and seemingly non-sensical, but they also aren’t dull.

Some of the puzzles are even quite clever and enjoyable to solve. I really liked using a mysterious green substance to shift between dimensions at the druggie’s place. It required a certain amount of skill at timing to weave through the maze of boarded up doors and holes in the walls before the drug’s effects could wear off.

I really liked the way Price’s stress-induced dreams flowed through the narrative.

The ending was gripping, holding a dark twist I didn’t see coming at all. Then when I took some time and thought back to the beginning, I realized the conclusion made the game come full circle. Going into much more detail would spoil it, but suffice it to say it was excellent.

It’s hard to come up with criticisms for DISTRAINT. I do wish the game would’ve been a bit longer; my playthrough clocked in at less than three hours, and that includes getting foolishly stuck in a couple of spots. This isn’t even in regards to the price, because I feel that $4.99 is very reasonable for what you get. I just wanted to spend more time with the game, and I think that at least a little more content could’ve been added without it feeling like fluff.

DISTRAINT is a great experience that I definitely recommend. For those with an impressive game backlog that might shy away, it can be knocked out in just an evening, and it gives you plenty to chew on when you’re finished.

Though it may look like nothing special on the surface, DISTRAINT is a worthwhile adventure game about the toll greed can take. Horror imagery is used to display the main character’s all-consuming guilt, and the smart sound design amplifies it perfectly. While the story isn’t especially long, it’s absorbing and gives you a lot to think about.

Sarah Marchant is an office admin for a nerdy t-shirt company. She has a soft spot for indie games, a passion for story-driven titles, and a weakness for cooking games and anything with zombies.
Related Articles: DISTRAINT
Share
Tweet
Share
Submit