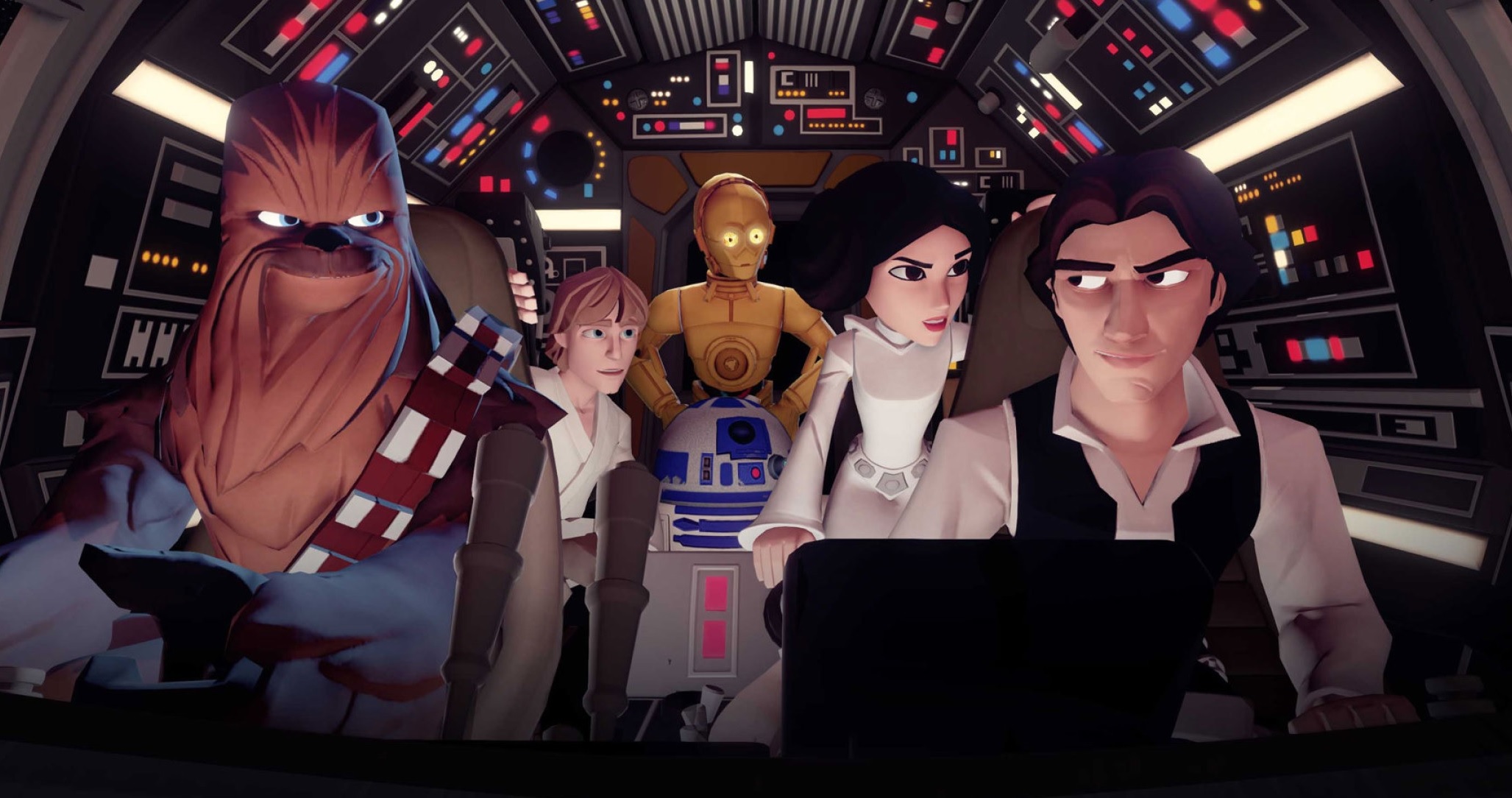 I’m gonna start off this review with an odd angle. Bear with me and it’ll all make sense. My wife and I have decided to sponsor a kid. He’s 16 years old and,despite the fact that Star Wars is popular enough to have spawned its own real-world religion, Seth has never seen any of the movies. In a way, I envy him. He gets to experience the magic of Star Wars for the first time. It does raise the question, though — in what order should he watch them?

The Disney Infinity team answered this in the order they released their playsets. Chronologically, the game follows the movie from Episode 1 through Return of the Jedi, each respective playset breaks up the story into separate chunks to experience. It doesn’t follow canon exactly, mostly due to the 4-player nature, but it does hit the broad strokes. It’s not a replacement for the movies, but it did something I’ve been trying to do for a while now — Seth now wants to watch Star Wars.

When the Dark Lord of the Sith speaks, you listen.

The Rise Against the Empire playset features a young Luke Skywalker and a bun-haired Princess Leia Organa. Han and Chewie join them on their fateful bid against the Galactic Empire, but you can also unlock and use your other Star Wars characters as you find their respective tokens in the game. The base playset (Twilight of the Republic) has a pair of crossed light sabers as their play set piece, but the just-released Rise Against the Empire features the iconic Death Star as its symbol. All in all, most of us old-school folks were waiting for this playset.

While some liberties were taken to incorporate Chewie, Han, Luke, and Leia into the same scene (as well as C3PO and R2-D2) the game starts as the droids are jettisoned onto the sandy planet of Tatooine. This playset covers three of the most recognizable areas in the series — Tatooine, Hoth, and Endor, as well as the space above those planets.

“I used to bullseye womp rats in my T-16 back home, they’re not much bigger than two meters”

That the original three movies (IV, V, and VI) didn’t have the same incredible CGI that the first ones (I, II, and III) did, but the storylines were more cohesive and far more compelling.  This holds true for the games as well.

Rise Against the Empire improves greatly on the vehicle sections, making the space and ground combat far more engaging, and simply more fun. The variety of vehicles is greatly improved — I never imagined I’d enjoy running over Storm Troopers with my Bantha as much as I do. The Millennium Falcon and X-Wing sections still feature solid acrobatic combat, but now there are additional objectives like defending capital ships or evading asteroids.

One of my complaints with the previous playset was that Obi-Wan and Anakin felt very similar, eschewing ranged combat for an all-melee saber-fest. In Rise Against the Empire, Luke has both a blaster and his saber (before he’s actually given it by Obi-Wan, funny enough), allowing players to juggle enemies. Leia doesn’t have the same saber skills, naturally, but she is fairly acrobatic, able to knock foes off their feet rather easily.

He’s about to let the wookie win, he just doesn’t know it yet.

Without a great deal of jumping off the narrow path, you can beat Twilight of the Republic, allowing players to ditch side content if they are so inclined. The team decided to corral the player a bit more this time around, requesting the player collect enough funds to buy certain buildings or pay off overdue debts. This pushes you to see some of the goodies like the Sarlacc Pit, hunting down a rare artifact for a certain giant slug, doing your best Grand Theft Auto impression on an AT-ST, or running around on Tauntauns — all of which you might have missed if you didn’t need to snap up additional cash.

Playing cooperatively still causes the occasional hitch with the camera as both players swing their cameras around during splitscreen. Every once in awhile you’ll see a framerate hiccup during a save sequence, the engine handles the wide open spaces and face pace very well. Just like the vehicles, the variety of things to do in Rise pushes it well above Twilight.

“You’re my only hope! Except for everyone else who’s helping. But other than them, yea, only hope.”

There’s one aspect that I really didn’t cover in my initial review that, in retrospect, I felt was a pretty large miss on my part. I discovered it after the review was published, but more accurately I discovered it when I started thinking of which characters I’d like to display on my desk. As I laughed to myself I realized the most obvious thing of all — these are toys.

The quality of the figures are, frankly, incredible. The cast resin has detail far beyond what you might expect. Leia’s individual fingers are molded, and the expression on her face is expertly painted. Vader’s cape is flourished behind him, his arm outstretched in a “I find your lack of faith disturbing” sort of pose. It would have been very, very easy to go with a simpler mold with less detail. That’s not what Disney and Avalanche Studio did here, and we are all the beneficiaries of that effort. These toys are top notch, and look fantastic on my shelf.

Rise Against the Empire

If you are an old-school Star Wars fan, this is a no brainer. With tighter controls in flight and on the ground, and a larger variety of activities and locations, Rise Against the Empire knocks it out of the park. This pack features the best of the movies (so far), the best cast of heroes, and is the most fun I’ve had with the toys-to-real-life genre yet!

Ron Burke is the Editor in Chief for Gaming Trend. Currently living in Fort Worth, Texas, Ron is an old-school gamer who enjoys CRPGs, action/adventure, platformers, music games, and has recently gotten into tabletop gaming. Ron is also a fourth degree black belt, with a Master's rank in Matsumura Seito Shōrin-ryū, Moo Duk Kwan Tang Soo Do, Universal Tang Soo Do Alliance, and International Tang Soo Do Federation. He also holds ranks in several other styles in his search to be a well-rounded fighter. Ron has been married to Gaming Trend Editor, Laura Burke, for 21 years. They have three dogs - Pazuzu (Irish Terrier), Atë, and Calliope (both Australian Kelpie/Pit Bull mixes).
Related Articles: Rise Against the Empire
Share
Tweet
Share
Submit