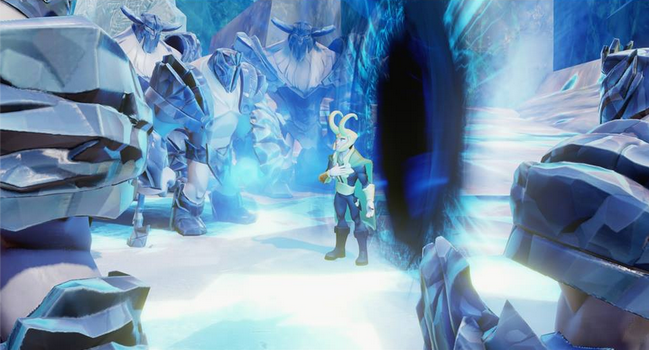 Disney Infinity: Marvel Super Heroes takes the tried-and-true formula of the toys-to-life genre and builds it out to Hulkish proportions–unfortunately, this behemoth is mostly full of hot air.

Despite increasing its character count and the amount of in-game items you can mess around with in the toy box, there is little to do in Infinity 2.0. That could all change as the community digs into the toy box creation tools and begins sharing their masterpieces, but as it stands, the starter pack is pretty bland.

Disney Infinity 1.0 released its starter pack with three unique worlds to explore–Monsters University, The Incredibles, and Pirates of the Caribbean–all with different mission types and gameplay hooks. The Avengers is the only play set available with the starter pack (Spider-Man and Guardians of the Galaxy play sets available for separate purchase) and it is a generic, empty and poorly-rendered version of New York that doesn’t capture any of the excitement and liveliness that the Big Apple has to offer.

The city of New York has been taken over by Loki and his legion of Frost Giants. Using an over-sized snow machine, the trickster god has blanketed the city in a thick layer of ice. You are tasked by S.H.I.E.L.D. to stop him at all costs. Supposedly, the city is in danger, but you’d never know it from how its inhabitants react to what’s going on in the streets. They walk around, completely devoid of any character or emotion, and it makes the city feel lifeless, and, ultimately, boring. I know they’re supposed to be toys, but that’s a lame excuse for not having interesting and fulfilling characters inhabiting the playspace.

To save these ungrateful citizens from their own demise, you must accept missions from a select few quest givers. Led by Nick Fury, said quest givers send you out on varying mission types, and when I say varying, I mean three: defend a point from waves of enemies for a certain amount of time, go to a specific area to defeat a set amount of enemies, and escort citizens to a waypoint. The Avengers play set has little to offer and is quite literally a frozen wasteland for content. Everything about it is just plain dull–from it’s gray, undetailed city to its uncompelling NPCs, story and mission structure–it is not a world worth saving. As far as I’m concerned, Loki can take the damn thing.

Nevertheless, throughout its measly 5-hour campaign, you have to engage enemies in these repetitive combat sequences. Each character packed in with the starter pack–Thor, Iron Man and Black Widow–has a limited set of attacks; ranged attacks; and a super move. All of which are deployed the same way, and none of which feel very different from the others. Thor is the only character that you could argue plays a bit differently. His hits seem more deliberate and pack more of a punch, and his super move does look pretty awesome has the ground quakes under his thunderous, lightning-infused Mjolnir.

The combat would be tolerable if it was at all responsive. What pushes it over the edge of insufferability is the incredibly frustrating delay between player input and on-screen action. Press attack four times; your character attacks four times. You can’t stop it. You can’t dodge. You just have to let the animation finish. Not being able to dodge attacks in time led to more unnecessary deaths than Tony Stark had unwitty wisecracks. Not to mention the camera. Oh God, the camera. The panning is unbelievably slow and makes the already-tough-to-dodge attacks nearly impossible to see coming.

Combat aside. The platforming is just as clunky and limited as in Infinity 1.0. The puzzles are non-existent. The vehicles … well, for your own sake, don’t drive them. Unless you like the idea of spending all your time in reverse after having crashed into a building because of its terrible steering that lacks any finesse whatsoever. Luckily, Iron Man and Thor can fly, and the flying actually works. It’s too bad that your destinations end up being a complete disappointment.

New to the Disney Infinity universe, you can now access a character skill tree to unlock varying stats and perks, like a damage boost for Thor’s ground smash, or dual pulse bolts for Iron man. The tree branches off in four directions with diverging paths to upgrades in health, damage, range and special move. At the end of the campaign, I unlocked about 20 upgrades between all three characters, leaving more than about two-thirds of the tree left to be unlocked. After taking down the final boss, the city opens up for free roaming and a chance to increase your characters’ levels even further, though I don’t know why anyone would want to spend more time there than they had to.

As far as the characters themselves, the real-life figures are as fantastic and well-made as can be expected, and would make any collector proud to display them on their shelf. The same can’t be said for their in-game counterparts. From afar, the models and animations look well enough, though, not spectacular. It’s when the in-game cutscenes bring the camera in close that you see the characters for what they really are. The character’ jagged and blurry edges look like something straight out of an early Xbox 360 game.

What sets the Disney Infinity franchise apart from other games in the toys-to-life category is the Toy Box–a creator’s safe haven for building, demolishing and playing ‘til their hearts content. For seasoned Toy box vets, everything is found the way they left it; this time around, there’s just more of it. For those new to the franchise, jumping in and placing a few blocks or creatures sporadically is easy enough, but building anything substantial involves diving into a convoluted and overwhelming tool set. The camera has a janky 8-point pivot, lacking the subtlety needed to place pieces in precise locations. To insert items into the Toy Box, you must cycle through pages of items to find what you’re looking for. If after you place it, you want to move or delete it, you have to go into a separate “spark mode” to access the “move” and/or “delete” functionality. It’s a tedious system that requires too many complicated steps to accomplish simple tasks.

Also included in the box are two power discs that are new to the series. Each is a Toy Box game. Assault on Asgard is a simple tower defense game where you place varying turrets and mines to help you resist waves of marching enemies. Escape from Klyn is a set of mini, randomly-generated dungeons that you run the selected Avenger through until you eradicate all the villains within the level. At the onset of the dungeon, you pick up a sidekick that can be used to solve very simple puzzles and help you in combat. Throughout the dungeons, there are not-so-hidden chests that hold gear to upgrade your sidekick when you get back to base. It was the most enjoyable mode in the game, but didn’t hold my attention for more than a few minutes.

Disney Infinity is not a good game. Much of its success will depend on the commitment and efforts of the imaginative Disney community, and whether or not they can continue to create levels along the lines of racing around the Good Morning America studios. If you’re someone who doesn’t mind a steep learning curve in order to create and share levels with the Toy Box community, a child that wants nothing more than to hit the same bad guys over and over with your favorite Avenger, or a collector who would gladly spend a pretty penny on dozens of Disney and Marvel figurines; Disney Infinity: Marvel Super Heroes 2.0 might just be for you. For everyone else, spend your holiday cash elsewhere this year.

Disney Infinity: Marvel Super Heroes 2.0 feels like a failed attempt at rushing a game out to cash in on a trending genre, that ultimately suffers from too little development time and polish.