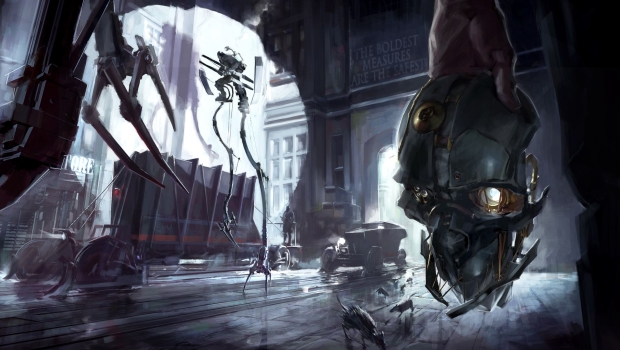 Dishonored was one of those games that caught us off guard. The sleek and obtuse retro-future steampunk/gaslamp aesthetic created a world that captured more than a few Game of the Year nominations, including our own. With incredible and varied gameplay, it was only a matter of time before Arkane and Bethesda hammered out a sequel. Well, before we get to that freshly-announced second installment, we also have an opportunity to check out Dishonored on current-gen platforms courtesy of Dishonored: Definitive Edition.

Materially, Dishonored: Definitive Edition (or DDE from now on) is simply the collection of the base product and all three DLC packages – The Dunwall City Trials, the Knife of Dunwall, and The Brigmore Witches. If you missed the opportunity to check out those bits of additional content, this is a chance to experience them in one easy package. There are also a few other nibbles of additional content present, but we’ll get to those. First, let’s talk about what’s new in the rebuilt texture department.

If you played Dishonored on the Xbox 360 or PlayStation 3, you’ll see a marked improvement in texture work here in the Definitive Edition. If you played DDE on the PC, however, you’ll likely find very little new under the sun. The framerate is locked at 30fps (an improvement over Xbox 360’s 20fps cutscenes), but the resolution has at least been bumped up to 1080p. The shadows are still jagged enough to take out an eye. On the plus side, the speaker on the controller is well-used, giving a disembodied voice of the Bone Charm-finding heart an outlet via the PlayStation 4’s DualShock speaker.

That isn’t to say the improvements aren’t a stark upgrade if you are jumping from previous to current gen. Draw distances are better, everything (except shadows) looks a lot more sharp, water still looks great, and there’s a little less fog (unless it’s supposed to be there) in the environment. The game does, at a glance, look much the same as the previous versions, though. Much of that comes courtesy of the obtuse art style. But, if you picked this up on the PC, it does mean that there’s little to look forward to here.

It was a shaving accident, I swear.

As part of the early pre-order bonanza, if you ordered from this outlet or that you earned yourself one of four early adopter bonuses, giving you three charms, and a few coins to clink together. The DDE grants you all four of these, giving you a whopping 12 Bone Charms and 2000 gold right out of the gate. In the long run it doesn’t unbalance the game horribly, but if this is your first interaction with Dishonored, it does wobble it a bit.

Much of the forward-push into the current gen yielded positive results, but I can’t say that about the load times. Dishonored is very much about experimentation. Facing combat, you can stop time, choke out an enemy, shoulder him, and vanish into thin air using Blink. Want to really impress your friends? Let an enemy fire at you, halt time, and then possess the foe, only to walk him in front of his own round. You could also silently choke out an enemy, sling him over your shoulder to teleport to the top of a bridge, and then toss his body into a force field to turn his corpse into ash. Just like paths and powers, there is a great deal of choice here. Unfortunately, with a 22-second load time, if you die trying to do all that fancy awesomeness, it can feel like forever, even when compared to the Xbox 360’s 15+ second load times.

The last bit of goodness comes for a select few. If you purchased Dishonored on the PlayStation 3 or Xbox 360, you’ll pick up this version for just $20 bucks, provided you stick to the same platform. On the other hand, if you picked up a physical copy, you are on the hook for the full $40.

Dishonored is an amazing game, and if you missed it on the previous go around, you need to pick it up immediately. The game is every bit as awesome as you’ve heard. While the move to PlayStation 4 and Xbox One isn’t a big leap forward, Dishonored is a game you should have in your library, Definitive Edition or otherwise.

Ron Burke is the Editor in Chief for Gaming Trend. Currently living in Fort Worth, Texas, Ron is an old-school gamer who enjoys CRPGs, action/adventure, platformers, music games, and has recently gotten into tabletop gaming. Ron is also a fourth degree black belt, with a Master's rank in Matsumura Seito Shōrin-ryū, Moo Duk Kwan Tang Soo Do, Universal Tang Soo Do Alliance, and International Tang Soo Do Federation. He also holds ranks in several other styles in his search to be a well-rounded fighter. Ron has been married to Gaming Trend Editor, Laura Burke, for 21 years. They have three dogs - Pazuzu (Irish Terrier), Atë, and Calliope (both Australian Kelpie/Pit Bull mixes).
Related Articles: Dishonored: Definitive Edition
Share
Tweet
Share
Submit