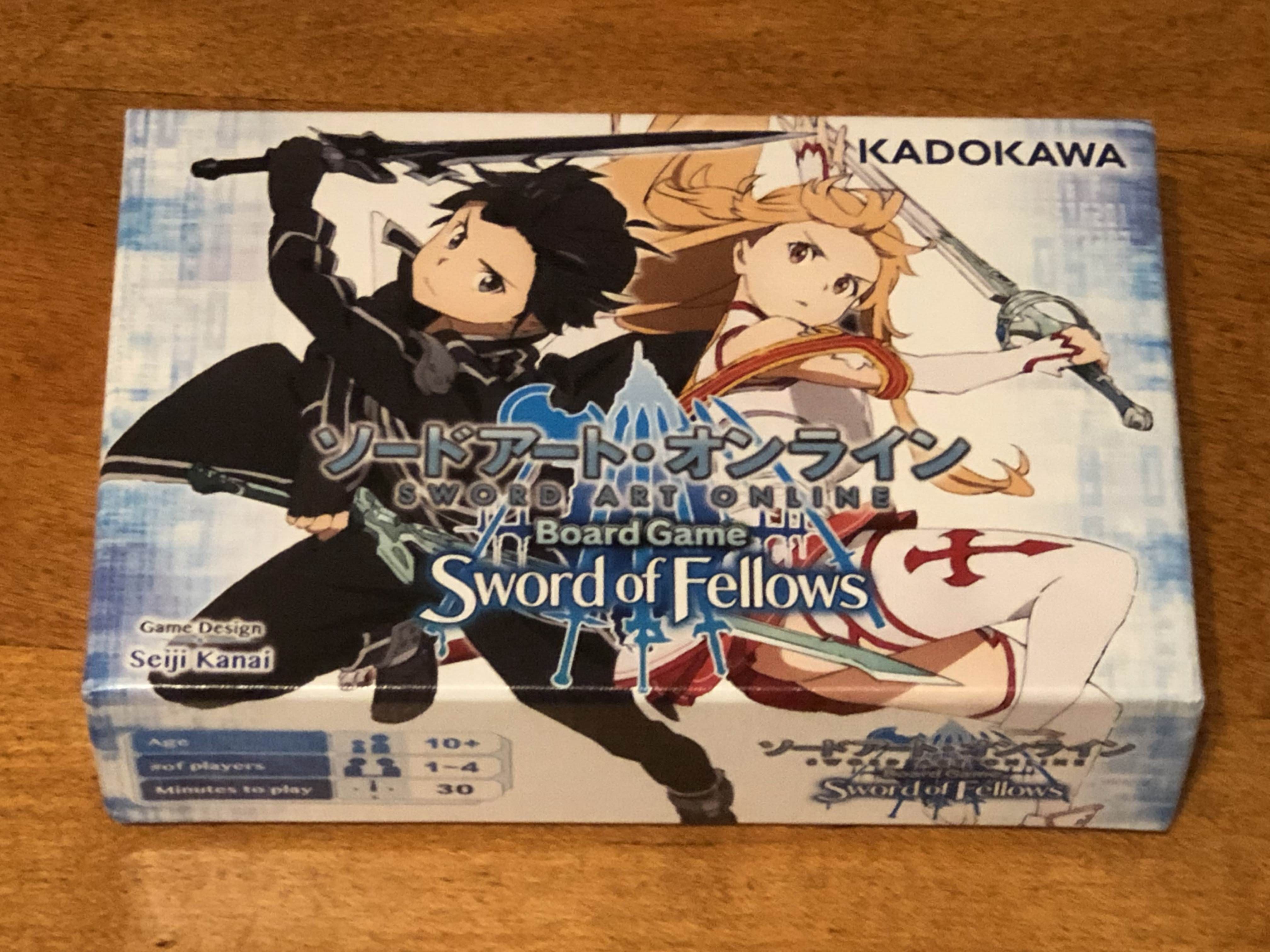 The Sword Art Online series is currently in its third season, with each season having wildly different plotlines. The first season seems to be the most memorable for fans though, with the story of Kirito and several other gamers trapped in the virtual reality land of Aincrad. Dying in the game meant dying in the real world, with brave adventurers leveling up in hopes of reaching the upper levels to end their captivity by defeating Heathcliff at Level 100. Sword Art Online: Sword of Fellows follows this storyline.

Opening the Sword of Fellows box reveals four black dice, four white dice, and six character dice. These dice have a nice weight to them, and the character dice with custom graphics to represent their character is a nice touch. Besides that, a token sheet for damage and ability and cards representing characters, scenarios, and items are included. These all feature artwork from the series. The box is rather small making the game easily portable, which is something I appreciate. 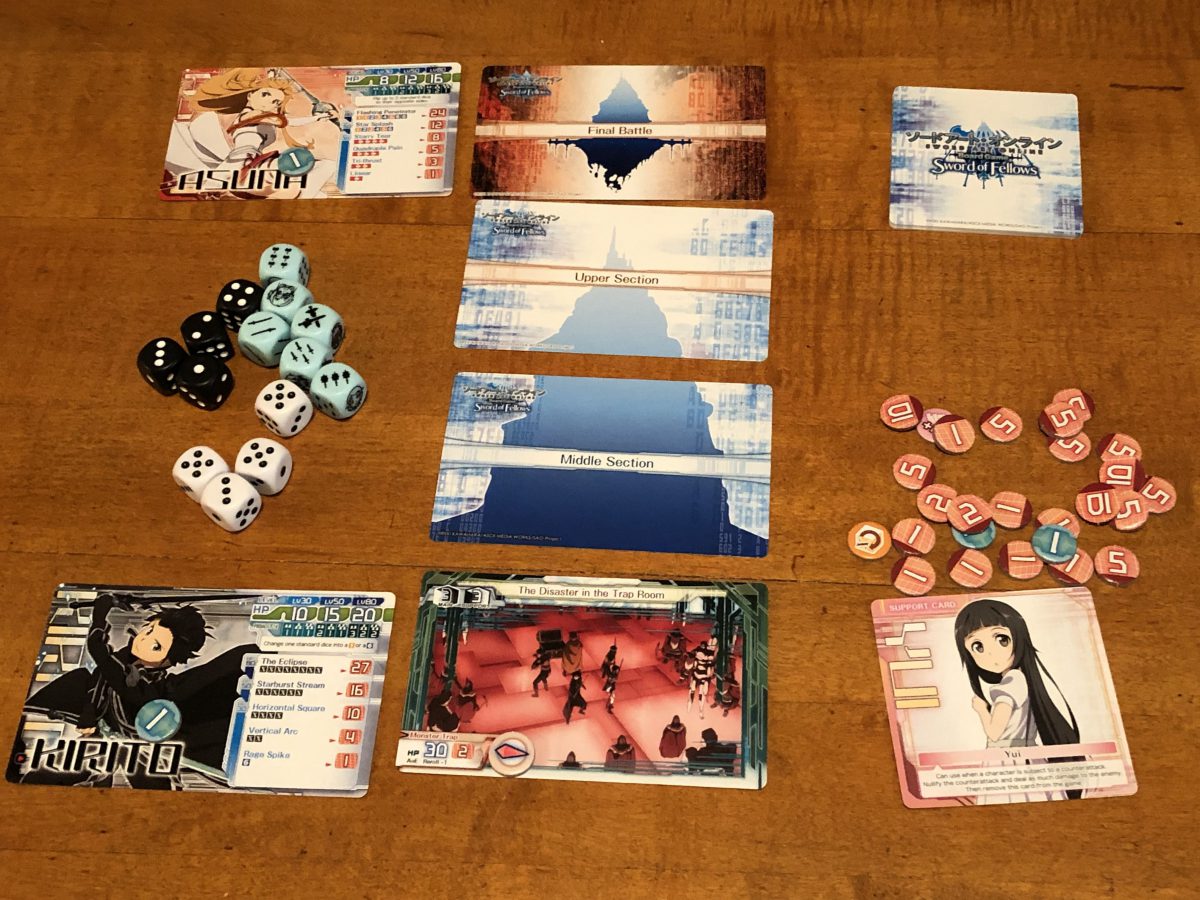 After each player selects a character, the scenario cards for the game are laid out. A scenario card from the lower, middle, and upper sections gets laid out with the card backs showing an image of Aincrad. The Final Battle goes at the top and is the same card. Finally, the item cards and tokens are set to the side.

Kirito begins the game and the lower section scenario gets flipped over. Each scenario card shows how many steps or objectives it has to get completed, the number of dice the main and support characters roll, how much damage each step can take before being defeated, the amount of damage a counter attack from that step deals, and any special effects applied to that step. To defeat the scenario, each step needs to be cleared in order. 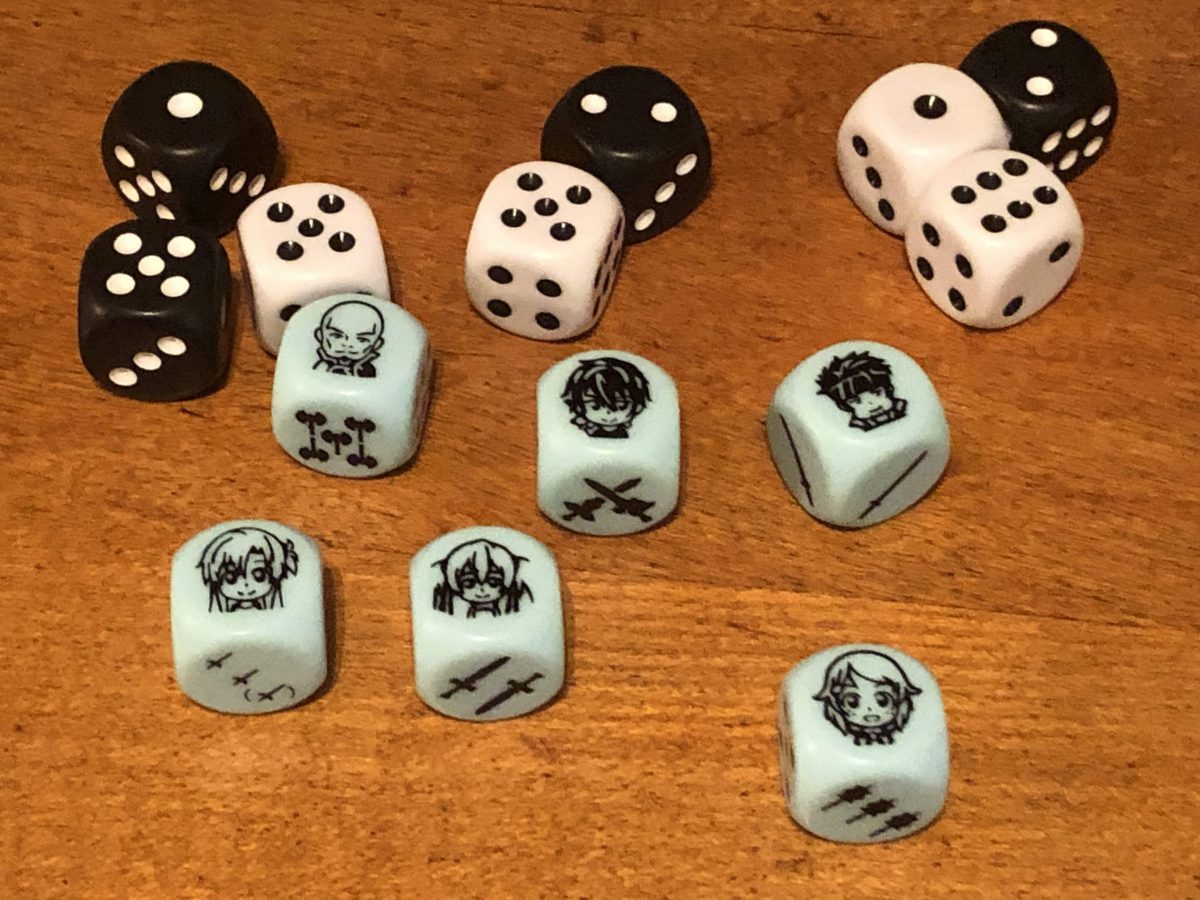 To clear each step, the main and support characters roll their dice and match them as closely as possible to the attacks of the main player. Similar to Yahtzee, dice can be rerolled up to two additional times. After the final dice roll damage gets applied to the step, a counter attack against the current character gets applied. These steps often have special effects, such as causing all characters to take damage and not allowing as many rerolls to take place. If a step has a defense on it, the defense is applied against each attack and not the total of the attacks levied. Each attack needs to be higher than the defense to cause damage.

During every turn, the players want to be able to include every die in the attack. When you do this, the combo allows the player to switch to the support player without having a counter attack hit against them. Some steps practically require switching to the support player without a counter attack due to the high amount of damage the step can deal. While there is some luck in the way the dice are rolled, segmenting the dice for attacks becomes the utmost importance, adding a sizeable amount of strategy. Each player does have a way to manipulate some of the dice, and the support character can also use their ability to help the main character, but that ability can only be used a specific number of times. 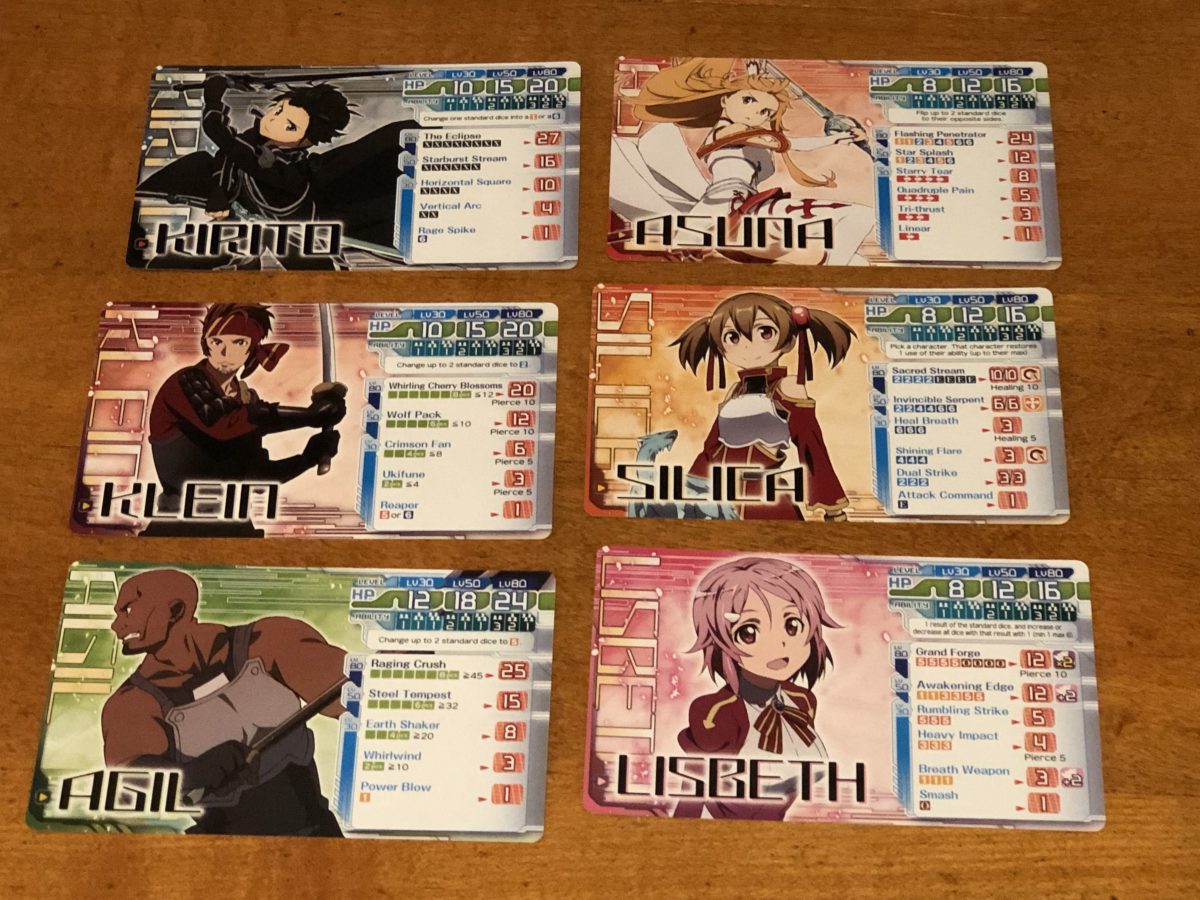 After a scenario is completed, an item is gained for the party, players gain more hit points, new sword skills become available, and all damage gets healed. Finishing the lower section scenario rewards the players with their character die. The progression helps to get into the scenario and ramp up the difficulty. The breather given is short lived, especially after seeing the abilities and special effects some scenarios have. Sometimes you don’t think that there’s any way to complete a scenario just looking at the abilities and hit points, but after some thinking about the scenario a strategy can be formulated.

The Final Battle, reached after completing the upper section, always has two steps. Heathcliff becomes the boss for the first step and needs to be killed. However, after Heathcliff is defeated, Akihiko Kayaba, the player behind the Heathcliff avatar, becomes the final boss. Kirito is the only character who can defeat Akihiko, but he has support characters that can take on damage until they are gone. While I understand the reasoning to change this to keep in line with the story of the anime, I wish that they could have used the same mechanics for defeating Akihiko as this takes away from the team helping out Kirito as they have throughout the entire game.

Sword of Fellows is a cooperative game, and like most cooperative games it is difficult. While this game is aimed at fans of the show, this could be a detriment for beginners or casual gamers. At least it plays in around a half-hour, so it won’t leave people frustrated for too long if they don’t like the difficulty, and the instructions do give a couple of suggestions to make the game easier. You also don’t need to be a fan of the show to understand the game, but fans of the series will appreciate the characters and references.

Sword of Fellows does a lot for a dice game. It keeps everyone involved, has ways to manipulate the dice, and gives a wide amount of variety in the number of characters and scenarios available to keep the game from becoming stale. The choice of which dice to reroll challenges players with each character. It's not the deepest game, but it's a great filler for those times when you are waiting for other people to arrive for a game night.

While not working as a Database Administrator, Keith Schleicher has been associated with Gaming Trend since 2003. While his love of video games started with the Telestar Alpha (a pong console with four different games), he trule started playing video games when he received the ill-fated TI-99/4A. While the Speech Synthesizer seemed to be the height of gaming, eventually a 286 AT computer running at 8/12 Hz and a CGA monitor would be his outlet for a while. Eventually he’d graduate to 386, 486, Pentium, and Athlon systems, building some of those systems while doing some hardware reviews and attending Comdex. With the release of the Dreamcast that started his conversion to the console world. Since then he has acquired an NES, SNES, PS2, PS3, PSP, GBA-SP, DS, Xbox, Xbox 360, Xbox One S, Gamecube, Wii, Switch, and Oculus Quest 2. While not playing video games he enjoys bowling, reading, playing board games, listening to music, and watching movies and TV. He originally hails from Wisconsin but is now living in Michigan with his wife and sons.
Related Articles: Sword Art Online: Sword of Fellows, Tabletop
Share
Tweet
Share
Submit