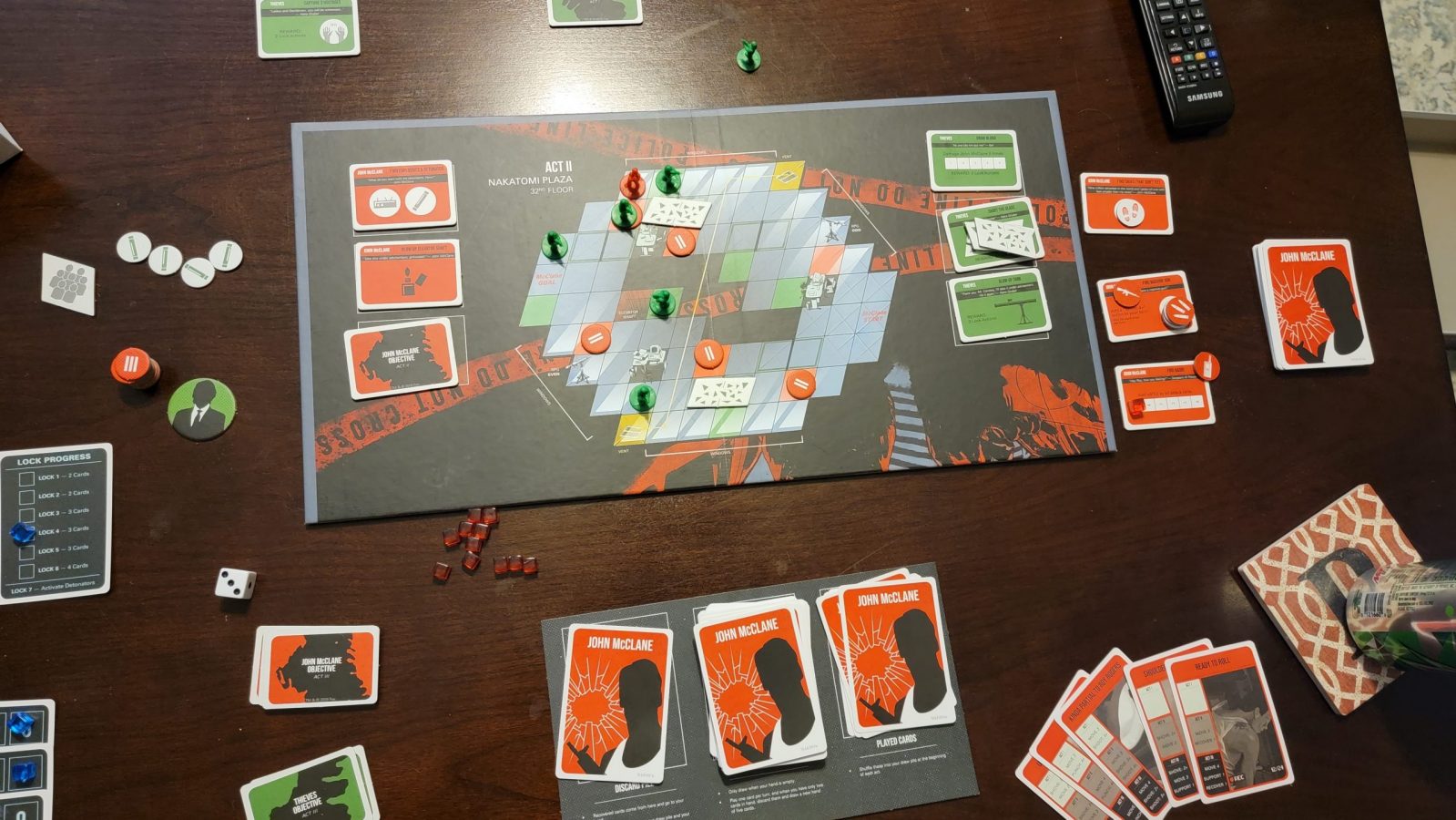 Die Hard is synonymous with action and is widely considered a classic with the property being found in nearly every medium available, from the original novel to an arcade classic and multiple console releases. But the question here is: how does Die Hard translate to a board game setting? The answer is surprisingly well. 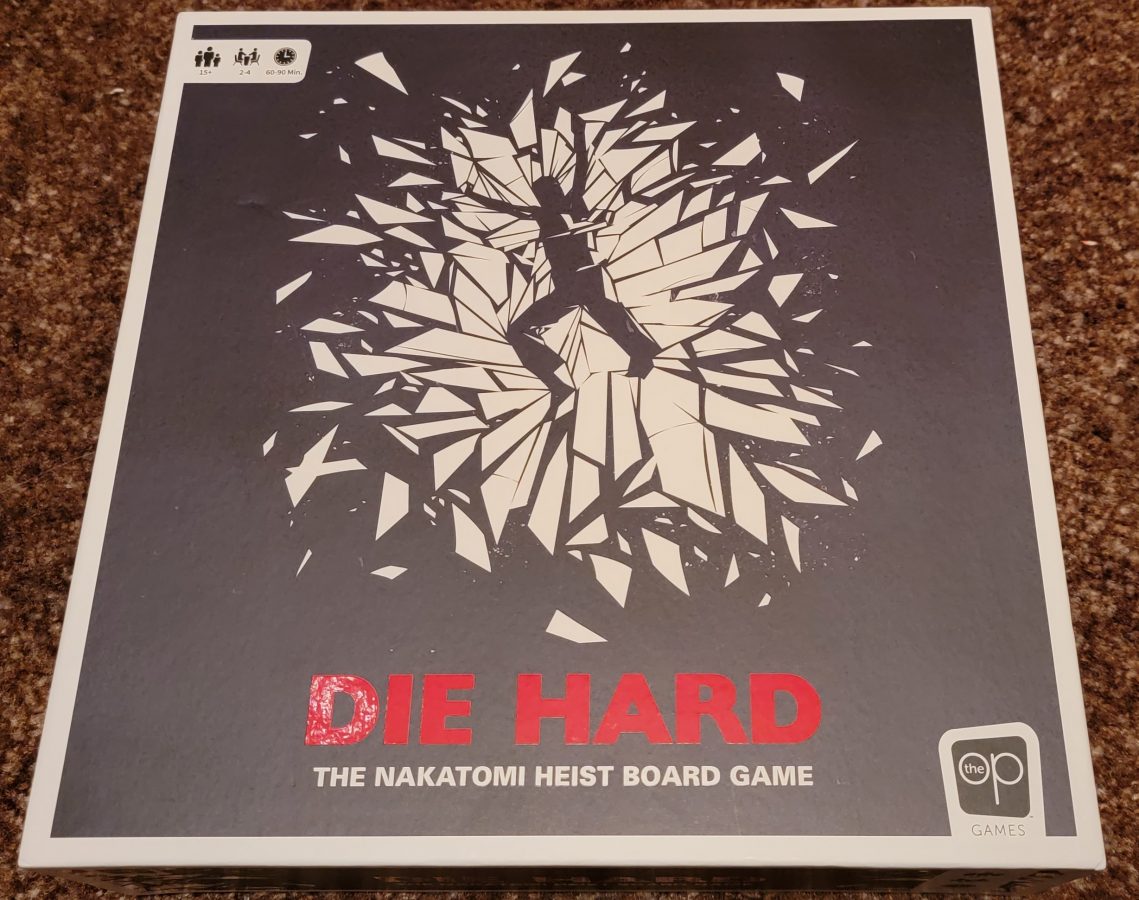 Die Hard: The Nakatomi Heist Board Game has one player take on the role of John McClane, complete with a set of mandatory tasks to fulfill ripped straight from the movie, while 1 to 3 other players take on the role of thieves – or Hans Gruber’s henchmen – who must work together to take down John McClane or break into a safe before McClane defeats Gruber.

Unlike McClane, the thieves do not have any mandatory tasks to accomplish – barring one at the very end of Act III – but do have optional tasks which speed up the safe cracking process. But let’s backtrack and explain the layout of the game.

The Die Hard game board is highly unique as it is made to expand as you progress and features 3 separate boards to explore, one for each Act of the game. The three game Acts closely follow the movie and have the individual playing as John McClane recreate many of the movie’s iconic set pieces, such as blowing up the elevator shaft, while the thieves work feverishly to crack a safe and win. 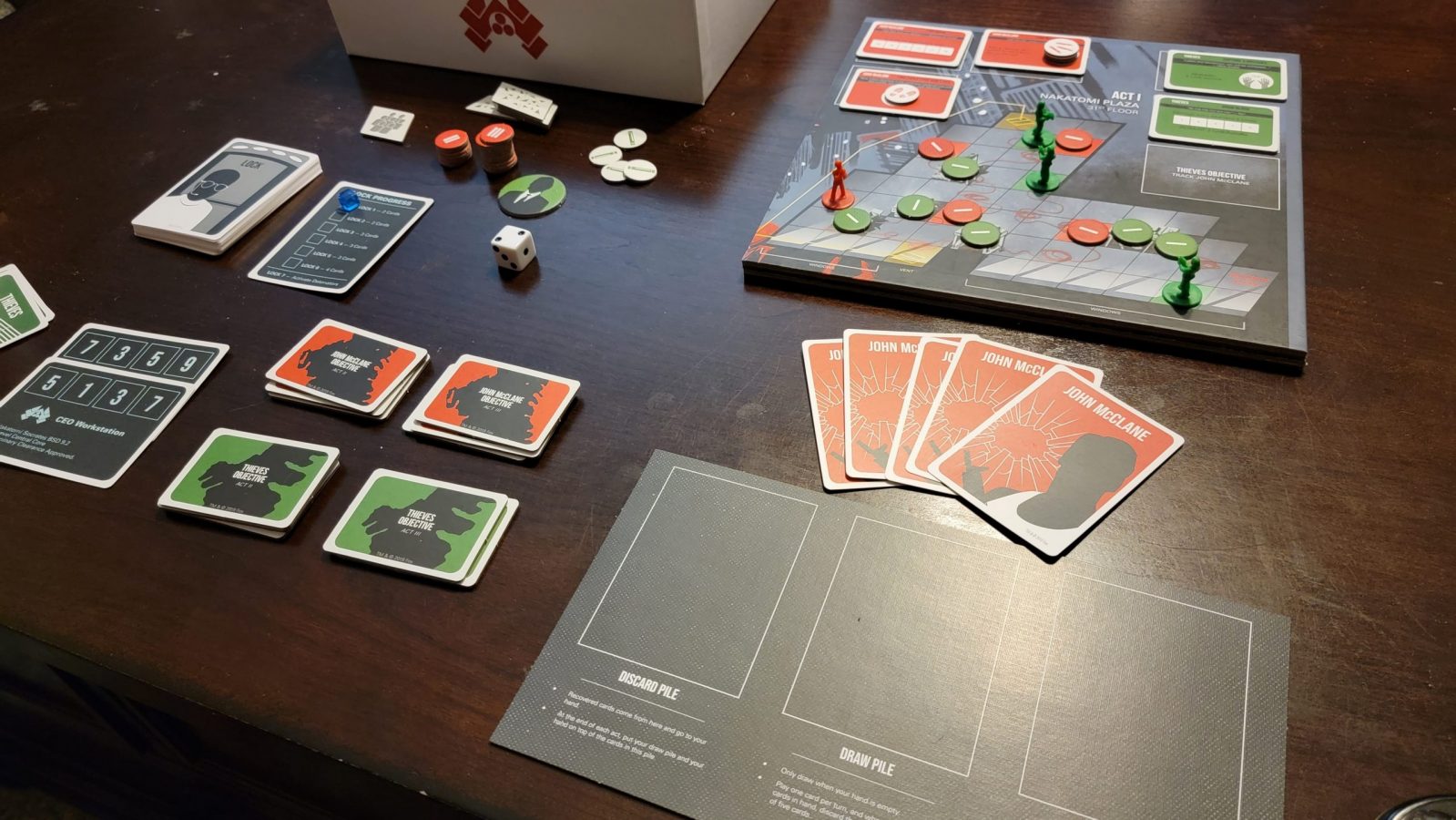 The game can be won by the thieves during any Act, but can only be won by John McClane by defeating Hans Gruber at the end of Act III. Overall, the game is stacked against the player inhabiting McClane, as the thieves nearly always have the upper hand – and rightly so, as they did in the movie – forcing McClane to carve out his own path to victory. Thankfully, McClane is given a few tricks to help even the odds during the later Acts.

Set up is simple: at the beginning of each act you lay out cards which explain both McClane’s and the thieves’ goals. You then place McClane on his starting space and place color-coded tokens around the board which will help both McClane and the thieves complete their goals. Finally, you place the thieves on their respective green spaces. All plays are determined by cards, of which McClane has a pile filled with actions which can be taken – and which vary depending on which Act the game is in – while the thieves cards allow them to not only take actions, but to also work on cracking a safe.

The safe is determined by placing two cards on the board, each bearing four numbers. The thieves will always draw three cards and lay them on the board in numerical order, determined by the numbers in the top left corner of each card. The left and right cards provide the thieves with the numbers they are allowed to attempt to break the safe with, but they can only unlock one number per turn unless the two numbers they have happen to appear adjacently. The middle card determines the actions the Thieves can take. Each time the safe is cracked the thieves must then move on to a larger safe, eventually having to lay out four safe cards at once for a total of 16 numbers to crack. 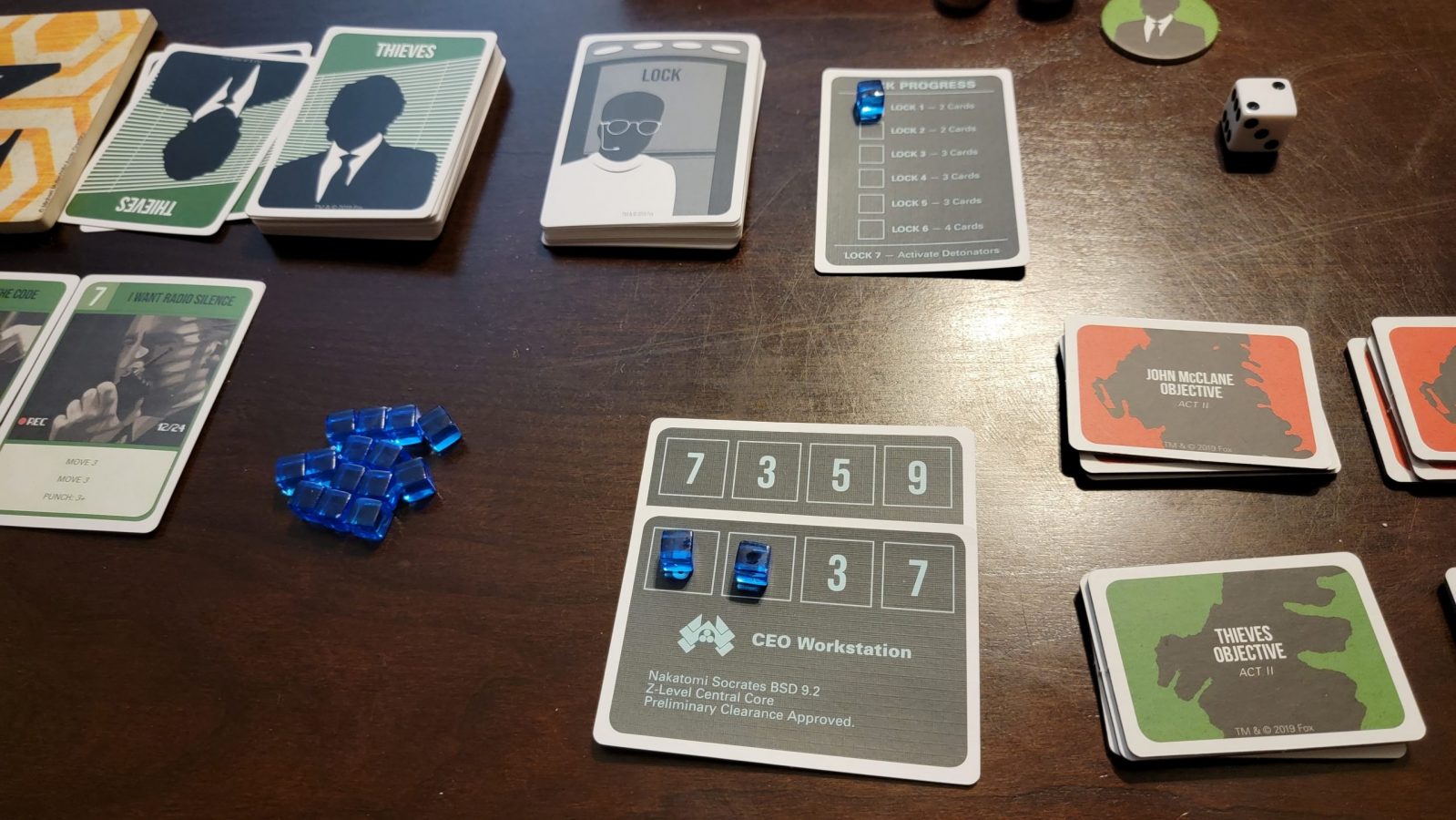 Actions for both the thieves and McClane involve either moving, shoving, shooting, punching, sneaking, or reclaiming. When a card states Move, it will provide you with the number of steps you are allowed to progress (Ex: Move 3). During movement your goal is to reach the tokens on the board and find the items necessary to complete your goals. Cards that state Shoot, Punch, or Shove will be followed by a number (Ex: Shoot 4, Punch 3), and in order to perform that particular action you must roll a die and land on either that number or above. If McClane shoots or punches a thief, then they are removed from the game board. Shoving merely moves the thief one space in the direction of McClane’s choice. If a thief punches or shoots McClane, then they place a token on a Blood Drawn card. Enough tokens on this card and the thieves receive two free numbers to unlock on their safe. Thieves can forgo using their middle card for a turn in order to bring back a fallen thief.  Reclaim allows McClane to reclaim one card that had been lost due to a thief attack or board hazard.

All other optional goals for the thieves result in free unlocks to the safe and completing these goals is the surest way to win before McClane can reach the end of Act III. McClane can also lose by running out of cards from his draw pile, but in my playthroughs that never came close to being an issue. McClane can only progress to the next act by finding the required items and completing the tasks required, after which he can head toward the goal space on the board. Once he reaches the goal the board will then be cleaned off, opened up to unveil the next Act, and new goal cards and tokens -as well as more enemies and obstacles -will be placed on the board.

From the outside the game looks highly complicated and stressful, but looks can be deceiving. Die Hard plays quickly once the rules are learned and is highly strategic and competitive without being too taxing on those playing. McClane will rush to take down enemies and complete goals, while the thieves will work together to block his path and essentially just give him a hard time. It’s great fun. 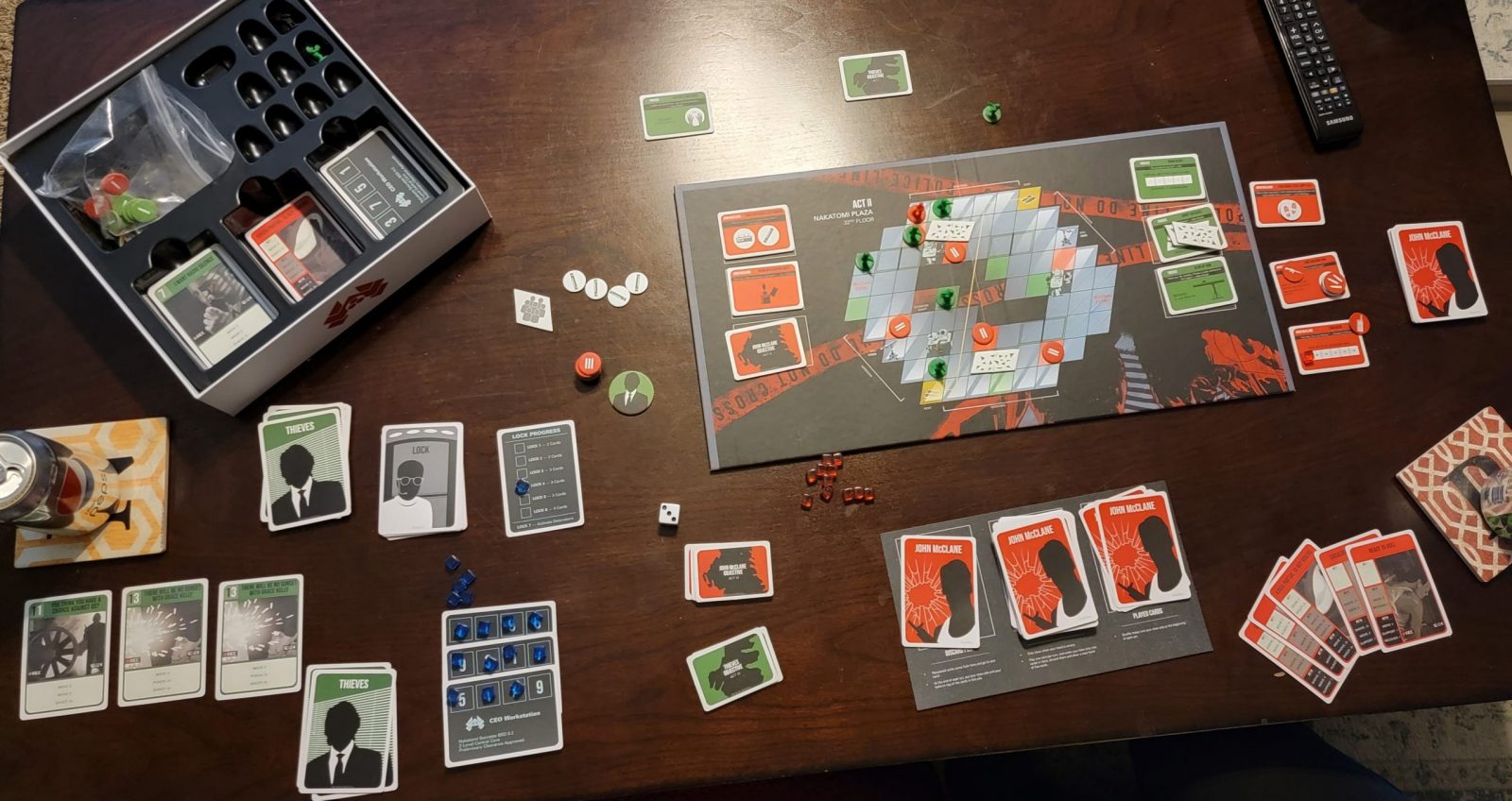 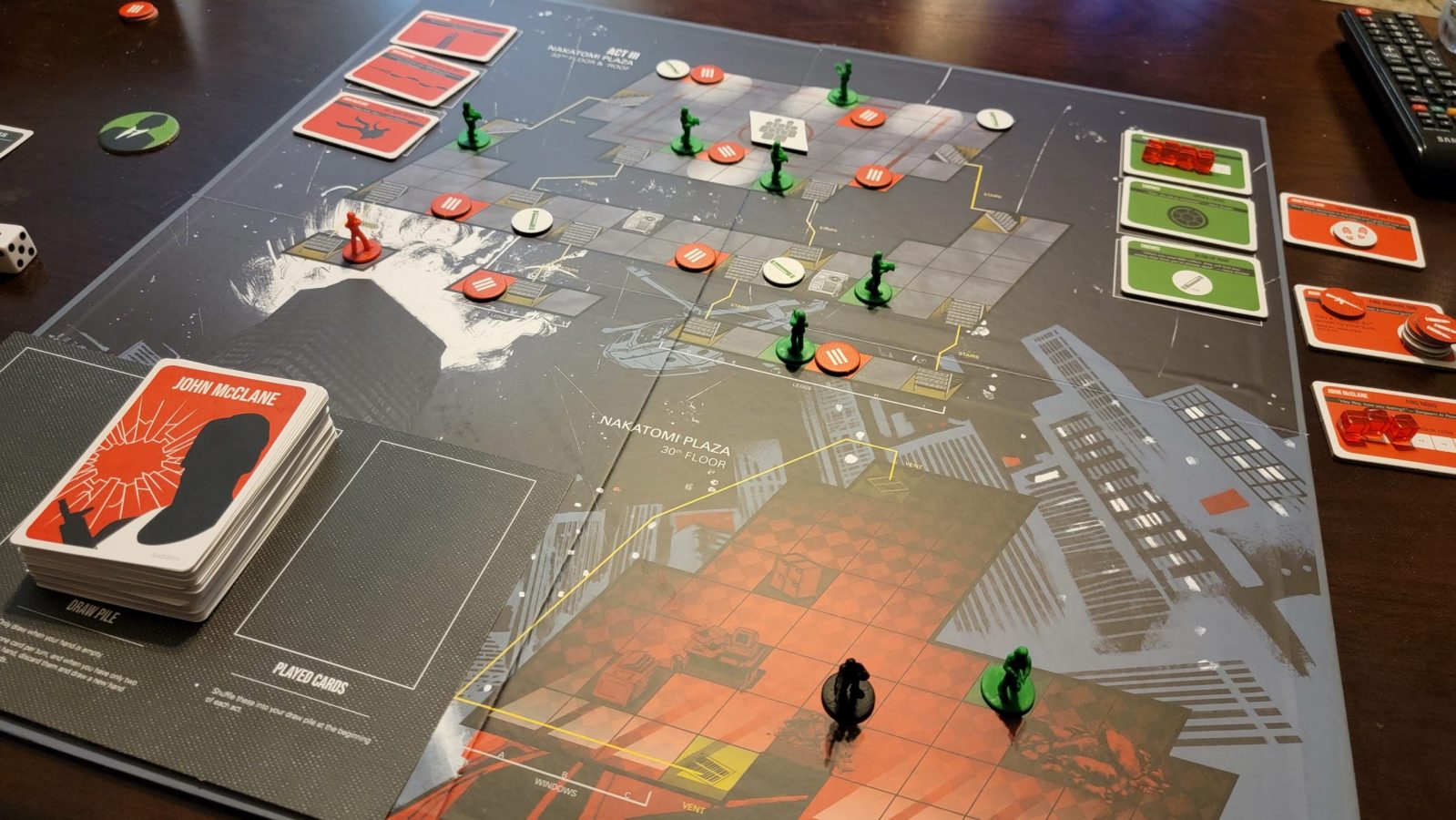 I don’t want to waste too much time explaining the rules, because those can be found anywhere. The main question in a game review is – is the game fun? And that answer is a resounding yes. Die Hard: The Nakatomi Heist Board Game is the perfect game for a night in with a group of friends. I would say  that the game falls into the intermediate level in terms of difficulty, so it’s harder than your average classic board game like Clue, Monopoly, etc but isn’t so complicated you’ll spend all night attempting to decipher the rules. I believe any group with a good two hours or so on their hands should be able to fully complete a game, even for a first playthrough.

The board and figures are all nice, although neither is incredibly detailed. Don’t expect minifigs which can be painted, as what you receive are color-coded plastic figures with no real details and a board which more than serves its purpose – and holds three Acts on one fold-out board – but won’t wow you with any intricate illustrations. The cards are a bit livelier, showing scenes and quotes from the movie and are made of good card stock, especially the Act goal cards which are thick and made well so as to easily be used throughout multiple playthroughs without fear of damage. The components may be slightly lacking, but do provide what is needed to play the game without issues.

I’ll admit that I had my doubts that Die Hard would translate to a board game setting, but I was quickly proven wrong. Die Hard: The Nakatomi Heist Board Game is a love letter to the action classic, while also providing a surprisingly well thought out adventure that is fun for two to four players. My only gripe is with the generic plastic figures and somewhat plain game board; while they adequately serve their purpose, I think most people would gladly pay more for more detailed components. That said, I highly recommend adding Die Hard to your game night rotation.

Richard Allen is a freelance writer and contributing editor for various publications. When not writing for Gaming Trend you can find him covering theatre for Broadway World, movies and TV for Fandomize, or working on original stories. An avid retro gamer, he is overly obsessed with Dragon's Lair. Chat with him via @thricetheartist on Twitter and @richardallenwrites on Facebook and Instagram.
Related Articles: Die Hard: The Nakatomi Heist Board Game, Tabletop
Share
Tweet
Share
Submit