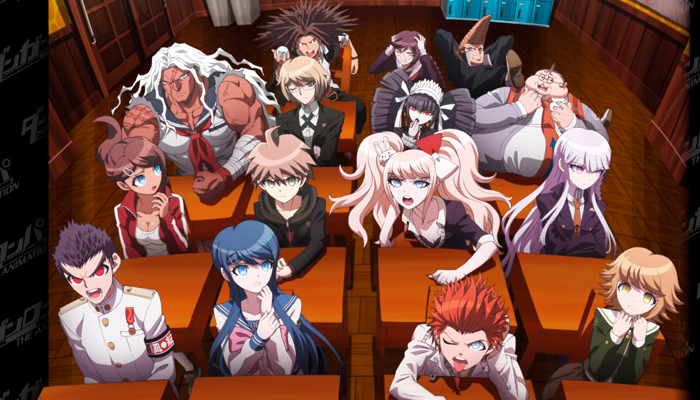 Danganronpa’s story is one that should, in theory, lend itself to an animated adaptation. Even without the investigations and trials to partake in, the core of the story Spike Chunsoft tells is riveting, and one that could be emulated in an episodic series for those without the time to play through a 25-30 hour visual novel.

But where Lerche’s adaptation fails is in its decision to condense this elaborate and multifaceted battle between hope and despair into a measly thirteen 25-minute-long episodes. What could have been a worthwhile recreation of an incredible story is ultimately a subpar imitation of the source material, one that undermines a fantastic and terrifying tale for laughs and in the interest of time.

Danganronpa: The Animation follows the lives of fifteen high school students attending Hope’s Peak Academy. This prestigious school is only open to those who are the best in their field. In other words, these students are the “Ultimate” at whatever they do. Some characters seen include the Ultimate Baseball Player, the Ultimate Gambler, and the Ultimate Programmer. Among them is one “normal” student, protagonist Makoto Naegi. Makoto made his way into Hope’s Peak by chance as part of a raffle, earning the title of Ultimate Lucky Student.

Upon arriving at Hope’s Peak, each of these Ultimate students finds themselves in a horrifying situation orchestrated by a maniacal teddy bear named Monokuma. These fifteen students are locked away in Hope’s Peak, and told that they can only leave if they can get away with the murder of one of their classmates. If one of these kids are found dead inside the school, those that have survived must investigate the crime scene and correctly unmask the murderer, or else face their own demise while the perpetrator gets to escape into the world beyond Hope’s Peak’s walls.

Danganronpa’s premise is still a fascinating and horrifying one. As these students begin to fall into despair and resort to killing their friends to break free of Monokuma’s clutches, it’s apparent that these kids are still good people, but they’ve been backed into a corner by a sociopathic mastermind. Hope and despair intermingle as the hope of escape brings about despair at the loss of a friend. There’s so many shades of gray and with each death, the secrets of Hope’s Peak begin to unravel to reveal a story that is engrossing and poignant.

Unfortunately, almost none of that depth is seen in Danganronpa: The Animation. Entire chapters of the game are condensed into mere minutes of screen time, robbing the story of some of its most powerful moments. Characters’ personalities are only given the briefest of chances to shine, and revelations are unveiled so casually that they have no chance of carrying the same impact they did in the visual novel.

With Japanese voice acting, Danganronpa: The Animation is a disappointingly brief summary of an otherwise captivating story, but Funimation’s handling of the English dub is where the treatment of this story comes off as negligent and disrespectful rather than just substandard.

With the exception of Bryce Papenbrook, who reprises his role as Makoto from the Danganronpa games, the other students in Hope’s Peak have new voice actors behind them. The abridged nature of Danganronpa: The Animation is all the more apparent as Funimation’s direction for these actors is clearly one fueled entirely by the show rather than the game it spawned from. Characters come off as caricatures of themselves rather than the layered people they are, lines during key moments in the story are changed to make the darkest moments humorous, and translations are handled so carelessly that it contradicts the story at large.

The difference in voice acting direction is most evident with Makoto, whose meek and polite nature has been replaced by a scrappy and argumentative attitude. Just how differently the same actor portrays the same character shows how opposed the direction between The Animation and NIS America’s dubs of the game is, and it also shows how far out of line these characters are.

[Major spoilers for Danganronpa below]

Each character suffers to varying degrees from this recasting and poor direction, but the greatest victim is the mastermind behind this killing game and the one controlling Monokuma: Junko Enoshima. Junko’s status as the Ultimate Fashionista has her set up as a preppy, popular school girl, only to subvert that expectation by being the mastermind of all the suffering in Hope’s Peak Academy. However, Funimation portrays her as a valley girl parody, even as she’s changing personas on the fly. A previously unnerving and enthralling villain is reduced to a grating joke due to a direction that’s inconsistent with the character.

The Animation’s treatment of Danganronpa is one indicative of neglect. A game that lasts more than 20 hours has been condensed into something only a fraction of that time, and it means that no character, moment, or message gets the time it deserves. This is only made more apparent by the poorly written and directed translation that needlessly contradicts established characterization and lore.

Let’s hope that if Danganronpa 2: Goodbye Despair gets an anime adaptation that NIS America can step in.

A well-handled adaptation of Danganronpa could have been good enough to give those without access to the game a way to experience an excellent story, but The Animation feels like a rushed cash-in without any concern for preserving the source material. Buy a Vita and play Danganronpa.