It’s 2091, the ruling class of the city’s underbelly has taken over, and you are nothing but a pawn being used as a toy. While many of us have been biding our time for a different cyberpunk game that’s in the works by playing others in the genre, I can reassure you that Ruiner will undoubtedly feed some of that need. While this is a top-down shooter, Ruiner doesn’t lack in telling a deep story while you blast your way to the top of a criminal organization looking for answers. Things will get dicey as you try and decipher who is friend or foe, and you’ll quickly find that none of that matters. The only thing that matters is that you’ve got a gun. With its bright neon lights, gritty undertone, and decent world building aspects, it’s hard not to get pulled into this dark world.

To give you a quick rundown, you play as a mysterious man trying to find your kidnapped brother, and like all people in a cyberpunk world of the future, you have been fitted with cyber-enhancements that will aid you. Your head, another cyber-enhancement, has been hacked by a mysterious person who not only manipulates you, but helps you on your path to finding your brother. While the game is driven by a story that continuously throws you into the deep end and forces you to fight your way out, it’s the gameplay and fast action that takes center stage, giving you guns, guns, and more guns to mow down countless gang members. 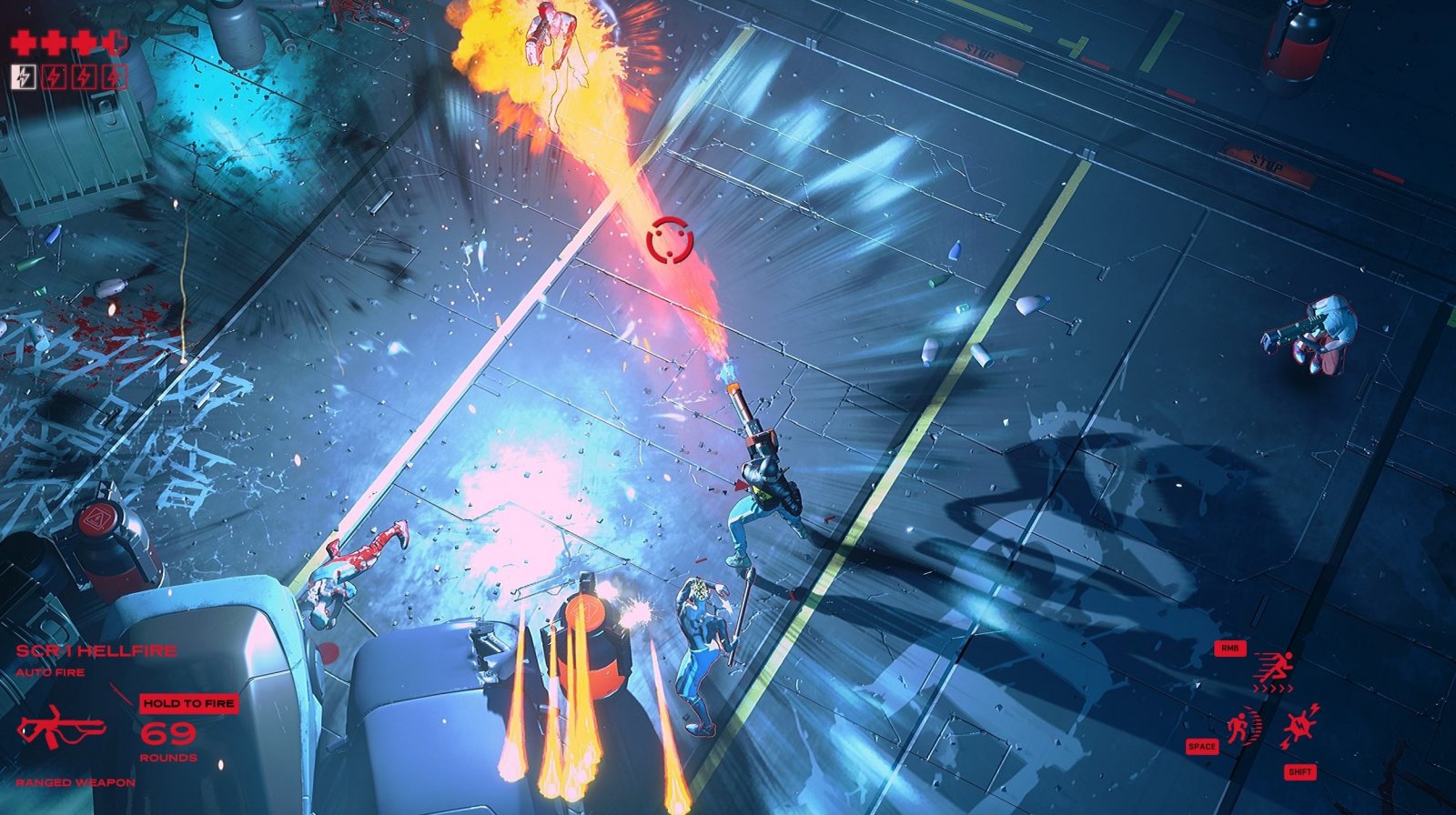 A gun for any situation

The design of the world is nothing short of fitting, as the world around you feels aged and rebuilt in a punkish sort of style. While most encounters with enemies occur in buildings, sectioned-off locations meant for you to clear in order to proceed, and dark, uninhabited places, it’s the world outside of these areas that’s interesting. There are night clubs, raves, parties, and businesses that operate in the shadows, bustling and thriving as you take to the streets. There are NPCs hanging out, conversing with one another, bargaining in business, and haggling you as you walk by, creating the sense of a living and thriving world around you.

Though many of my encounters with NPCs offered nothing but useless banter on their part, I enjoyed knowing that the world around me was just as chaotic as the one I was fighting in. The level design is dark and gloomy, lending itself to the cyberpunk world, but many of the locations look the same, and as you progress, don’t offer much in the sense of something new. Where the game makes up for this is with its difficulty and different approaches to gameplay. Boobytraps set up to trigger a series of connected bombs, rocket launchers that shoot you once in range, and even areas that require you to press the A, B, X, and Y buttons in a correct sequence or you’ll receive a hefty shock, are all dangers that tie into making each level feel and play different. 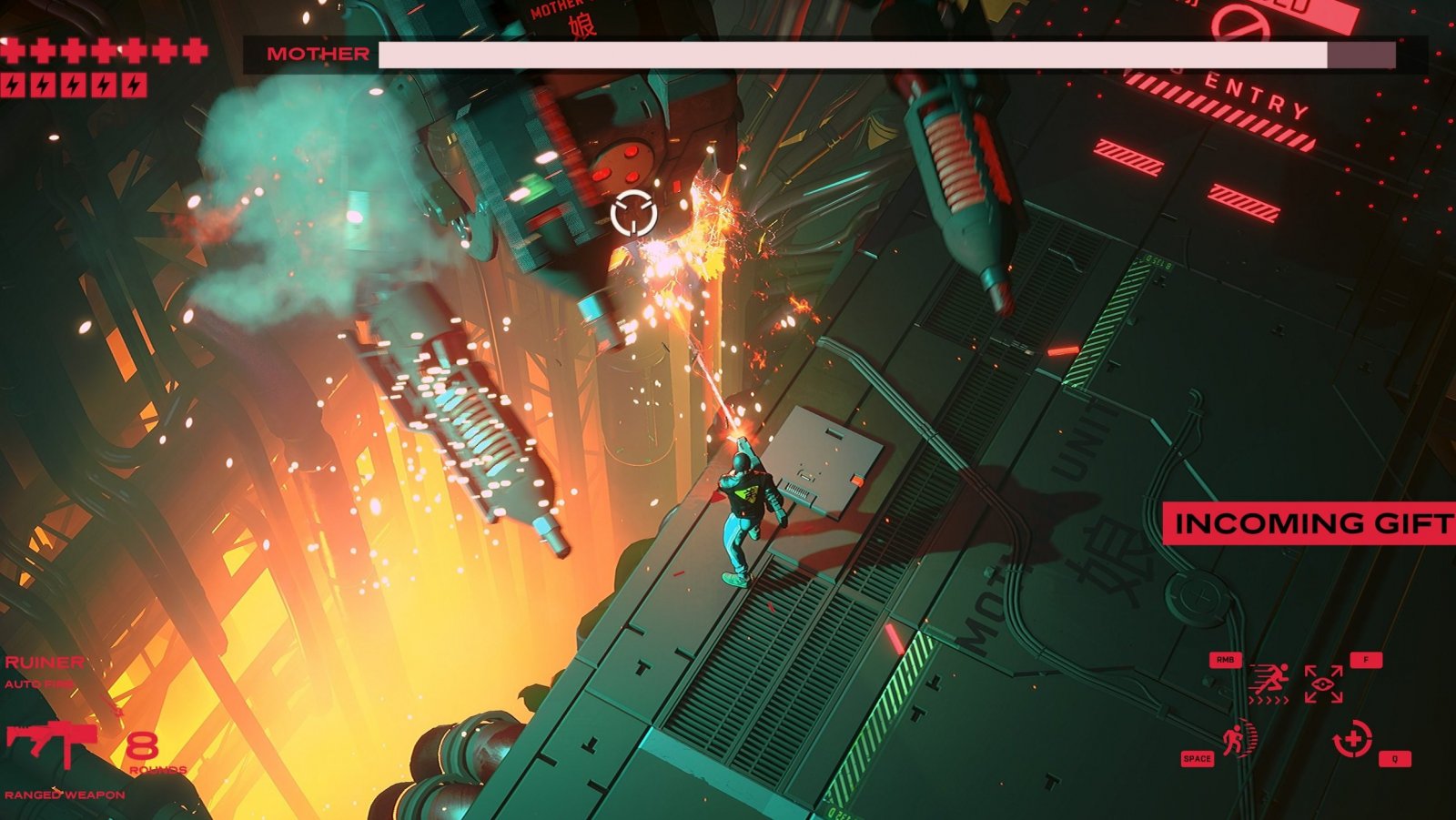 As I previously stated, Ruiner is all about fast action and guns. Think Hotline Miami and Akane but set in a cyberpunk world. Much of the combat takes place in short skirmishes with gang members that try to slow you down from reaching their boss, who, in fitting fashion, awaits you at the end of the level with a smile. You’ll be armed with a melee weapon and a gun, and both can be swapped out with the many weapons that will be at your disposal from killing enemies and from hidden caches. With the early stage being used as a quick tutorial of how to run and gun and dash, you’ll soon feel a bit outgunned. Because you are constantly being overwhelmed by bad guys who charge at you with melee weapons and shoot from across the level with ranged weapons, you’ll find that the key to survival is all about positioning so that your back is never open.

I quickly found that dying is a part of the game, and it’s all about applying what you’ve learned from previous battles. Instead of using a shotgun to take out enemies running at you, you might want to swap to a machine gun so that you can kill them before they get too close. Each gun you pick up has a limited amount of ammo, but your standard issue gun has unlimited ammo. What I loved most about each gun was that each packed a punch when fired. From the flamethrower to the rocket launcher, each had a unique feel. It may take a moment to adjust to the speed in which everything occurs, but when you do, it’s as smooth as butter. Personally, I had to increase my sensitivity to 90 because of the rate in which enemies and gunfire came at me. 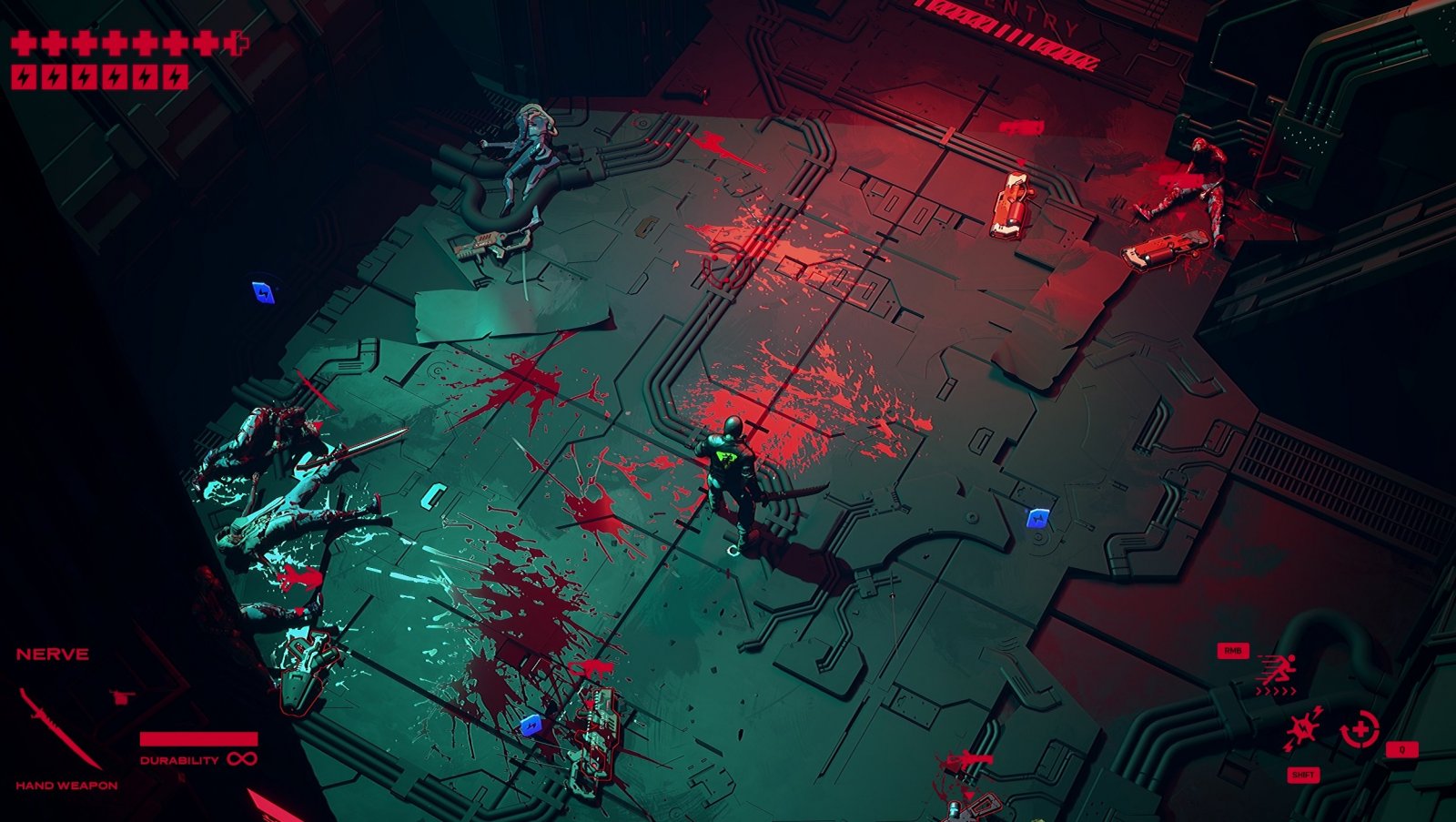 As you follow leads to find your brother, you’ll earn Karma points that will be used to level up your character and his abilities. You’ll also have access to a skill tree that has plenty of options that will change the way you play. For myself, because enemies were constantly bombarding me from afar with bum-rushing, I always chose to upgrade the dash ability to put space between myself and the enemy. But with options like stagger, frag throwing, shields, and other offensive and defensive upgrades, you can tailor your character as you see fit.

Not all was perfect with the game. Because of the pace of the game and needing to always be on your toes, the controls on the Switch never felt natural. With the left stick used to move, the right stick used to aim, and ZR button used to shoot, it would have felt more natural to have the right thumbstick as the firing button, similar to how most dungeon crawler games map theirs. There were moments when text boxes were stuck on-screen, blocking out important information, and the only way to dismiss it was to quit and restart. Unfortunately, this happened to me three times, which is more than enough to frustrate any gamer.

Ruiner is a cyberpunk-style, guns blazing, top-down shooter that pulls no punches when it comes to action. Where the levels lack depth and unique flair, the gameplay makes up for it with a diverse of ways to approach playing.

T.K. is a freelance writer, narrative designer, and author. Writing and developing narratives and giving voices to digital world and characters is his passion. As a game writer, QA game analyst, and editor for Gaming Trend, he enjoys being a part of the gaming industry.
Related Articles: Ruiner
Share
Tweet
Share
Submit